Algeria is a huge country roughly almost 4 times the size of France. MiG-31 is necessity for Algeria by my opinion.
Werewolf

Viktor wrote:Algeria is a huge country roughly almost 4 times the size of France. MiG-31 is necessity for Algeria by my opinion.

I think too, that Algeria's best compromise is to have MiG-31's. They have a lot of air gaps not protected by Radars and SAM's and would cost far more if they would try to close them with ground based radars and SAM batteries. The country actually is quite large in comperision with lot others and the military budget is rather tight, so a fast moving interceptor is good compromise for covering their airspace from intruders without crippling their budget with SAM batteries they could not afford in sufficient numbers to cover all that space.
medo

Algeria have Su-30MKA fighters, so I don't think Algeria need MiG-31 fighters. Su-30MKA is enough for their needs.
flamming_python

Algeria is mostly desert, with only sparse infrastructure to the South. The vast majority of the country's industry, infastructure and population is concentrated near the Mediterranean coast.

However, in order to police the entirety of their airspace and target intruders immediately - MiG-31s are a must as air defense vehicles patrolling all that desert is not all that practical.
Honesroc

"In 2015, Joint Stock Company (OAO in Russian) NAZ, “Sokol” is planning a greater increase in capacity for overhauling and modernizing the MiG-31 aircraft. This was reported by the company’s press-service.

“The latest contract with the Russian MoD which was signed in December 2014, allows for substantial deliveries up to 2018. Already in this year capacity has doubled in comparison with last year. The agreed terms of the contract, the factory will work on the extension (I believe mid-life upgrade is the best translation) and install new avionics which will expand the combat capabilities of the aircraft. In connection with the large amount of work and the rigid timetable of the contract, plant #514 was assigned the work. This is the main contractor of the OAK contract,” said the factory’s report." 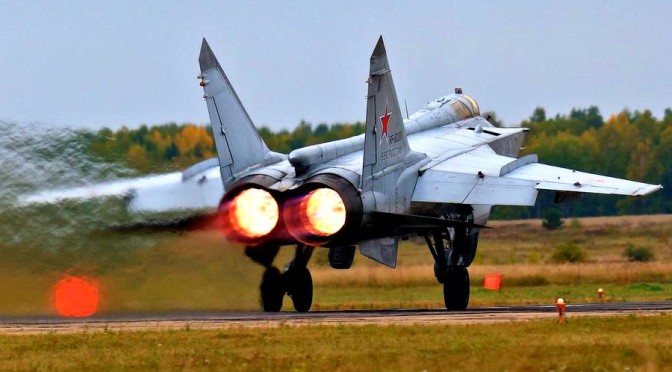 Fighter-interceptor MiG-31 will be upgraded in 2015

"Last year it was decided to upgrade the additional amount fleet of MiG-31. Bulk of the work must be carried out in 2015, "- said Shoigu at a conference in the Defense Ministry.

According to him, this will increase the group of fighters to intercept long-range missile-all directions.

Fighter-interceptor MiG-31 is designed to intercept and destroy airborne targets at extremely small, small, medium and high altitudes, in simple and adverse weather conditions. Capable of speeds over Mach 2 (speed of sound). Is equipped with an in-flight refueling. In 2014, as part of the exercises in the Arctic interceptors made several refueling in the air from air tankers and successfully completed the task in the northern expanses. The aircraft enables you to control other aircraft in the air.

In December 2014 the Russian Defense Ministry signed a contract with "United Aircraft Corporation" for the repair and modernization of the MiG-31. In accordance with the terms of the contract before the end of 2018 the Armed Forces will be supplied with more than 50 modernized MiG-31BM. The amount of the contract exceeds 30 billion rubles.
magnumcromagnon

...Obviously it's never been attempted by anyone else before and most certainly not by the fighter plane that's in your avatar.

"The flight-tactical exercise with the crews of MiG-31 fighter-interceptors was launched in the Perm Region at the Sokol Airbase. In the coming days, two squads of aircraft will be redeployed to the Monchegorsk airport (Murmansk Region), making a flight distance of 1,500 kilometers (932 miles). The flights to intercept 'enemy' missiles and aircraft will take place from there," the Russian Defense Ministry said in a statement.

According to the statement, the pilots will hold drills until March 6, using air-to-air missiles.

On Wednesday, Russia's Defense Minister Sergei Shoigu said that Russia does not rule out the possibility of protecting its national interests in the Arctic region by military means.

Russia's revised military doctrine, signed by President Vladimir Putin in December 2014, named the protection of national interests in the Arctic among the main priorities for its army in times of peace, for the first time ever.

Portions of the Arctic region, including the Barents Sea, have long been disputed because of their natural resources and shipping potential, with ice loss opening new shipping routes and enabling further petroleum exploration possibilities.

In 2010, following 40 years of negotiations between Norway and Russia, the countries' then-leaders Dmitry Medvedev and Jens Stoltenberg announced that a breakthrough agreement on the Barents Sea boundary had been reached, opening large, previously legally impassable territories for hydrocarbon exploration.

If only they had a plane that could fly even faster and higher to deliver heavier payloads into higher orbits...
medo 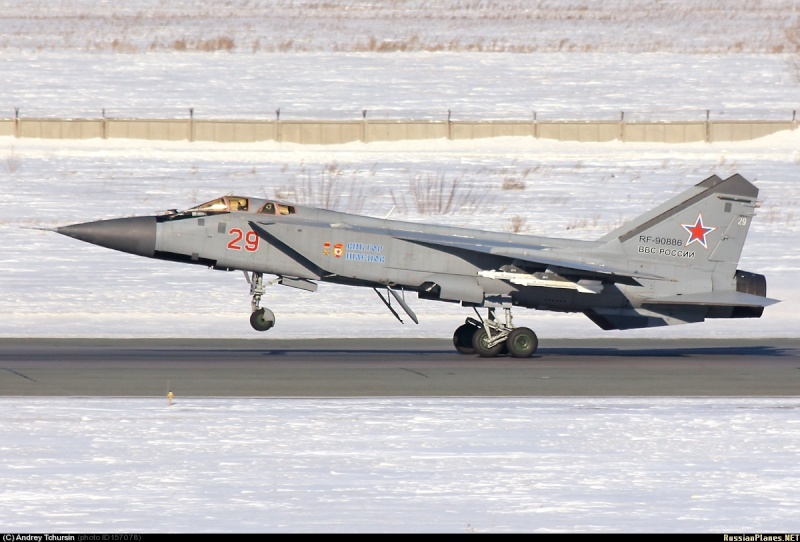 Russia's MiG-31 Interceptors to Stay in Service Until 2026 - Manufacturer

The original variant had a ferry range of 3,300 km. The upgrade must make this 4,000 km. The combat radius is, of course, smaller.
medo

With mid-air refueling. Without refueling its radius is around 1500 km.
GarryB

Its primary armament is belly mounted and it could probably carry up to 6 x R-37Ms on belly points, which means two wing points for four very large fuel tanks plus of course inflight refuelling probably extend the original operational radius of 750km quite extensively.

But keep in mind that the long range missiles could be included in the radius... ie 400km AAMs means the aircraft just has to fly 3,600km... launch its missiles and then fly back to base... it is still an impressive increase however...
Austin


After the modernization of the MiG-31, we expect more than 130 cars in the army. Updating, wonderful, with critical flight-technical characteristics" - Borisov said. According to him, the modernization will take place 12-13 aircraft per year.

The first contract for the modernization of the MiG-31 was signed in 2011, it provides for the supply of the Russian Air Force for over 50 updated aircraft until 2019. In the autumn of 2014 was signed another contract, as more than 50 MiG-31BM. Their military should get to the end of 2018.

Borisov also rasskzal that the program of import substitution in the defense industry is carried out in accordance with the plans.

According to him, during a visit to the company he once again convinced of it.

"Virtually the entire Russian industry has assumed a greater or lesser extent the issues that we have previously linked with Ukraine. It is a very wide range. We have 186 products signed schedule and tens and hundreds of different components," - said Borisov.

Deputy Defense Minister said that the service life of the MiG-31BM is 40-45 years and can be extended up to 50.

"The plane gets a second life. Today it is clear that he can have after upgrading active lifetime and be in the armed forces of the order of 40-45 years, but it is not even the limit, I think, will consider the extension of his life up to 50 years," - Borisov said.

RuAF will need 60 to 72 MiG-31BM to protect Arctic region and operate from Arctic air bases. I hope they will all be equipped with IFR capabilities.
GarryB

All BMs will have IFR.

The first 24 modernized MiG-31BM fighter jets have been delivered to the Russian Armed Forces. Deputy Defense Minister Yuri Borisov said more than ten aircraft will be delivered to troops ever year.

“After completing the modernization of the MiG-31, we expect that military forces will have more than 130 updated, outstanding aircraft with key technical parameters available for use,” said Yuri Borisov. According to him, about 12-13 aircraft undergo modernization per year.

The deputy minister stressed that Nizhny Novgorod Aircraft Building Plant Sokol, where the modernization of aircraft takes place, is adapting to the program of import substitution. Rostec enterprises are making components for many components of the aircraft.

While this aircraft was formerly classified only as a long-range interceptor, the modernized MiG can now destroy both air and ground targets. By modernizing its avionics, the efficiency of the MiG-31BM is 2.6 times greater than the MiG-31.

Zaslon-M differs from the original Zaslon radar by its extended antenna, up to 1.4 m in diameter. The detection range of aerial targets has increased to 320 km, and the firing range to 280 km. The onboard radar system of the MiG-31BM can simultaneously track up to ten air targets.

The MiG-31 is a two-person, supersonic, all-weather, long-range fighter jet-interceptor. It is designed to intercept and destroy cruise missiles, low-flying satellites, stealth aircraft, and other aerial targets of all types at all possible altitudes, during day or night, and in adverse weather conditions. A group of four of these aircraft can control the air space of a front line 800-900 km in length.

The MiG-31 can break the sound barrier while flying level or ascending, whereas the majority of supersonic aircraft break the speed of sound in a shallow dive. Moreover, the MiG-31 can go supersonic at medium and high altitudes without turning on afterburners.
Stealthflanker

Zaslon M ? Well i think only MiG-31M carry it.. and it's not produced.

The MiG-31BM is carrying upgraded "Zaslon-AM" Instead, keeping the old Zaslon 1.1 m diameter antenna but adding new processor and stuff based on Zaslon M.
putinboss

I hear that the mig-31s radar was years ahead of anyone's else, it had better radar than the F-14.
GarryB

MiG-31 has a PESA, an electronically scanned radar. The set on the F-14 had to be mechanically rotated to scan and could only scan much slower.

The Zaslon-M was developed to allow ultra long range AAMs like R-37M to be carried and used, so it rather makes sense to adapt it and adopt it to the upgraded MiG-31BM as it will carry these and other missiles.

I rather doubt this new radar is exactly the same as the old System developed for the MiG-31M as it was developed decades ago even though it did not enter service. I would expect it has be significantly upgraded with new hardware and software by now....
medo

Zaslon-M is radar from the nineties developed for MiG-31M. After almost two decades, they could modernize Zaslon radar for MiG-31BM with more modern technology from Bars and Irbis radars to get similar capabilities.

Mig-31 successfully intercepted a cruise missile -KH-55, or ASX-15 - during an exercise. If I recall, the rcs of this cruise missile is equal of smaller than 0.0001. It is noteworthy to notice that the missile was detected at distance of 90 km. The Mig-31 with its strong PESA radar was designed to intercept the tomahawk waves. Many US experts believe -at the best case- that less than 10% of cruise missiles could reach their target if they are opposed to Mig-31 BM.