Τhere are 140 Mig-31B produced between 1990-1994, not so old they can serve for another 20 years. They must exploit this number of existing aircrafts

I think they will be those, which will be modernized to Mig-31BM standard.
George1

Russia to Base MiG-31 Interceptors in Arctic

The Russian Defense Ministry is to base MiG-31 long-range interceptors at the Rogachyovo Arctic base on the island of Novaya Zemlya by the end of the year to defend against attack from the north, Izvestia reported on Tuesday quoting military sources.

"The MiG-31 squadron will be the main element of Russia's developing anti-missile defense system - the MiG-31 is capable of intercepting not only strike aircraft, but also cruise missiles with nuclear warheads from the Barents Sea to the shores of the Laptev Sea," the source said.

Although Russia does not have complete ground-based radar coverage across its northern areas, he explained, the two-seat MiG-31 can intercept targets up to 124 miles (200 km) away thanks to its advanced radar and long-range missiles.

Earlier this year, the Air Force said it was testing a new advanced air-to-air missile, which aviation analysts told RIA Novosti was likely to be the K-37M (also known as RVV-BD or AA-X-13 to NATO). This could be deployed on the MiG-31BM, significantly enhancing its long-range interception performance against cruise missiles.

An Air Force representative said there will be no problem basing the advanced supersonic MiGs on the frozen island, as the airfield has a good runway and a full range of facilities for those based and living there, including their families.

Russia has based the 63 Fighter Squadron equipped with Sukhoi Su-27 fighters at Rogachyovo since 1993.

Wasn't Mig-31 present in Arctic region before or it's about Mig-31BM which first unit will now serve in that region?
GarryB

Mig-31s have been used in such bases AFAIK, so I suspect this is the first deployment of BMs.

I understand the base they are going to operates Su-27s... I wonder if they will be used or go into storage.

I rather expect that such a base would be largely subordinate to the Aerospace Defence Forces, for air defence (PVO) type operations.

I would suspect that it would be the VKKO that pays for the upgrades to the Mig-31s... and if that is true then I hope they get a nice large budget...

So in 2012 we have 12 MIG-31BM introduced. Does anybody know how many that makes in total?


The upgraded MiG-31 went on duty near Krasnoyarsk

At the airport "Kansk" Krasnoyarsk arrived six modernized interceptor MiG-31. According to RIA Novosti referring to the representative of the Central Military Command (CVO), the aircraft went on duty in the second part of the Air Force and Air Defense.
According to the source, the aircraft went through a deep upgrade to the version of the MiG-31BM. In particular, the fighters got a new weapon control system, which can detect targets at a distance of up to 320 kilometers and hit them at a distance of 280 kilometers. The aircraft can simultaneously track up to ten to six and hit aerial targets.

A total of 2012 aircraft CVO received nine MiG-31BM. Previously reported to the Air Force plans to upgrade to the 2020 version of the BM 60 aircraft MiG-31.

In total, according to the International Institute for Strategic Studies (IISS), in service with the Russian Air Force are 198 fighter-interceptor MiG-31. Flightglobal MiliCAS estimates their number at 146 cars.

The MiG-31 is designed for two-person crew, can reach speeds of up to 3,000 kilometers per hour and has a combat radius of 720 kilometers. Aircraft is in service with six-barrel GSh-6-23, as well as missile air-to-air on six hardpoints.

Maybe I have them the wrong way around, but I think 100 upgraded Mig-31s would be more useful than 100 upgraded Tu-22M3M aircraft... though obviously I would prefer 100 of both.
Viktor

Apparently R-37M is finished and will enter in service in mid 2013.

On the other hand this is Izvyestia


TSAMTO December 20. Russian fighter aircraft several times to increase its striking power. This will happen with the adoption for service MiG-31BM long-range missiles to 37m-class "air-to-air," write "News."
A senior source in the Main Command of the Air Force said "News" that the missiles are fully debugged in the ICD "Vympel" them. Toropova and war await them next summer.

The source said the "Izvestia", the new missiles capable of striking high-speed air targets at a distance of about 200 km.

As they say, "News", the performance characteristics of K-37m were not disclosed, and is now known only basic. In particular, according to the newspaper, "after the target coordinates missile uses an inertial guidance system. Just before to include the active seeker, which leaves little time to dodge missiles. The missile can destroy targets maneuvering overload to 8g, that is highly maneuverable aircraft such as F-16 and F-22 fifth generation. GSN is resistant to electronic warfare. Mass of the rocket - more than 500 lbs. In the final segment of the flight speed reaches its 6M. "

Interlocutor "News" in the Main Command of the Air Force said that the long-range missiles needed MiG-31, as it is intended to be a long-range interceptors. 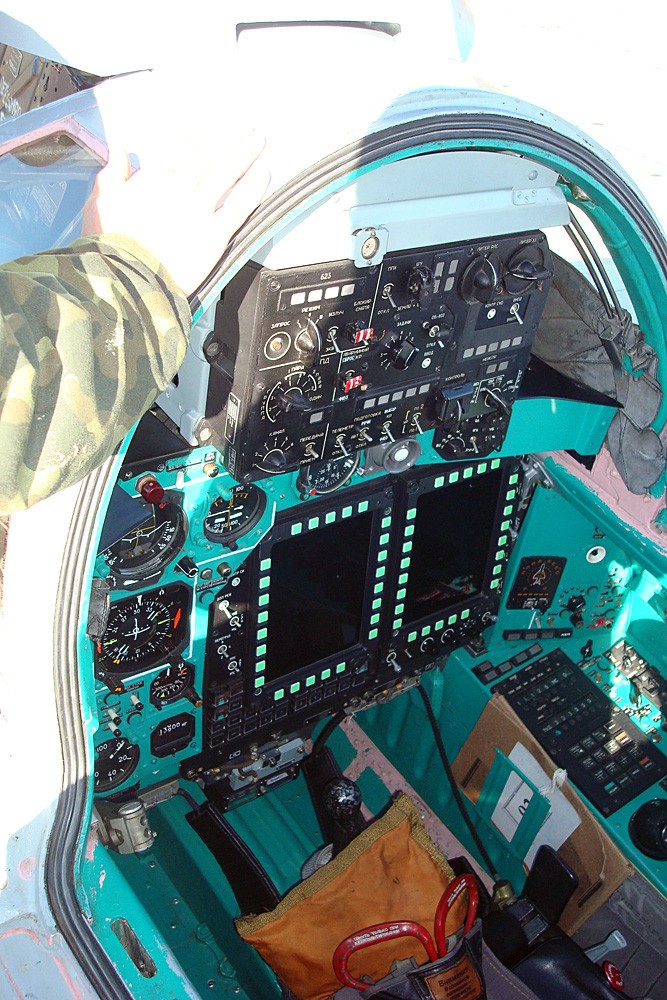 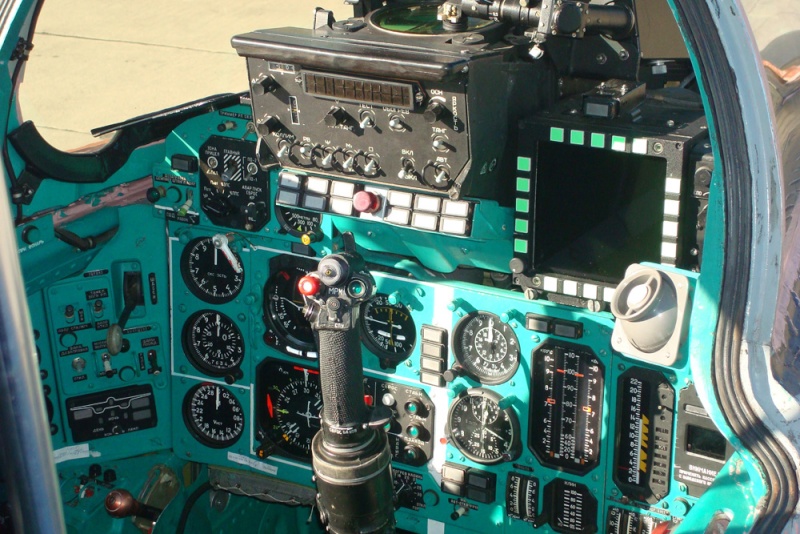 Front seat and back seat of RuAF Mig-31BM. Not so many LCDs as in prototype.
George1

GarryB wrote:I remember reading another article where an official was talking about 100 upgraded Mig-31s by 2020. I thought the 60 upgrades by 2020 was the Tu-22M3M.

Maybe I have them the wrong way around, but I think 100 upgraded Mig-31s would be more useful than 100 upgraded Tu-22M3M aircraft... though obviously I would prefer 100 of both.

Front seat and back seat of RuAF Mig-31BM. Not so many LCDs as in prototype.

The previous prototypes had the entire old cockpit torn out- this is a cheaper and easier solution.

Though, I wonder if its not easier to just gut the whole cockpit and slap in those big SU-35 MDFs.
medo

Interesting is, that they didn't replace RWR with newer one.
GarryB

Well to be fair it is the old display we can see, and can't tell what new antenna and sensors are actually fitted.

Would have liked to have seen more MFDs, but I guess the focus would be the radar and new missiles.
dino00

The famous russian clock is now in the middle of 31BM WSO cockpit.
GarryB

With a new type of multiple weapon ejector rack along the engine intakes perhaps with pod aerodynamic fairings to reduce drag the Backfire could become a multirole aircraft.

The PAK FA and Su-35 both are multirole in that they can be interceptors and fighters and medium range strike aircraft, so it makes a lot of sense to make existing upgraded aircraft multirole too... the Tu-22M3M could be the land and maritime strike and theatre nuclear bomber it was, but you could add Jammer, and heavy long range interceptor to that capacity too.

They did anticipate a Tu-160P dedicated interceptor version of the Blackjack when it was still in production, well now they have lots of Backfires, but the Backfire role can now be performed also by the Su-34 at the lower end of range and payload and the Blackjack and Bear at the upper end of the payload and range scale.

Adding another string to the Backfires bow makes a lot of sense... they could be used for very long range interception roles and having 4 crew means round the clock operation limited only by the amount of fuel the aircraft can carry... and considering the low weight of AAMs it should be able to remain airborne for quite some time. Equally with START I and START II expired now then the Backfire should be allowed its inflight refuelling capability back.

They are talking about two fifth generation engines they are working on... the Type-30 for the PAK FA... perhaps the other engine is for the PAK DA, which means that early models could be tested in Blackjacks and Backfires to improve their performance and reduce their operating costs by the unification of all the engine types. In fact put a set of propeller blades out the front of two and upgrade the Bear with two 5th gen turboprop engines and have total commonality and put a huge fan engine on the front and make a super turbofan for a heavy transport aircraft too.
a89

Is there enough money to keep them? they could rely on retired aircraft for spares, but it's not a cheap aircraft to run. Those variable geometry wings would probably need a lot of maintenance.

Picture of armed Mig-31BM is excellent. Will it also use R-77?
GarryB

The new digital R-27s should be a huge improvement over the older models, but there is still a significant gap in performance between the R-27 and R-77. Of course the R-27 still has flexibility going for it with its passive homing models and two motor choices.

We have seen that long and medium range AAMs are being tested now, which presumably means the R-77M and/or the ramjet powered model.

I would think that a ramjet model would not take them this long to perfect... after all the Kh-31 has been in service for a while as have many combined rocket ramjet powered missiles in Soviet and Russian service. Perhaps they have taken a further step and gone for scramjet propulsion and extended range and speed.

For BVR missiles a great weakness of the very long range missiles is long flight time giving the target too much time to move out of the kill zone. A Mach 8 scramjet powered missile would minimise that escape window.
medo

“We have started development of a new aircraft of this type and I think we can develop this plane before the state armament program ends in 2020,” Bondarev said at a meeting with Russian lawmakers.

“The new plane should replace the existing fleet by 2028,” he said.

Bondarev spoke out against restarting production of the MiG-31, which was stopped 20 years ago, saying the country needs a totally new interceptor to meet modern requirements.

The Russian Air Force has 122 MiG-31 interceptors in service and more aircraft in reserve, he said.

The two-seat MiG-31 can intercept targets up to 124 miles (200 km) away thanks to its advanced radar and long-range missiles. The Air Force said in 2012 it was testing a new long-range missile for the MiG-31, which analysts who spoke to RIA Novosti said was likely to be the K-37M, also known as RVV-BD (NATO AA-X-13 Arrow).

The Russian Air Force has previously said it intends to take delivery of up to 60 MiG-31BMs by 2020, under a contract signed with United Aircraft Corporation in 2011.

MiG-31 interceptors are an integral part of a comprehensive aerospace defense network being created in Russia to thwart any potential airborne threats, including ballistic and cruise missiles.
Zivo

That's a surprising development. So, will it be large and fast like the MiG 31?

Internal carriage of BVR weapons, large AESA, and VLO frame could make this a real killer. I hope that's what we see on the finished product.
Sponsored content