Newer equipment such as:
- T-72B3M or outright wait for Armata as they are more capable against western armor.
- Newer aircraft. Lean and mean is correct for Belarus, but newer crafts are needed. Su-30SM may enter Belarus airforce to replace MiG-29 series. Although waiting for PAK FA may be ideal.
- Ratnik like program. Since number of ground troops is small, make it mandatory for all troops.
- More modern electronic warfare and early warning system. To have the edge in technology against the enemy.

sepheronx wrote:Newer equipment such as:
- T-72B3M or outright wait for Armata as they are more capable against western armor.
- Newer aircraft. Lean and mean is correct for Belarus, but newer crafts are needed. Su-30SM may enter Belarus airforce to replace MiG-29 series. Although waiting for PAK FA may be ideal.
- Ratnik like program. Since number of ground troops is small, make it mandatory for all troops.
- More modern electronic warfare and early warning system. To have the edge in technology against the enemy.

i think upgrading their stocks of:

and like you mentioned some good EW equipment/vehicles/aircraft and your sorted. I know this sounds like a lot but most of it is upgrades, most expensive thing on here is the Su-30SM, Mig-35(if you choose it) and Mi-35M (if you choose it)
zg18 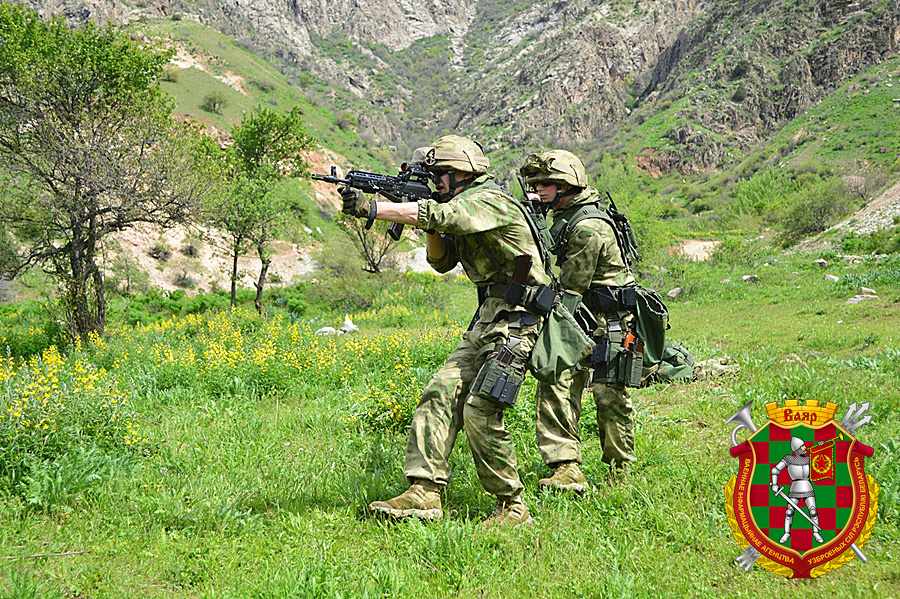 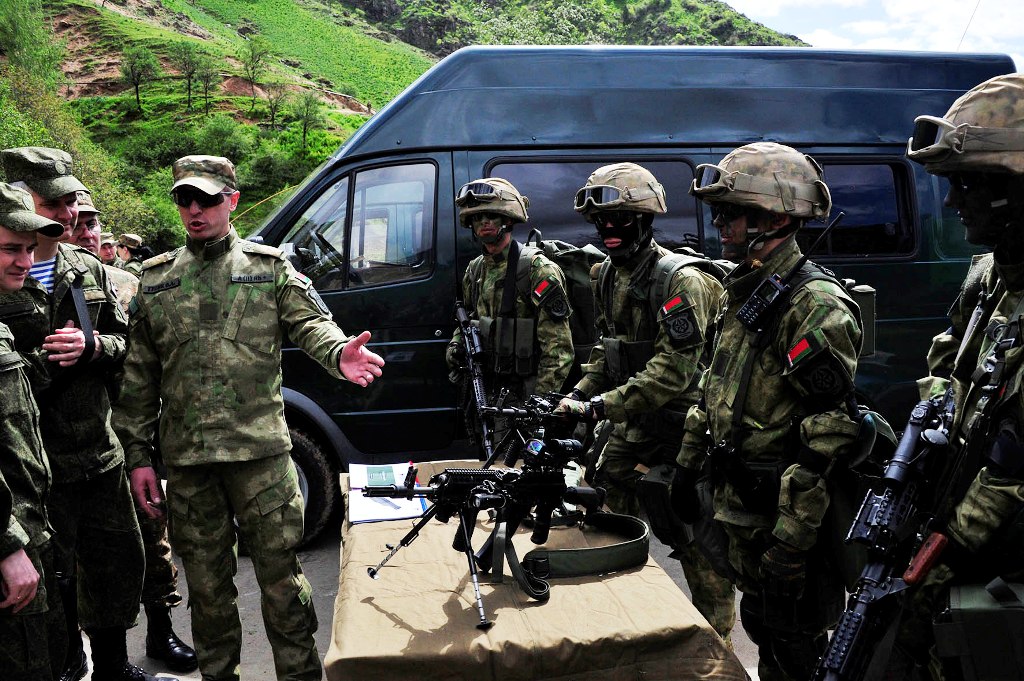 Tank crews got some action

So we know that the Belarusian air force and air defence isn't that great but what of its ground forces???

Is this some sort of flamebait ?

If not then name me 5 countries with better AF and ADF in Europe of the size of Belarus.

so your saying 37x Mig-29   (of which 13 are BM version) and god knows what state the rest are in and Su-25(not SM level) would be suffice against NATO? what you forget even the Belarusians realise their airforce isn't what it should be, and you also forget that most european countries are in NATO so if there ever was conflict it would be against one country or even two, it would be against NATO. Indeed they have better AF and ADF than the likes of Estonia, Lithuania, and Latvia, but that isn't exactly hard. The Mig-29 they have should be upgraded to SMT/M2 level if the airframes are ok, and Su-25 upgraded also,  they could have even brought back into service 12 Su-24 and 12 Su-27 and have them upgraded then you would have a good capable airforce. Its airdefence does need upgrading, Pantsir, and upgraded Tor, Buk, and S-300 and your sorted. Also you forgot to answer the question whats your views on its ground forces????

as for your question without going too much into researchng it, i would say Netherlands, Denmark, Greece, Finland, Poland, and i think even some smaller countries like Portugal, Austria, Switzerland, could still prove to be a handful, also depends on what you mean by size. Also having a certain amount of aircraft doesn't mean it would be a great airforce it ultimately boils down to maintenance, training/flying hours, and just how good the pilots are. Another thing to consider is Belarus's defence budget, around $2bn, isn't a huge amount for the size of its force, then maintenance could be questioned. I however think Belarus pilots possibly dont get as much training as they should, as for ground forces they seem to be fairly good.

Yeap, Belarus is something akin to the Baltic in that regard, minus the need for asking Russia to guard their airspace with QRA Fulcrums. About 13 of their own Fulcrums should be serviceable. Basically they have no real Air Force for war purposes and their strike capability is non-existent. As frontier country vs NATO having CAS assets like a dozen old Su-25 is not exactly a priority. These will be shot off the sky in a matter of a day or two if SHTF (e.g. Georgia 2008).

Belarus is the Foulda Gap reversed, but with nowhere near the capable/strong forces to defend it. Those S-300PS are good start but still there needs to be improvement in the air (fast jets) and ground (armor). The current order of battle and deployment on the ground is abysmally short-sighted and insufficient in quantity.

"A possibility will now appear to detect and track ballistic targets, as well as to increase the range of aerial target detection, increase the mobility of the automated grouping and cut expenses on the radar’s operation through the use of modern technologies," the Belarusian Defense Ministry said.

As Chief of the Belarusian General Staff, First Deputy Defense Minister Major-General Oleg Belokonev said, the radar delivery is an historic moment for radio-technical troops and the troops’ switchover to "a new qualitative level for ensuring national security, helping to increase combat capabilities considerably and raise their mobility."

Air Force and Air Defense Commander Major-General Oleg Dvigalyov said that another radar station would enter service early next year and Belarus would receive a total of seven such radars by 2020.

does anyone actually know whats actually happening with the so-called modernisation plans for the air force??

there was talk a while back about upgrading their retired Su-27's then their was talk about getting ex-Indian Su-30K and upgrading to KN, and in December 2015 10 Mig-29's were refurbished but no mention of upgrade. With such a small armed forces budget its hard for them to purchase anything great in decent numbers. I have a feeling Belarus is hoping that buying Yak-130 and possibly giving them a homegrown upgrade to combat duties that this will suffice, as it double up as a trainer as well. Which isn't a bad idea however i still think more capable aircraft need to be bought. Dont get me wrong the Yak-130 could be a decent little combat aircraft and would be ideal for taking out helicopters, drones, basic fixed wing as well as ground attack missions, but for taking on more high tech fixed wing fighters they would struggle. A logical solution would be to upgrade existing Mi-24 to Mi-24PN/Mi-35M or depending on condition buy some, their Mig-29's yet again depending on condition they could upgrade some more to their homegrown upgrade to BM level which is similar to M2/SMT which to be honest is good enough for their needs. The Su-25 should also be upgraded. And once this has been done they could look to purchase if budget allows either 12x Su-30Sm, or more likely options buy the ex Indian Su-30K and upgrade as mentioned or upgrade their retired Su-27 to Sm level. Mig-35 could also be a good option but costs to buy new aircraft will no doubt be out of reach of their budget.

To help save on costs etc they could reduce the number of aircraft in their inventory their numbers are currently approx. as follows(not inc Yak-130):

So to re-cap what they ideally want is as follows:

this would give them a good mix of interceptor and ground attack, and back this up with their air defence (which is actually quite good) then they could have a capable air force. And the Yak-130's could in times of conflict if needed be used for combat missions (especially drone hunting).


anyone else got any news of whats happening?

anyone else got any views on what they should go for? 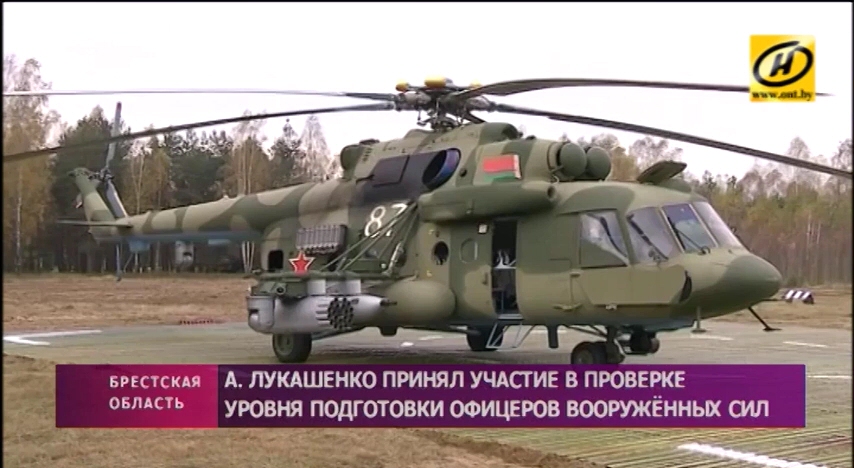 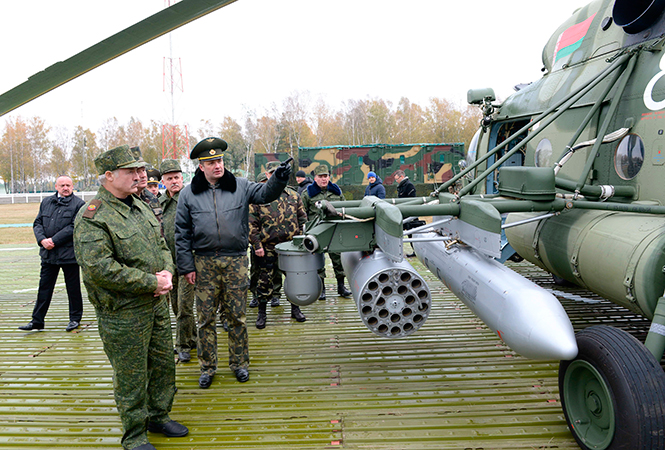 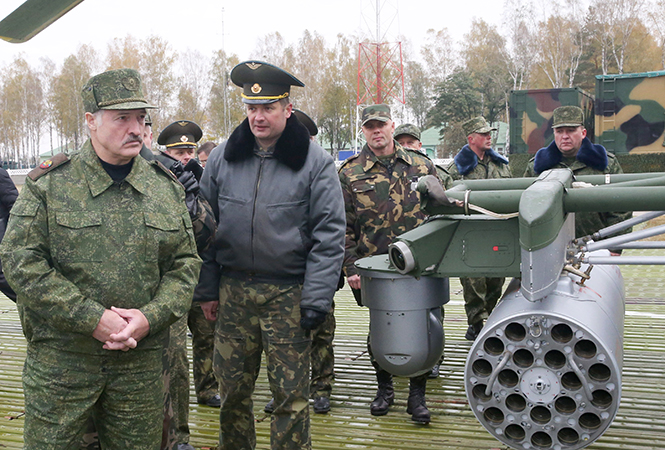 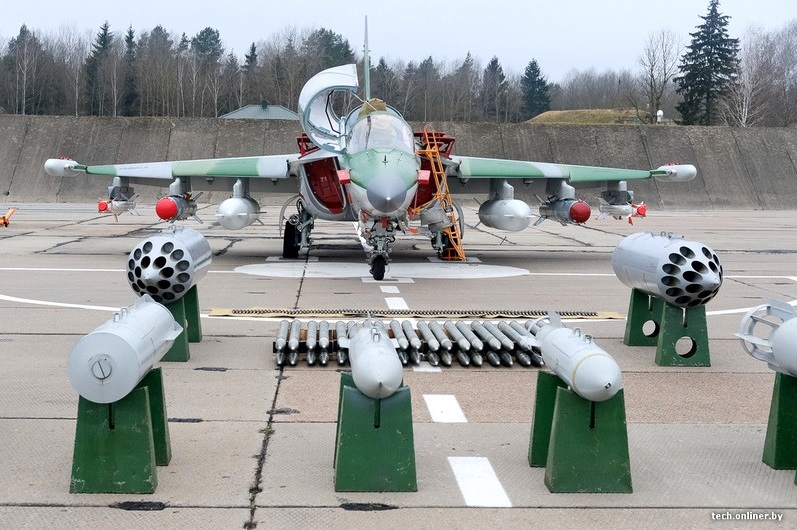 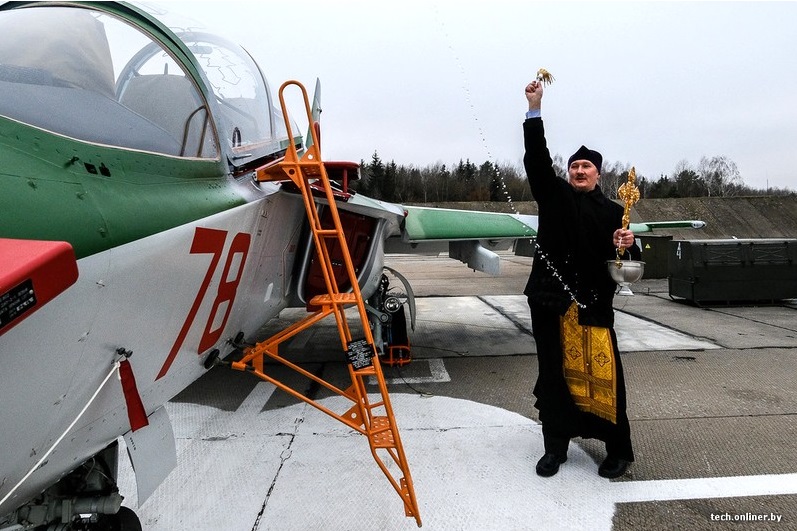 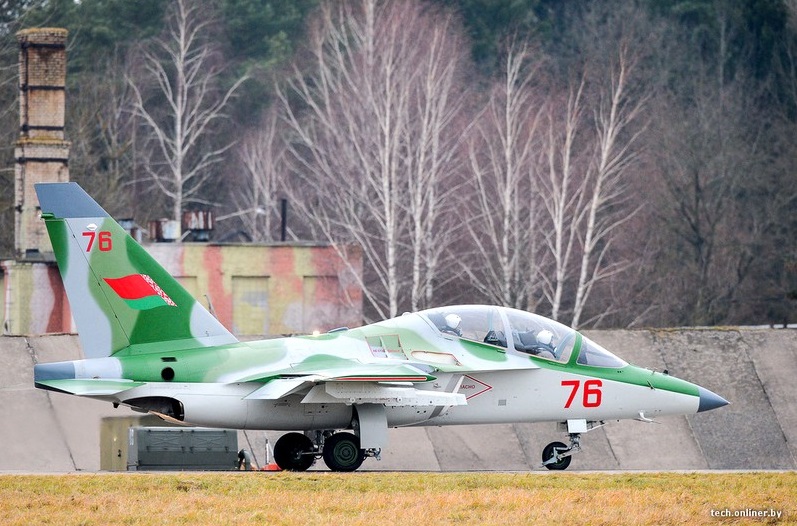 and it look like there going to be armed as well

According to the State Military-Industrial Committee of the Republic of Belarus, JSC "140 Repair Plant" (Borisov) has successfully completed the development work on the BTR-70 armored personnel carriers to upgrade to level-70MB1.

The project was carried out at the expense of own funds. Customer of the R & D by the Ministry of Defence of the Republic of Belarus. 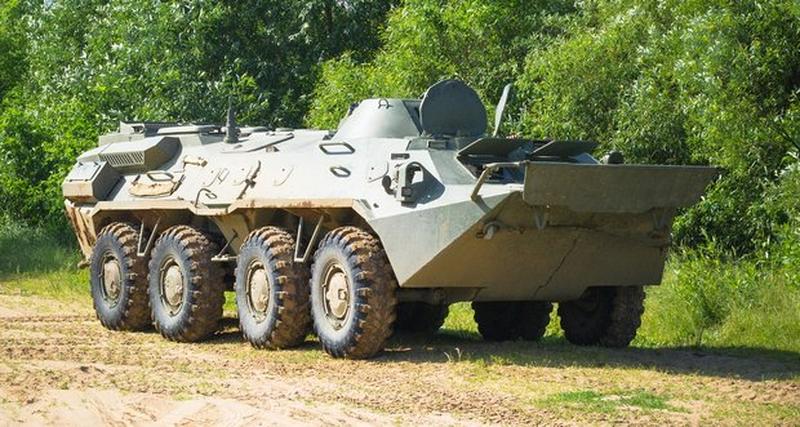 Despite all the projects of modernization of T-72 tanks developed by Belarusian enterprises, the Ministry of Defense of Belarus eventually preferred the already worked-out and standardized Russian version, the more it uses the multi-cannon sight of the gunner of the Belarusian production. 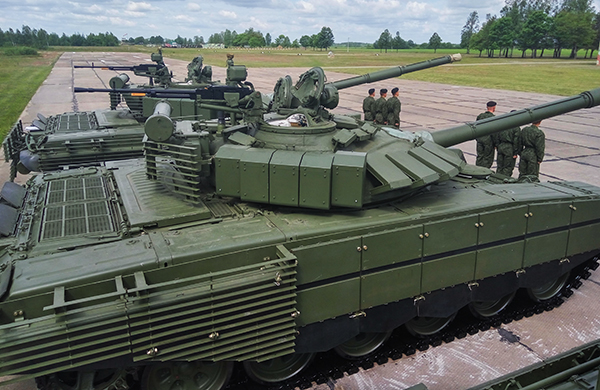 As reported on June 2, 2017 television channel "VoentTV" of the Ministry of Defense of Belarus, "modernized tanks T-72B3 entered the armament of the Belarusian army. Today in a solemn atmosphere, combat vehicles were handed over to the personnel of 969 tank reserve bases. The event was attended by the Defense Minister of the Republic of Belarus, Lieutenant-General Andrei Ravkov, representatives of the Ministry of Defense and the Armed Forces, as well as the Russian delegation from the joint stock company "Scientific and Production Corporation" Uralvagonzavod. " 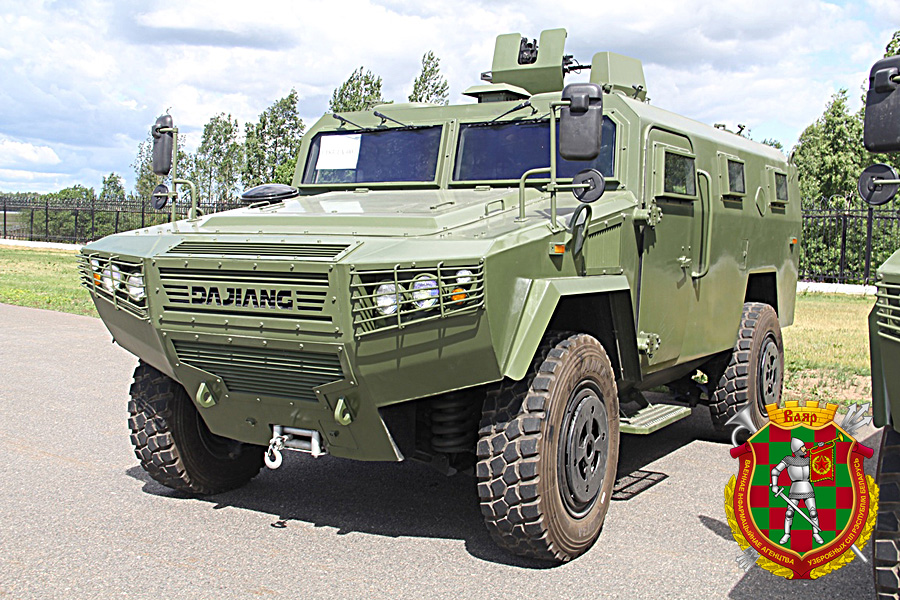 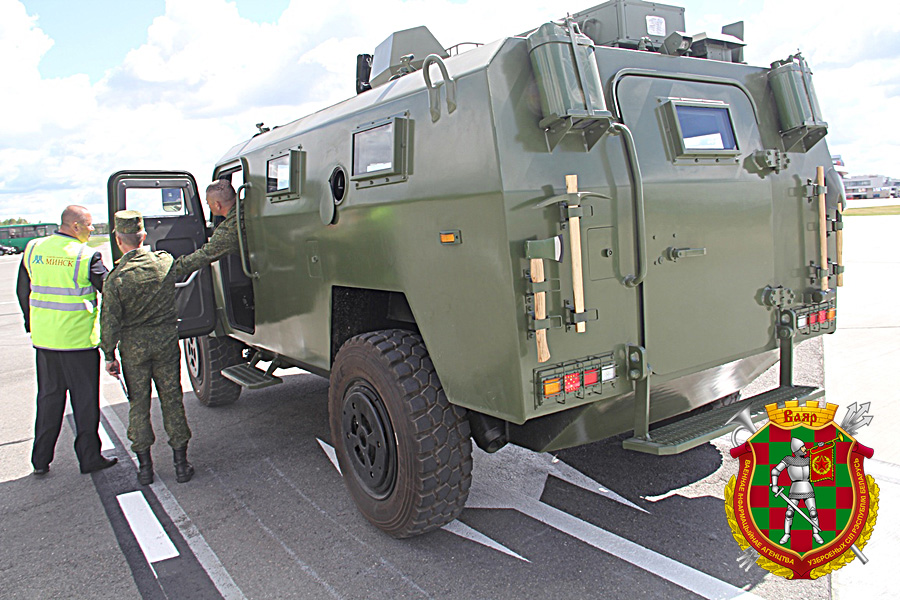 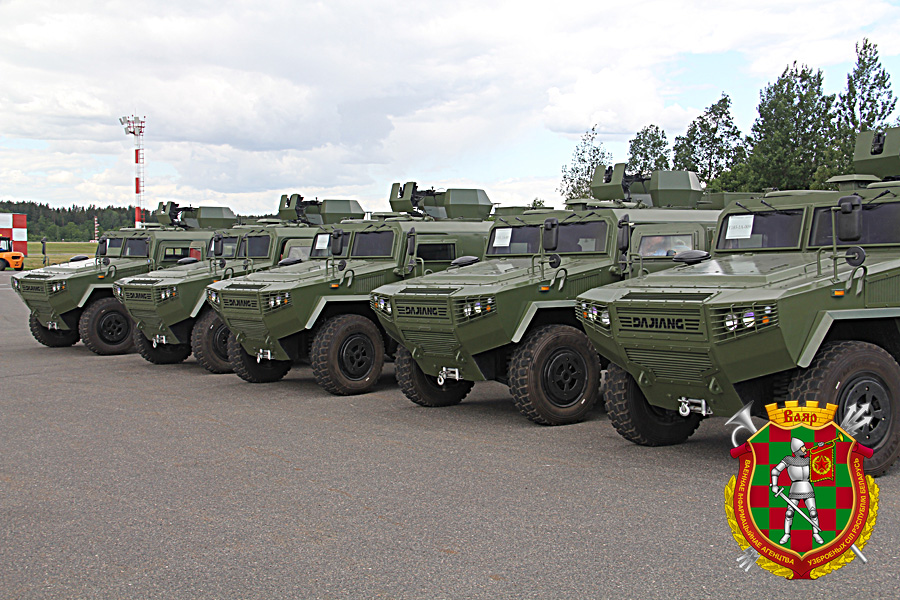 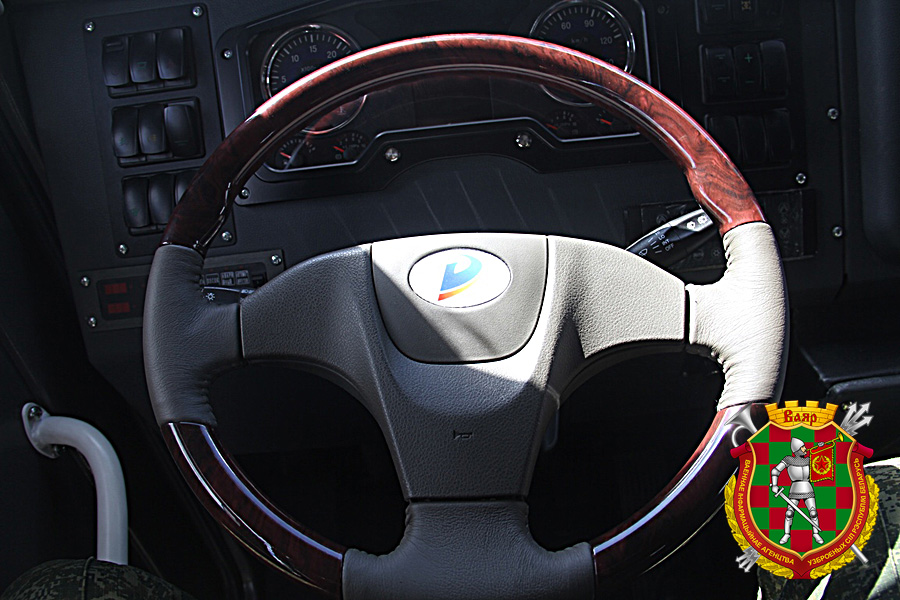 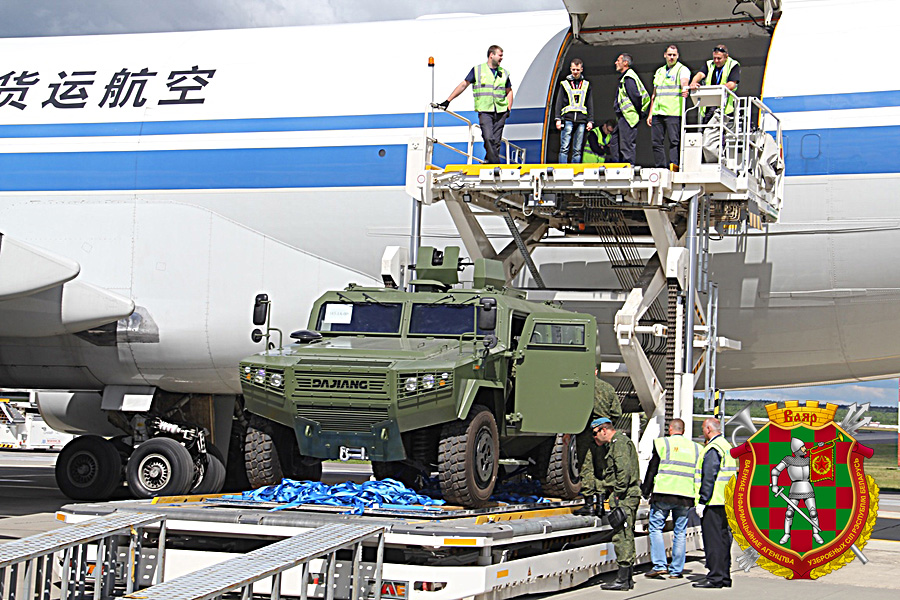 Military parade in Minsk on July 3

The military parade of the troops of the Minsk garrison and the passage of civil engineering equipment in honor of Independence Day took place in Minsk, the BelTA correspondent reports.

In total, about 3,500 servicemen were involved in the parade. 20 parade calculations, which were presented by the Minsk Suvorov Military School, the Military Academy, the military-technical faculty of the BNTU, etc., took part in the pedestrian column. 26 ceremonial calculations of modern combat equipment participated in the composition of the mechanized column. A total of 222 units of equipment were involved. T-72B tanks, BMP-2 infantry fighting vehicles, BTR-80 armored personnel carriers, Bogatyr cars, lightly armored vehicles Cayman, MZKT vehicles with unmanned aerial complexes, P-434 stations, 2S12B mortar complexes "Sani" , Combat vehicles "Sturm", the multiple rocket fire system "Polonaise" and other military equipment. As part of the air force, 58 aircraft participated in the parade: 26 helicopters and 32 aircraft. A column of civilian equipment was represented by 102 units, including BelJ cars, machinery of the Minsk Tractor Plant, Gomselmash Holdings, Amkodor . 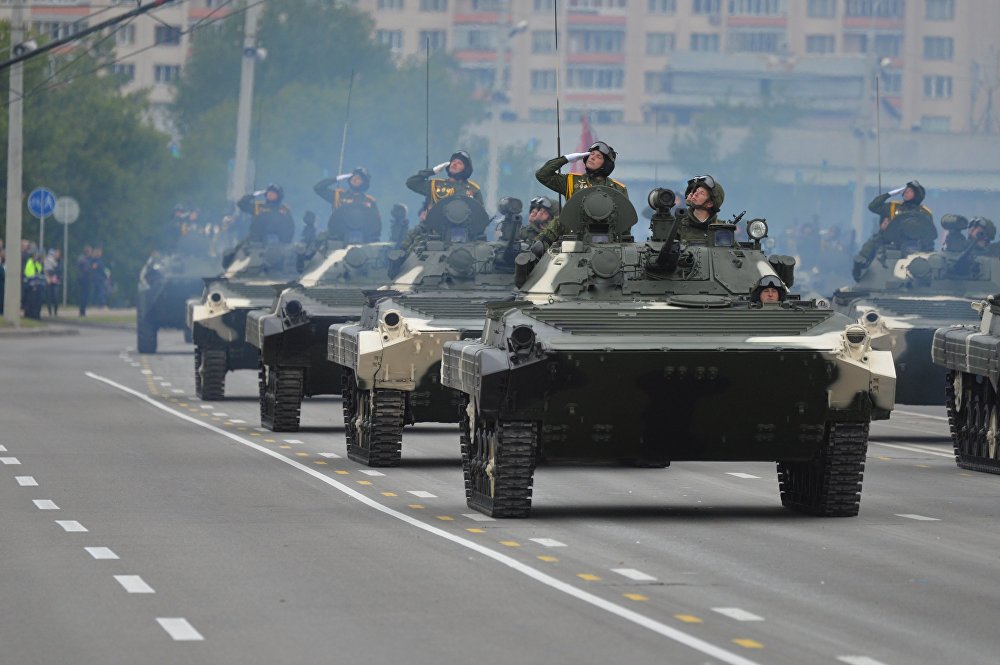 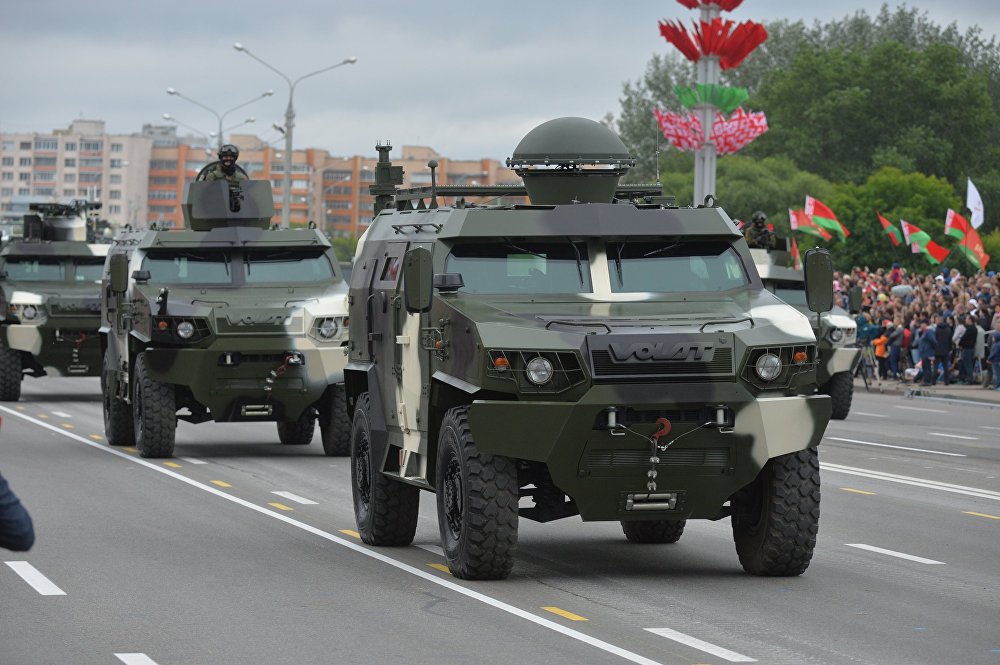 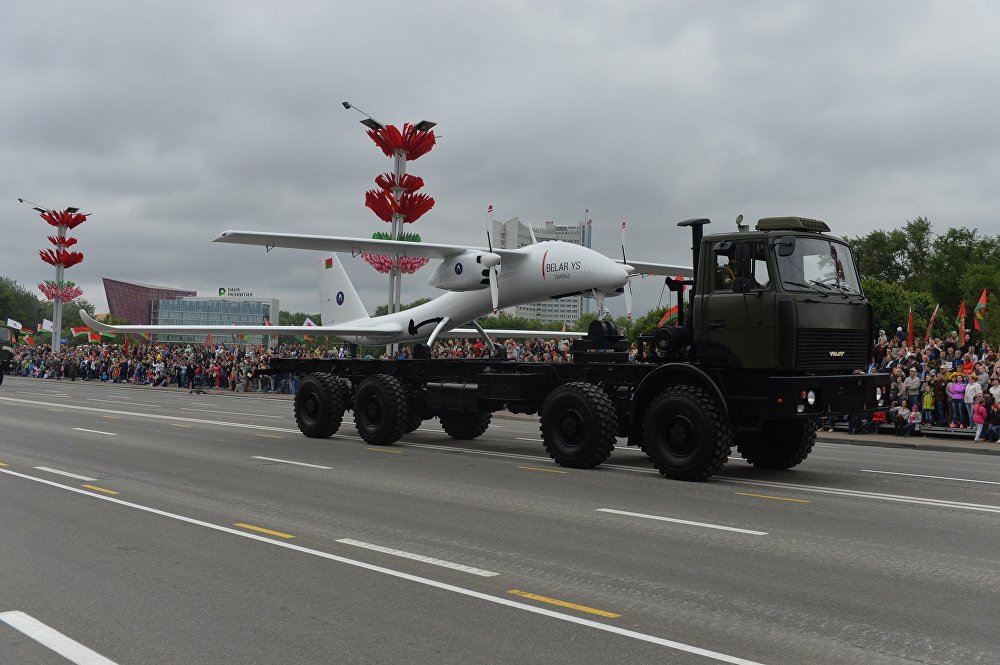 Ukrainian assessment of the state and prospects of the Belarusian army

That's a lot of artillery and vehicles. Just like Russia and Ukraine harbouring vast amount of equipment. If Belarus pushed sales of these and cleared them they would actually have some money to buy and upgrade it's forces.

In Belorussia, a regiment was set up on anti-aircraft missile systems "Tor-M2K"

As reported by the Ministry of Defense of Belarus, December 1, 2017 at the airport in Baranovichi solemn ceremony was held to revive the 1146th Guards air defense missile regiment of the Air Force and air defense forces of Belarus. The regiment is equipped with anti-aircraft short-range missile systems 9K332MK Tor-M2K. 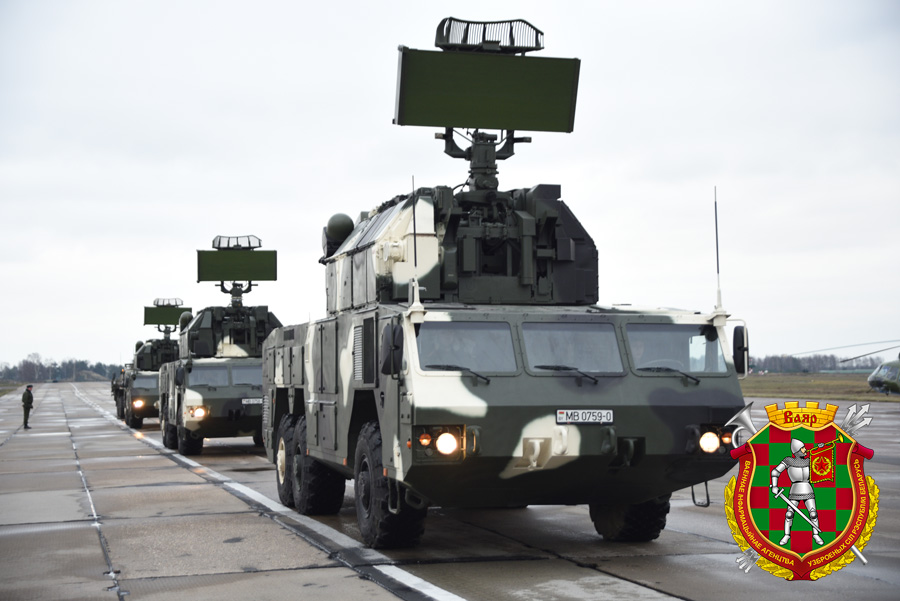 The bmpd comment. From 2011 to 2016, the Air Force and the Belorussian Air Defense Forces received four batteries of the 9K332MK Tor-M2K from Russia (each consisting of four 9A331K combat vehicles on the wheeled chassis of MZKT-6922). In October 2017, the Belarusian side signed an agreement on the purchase of the fifth battery of the Tor-M2K air defense system.

The 1146th Guards Air Defense Missile Regiment was originally formed on the territory of Belarus in 1956 as the 1146th Guards Air Defense Artillery Regiment of the Air Defense Forces (part of its history from a separate anti-aircraft artillery battalion, formed in August 1941 in Leningrad, then the 36th Guards antiaircraft artillery battalion). In 1961, the regiment was reorganized into an anti-aircraft missile system with the equipment of the S-75 series air defense system. In the late Soviet years, the 1146th regiment with the S-75 and S-125 air defense systems was part of the 11th Air Defense Corps (control in Baranovichi) of the 2nd separate air defense army, and was traditionally one of the "model-demonstration" units of the Air Defense Forces in Belarus. Since 1992, the regiment under the Belarusian jurisdiction, disbanded in 2001.

Belarus silently builds a new army. Mostly based on a smaller army which consists of light mobile forces and an a key emphasis on special forces and reduced number of heavy weapons. If this is the case they need to start selling older equipment and heavy weapons fast to provide money for this.

Very interesting read of current situation and future plans. Some key points military spending up by a fifth. 25% of older vehicles to be sold off. Plans to keep large air defence force and reduction of troops mainly in the form of conscripts with more reliance on reservists and contracted force