Did Banderastan invent the ultimate trampoline?

It may take them a while, they are reinventing the wheel at the moment.

Big_Gazza wrote:Ukraine promised to launch tourists into space by 2030

/pass out from laughing too f*cking hard

I can kind of believe it

ALAMO wrote:It may take them a while, they are reinventing the wheel at  the moment.

..and getting it wrong 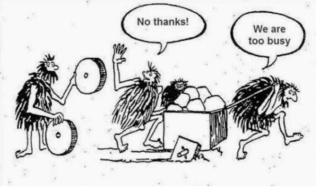 Why would Russia sell Turkey the S-400 when in the article, they mention Russia as an enemy.

If Russia could only sell weapons to best buddy countries then they should get out of the arms selling business.

But worst case scenario how many missiles did they sell them... Russia knows.

One or two S-400 SAM batteries would not stop the entire Russian AF or even a small fraction of the various old obsolete SAMs they could easily convert into ballistic rockets to attack them with.

They are not going to agree on a lot of things but that does not matter, they can certainly compromise on their actions to keep the peace.
ALAMO

... but it is in the US interest to make them fighting each other

And seems that Turks finally get the point.
Who would not, surviving a killing attempt organized by your "ally" because warned by your "enemy"

Some Ukr propaganda rag claims that video of the IL-114 shown being assembled in the factory shows serious issues with the
manufacturing quality that can lead to catastrophic failure of the fuselage in flight.

When was the last time you heard of a Russian airframe failing in flight? Never. Stills from the video show no issue and all we
have is selective interpretation. Some shitty, butthurt losers in Banderastan are merely wallowing in projecting their own fail onto
Russia. This is the sort of crap that is ladled into the brains of Ukrs 24/7/365. And many of them eat it up with relish.

The Czech regime is now singing a different tune about relations with Russia once it has realized that
Russophobia comes at a price. These clowns are chirping about better relations.

An open apology for their lies would be a good starting point.

I like the sound of Russia having a list of hostile countries it will not be doing much business with, has anyone heard or read any more about this?

There is not much to be heard of, as the whole story seems to be figured out by the sources like Levanda and Izvestia, published further by Atlantic Council, and repeated by all the barking dogs along the stream.
They are mixing the pooled data whom the Russians consider as enemies, and apply that to some gov level solutions or lists.
Sounds bullshit enough?

kvs wrote:The Czech regime is now singing a different tune about relations with Russia once it has realized that
Russophobia comes at a price.   These clowns are chirping about better relations.

Russia should tell them to go forth and mono-copulate...

Really worth watching. The US invented Eugenics which created the ideological framework for the Nazis and is
still floating on the legal framework.

Is Russia behind this?

Hilarious... HATO warships are openly sailing into waters they are not supposed to and all of a sudden it is Russia that is to blame.

These tracking systems will be run and controlled by the west no doubt and of course any military force that relys on such a tracking system to monitor naval traffic is a useless piece of crap military force... that would be like monitoring their enemies... by watching the BBC and CNN...

A military force should be more proactive in monitoring international shipping traffic... those systems use transmitters on the ships to give their location so there is no need to hack anything... I rather suspect those HATO ships are transmitting false locations as a provocation to the Russians rather than the other way around.

Russia would not benefit from it appearing that enemy ships are sailing through their waters without being challenged, it would make them look weak and not on the ball.

All during the cold war there were constant claims that the Soviets were sending subs into Swedish waters to test their defences and to map the area accurately for later use, but in the 1990s it turned out the very few times it actually was a submarine and not marine mammals having sex it tended to be a HATO ally that was to blame. The one time it was the Soviets it got called Whisky on the rocks as is was a Whisky class SSK stuck.

Bad old Russia is weaponising something that is innocent and pure.... yeah right... which probably means the west has been using it for naughty things and are on the cusp of getting caught.

The Russians have told the British and then that other ship that sailed into Crimean waters they were violating their waters.... I don't remember them mentioning AIS information at all... the Russians are less likely to whine and complain about such territorial violations as to send out patrol boats and fire warning shots... and next time not so warning shots.

The article even admits that the US Navy don't use AIS most of the time and have had a few collisions because of that, so now they use it in highly congested sea lanes... but the article therefore suggests that when the US Navy is sailing in or near Russian waters they would have it turned on?

Or that they would keep it on if the system was hacked and was showing them in places they should not be...

What a load of dingoes kidneys...

And now there are problems with the AIS system and now they are blaming Russian hackers... and of course with no evidence at all...

This is either western intel propaganda or someone wanting Atlantic Council attention and funding...

The interesting thing is that the evil Russians are doing this but there is no huge spike in ship collisions and accidents except for US ships with the system turned off anyway... so even if this is something Russia is doing... just like hacking the US election... there seems to be no effect on any outcomes and it just looks bad.

Which is amusing because the Russians don't have a lot of money and time to waste on such pointless endeavours... in fact I would say it is more something Bellingcat or White Helmets or Reuters or some other western intell fabrication factory would be doing... create mischief but no actual damage and then just blame Russian hackers Russian Hackers RUSSIAN HACKERS...

This is clearly a non story.

Russian "hackers" is a catch all BS "argument" that requires no plausible story line from the propagandists.
Naturally no evidence of actual Russians and actual hacking is ever provided. By actual hacking I mean
relevant systems. In the case of the Colonial Pipeline it was some accounting systems that got ransomware
hacks. It was the choice of the operators to shut the pipeline down. The claim from day one was that
Russians shut it down. In the real world it was a ploy by the pipeline operators themselves. There is something
called motive but it has been excised from the public discussion since the routine claims about how Putin
offs his has been and indirect asset critics.

The story about stuxnet has given the sheeple the idea that all systems can be hacked. This is nonsense
and clearly it was civilian products imported by Iran and other countries that got hacked by the Israelis likely
using built in back doors. Neither the USA nor its minions are going to be installing stuxnet type viruses on
critical Russian systems. Nobody should expect that Russia would be trying similar idiocy. EW is not about
hacking but about EM spectrum attacks that disrupt equipment functionality. This includes hijacking drone
control.

So Czechia is one of the top customers for Russian military equipment. But this looks like a resale racket where the weapons are going
to countries under UN embargo or most likely Ukraine. After all, Czechia, Bulgaria, Poland, Romania and other former Warsaw Pact
clown states unloaded their rotting stocks of Soviet military equipment into Ukraine in 2014.

I wonder why Russia sold military equipment to Czechia. I do not think it was simple profit and revenue desire.

A lot of these weapons were also going to al-kaida and friends in Syria.
Scorpius

when you reject the Soviet heritage, but only until you want to raise sales: 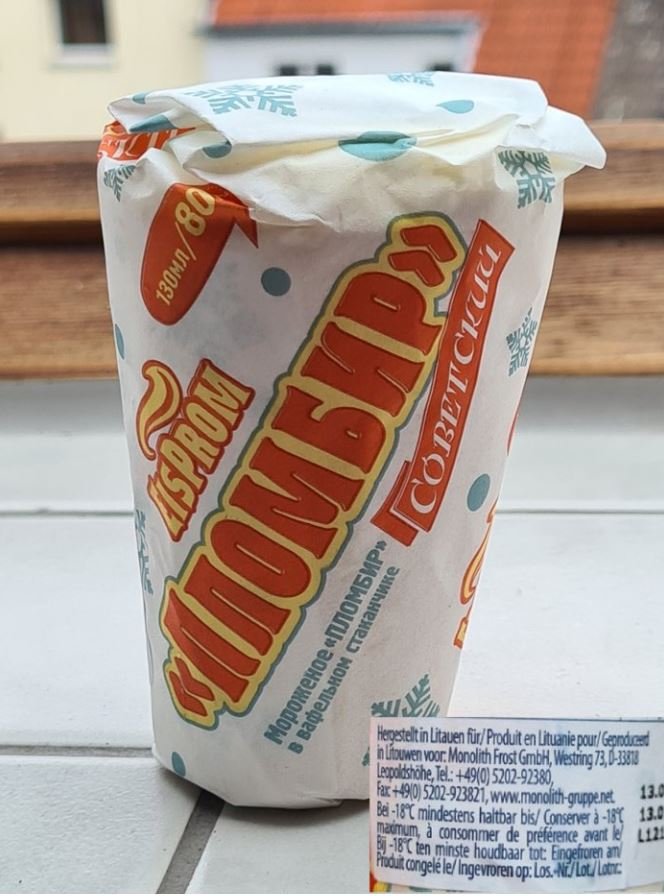 the photo was sent from Germany.

It is a Soviet ice cream in a waffle cup nostalgia product apparently produced in Lithuania.
The country rabidly rejects the Soviet era so it is strange to see this product with Cyrillic
writing straight out of the bad old days.

Lavrov perfectly describes what the Washington-led west is doing at the present time. While trying to brow beat Russia and
China, they are at the same time fully undermining the UN and trying to impose their exclusive country club "rules based"
system where non-members have no standing (i.e. can be bombed into oblivion in the name "goodness"). This new order
construction effort by NATzO involves laundering emerging Nazis and engaging in brazen revisionism of WWII history to facilitate
this laundering.

I have said it many times, NATzO is trying to rewrite history to make Russia responsible for WWII. This will include the Holocaust
and every other war crime. The Nazis will be excised from this brave new NATzO fantasy fiction history. This all by itself exposes
the Nazi core of NATzO. NATzO cannot be called anything else but NATzO. Maggots hiding under the fig leaf of democracy which
does not actually exist when it counts.

To be honest I am really surprised at countries like Germany and Israel who say nothing when the nazis in Ukraine pull their crap, or the US votes against new laws banning the glorification of Nazism....

Well after watching that video on Nazism I have a better understanding why for the US, but for Germany and Israel????
kvs

GarryB wrote:To be honest I am really surprised at countries like Germany and Israel who say nothing when the nazis in Ukraine pull their crap, or the US votes against new laws banning the glorification of Nazism....

Well after watching that video on Nazism I have a better understanding why for the US, but for Germany and Israel????

The German elites are part of the country club and after WWII a lot of Nazis were laundered back into the mainstream. I know that
Germans have been subjected to an ongoing guilt trip. But they are not in the driver's seat of their country. The migrant flood
shows this.

Israel is peculiar. It needs to play nice with the west since it depends on it and has a good thing going. I am particularly annoyed
by the situation in Ukraine, where Jews are playing footsie with Banderites. I can only think of this as a survival strategy but I think
there is resentment against Russia as well. For sure this is particularly intense in the US.