Austin wrote:Sounds good , So does it have just Radar or even EO sensors.

So know 3 UAV/UCAV under development

From my mp.net megapost series.. http://www.militaryphotos.net/forums/showthread.php?233668-In-Moldova-they-now-officially-speak-Romanian&p=6968235&viewfull=1#post6968235
NOTE: you will have to go to the link to my post on mp.net if you want to see the pics or other links I posted, because they don't seem to copy right.


Here's a list of the main perspective UAVs in development, no pics nor much information for most of them, but google them up maybe you'll find something

Here's a model of what might be Altyus-Ml https://servimg.com/image_preview...=25&u=17812518
A model of what's believed to be Sokol's supersonic UAV project http://img3067.imagevenue.com/img.ph..._122_559lo.jpg
There's also an unnamed project on the creation of a UCAV on the basis of the PAK-FA; so something like the beggining of a 6th generation aircraft I'd imagine although still a long way from it.

Now as for current UAVs;

Also a couple UAV projects with the UAE.. http://www.militaryphotos.net/forums/showthread.php?233668-In-Moldova-they-now-officially-speak-Romanian&p=6972848&viewfull=1#post6972848


There are two UAV-related projects with the UAE AFAIK. The first is the joint Russo-UAE venture on the creation of a helicopter UCAV on the basis of the Berkut VL ultra-light helicopter (http://www.aviationunion.org/news_second.php?new=101).

The secound is the Russian purchase of an unnamed UAV from the UAE.

From what I can gather, the two projects are unrelated (http://www.navaldrones.com/Berkut-VL-UCAV.html), but they do seem to involve the same UAE company - Adcom. I gather it's their only UAV company.

Now, why would they buy UAVs from a UAE company like Adcom, and also agree to a joint-venture where the same company will use a Russian helicopter as the basis for a new attack drone? The company must be pretty advanced, right?
Right. You see, the UAE doesn't exactly have much of a home-grown military-industrial complex, much less a high-tech scientific base and engineer graduates every year.
But what they do have is money, and lots of it; which they're busy investing. A lot of foreign specialists too, and expats - the country is basically built on them. They also have access to Western technology, and Western expertise/specialists - and here we come to the crux of the matter.
Russia initially tried to aquire advanced Western UAV technology via Israel - but only got the stuff that's a generation behind. Now I suspect it's trying to slip around Western unwillingness on tech-transfer - by co-operating with a UAE company which perhaps does have access to such resources.

Nice to see this new big twin engine UAV Altius. I hope it will be able to carry armament on hardpoints like Vikhr ATGMs or smaller laser guided bombs and rockets. With two engines it is strong enough.
flamming_python

medo wrote:Nice to see this new big twin engine UAV Altius. I hope it will be able to carry armament on hardpoints like Vikhr ATGMs or smaller laser guided bombs and rockets. With two engines it is strong enough.

With a selection between:
Vikhrs as the general-purpose missile for most tasks
Hermes-As for targets at longer ranges
And perhaps S-25L/S-25LDs laser-guided rockets for cheap and cheerful fun at short-ranges where a good amount of explosive is needed.

The AFAR compartment is labelled.

What does "БО" stand for? 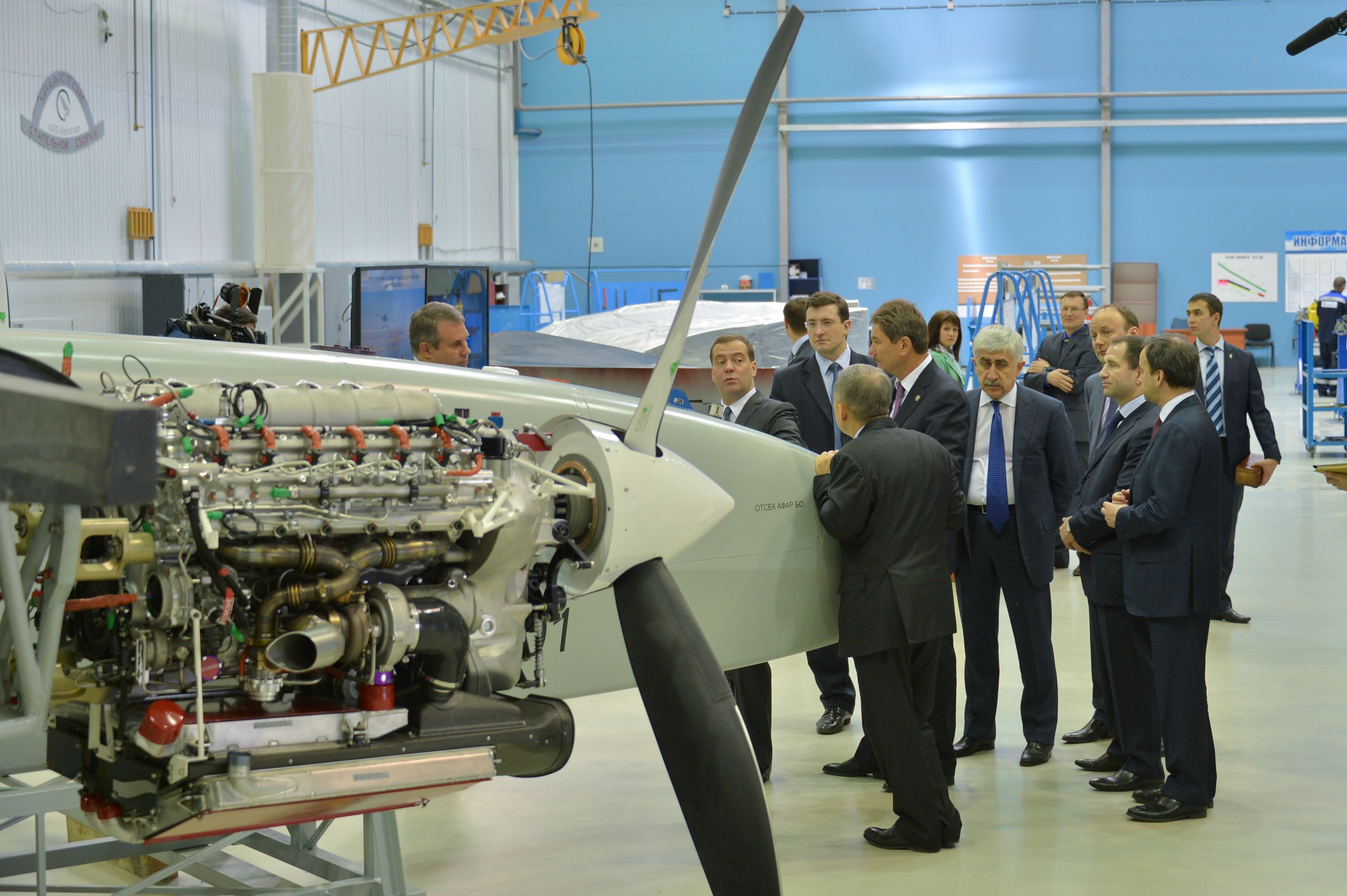 Well now only to start produce it quickly and reach initial operational capability very soon.
They need feed back to the industry all the experience they gain from actual missions of the vehicle.
GarryB

With a selection between:
Vikhrs as the general-purpose missile for most tasks
Hermes-As for targets at longer ranges
And perhaps S-25L/S-25LDs laser-guided rockets for cheap and cheerful fun at short-ranges where a good amount of explosive is needed.

If its mission is high to medium altitude flight over very long range I would think light guided bombs carried internally would be the ideal payload.

Some sat and laser guided FAB-50 bombs would be ideal for high precision strikes. Quite a few could be carried internally with no addition to drag.
magnumcromagnon

"We are ready to consider starting a development work this year with plans to complete it and move on to the official tests or experimental military use of future devices in 2017," Borisov said.

The project is being developed by the Ministry of Defense together with the Kazan-based Sokol company, recently renamed after prominent Russian aircraft designer Mikhail Simonov. The deputy minister noted that the company had listened to critical comments, and in the past year and a half the program was revised and positive changes are already noticeable.

"I am convinced that all of the components for the future project and the results of the research work, which is almost finished, may allow us to start the development with minimal risk. We have already decided that we will start our work this year," Borisov stated.

The deputy defense minister stressed that reconnaissance and assault drones are in high demand today, and that the Russian Ministry of Defense pays special attention to this area.

In the future, UAVs will be able to solve strategic military problems due to their stealth and greater combat stability compared to manned aircraft, Commander-in-Chief of the Air Force Lt. Gen. Viktor Bondarev said.

The Russian Defense Ministry said on May 20 that it would spend some $9.2 billion on UAVs in the period to 2020, and that defense experts would train the country’s soldiers to operate those drones.
Viktor

We have a date for the ultimate beast

Any idea which type of UAV they used to track down the Ukrainians?
Austin

So is Gonshchik and OKhotnik supersonic UCAV ?
eridan

the image itself says they're not. 1000-1100 km/h top speed, so they're high subsonic.
magnumcromagnon

Yes, they're only slightly slower than Mach 1.
GarryB

The technical term for aircraft able to fly at 1,100km/h is transonic... they should be able to fly supersonically in a dive...
Austin

Why not make it supersonic , Why keep it transonic ?
GarryB

Why not make it supersonic , Why keep it transonic ?

Ask yourself why not make the Yak-38 supersonic, or AWACS aircraft supersonic... or indeed the Su-25 supersonic.

Just looking at the information on the page that came with that chart the engines being used are RD-33s but without afterburners. This makes them lighter and simpler and likely cheaper. It also reduces their thrust and their IR signature.

When developing an aircraft you need to decide on its parameters... like speed, altitude, range performance. All these factors are effected by weight and available space and today RCS and IR signature are aspects as well.

Just look at the difference between a U-2 spyplane and an SR-71 spyplane... both have very similar missions, though ironically the U-2 flew over enemy air defences, while the SR-71 flew down borders when it was no longer possible to fly over air defences and remain inside the atmosphere.

The design of the SR-71 is completely different and focused almost completely on speed.

I am sure the Russians likely have some secret UAVs that also focus on high speed to slip in and out of enemy territory, but I suspect these UCAVs and UAVs are more intended to loiter for long periods on station in places it would not be safe to send manned aircraft.

higher speed would not make the aircraft that much safer but will shorten time on station and also likely require different wing shapes and aerodynamic shapes too.

High drag bumps and bits that stick out... like EO balls and various external antenna can be used on subsonic aircraft but produce unnecessary drag on a supersonic aircraft.

Long story short achieving supersonic speed would require specific design, while the roles intended for the aircraft might not gain much benefit from having supersonic flight speed... even for very short periods.

Note changing to a low bypass jet with afterburners and fitting them to a Tu-95 would increase flight speed but totally ruin flight range yet would not allow supersonic strategic flight.

The Tu-160 on the other hand can fly about 10,000km at supersonic cruise with its wings folded back in low drag flight.
Austin

Thanks Garry , Since the 20 T UCAV was based on T-50 PAK-FA design as they mentioned it would be , I was expecting it to be supersonic.

The Mig working on 5 T UCAV was a surprise I want expecting that.

I think if they are going for high subsonic design then most likely the 5 T and 20 T UCAV will be very stealthy.
GarryB

Thanks Garry , Since the 20 T UCAV was based on T-50 PAK-FA design as they mentioned it would be , I was expecting it to be supersonic.

It might weight 20 tons but look at the engine power... 52KN thrust per engine... that is the dry thrust of an RD-33 and would never allow a 20 ton aircraft supersonic flight speed.

... an RD-33 in AB generates about 82KN thrust per engine, with the dry thrust something like 50KN.

I suspect these UAVs... well they are likely UACVs, will have low powered engines to improve fuel fraction for extended range and endurance at the expense of top speed and high agility.


I think if they are going for high subsonic design then most likely the 5 T and 20 T UCAV will be very stealthy.

Most UCAVs seem so far to have poor situational awareness.. which suggests to me the best way to design them is so that they can fly as high as possible and be hard to reach and detect. Having very high speed is one way to avoid interception, but when your job is to look at the enemy for long periods max speed is not so important and indeed counter productive.

Regarding sanctions that is probably better discussed on an economics thread, but when push comes to shove most of the Ti being used for the F-35 is coming from Russia who corners the market in the material.
Austin

Which is odd really because that could just as easily be Skate from MiG...

The lack of afterburner however suggests perhaps much longer wings with a subsonic flight design.

I hope they are working on optimised weapons for these aircraft... I would suspect a KAB-50 would be ideal from high altitude using laser homing, perhaps combined with satellite navigation to give very high accuracy. Very high accuracy would mean the combined high kinetic energy with a fairly decent HE capacity of 50kgs of HE should make it a very effective weapon able to destroy a vehicle without destroying the whole block. Equally it is a fairly small compact weapon that should be able to be carried in large numbers.
Austin

I think the Mig UCAV design of 5 T is Skat on Lite Diet.

It is half the weight of Skat UCAV and carries half the weapon load and they mentioned in the article that they will take inputs from Skat.
magnumcromagnon

It is half the weight of Skat UCAV and carries half the weapon load and they mentioned in the article that they will take inputs from Skat.

I still don't understand why they cancelled the original Skat UCAV, I mean they gave T-50 PAK-FA program to Sukhoi, then they gave Sukhoi the UCAV contract, it's like they want Sukhoi to be overloaded with work and have Mig struggle to get funds...I know the Mig-35 is being funded but showing so much favoritism towards one design studio/bureau (Sukhoi) can't be healthy.
Sponsored content