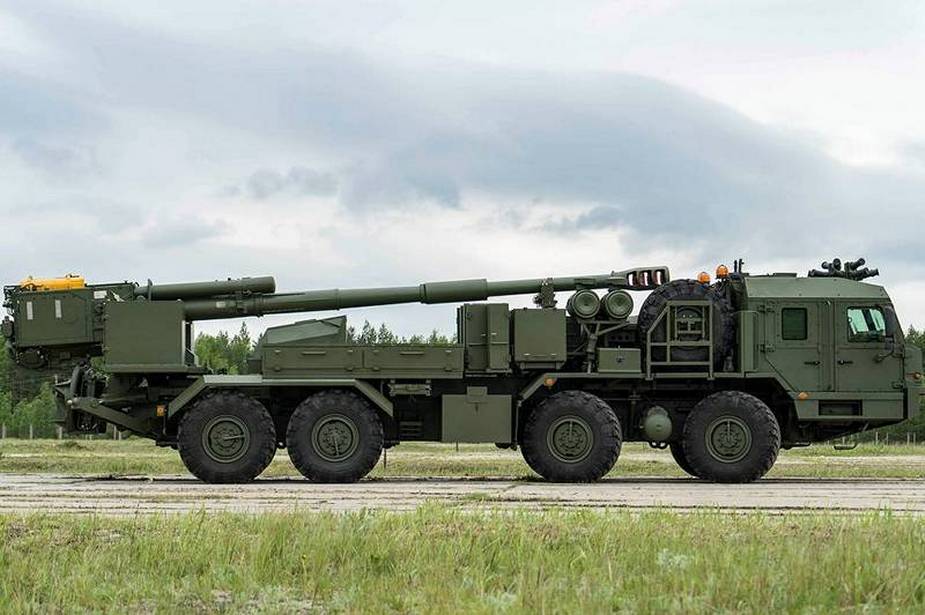 The new 2S43 Malva is based on 8x8 military truck chassis BAZ-6010-027 manufactured by the Bryansk Automobile Plant. The vehicle has a crew cab at the front while the artillery weapon system is located at the rear. In the Russian army, the 2S43 could replace the 2A65 MSTA-B and the 2S1 Gvozdika 122 mm self-propelled howitzer based on tracked chassis.
According to Russian military sources, the 2S43 Malva is armed with the 152mm 2A64 cannon which is also used on the 2S19 MSTA-S. Our first analysis based on the pictures released on the Internet, shows that the 2S43 has a semi-automatic loading system. As for the French CAESAR, the rear part of the truck chassis is fitted with a large hydraulically operated spade that can be lowered on the ground to provide a more stable firing platform during firing operations.
The 2S43 Malva has a rate of fire of 8 rounds per minute thanks to the use of a new gun-loading mechanism. There is no public information about the tactical and technical characteristics of this new Russian artillery system due to the secret development of the project.

Why on earth does the army need many 152mm artillery vehicle? They have Giatsint-S Msta and soon Koalitsiya.

They are spending money on new types of long range ammo for the 152mm and other calibres of gun, so it is nice to have lots of guns to use that ammo.

Compared with a tracked vehicle I think the costs involved are significant... this new wheeled vehicle could drive 200 thousand kms easily before you would need a full service and overhaul, whereas most tracked vehicles need regular checks... obviously the wear and tear on tracks is enormous and made worse when moving on roads, whereas a wheeled vehicle is at home on a road and can move at high speed for long periods...

They are going to have a variety of vehicle types and platforms but for independent artillery forces something like this will be cheap and mobile and fast.... and devastating.

It seems to have a special gun loading mechanism will will be interesting to learn more about... perhaps some sort of stacked ammo handling magazine or rotary loader that is likely hand loaded to start with but perhaps allows a volley of rounds to be fired and then for the force to move to a new location where it can be reloaded and fire again.

Will be interesting to learn the details of the system...