The rocket is required to be manufactured and delivered by October 15, 2021 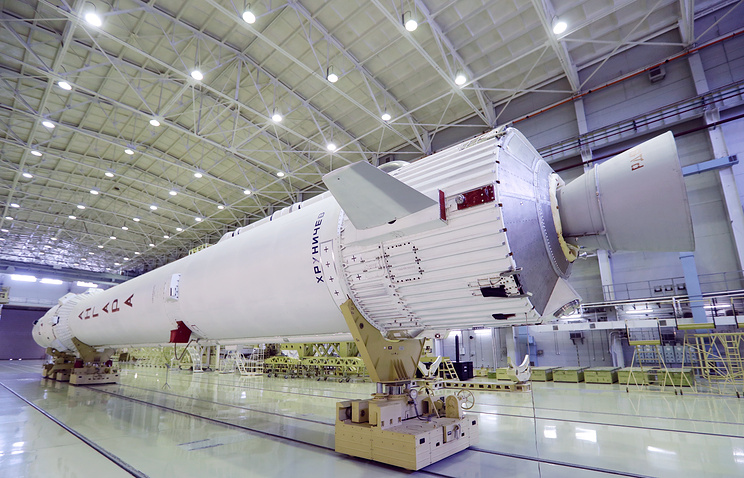 MOSCOW, June 10. /TASS/. Russia’s State Space Corporation Roscosmos has placed an order to the tune of 2 billion rubles ($31 million) for the manufacture of a light Angara-1.2 carrier rocket for the launch of Gonets-M satellites, according to the information posted on the government’s procurement website on Monday.

"The manufacture and the delivery of an Angara-1.2 carrier rocket for the launch of Gonets-M Nos. 33, 34 and 35 satellites. The initial (maximum) price of the contract is 2.028 billion rubles," the statement says.

According to the technical assignment, the rocket is required to be manufactured and delivered by October 15, 2021.

A light Angara-1.2PP was launched in July 2014. The rocket carried a spacecraft mockup. Now the Russian space agency has placed its first order for this rocket for launching real satellites.

Bids for an open tender, which will be held electronically, will be accepted through July 11, 2019.

"The supplier will be required to provide quality warranty for the products supplied. The warranty period shall be no less than ten years from the date of signing a document on the products’ acceptance by the state customer. Operational readiness and acceptance tests should be carried out in compliance with GOST state standards and technical conditions in the process of controlling the quality of the Angara-1.2 carrier rocket," the tender’s documentation says.

the trouble with these smaller rockets for LEO satellites - is they spend 1/2 their time competing with "decommissioned" ICBMs like the Rokot
so they always seem "expensive" by comparison …. maybe the Russians are finally running out of "Rokot"s

if they did that …. then every launcher the Russians use will be derived from the original RD-170 …
which started life as reusable boosters for the Energia/Buran ….

one thing is for sure …. the bodies of those guys that embezzled all the money will be buried under a hell of a lot of concrete ...

meanwhile the space city nearby is being expanded Tsiolkovsky

things are happening …. Gazprom is putting gas pipelines into Tsiolkovsky city too
from the nearby (massive ) Amur gas processing plant

apparently they are looking at the Angara boosters flying back to the airport
that the Bartini group are worked on again …..the Baikal project resurrected
so guess it makes sense to understand what you need for them first

those Baikal flyback boosters are pretty big …. easily bigger than a Mig-31 ….
what a strange airport that would be - with squadrons of 4 jet powered boosters flying back in ….

that would be worth seeing as a tourist …. watch the launch from the airport …. then see the boosters come flying in
30 minutes later …

MOSCOW, November 2. /TASS/. Air trials of Angara carrier rockets will continue, a source in the press service of Russia’s State Space Corporation Roscosmos told TASS on Saturday, adding that serial production is planned to start in 2023.

"According to production plans of the state corporation Roscosmos, serial production of Angara carrier rockets is being set up and will be started in 2023 at the Polyot Production Association (Omsk). Currently resumption of air trials of that promising rocket is being prepared," the source said.

MOSCOW, February 12. /TASS/. The second test-launch of Russia’s Angara-A5 heavy carrier rocket is scheduled for the second-third quarter of this year, CEO of the Khrunichev Space Center (the Angara rocket manufacturer) Alexei Varochko said on Wednesday.

"The launch [of an Angara-A5] will take place in the second-third quarter of this year," the chief executive said.

MOSCOW, February 12. /TASS/. The second Angara-A5 heavy carrier missile is scheduled for delivery to Plesetsk Cosmodrome (Arkhangelsk Region) in March-April this year, says Alexey Varochko, Director of the Khrunichev State Research and Production Space Center, the maker of the missile.

"We have a goal: March-April - the machine [Angara-A5] goes to the Cosmodrome," Varochko told Russian Veterans Union and Russian Military Commanders Club during their visit to the Center.

After that, a train will return from Plesetsk to Omsk’s Polyot engineering company to fetch modules for the third Angara and bring them to Moscow, to the Khrunichev Center, where the modules would undergo final tests and the missile would be assembled.

Angara is a family of Russian carrier missiles of light to heavy classes. The new family uses eco-friendly duel components. So far, the missile had only two launches: the light Angara-1.2PP and the heavy Angara-A5, both started from Plesetsk in 2014.

The contract is estimated at over 18 billion rubles. and must be completed before 2024, says a source in the Ministry of Defense. According to the manager of the space industry, the conclusion of this long-term contract will allow them. Khrunichev did not stop the untwisted production pending the contracting of the necessary cooperation chain, which could have happened if the conclusion of the contract had been postponed until the launch of the second Angara-A5 from Plesetsk. The first and so far the only launch of the "heavy" modification of the Angara from Plesetsk took place in 2014; currently, the Vostochny Cosmodrome is constructing a second launch pad for launching missiles of this type.

Angara is one of the most long-term projects of the Russian space industry, the decision to create this rocket to replace Proton, launched by Baikonur, which appeared on the territory of independent Kazakhstan, was made in the early 1990s. However, real funding for the project began in 2006.

According to the federal official, the decision to prematurely sign the Angara contract was made as part of the decision to prematurely conclude a number of major contracts of the Ministry of Defense in order to support the defense industry in the context of the coronavirus pandemic. These decisions include the expected contract for the supply of 76 Su-34 front-line bombers worth over 100 billion rubles, which was reported by Izvestia. In addition, a formal signing of the contract and the laying of two universal landing ships in exchange for the Mistral-class ships of this class, which were not delivered due to the embargo by France in 2014, is expected soon, the Vedomosti interlocutor says.