Kosovo is the cultural, acestrial and religious centre of Serbia
Turk1

Only because you want to claim it. Nobody cared about Kosovars while you were slaughtering the inhabitants.
Vladislav

Only because you want to claim it. Nobody cared about Kosovars while you were slaughtering the inhabitants.

Kosovo has been the heart of Serbia for hundreds of years. Do you forget the Battle of Kosovo? Even schiptars fought with them.
Jelena

Only because you want to claim it.

Turk1, please elaborate on this so I can start to post proofs of Cetnik66 claims!

Nobody cared about Kosovars while you were slaughtering the inhabitants.

What do you mean by this?
First, there is no such a nationality as "Kosovars" but it is a term used for the people who live in that region, more precisely Serbian Autonomous Province of Kosovo and Metohija. Same applies for other regions of Serbia (example: Shumadija=Shumadinac).
Second, obviously you never had a time to spend on some data research like demographics of Kosovo and Metohija trough history but I'll help!

The Dečani Charter from 1330 contained a detailed list of households and chartered villages in Metohija and northwestern Albania:
3 of 89 settlements were Albanian, the other being Serb.

The ethnic composition of Kosovo's population during this period included Serbs, Albanians, and Vlachs along with a token number of Greeks, Armenians, Saxons, and Bulgarians, according to Serbian monastic charters or chrysobulls (Hristovulja). A majority of the given names in the charters are overwhelmingly Serbian (Of 24,795 names, 23,774 were ethnic Serb names, 470 of Roman origin, 65 of Albanian origin and 61 of Greek origin). This claim is supported by the Turkish cadastral tax-census (defter) of 1455 which took into account religion and language and found an overwhelming Serb majority.

The Great Turkish War of 1683–1699 between the Ottomans and the Habsburgs led to the flight of a substantial part of Serbian population to Austrian held Vojvodina and the Military Frontier - about 60-70,000 Serb refugees total settled in the Habsburg Monarchy in that time of whom many were from Kosovo.

(Personal note: Because of the "Great Migration of Serbs" from Kosovo and Metohija, a lot of fertile land stayed vacant, which was used by Albanians who came from their mountain land and settled over there.After this moment Albanian number due to enormous birth rate started to grow rapidly.)

19th century data about the population of Kosovo tend to be rather conflicting, giving sometimes numerical superiority to the Serbs and sometimes to the Albanians.A study in 1838 by an Austrian physician, dr. Joseph Müller found Metohija to be mostly Slavic (Serbian) in character.
Müller's observations on towns:

(Personal Note: If you pay attention to numbers of the town inhabitants, Serbs vs. Albanians, it is confirming previous period, in other words, Albanians settled on vacant land and not towns, after Serbian refugees left Kosovo and Metohja.)

20th century is well presented on this graphicon: 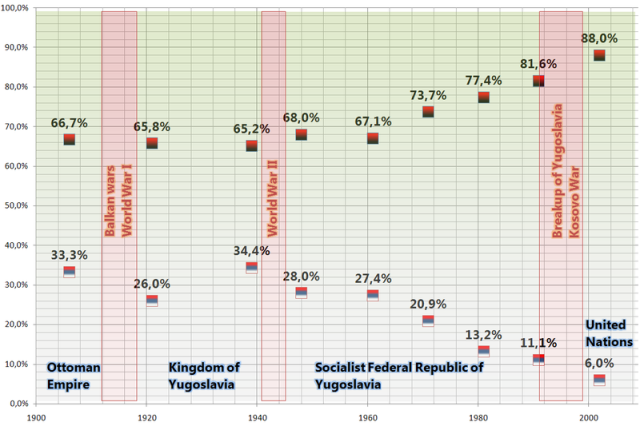 Obviously there was no oppression of Albanians on Serbian land BUT the other way around, which can be confirmed by demographic changes trough history.

Money going into capital development in Kosovo became a resented financial drain from other regions of Yugoslavia, especially Slovenia and Croatia. A continues demographic explosion of births among low- income, poorly educated Albanians who became dependents of the government increased the financial drain and increased the resentment.
By 1981 100,000 Serbs left Kosovo and as Albanians continued to move in they now constituted 77% of the population in Kosovo. Making economic development worse, the Serbs who left were better educated and technically trained than the Albanians who moved in.
From 1974 until the late 1980's Albanians in Kosovo undoubtably had enjoyed the most administrative and cultural autonomy in their history whether under Serbian, Albanian or indeed Ottoman rule, but for the Kosovars that favored independence, it wasn't enough. Some wanted status as a republic within Yugoslavia, while others favored unification with Albania along with Albanians from Macedonia and Montenegro in a "Greater Albania".
Jelena

Dacic: No border between Serbia and Kosovo

Dacic: No border between Serbia and Kosovo

BELGRADE, Sept 18 (Tanjug) - Serbian Interior Minister and Deputy Prime Minister Ivica Dacic stated Friday that there is no border between Serbia and Kosovo-Metohija, and therefore no border police.

According to him, the Serbian Interior Ministry (MUP) will abide by Resolution 1244, fight for national interests, and do everything in its might to preserve peace and stability in Kosovo-Metohija, while turning Serbia into a stability factor in the region.

Really ,Serbia should grow up..

I mean try to win Kosovo back peacefully (economically) not by a flame war !

I have nothing against Serbia but this is getting old!
Jelena

I mean try to win Kosovo back peacefully (economically) not by a flame war !

I have nothing against Serbia but this is getting old!

It's not a flame war but politics...It's usually like that no matter country or problem. 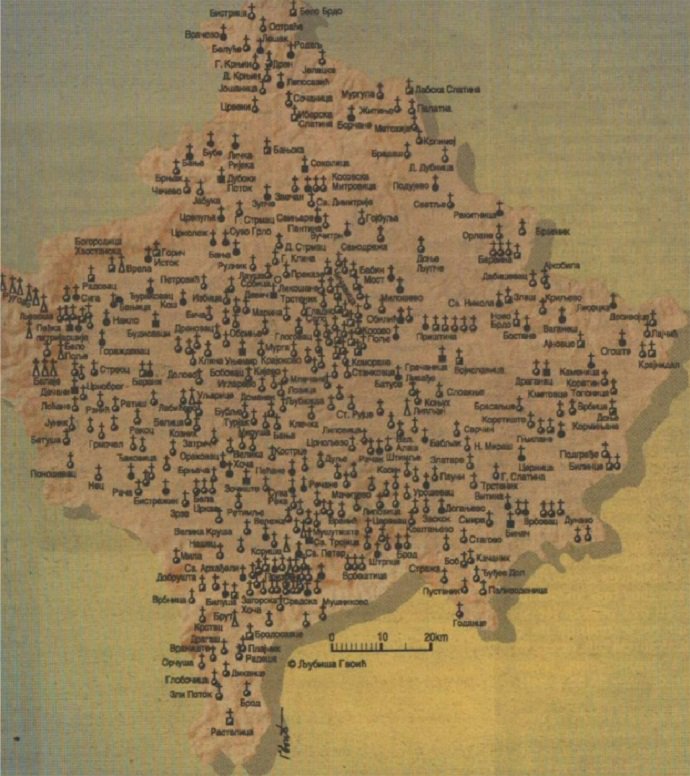 I really do not understand well which is the interest of Serbia in to control a territory like Kosovo with a 88% of Albanian population.

I understand a lot better the arguments about the Republica Srpska with Serbian population.
George1

eehnie wrote:
I really do not understand well which is the interest of Serbia in to control a territory like Kosovo with a 88% of Albanian population.

I understand a lot better the arguments about the Republica Srpska with Serbian population.

it has historical value. The battle of Kossovo for example in 1389 i think
GarryB

If an area of London had an 80% Pakistani population would Britain like to see it get independence under threat of NATO bombing if you don't let them have Sharia Law and speak their own language and force local Brits out of the areas...
Mattke

The only reason Kosovo is now a ''country'' is because of American aggression and NATO-bombing. Its fits perfectly American global strategy. Hence why Americans had to put their noses also in the Crimea affair.
Sponsored content