You are not connected. Please login or register
3 posters
Go to page :

The first man in outer space was the Soviet Union's very own Yury Gagarin.
On April 12, 1961 he managed a successful flight, which lasted for 108 minutes.
Gagarin and his famous charming smile became the symbol of the USSR.
On March 27, 1968 the star of Gagarin disappeared from the sky...
Photos of the day from the commander of the ISS Dmitri Kondratiev:
"Officers of the Air Forces of the Russian Federation on
the International Space Station

The Grand Kremlin Palace in Moscow was the scene of a concert and other
activities paying tribute to Yuri Gagarin, the first human to fly in
space. Gagarin's historic launch took place 50 years ago on April 12,
1961. Russian and American space officials and other dignitaries were
on hand for the event.
Aramonik

Docking with the International Space Station is scheduled for
April 29 at 18 hours 29 minutes to the docking compartment
Pirs.
Shooting TO KC "South" (Studio Space Agency).

SpaceX Not Allowed To Dock With ISS Until Safety Proven-Roscosmos 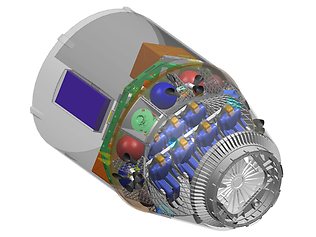 Russia will not permit the first U.S. commercial spacecraft
to dock with the International Space Station (ISS) unless
its safety is fully tested, a high-ranking Russian space
official said on Friday.

The statement comes in the wake of media reports that the
spacecraft's designer, U.S. company SpaceX, requested NASA
to authorize the docking in December.

"We will not issue docking permission unless the necessary
level of reliability and safety [of the spacecraft] is proven.
So far we have no proof that those spacecraft duly comply
with the accepted norms of spaceflight safety," said Alexei
Krasnov, who heads the manned spaceflight department of
Russia's space agency Roscosmos.
He said that to authorize docking, the Russian space agency
will need to study data about the demonstration flight due
to take place later this year.

"We have received no requests from NASA on the issue," the
space official said.

"This plan is realistic, and ultimately commercial spacecraft
will be able to dock with the space station," he said. "But
all in good time."

SpaceX, a commercial company, signed a contract with NASA to
develop both the Falcon-9 carrier rocket and the Dragon vehicle.
Last December, SpaceX orbited the Dragon onboard its carrier
rocket and demonstrated orbital maneuvering, before the vehicle
reentered the atmosphere and was recovered in the Pacific.

According to the SpaceX 2011's launch schedule, two Dragon
flights are to take place in 2011. During the first flight,
the spacecraft will perform the flyby of the ISS, approaching
to within 10 km from the station. During the second mission,
it is hoped to dock with the ISS.

Two space shuttle Endeavour astronauts are spacewalking outside the
International Space Station. Drew Feustel and Gregory Chamitoff's
spacewalk is scheduled to last about six and a half hours.
Aramonik

A video recap of flight day 5 of the STS-134 mission of space shuttle
Endeavor to the International Space Station.
Последний экипаж шаттла

Soyuz Commander Dmitry Kondratyev, and Flight Engineers Cady Coleman
and Paolo Nespoli bid farewell to their Expedition 27 crewmates and the
visiting STS-134 astronauts as they prepare to leave the International
Space Station for their return to Earth.
JAXA Astronaut

Satoshi Furukawa, a Japanese doctor turn into an astronaut, departs to
International Space Station in June 2011. His passion & hard work enables
him to be an astronaut and finally going to Space. His flight will lead
to the bright future of a human kind.
Aramonik

Behind the Scenes: Soyuz Landing Support

NASA Public Affairs Officer Josh Byerly talks to ground support personnel
and mission officials in Russia and Kazakhstan as they prepare for the
landing of Expedition 27 on May 23, 2011. Crew members Dmitry Kondratyev,
Cady Coleman and Paolo Nespoli returned home aboard the Soyuz TMA-20
spacecraft while space shuttle Endeavour and the STS-134 crew were still
docked to the International Space Station.