Salyut 1 was the first DOS long duration orbital station. The 'civilian' DOS station was
built on basis of the military Almaz stations with the mission of beating the American
Skylab in the space station race and to determine the usefulness of manned observation of
the earth by 1974. DOS-1 was launched as Salyut 1 on 19 April 1971. The triumph turned
to tragedy when the Soyuz-11 crew died due to de-pressurization of their re-entry capsule
during return to the earth. DOS was started only when the Soviet moon project failed,
in order to beat the American Skylab to orbit. It was created using spaceframes from the
Almaz military station program.

those videos explain some of the aspects of the millitary and technological achievements
of the two superpowers during the cold war. Video in Russian. Mir (Russian: Мир; lit.
Peace or World) was a Soviet (and later Russian) space station. Mir was the world's first
consistently inhabited long-term research station in space, and the first of the third
generation type of space station, constructed from 1986 to 1996 with a modular design.
The station was in operation for fifteen years until 23 March 2001, when it was deliberately
de-orbited, breaking apart during atmospheric re-entry over the South Pacific Ocean
The Almaz (Russian: Алмаз - "Diamond") program was a series of military space stations
(or "Orbital Piloted Station" - OPS) launched by the Soviet Union under cover of the
civilian Salyut DOS-17K (Orbital space station) program after 1971.

Salyut 2 failed shortly after achieving orbit, but Salyut 3 and Salyut 5 both conducted
successful manned testing. Following Salyut 5, the Soviet Ministry of Defense judged in
1978 that the time consumed by station maintenance outweighed the benefits relative to
automatic reconnaissance satellites.

This is a short vid of a Proton launch.

And this is a nice clear shot of another Proton launch where the camera follows the rocket and doesn't get knocked over from the blast:

Wonderful Videos GarryB. The sources were a bit tardy in getting vid's out for this latest Proton launch.
So thx a million for posting them.

A few new Vids for the stack.

this guy's work is 2nd to none

this guy's work is 2nd to none

It is a nice animation but such a shame the flying model has a Su-27 canopy instead of the side by side seating Su-34 canopy shown in the drawing used.

BTW I have read about a proposed nuclear powered rocket that the Russians are developing to use as a sort of space tug that can take spacecraft from earth orbit to Mars and back or can be used to scoop up some of the space junk in orbit around the earth and deal with all the dead satellites and paint chips and booster rocket material.
This is not even developed yet but have you seen any animations or mockups around the place. I don't speak or read Russian so my sources are very limited.

BTW2 thanks for the vids.
Aramonik

Russian Federation launched our program to build a powerful, multi purpose
airship that will certainly cause many people on the ground to take notice.

Airships are out of fashion mainly because of the vivid film footage of the Hnidenberg exploding.

The thing is that today with modern materials a modern airship can be light and strong and non flammable.

In fact a very large airship with lots of internal bags of helium would actually be a very difficult thing to bring down.

Traditionally an airship could be brought down with a few incendiary bullets from an MG but they ignited the hydrogen and set the aluminium structure alight. (powdered aluminium is used to make the bright sparks in fireworks and is added to HE to make High Explosive Incendiary that burns hotter and longer than standard HE.

With a modern carbon fibre helium airship you would need to repeatedly hit the airship with lots of missiles to deflate enough internal airbags to make the airship descend. Even then it wont burn well so it would actually be rather more resistant to battle damage than a conventional large aircraft.

Transporting heavy material where there are no roads or rails is one use and at the other end you could fit a large airship with enormous radar antenna and fly it in the upper atmosphere... say 40,000m or higher. It could even carry 100s of AAMs it could use to defend itself. It could have onboard crew facilities that allow 24/7 operation for weeks... especially with solar panels providing station keeping energy.

Regarding the PAK DA video... it is very nice but the flying wing model with the swing wings is the old T-4M design. This was one of the designs considered before the Tu-160 design was adopted so it has already lost to the Tu-160 design once. There must have been reasons not to use it before and it is a question as to whether those reasons still apply as to its chances now.
Aramonik

Thankx for the comments GarryB
I say we build Airship Aircraft Carriers.
The military needs to rethink the Airship
from square 1. Possibilities are endless.
Hope you like this


Inside a Soviet Almaz Spy Station 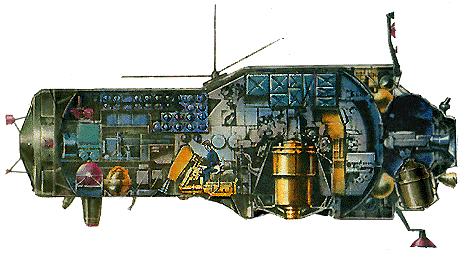 
ESA astronaut Paolo Nespoli talks to BBC World, live from the International
Space Station, 13 January 2011. The host of the show, Tim Willcox, was joined
in the studio by ESA's Director of Human Spaceflight, Simonetta Di Pippo, and
one of Europe's six new astronauts, Tim Peake.
GarryB

Nice Vids Aramonik, thanks for posting.

I read in an article about Russian airships being sold to China with radars fitted to them that the Russian airships had diesel engines inside and they could be used to heat up the gas inside the airship to give it more lift. It also had a system of condensing water from the exhaust as the fuel is burnt.

If you think about it all airships in flight weight the same as the air they are displacing which lets them float. They can fly up or down with engine thrust, but they can also rise or descend by gaining or losing weight, or gaining or losing lift.

If you think about it losing weight is easy... burning diesel fuel to run engines will lose weight as the diesel is burned. Some of that weight can be recovered by condensing the water and storing it as ballast, but you can also make the lost weight worse by increasing lift by heating the lifting gasses.

I think a good solution would be to have in the centre a large bag of Hydrogen gas with a fuel cell power source. As you burn diesel fuel and get lighter you can compensate by feeding the hydrogen into the fuel cell to create electricity and store the by product of water as ballast to compensate for the used diesel. The electricity generated by the fuel cell can be stored or used... if you store it then it can be used to convert the water back into hydrogen using the fuel cell to increase lift if you suddenly start needing lift like if you start to get covered in ice.

The alternative is to release lifting gas and while hydrogen is cheap helium is not so this little hydrogen/fuel cell combination is an excellent solution to a serious problem.

Obviously also having solar cells and using electric drives will also deal with the problem but all weather diesel engines are useful too.

The balloons sold to China contained large radar antennas and the airships themselves could be tethered to the ground and operate at altitudes from 2000-4000m in height for periods of up to 25 days with power supplied through the tether rope.

In addition to radar surveillance it could also operate as a radio relay station for up to 100,000 square kms and was much cheaper than a satellite and offered more time on station than any other aircraft.
Aramonik

these Buds for your Comrade GarryB

as I said, the Military and Corporate Aviation Oligarchs
need to redress the issue of Airships from a clean start. Based on your comments alone.
Инфографика | Группа Меркатор


ISS Crew open 2011 spacewalk marathon with 27th Russian EVA
January 21st, 2011 by Pete Harding
The International Space Station (ISS) Expedition 26 crew have conducted the Russian EVA-27 on Friday, marking the first in what is currently
planned to be a total of 10 Shuttle and ISS EVAs in 2011. Projected to be a six hour EVA, the spacewalk began with hatch opening at 2:29 PM GMT
and ended well ahead of schedule at 7:52 PM GMT - after the duo completed all their tasks without any serious issues.

The EVA was performed by Russian Cosmonauts Dimitri Kondratyev, who has been on the station since December last year, and Oleg Skripochka, who has
been on the station since October. Kondratyev is EV-1, and was wearing the read-striped Orlan-MK spacesuit, while Skripochka is EV-2, was wearing
the blue-striped suit equipped with a Wireless Video System (WVS) camera and helmet lights, both provided from NASA Extravehicular Mobility Unit
(EMU) spacesuits.

The spacewalk was Kondratyev’s first EVA, and Skripochka’s second, as he previously conducted Russian EVA-26 EVA in November 2010.
http://www.nasaspaceflight.com/2011/01/iss-crew-2011-spacewalk-marathon-27th-russian-eva/

Nephew is down to stay for the School holidays and he has been playing world of warcraft and I am down to dial up speed till the end of the month.

I'll tell you what I think of the vids then...

Thanks for finding them and posting them BTW.

I'm happy you like them Tovarich
This one will indeed interest you I think.

Hey Comrade GerryB, more agony to endure for you. hope you are doing well Buddy

ESA's Automated Transfer Vehicle (ATV) 002 Johannes Kepler docked
with the International Space Station today at 16:59 CET. ATV-2 was
launched on 16 February at 22:50 CET by an Ariane 5 from Europe's
Spaceport in French Guiana on an Ariane 5 rocket. The spacecraft
is on a mission to supply the International Space Station (ISS)
with propellant, water, air, and dry cargo.

The "Johannes Kepler" Automated Transfer Vehicle-2 docked to the
International Space Station on Feb. 24, eight days after its
launch from Courou, French Guiana. ATV-2 is delivering more than
seven tons of experiments, fuel, water, food and other supplies
to the space station.

ISS Crew Observed Shuttle Launch After ATV Docking
Cosmonauts of the International Space Station had an opportunity
to watch launch of Discovery on Feb 25 live, Dmitry Kondratiev
stated in his orbital blog in Roscosmos site. Dmitry posted a few
photos showing ATV-2 approach to the ISS on Feb 24.


Crashing into the Moon
Aramonik