The UK's new aircraft carrier, HMS Queen Elizabeth, has returned from sea trials early after a leak was found.

A Ministry of Defence spokeswoman described the leak as "a minor issue with an internal system" on Britain's biggest and most powerful warship.

The £3.1 billion ship returned to Portsmouth as a precautionary measure after the leak was found on Tuesday.

Water leaked into an internal compartment, where it was contained.

The MoD said: "An investigation into the cause is under way."

This latest problem follows a number of other issues including a shaft seal leak, which caused water to pour into the ship, and the accidental triggering of the sprinklers in the hangar.

In May the captain of the aircraft carrier was removed from the ship amid claims he misused an MoD car.

The warship was commissioned by the Queen in December 2017.

Just reading that headline, I wondered what she had said about Trump in confidential emails leaked to UK papers...

British Type 31 frigates will be built by Babcock

On September 12, 2019, the British Babcock International Group announced that it had been selected by the UK government to build five new Royal 31 type frigates. Thus, the Babcock Team 31 consortium led by Babcock, which also includes the BMT British design and industrial group, the Danish company Odense Maritime Technology (OMT) and the Thales group, won the tender for the design and construction of five promising British Type 31 frigates.

On September 19, 2019, the second completed aircraft for the Royal Navy of the United Kingdom, type Queen Elizabeth, was launched from the British shipbuilding company Abcock Marine in Rosayte to the sea to start factory tests. During the first embarkation at sea, upon completion of the first stage of factory sea trials, the ship will transfer to Portsmouth, where it will be based during the period of subsequent trials. 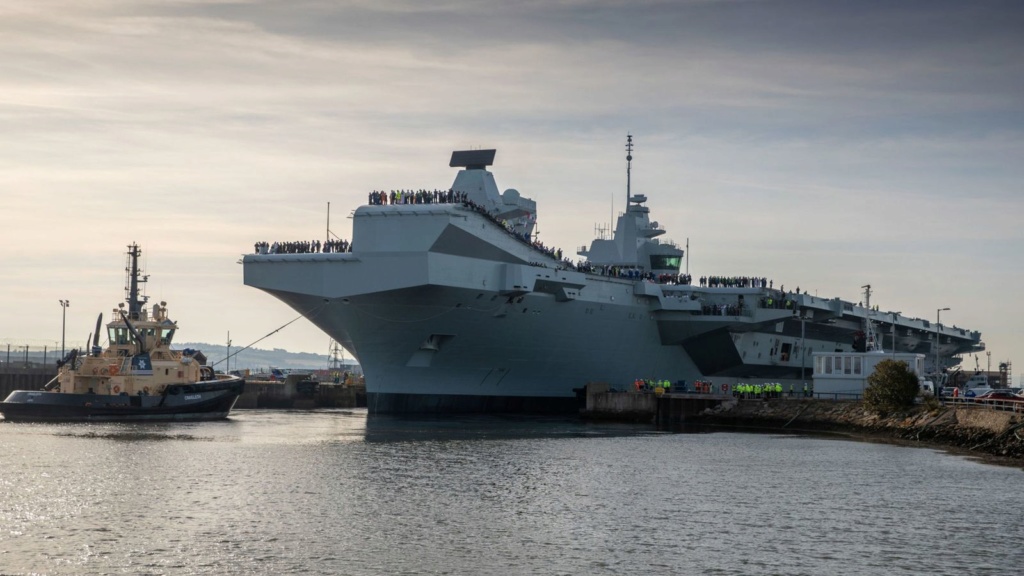 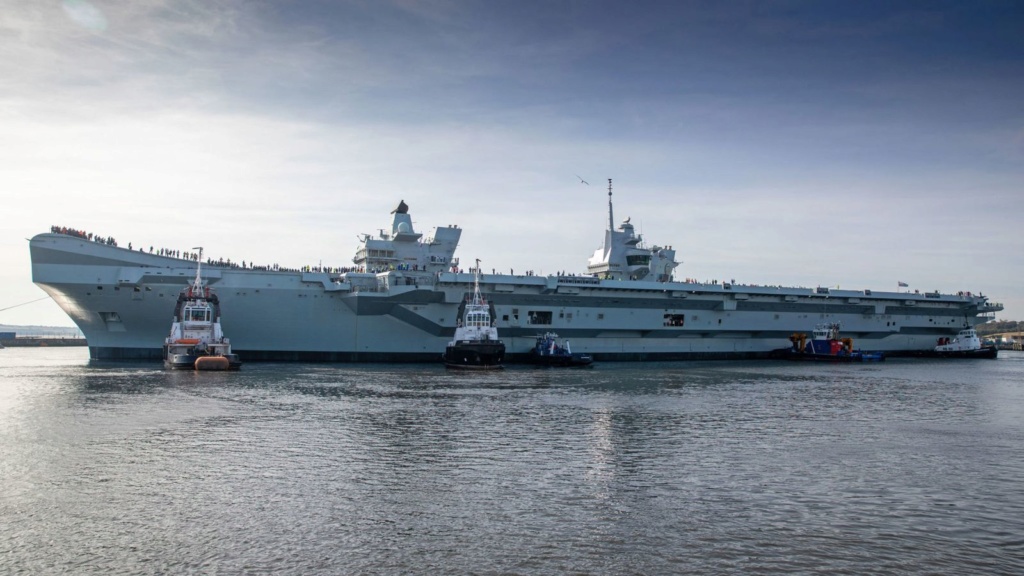 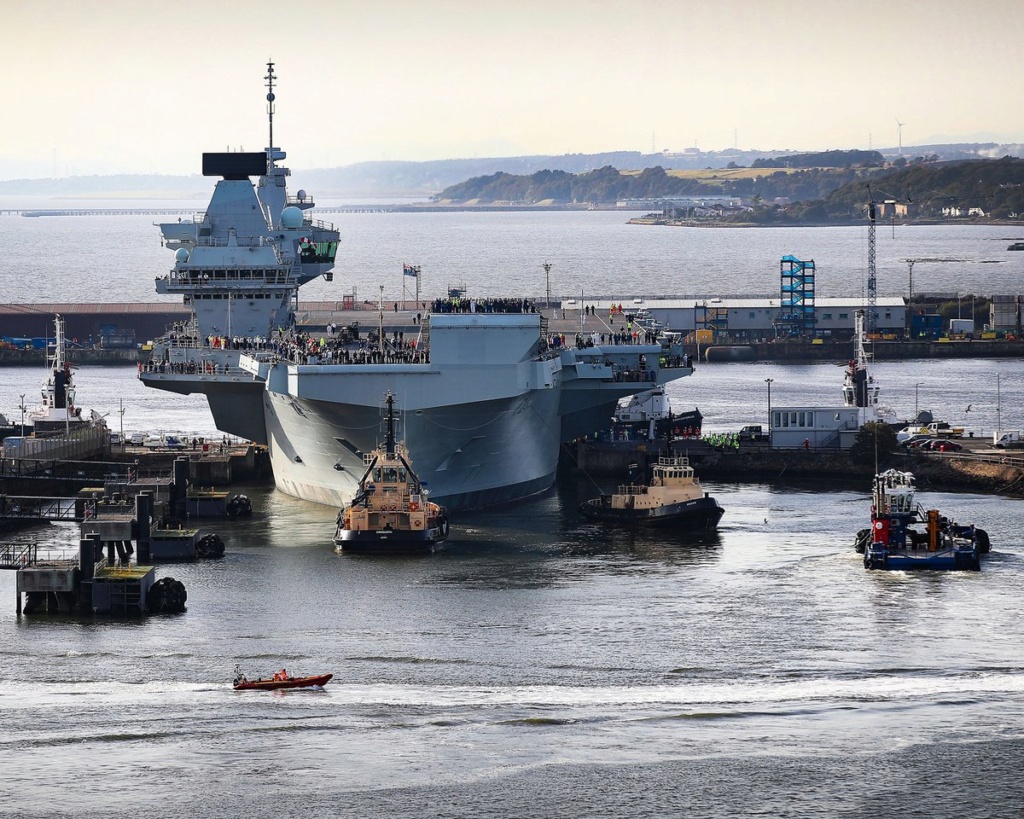 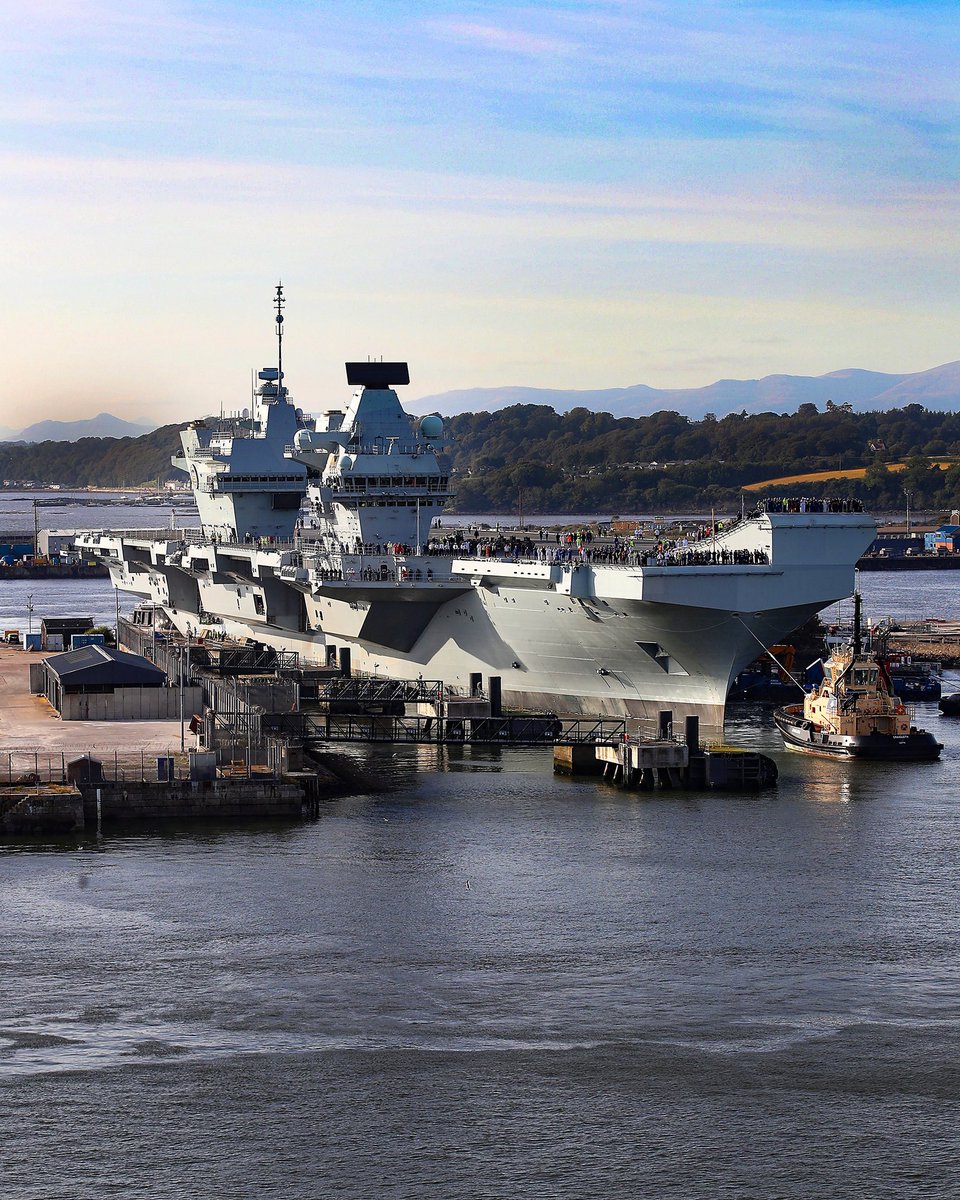 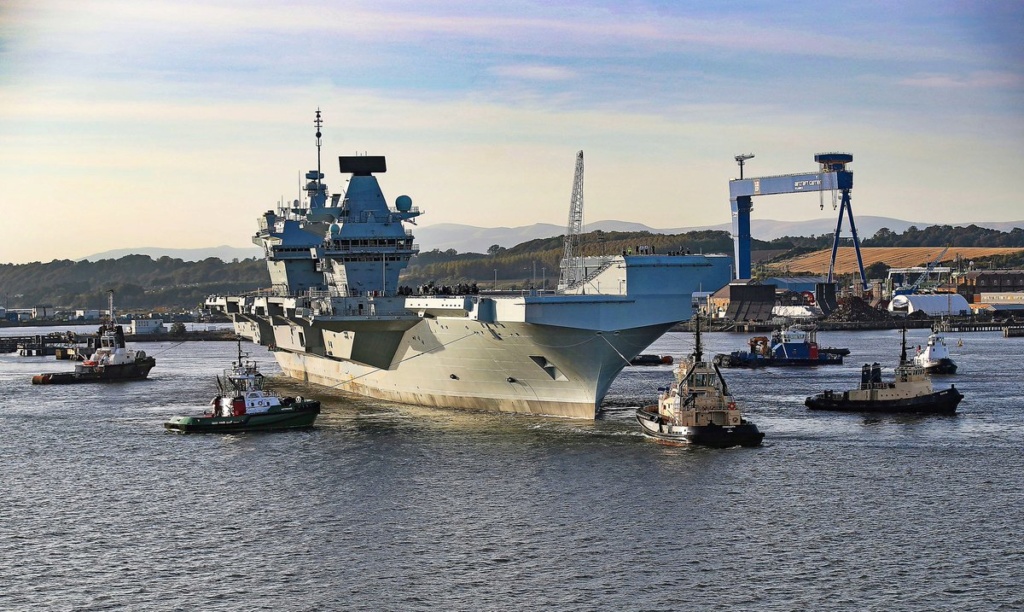 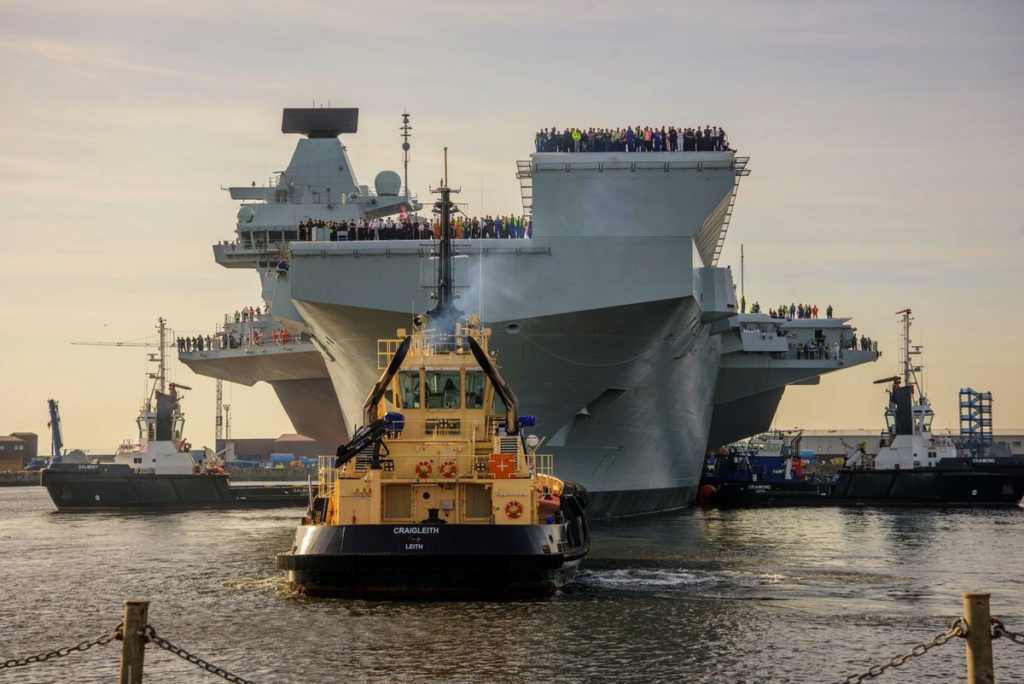 On December 10, 2019, in Portsmouth, the official ceremony of handing over to the Royal Navy the second aircraft carrier R 09 Prince of Wales of the Queen Elizabeth type built for him took place. A British naval flag was hoisted on the ship. The ceremony was attended by Prince of Wales Charles and the Duchess of Cornwall. 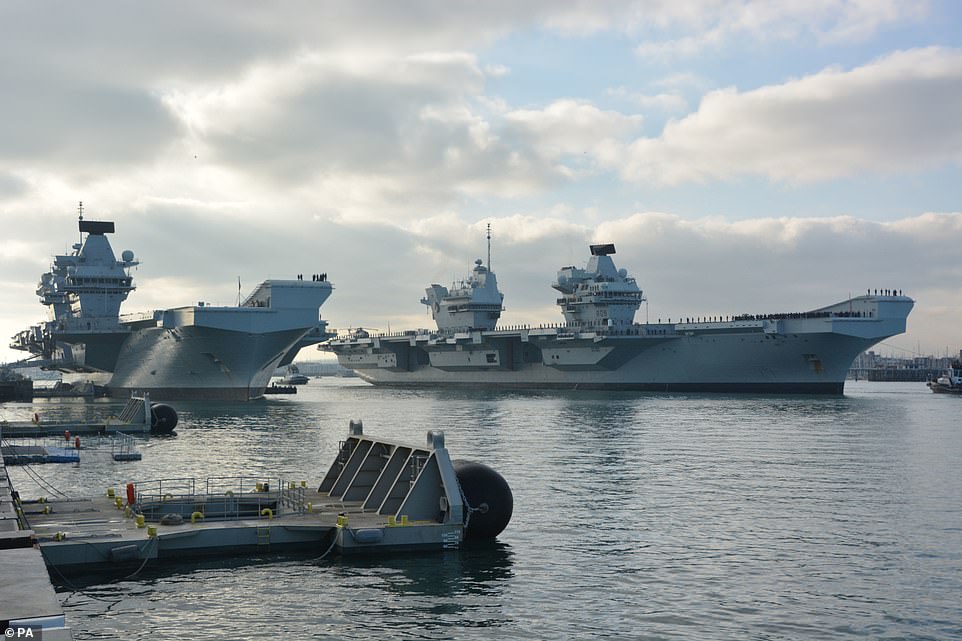 
In fact, the aircraft carrier R 09 Prince of Wales is in the testing phase. The ship first went to sea to factory sea trials from the British shipbuilding company Vabcock Marine in Rosayte on September 19, 2019 (the tests actually started on September 22) and upon completion on November 22 arrived in Portsmouth, where the lead ship R 08 Queen Elizabeth, which was introduced the UK Navy on December 7, 2017. Queen Elizabeth herself arrived in Portsmouth from the next cycle of combat training and testing off the US East Coast on December 3, 2019. It is expected that the Prince of Wales trials will last throughout 2020, and the ship itself will only reach full combat readiness in 2023.

The construction of the head ship R08 Queen Elizabeth has been in Rosyte since 2009. The Queen Elizabeth Baptism Ceremony was performed on July 4, 2014, the lead aircraft carrier was removed from the dry dock of the Rosyth Shipyard on July 17, 2014 and began factory trials on June 26, 2017. The ship was officially commissioned by the British Navy on December 7, 2017. Queen Elizabeth is scheduled to be operational in 2021.

The Prince of Wales became the Royal Navy’s largest ship in history, because it is reported that due to changes and improvements to the second ship’s design, it has a total displacement of 3,000 tons more than Queen Elizabeth (the final design displacement of the latter in most sources is characterized as 70,600 tons). 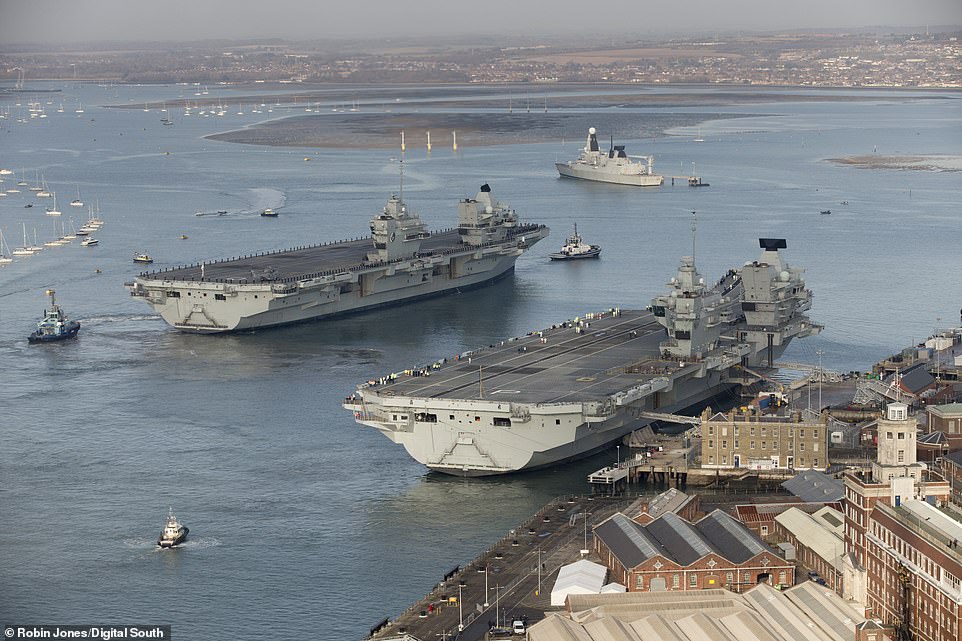 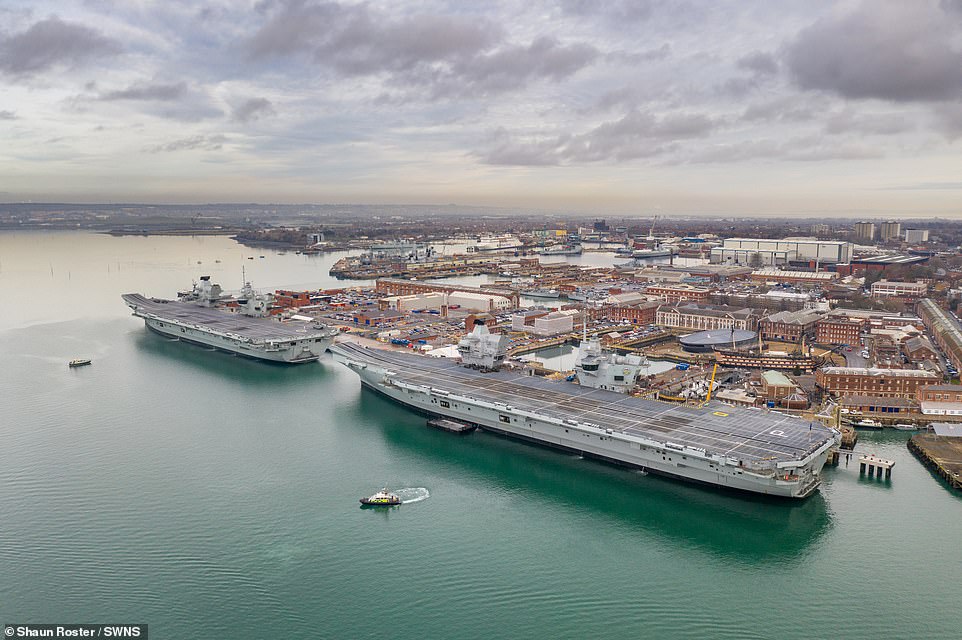 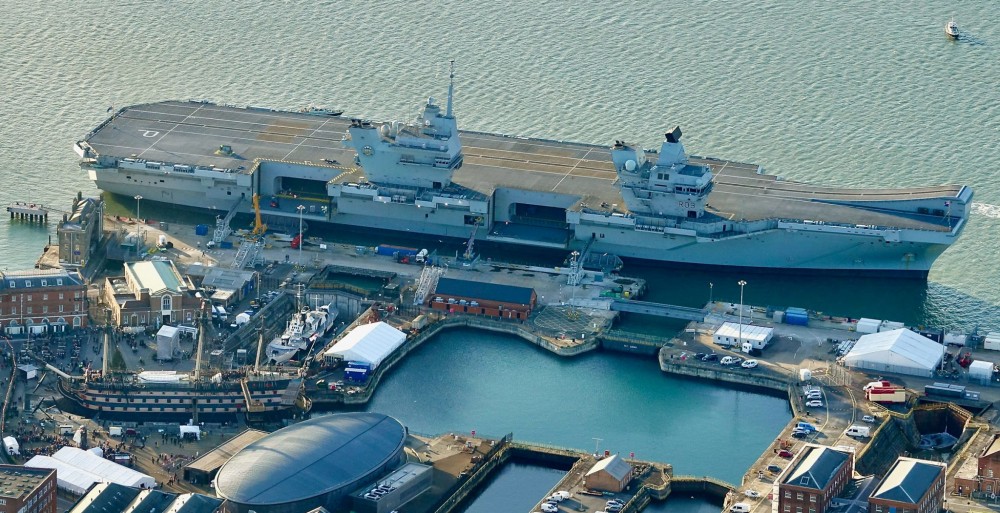 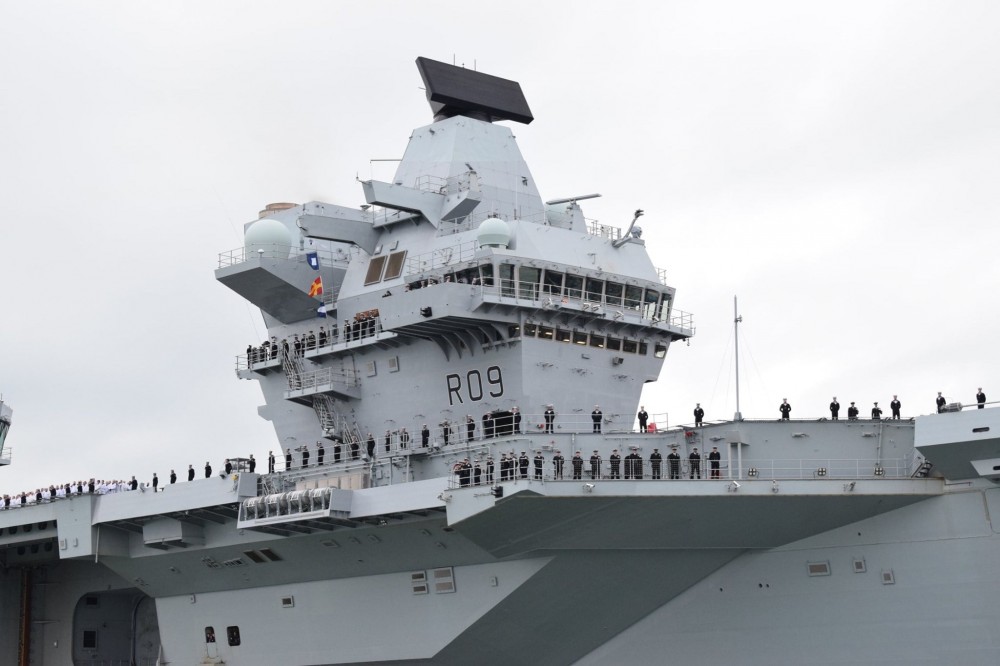 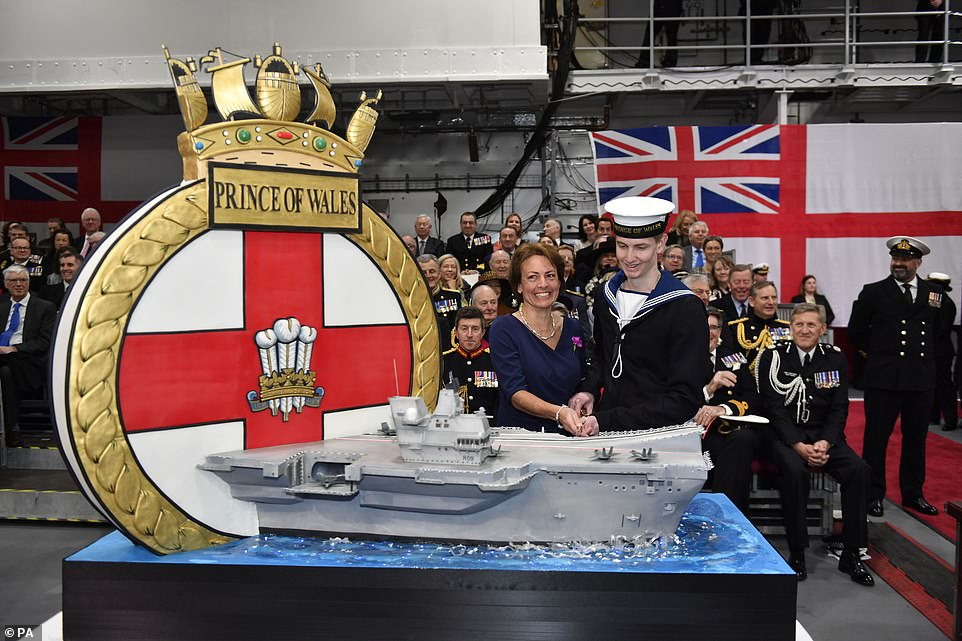 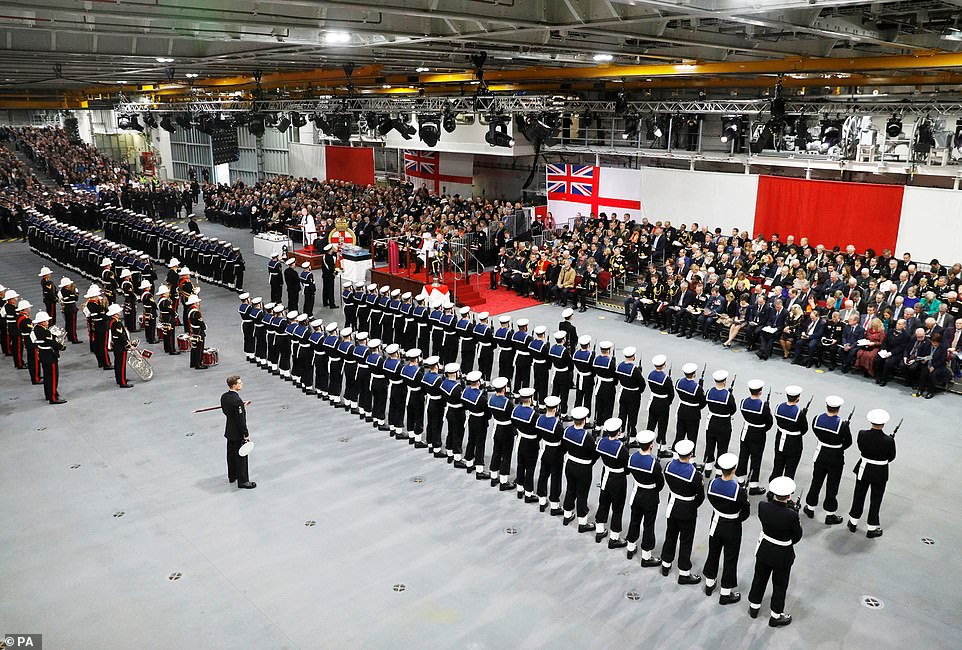 We might have two carriers but without the ships to defend them what use are they? I know carriers have few functions nowadays.

Tom Newton Dunn
@tnewtondunn
·
17h
Excl: The Royal Navy will be smaller than Italy’s for the first time because new warships have been delayed. Fleet to shrink to just 15 frigates and destroyers after MoD admission.
Isos

JohninMK wrote:We might have two carriers but without the ships to defend them what use are they? I know carriers have few functions nowadays.

Tom Newton Dunn
@tnewtondunn
·
17h
Excl: The Royal Navy will be smaller than Italy’s for the first time because new warships have been delayed. Fleet to shrink to just 15 frigates and destroyers after MoD admission.

They can't sustain 2 carriers. They should have known that.

JohninMK wrote:We might have two carriers but without the ships to defend them what use are they? I know carriers have few functions nowadays.

Tom Newton Dunn
@tnewtondunn
·
17h
Excl: The Royal Navy will be smaller than Italy’s for the first time because new warships have been delayed. Fleet to shrink to just 15 frigates and destroyers after MoD admission.

They can't sustain 2 carriers. They should have known that.

They did but they couldn't cancel as there were assembled in Gordon Brown's constituency and 5000+ would have lost their jobs. Plus it would have stoked the Scottish independence fire. The UK's MoD learning to spread work around like the Pentagon to reduce the risk of cancellations.

The “high-subsonic” Sea Venom weighs 240 pounds (110 kilograms) and measures in at 8.2 feet long (2.5 meters). Defense News noted the weapon can deliver a 66-pound warhead an estimated 12 miles away, but the precise range is unknown. It is designed to hit smaller vessels, from fast in-shore attack craft to ships as large as corvettes, as well as land-based installation.

MBDA, a consortium of missile manufacturing departments from BAE Systems, Airbus and Leonardo, is building the Sea Venom on a joint $630 million contract from the British and French governments. The missile is expected to enter service in 2021.

Jane’s noted that the Sea Venom will replace the larger Sea Skua missile, in use by the British Royal Navy since 1972, and is designed to work with the RN’s AW-159 Wildcat helicopter and the French Navy’s upcoming Guépard Light Joint Helicopter.

I remember during the Falklands war they were talking about rushing it into service with quick tests so they could use it in 1982... perhaps they were just trying to hype a weapon already in stocks but it sounded like an experimental weapon rushed into service at the time because of need.


They did but they couldn't cancel as there were assembled in Gordon Brown's constituency and 5000+ would have lost their jobs. Plus it would have stoked the Scottish independence fire. The UK's MoD learning to spread work around like the Pentagon to reduce the risk of cancellations.

That brilliant idea never seems to work out in anyones favour... I think a bean counter came up with it.

Ironically it would be brilliant if it forced the government and military to buy something that was really useful that they don't normally like spending money on... like CAS aircraft and body armour...

Nice video... but I notice a few interesting things.

First the cover for the lifting fan also acts as a big airbrake... now seeing as they clearly are using the ski jump for take off and are using the main engine in horizontal thrust position until the aircraft has cleared the ski jump to get max speed and then vector it down at 45 degrees or more to maintain height and continue flying forward... the problem of course is that the fan cover is acting like and airbrake at a time you really don't want to be using an air brake.

Having two panels split down the middle that open sideways like two half size vertical fins would allow much better acceleration during takeoff while still using the lifting fan.

Also it only landed vertically... no much more efficient rolling landings that offset the the amount of power needed to hold the aircraft in a hover by using the wings.

Notice that black patch of tarmac where the main engine is when the aircraft lands... and also not on every landing the instant the wheels hit the deck the engine shuts down immediately... no running the main engine with the nozzle pointed at the deck it seems... on landing or take off.

The Harrier they used to angle all four nozzles at 45 degrees and give it the juice... they normally got airborne well before they ran out of deck... up up and away...

I suspect what they have found with this aircraft is that full AB damages the deck so engine pointing down and hovering over the deck is limited to essential time only...

I wonder if they would not just be better without the lift fan at takeoff and using thrust vectoring to manouver into a vertical climb using the ski ramp with full AB in horizontal mode to gather the most speed energy and then as it leaves the top of the ramp angle the nozzle up to kick the nose up further at a 30 degree angle and then drop the nozzle down perhaps at a 20 degree angle down which together with full AB and the 30 odd degree upwards pitch of the nose would equate to an engine powered climb... but we know they can't run the engine in full AB for more than 90 seconds or the tail loses its stealthy coating and warps...

Really strange to see an aircraft taking off from a carrier with what appears to be a dorsal air brake deployed...

I noticed this before but this is the first good picture.

The RN clearly, in their risk assessment, decided that there was little likelihood of the carriers actually being attacked in their lives so installed full height glass windows for a panoramic view. 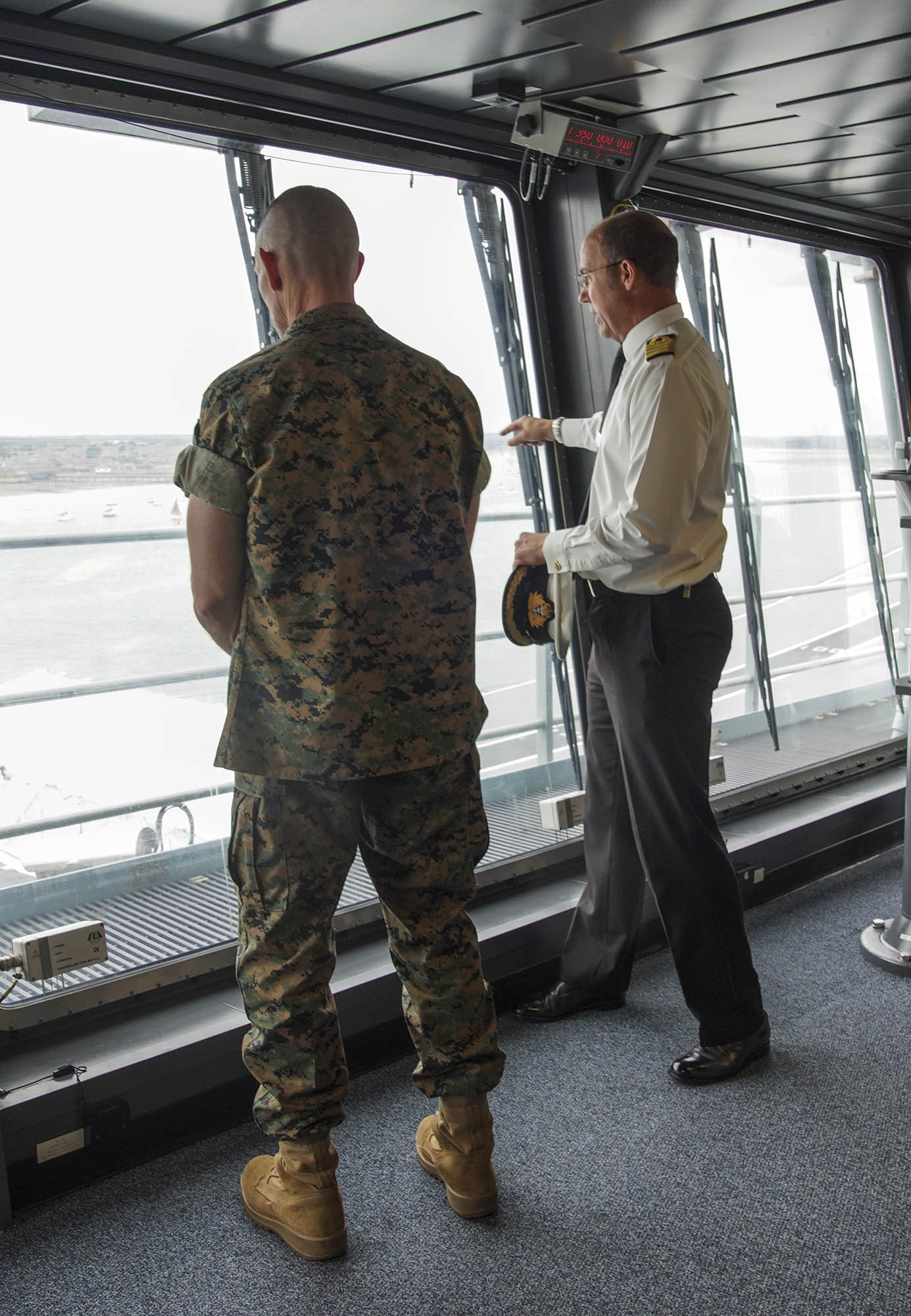 But it does look like there could be roller shutters above 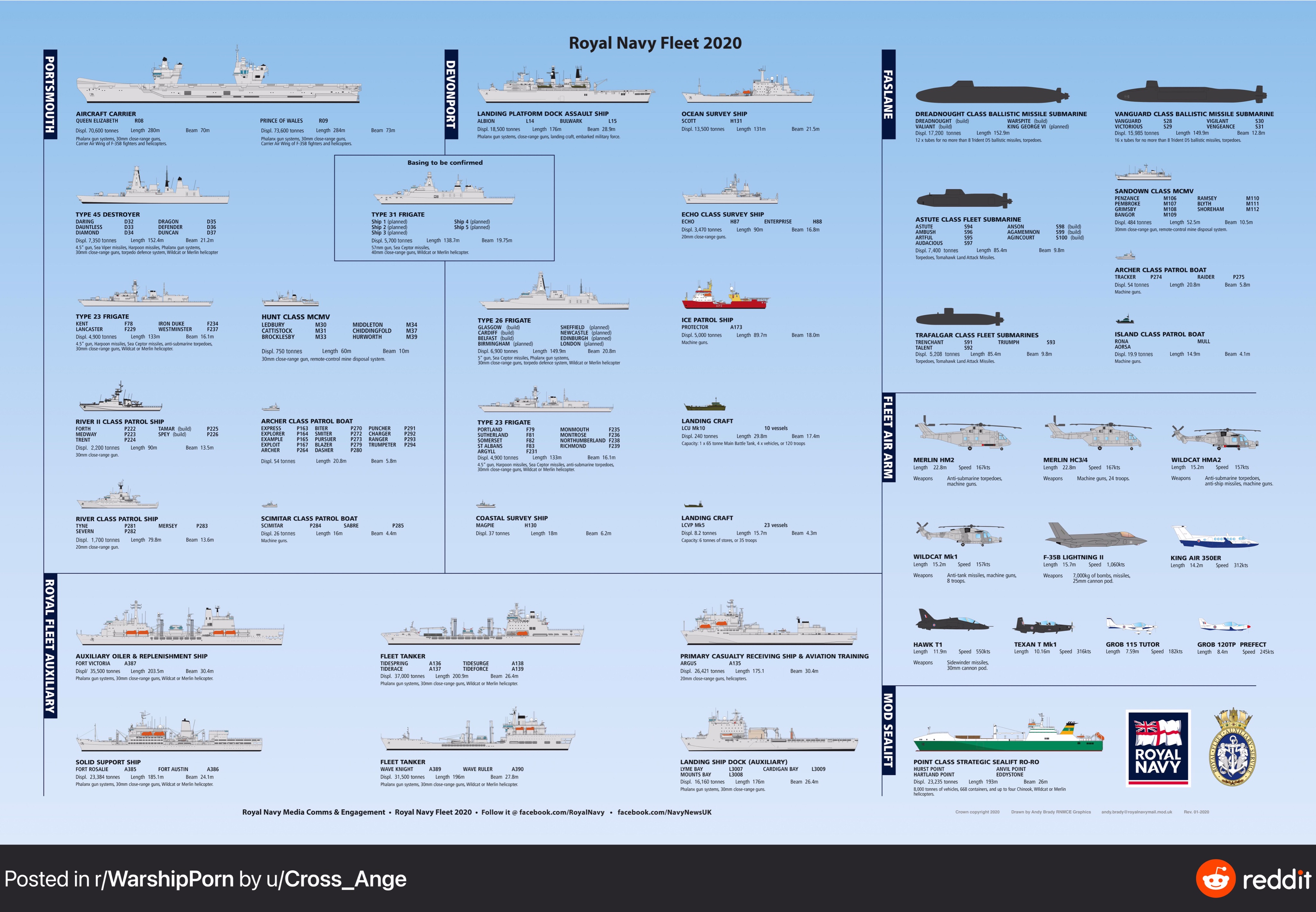 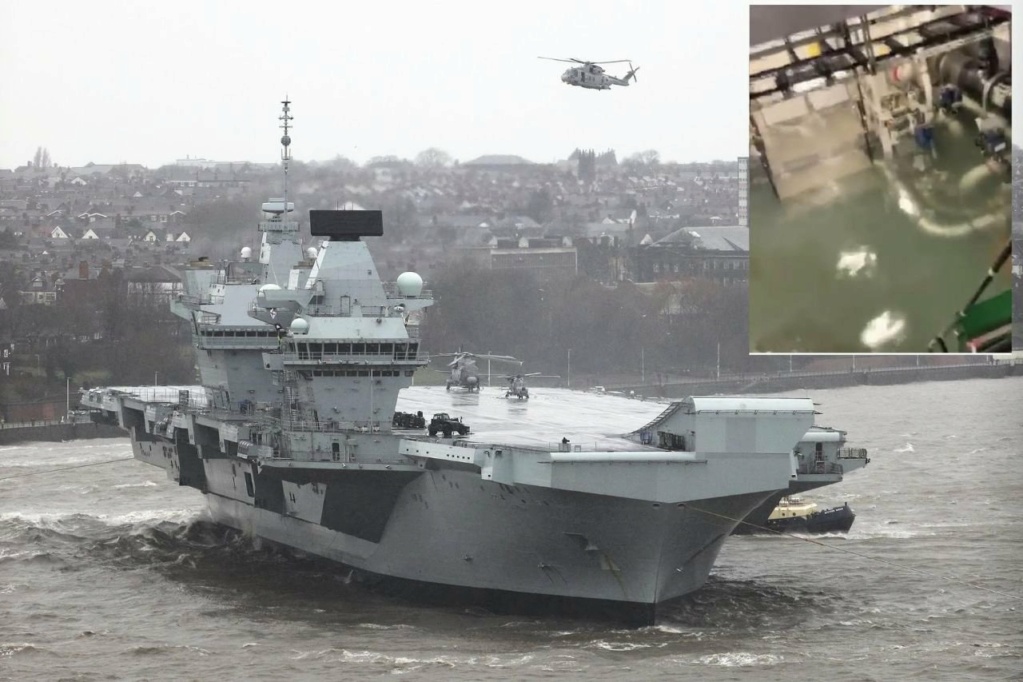 The ship is transgender. It wants to be a sub.

These carriers look ok I guess. They could have blended the ramp in with the deck better. But I think the ramp is removable.

It's more of glorified helicopter carrier than an actual aircraft carrier

The Soviet design is sleeker and better looking.
Tsavo Lion

Could you stop spoiling the forum with a same link all day ? We already saw it two times and you were already told to put your links directly and not hide them behind some hypertext. You also have to comment about what it is talking.

You are becoming annoying. The orange square on the front page redirect to your shit because you spoil the forum. We miss some real things because of that.
GarryB

They did but they couldn't cancel as there were assembled in Gordon Brown's constituency and 5000+ would have lost their jobs. Plus it would have stoked the Scottish independence fire. The UK's MoD learning to spread work around like the Pentagon to reduce the risk of cancellations.

If they don't have enough destroyers and frigates to support two carriers I would think the sensible thing to do would be to cancel one of the carriers and then use the workforce then freed up and the funding then freed up to build more destroyers and frigates to better support the one carrier you do have and also create more surface ships to allow more jobs around the place to be dealt with with the extra ships.

No need for anyone to lose their jobs... but continue with the extra carrier support stuff which could then be also used by the existing carrier so it has more support resources than it was intended to have.

So USA wants to contain Russia, UK the Chinese and what about France??

The USA & UK will contain both PRC & RF with France & Germany helping them.