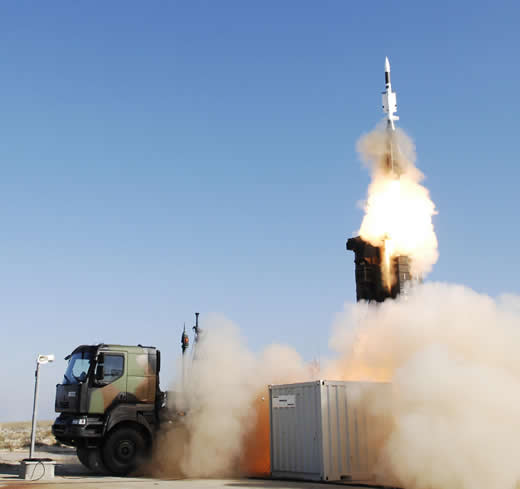 France carried out the first ballistic missile intercept with the SAMP/T Surface-to-Air Medium Range missile system last month; however, the news release about the test was delayed by one month. Considered an important milestone in the development of European missile defense capability, the test was conducted on 18 October 2010 at the DGA Missile Launch Test Centre (CELM) in Biscarosse in southwest France.

According to the DGA, the target used for the firing was representative of a medium-range ballistic missile. This firing deployed the Aster 30 Block 1 missile variant developed for the French Air Force’s ‘Mamba’ medium range air defense system and optimized for the interception of aerial as well as ballistic threats.) SAMP-T is the first European missile system offering missile defense capability. It is one of several systems considered by the NATO Active Layered Theater Ballistic Missile Defense (ALTBMD) program.

The Aster program is the most ambitious European missile program ever launched and the second largest defense program managed by OCCAR after the A400M tactical transport aircraft. Aster missiles are currently deployed with three European navies (rance, U.K. and Italy all operating the Aster 30) and two international navies – Saudi-Arabia and Singapore, operating the Aster 15. SAMP/T was declared operational in September 2010 with in French Luxeuil Air Defence Artillery squadron. Turkey is also interested in the SAMP/T capability.

According to the manufacturers, during the test the systems successfully performed all the intercept phases, from target detection and designation and handoff to the fire control module, target acquisition by the ARABEL radar, computation of engagement sequence and firing decision. The target was intercepted at the intended range.

(SAMP/T is the acronym for Surface Air Moyenne Portee Terrestre)

Missile defense remains the hottest of hot topics for NATO in Europe, and as various U.S. solutions vie for attention, European industry has stepped up to the plate to show what it can do.

The latest firing by a Eurosam SAMP/T air defense system against a tactical ballistic missile (TBM) has been hailed by NATO as “the first European theater missile interceptor to achieve NATO interoperability.” In a live-fire test at France’s Biscarrosse ranges the system destroyed its target and proved able to work with NATO’s interim ballistic missile defense (BMD) command and control (C2) system. “This successful test is a milestone as it broadens the range of capabilities available for use in NATO’s missile defense,” says Alessandro Pera, director of the ballistic missile defence program at the NATO Communication and Information Agency.

More details have emerged about the interception, conducted in March by a SAMP/T unit with a joint French Air Force and Italian Army crew. It was the third anti-TBM (ATBM) engagement by a SAMP/T system, the second by an operational crew and the first to be conducted within a NATO C2 environment. As such, it was a significant demonstration of the SAMP/T system’s ability to operate as a NATO asset when providing ATBM defense for deployed troops.

The SAMP/T is produced by Eurosam, a 50:50 joint venture between MBDA and Thales. Its key components are the Aster 30 interceptor and Arabel multi-function radar. With up to six mobile launchers (each with eight missiles) the system can simultaneously engage 10 targets in a full 360-degree hemisphere – with a look-down/shoot-down capability – at ranges of up to 120km. The French Air Force was the first to reach operational status with the system – which it calls Mamba – in October 2011. The Italian Army’s first regiment followed in June 2012.

As with the previous SAMP/T ATBM trials in 2010 and 2011, the target in the 2013 test was described as a “TBM 300, with the equivalent range, speed and radar cross section of a 300-km tactical ballistic missile.” All three tests involved a Rafael Black Sparrow high-performance target launched by an Israeli Air Force F-15 aircraft. The Black Sparrow, replicating a Scud-B missile, flew a ‘medium energy trajectory’ after launch over the sea and was aimed at a point on land about 10km from the SAMP/T batteries.

Two firing units were deployed, with their Arabel radars and (single) Aster 30 launchers positioned about 10km apart. These units communicated with each other via Link 16 MIDS. The same datalink connected the target cueing radar at Biscarrosse with the missile units. Using Link 16 Simple Biscarrosse was connected to the DGA’s Maîtrise de l’information (DGA-MI) weapon systems test center at Rennes. Finally, DGA-MI was connected to NATO’s Ramstein BMD Operations Center with the Link 16 Joint Range Extension system, over satellite. This varied communications network showed how the SAMP/T system can be integrated with higher echelon or battalion-level commanders, and also how the system is interoperable over multiple modes.

After a year’s preparation, the entire engagement – from target launch to interception – took less than five minutes. Some 38 seconds after launch, the hit-to-kill missile destroyed the target with a relative impact speed of Mach 8. This was the 13th successful interception (in 13 firings since 2005) by the land-based SAMP/T system; 10 against air-breathing targets and three against TBMs. According to NATO this was the final test of SAMP/T capabilities and interoperability with NATO C2 ahead of the system’s addition to NATO’s missile defense assets later this year.
max steel

Successful Launch of Aster 30 Missile from ITS Andrea DORIA


On Tuesday the 26th of October 2015, ITS Andrea DORIA successfully launched an Aster 30 missile during the First Maritime Missile Defence Exercise conducted in the Scottish Hebrides Firing Range.

The firing took place during the “At Sea Demonstration 2015 (ASD15)”, a NATO international exercise which is conducted and organised by the Maritime Theatre Missile Defence Forum (MTMD Forum). This year the activity included the launch of several targets that are simulating Tactical Ballistic Missiles and in this scenario the Andrea DORIA vessel was responsible for the protection of a US ship that was providing Missile Defence cover for the naval force.

The ASD15 placed a great emphasis on system interoperability, where various Navies launched different missiles against separate targets and all at the same time

The firings took place in very rough conditions (sea state 6) and with a strong North Atlantic wind. To date, regardless of the challenging conditions, the PAAMS system has performed as designed, showing the validity of the product against the specification.

“The contract was signed by the Direction Générale de l’Armement Dec. 23 2015 with the Eurosam consortium, which comprises MBDA and Thales,” the DGA said in a Wednesday statement.

"The contract is worth several hundred million euros," said a source close to the deal.

Britain, France and Italy also signed on Monday a memorandum of understanding for maintaining the capability and improving the systems on the Aster weapon, the spokesman said.

The program aims to develop a new version of the Aster 30 Block 1, with the first units to be delivered to the French Air Force in 2023, the DGA said. The work on the missile includes upgrading the sol-air moyen portée – terrestre, the land system, which attacks ballistic missiles.

MBDA builds the missile, while Thales supplies the Arabel radar.

The upgrade would improve the SAMP/T’s contribution to the NATO program for an anti-ballistic missile shield.

France expects Italy to sign a similar agreement in the next few months for the Italian SAMP/T units.

Britain fits a naval version of the missile on its Type 45 destroyer. France and Italy deploy a land-based Aster on the SAMP/T and the missile arms their multimission frigates.

A upgraded version is on the roadmap for building an Aster Block 2, which would intercept weapons that have a range of 3,000 kilometers.
max steel

The Aster Block 1 NT (New Technology) programme will cover the modernization of the Aster 30 interceptor and associated SAMP/T air defense system that will evolve with missile defense capabilities.
max steel

France, Italy To Cooperate in Development of Aster Missile

France and Italy have signed a cooperation agreement on development of the MBDA Aster Block 1 New Technology missile, the French Defence Ministry said in a statement.

The program aims to extend the Aster 30’s range to hit incoming ballistic missiles, one of Europe’s contributions to NATO’s program for an anti-ballistic missile shield.

“This decision reflects a shared determination to maintain the capabilities of the ground-based air defense system to the highest requirements and its Aster missile to respond to a full range of airborne threats,” the ministry said.

The memorandum of understanding for cooperation boosts industrial cooperation between MBDA and Thales — partners in the Eurosam joint venture, which builds the missile system — and also strengthens export prospects, the ministry said.

Poland and Turkey are among the export prospects for the Aster missile.

The two companies said in separate statements they welcomed the announcement.

“The two countries, which have carried out this program for many years, have just laid out a robust route map that will see the Aster program well into the next decade, which will help to sustain industrial know-how for many years to come, and which is key to ensuring French and Italian sovereignty,” said Antoine Bouvier, MBDA chief executive.

“Thales will deliver, in cooperation with the Italian industry, a new version of the fire control function and will develop a new missile seeker,” according to the French electronics company.

The upgrade work involves an “evolution” in the missile’s electronics and adaptation of the ground-based system for the new missile, which will be delivered in 2023, MBDA said.

Britain said at the Anglo-French summit in March at Amiens, northern France, that London would consider arming its destroyers with the new Aster version.

Italy’s defense procurement spending in 2016 set aside €15 million (US $17 million) for upgrading the Aster 30 weapon with France, with Rome’s eventual contribution set at €237.4 million.

An upgraded version is on the road map for building an Aster Block 2, which would intercept weapons that have a range of 3,000 kilometers.

The Block 1 model held by the French and Italian forces can intercept incoming missiles with a range of 600 kilometers, such as the Scud B.

An upgraded version is on the road map for building an Aster Block 2, which would intercept weapons that have a range of 3,000

Just to be clear the ranges given are the ranges of the targets, not the SAMs.

ie the Block 1 model can intercept targets that have a range of 600km... something even the oldest models of the S-300 system can do... in fact even the BUK could probably manage it. 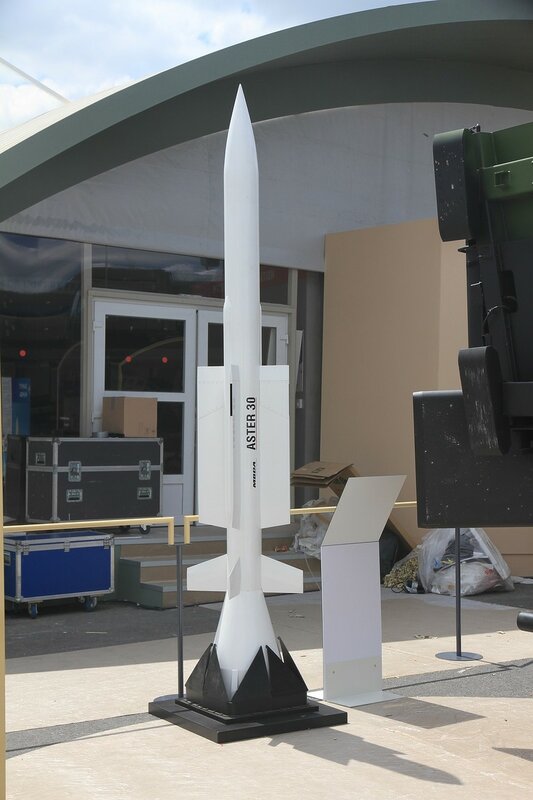 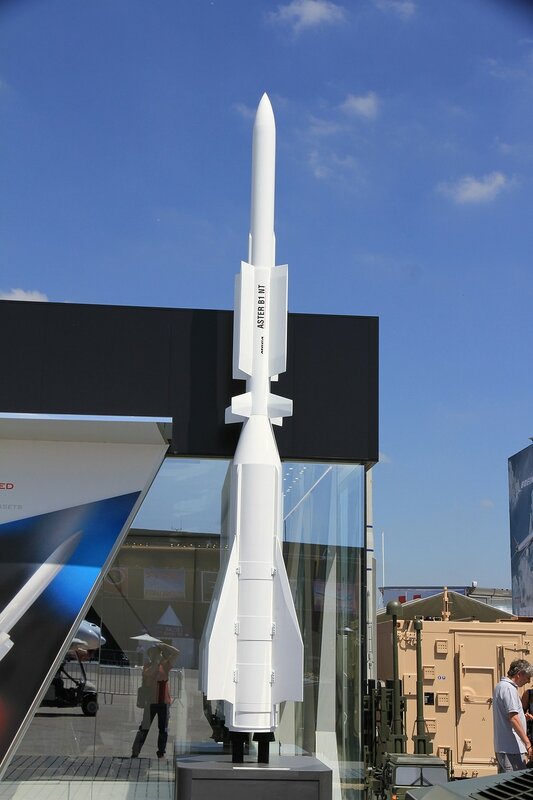 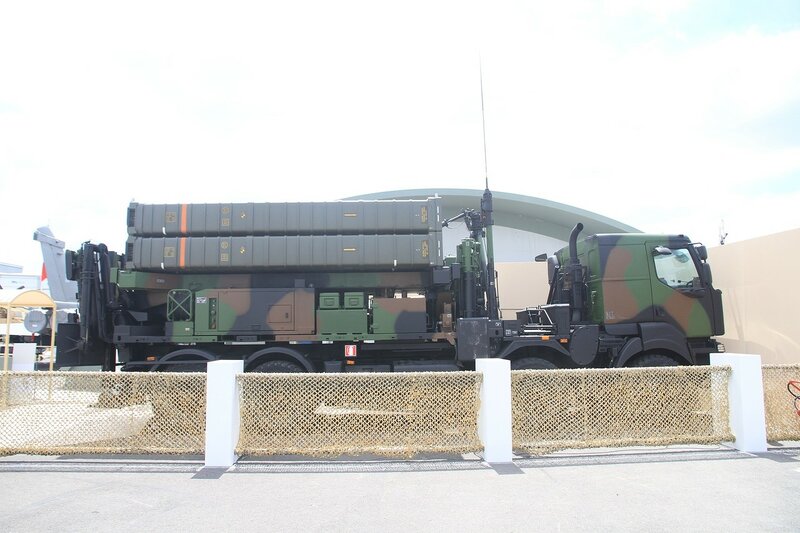 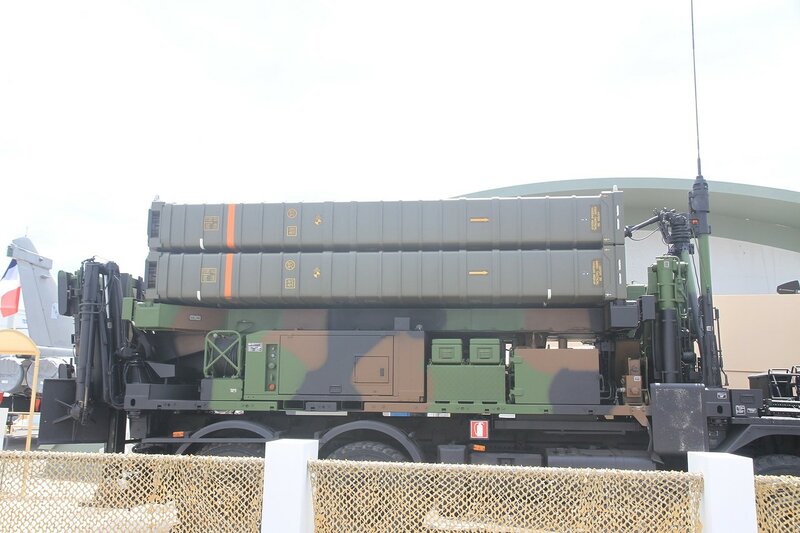 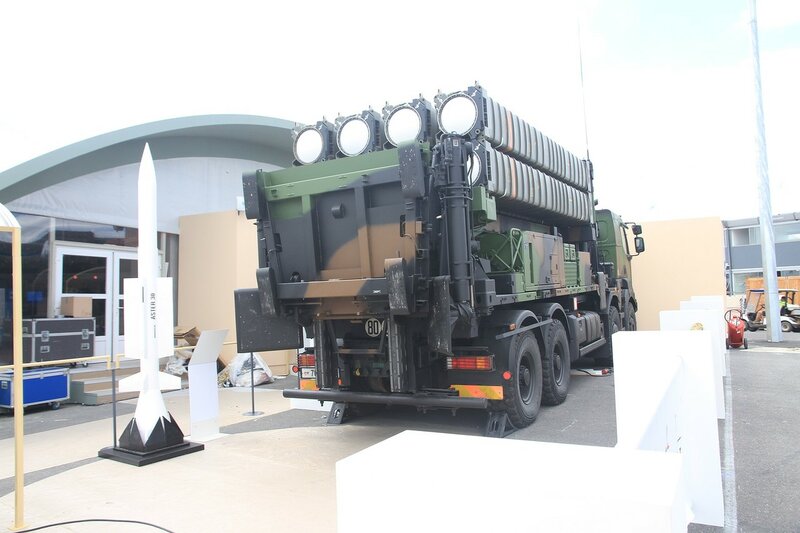 French/Italian consortium Eurosam has signed a cooperation agreement with ASELSAN and ROKETSAN on long range air and missile defence system. The agreement was signed during President Recep Tayyip Erdogan’s official visit to France, French President Emmanuel Macron. Cooperation agreement will last 18 months. According to agreement, missile programme will be ready in mid 2020s. System will be effective against stealth air platforms, UAVs, and missiles. 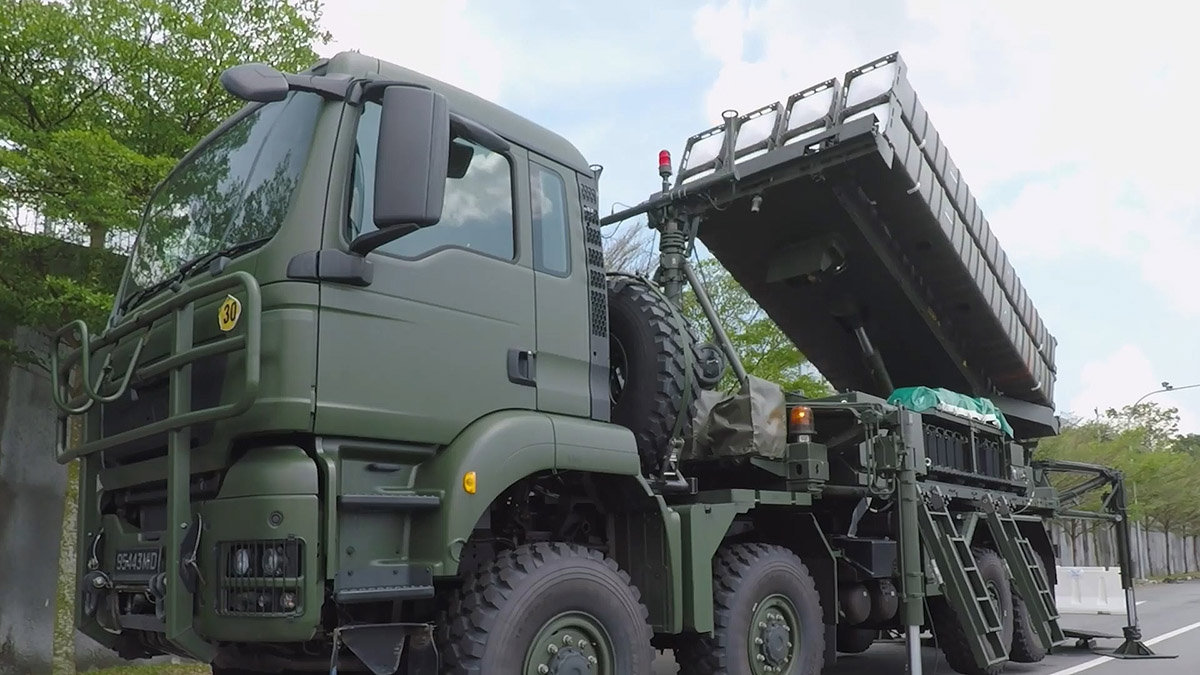 Considering the total embarrassment of the PAC3 performance in Saudi Arabia you would think all the Arabs would want SAMP/T.
GarryB

The problem being is that if they go european for SAMs, will they still have the US looking the other way when they do bad things?

Russian could sell their s-300VM pretty easily to arab countries. It will destroy all of those iranian made ballistic missiles which are not really impressive.

Europeans don't hide the fact tha SAMP-T is not capable against ballistic missiles and is useless against houtis or Iran who doesn't have any decent airforce. US lied about patriot capabilities and it costed a lot to arabia.

S-300VM is what they need and in the future if they want something against fighters they can buy s-350 and have a very good IADS. SAMP-T can't be used with s-300vm or saoudi s-400.
Vladimir79

GarryB wrote:The problem being is that if they go european for SAMs, will they still have the US looking the other way when they do bad things?

That is certainly a problem if they buy something from Germany, France and Italy don't usually have a problem looking the other way for Arabs. The US doesn't seem to care what Arabs buy, as long as there are lots of zeros on the order. I think it is some retribution for them arming Qatar for WWIII.
Sponsored content