I've only seen 3 examples of Russian rations and none of them look a bit as appetizing as our MREs.

The first one is a review from a guy who has apparently bought some Russian rations.

"I would not eat the ration again, the taste and quality are not good.

The two main meals are full of fat and oil - not enough spices and too much salt - but a lot of beef. I had to heat it in the microwave. It's like food from the Middle Ages."


The second example was a simple picture from a set of photos from a long lost discussion forum regarding Russian Spetsnaz. It was basically a photo of his food, which was, if I remember: a tin ration plate similar to the ones we have here except it was more of a bowl and didn't have sections for different foods, in the bowl was something that resembled apple sauce, and on top of that was some fish (I can only remember seeing it's head). Nearby the fish and still in the bowl were 1 or 2 slices of bread. To drink, the guy had a ceramic cup with coffee or tea. Tbqh, only that drink sounds appetizing.


The last came from one of Vlad's videos on Youtube, https://www.youtube.com/user/russiadefence#p/u/29/1qi_sxy_3z4 , at 3:20, the guy enters the Cafeteria, the food seems nicer there (although I've noticed that many things in Russia looks uncrappy when a HD camera is used).


So, for the most part, from what little experience I've seen of Russian rations, they look pretty bad, however, I'm open for change, anyone want to make a long post describing Russian rations?
Admin

The basic format for the Russian IRP is a bunch of different kinds of canned beef. It comes with a can opener and portable heater. You get a bunch of crackers that we usually use the meat as a spread. The canned sausage is probably my favourite. The fruit punch mix is good. Tea is some cheap Chinese crap. Usually comes with a couple pieces of candy. The worst is when they try to can rice, it because nothing but fatty mush.


The last came from one of Vlad's videos on Youtube, https://www.youtube.com/user/russiadefence#p/u/29/1qi_sxy_3z4 , at 3:20, the guy enters the Cafeteria, the food seems nicer there (although I've noticed that many things in Russia looks uncrappy when a HD camera is used).

I have eaten in that mess hall. That was before caterers. The food was like that served in a cafeteria.
IronsightSniper

How many varieties of food are available? The site in the OP (MREInfo) only shows one apparent variety for the IRP as shown in this picture: 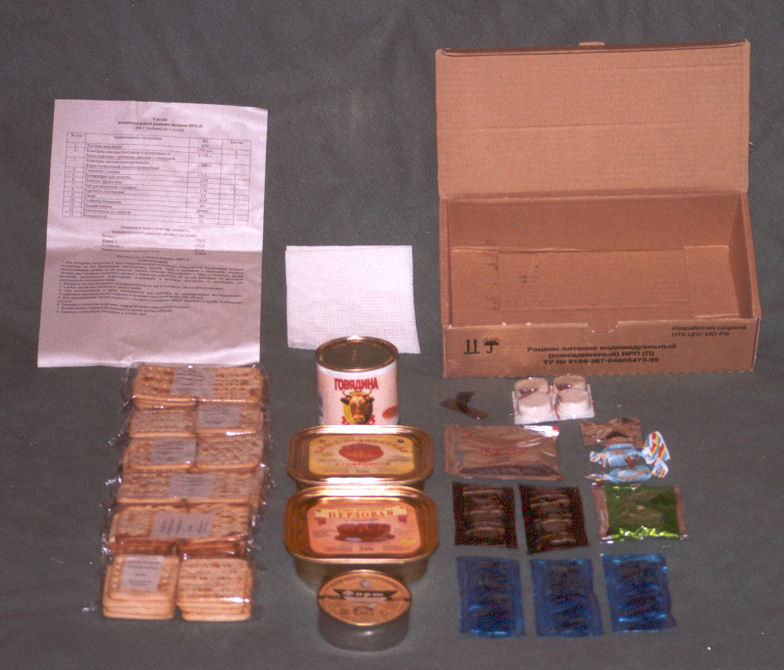 And the menu (translated): 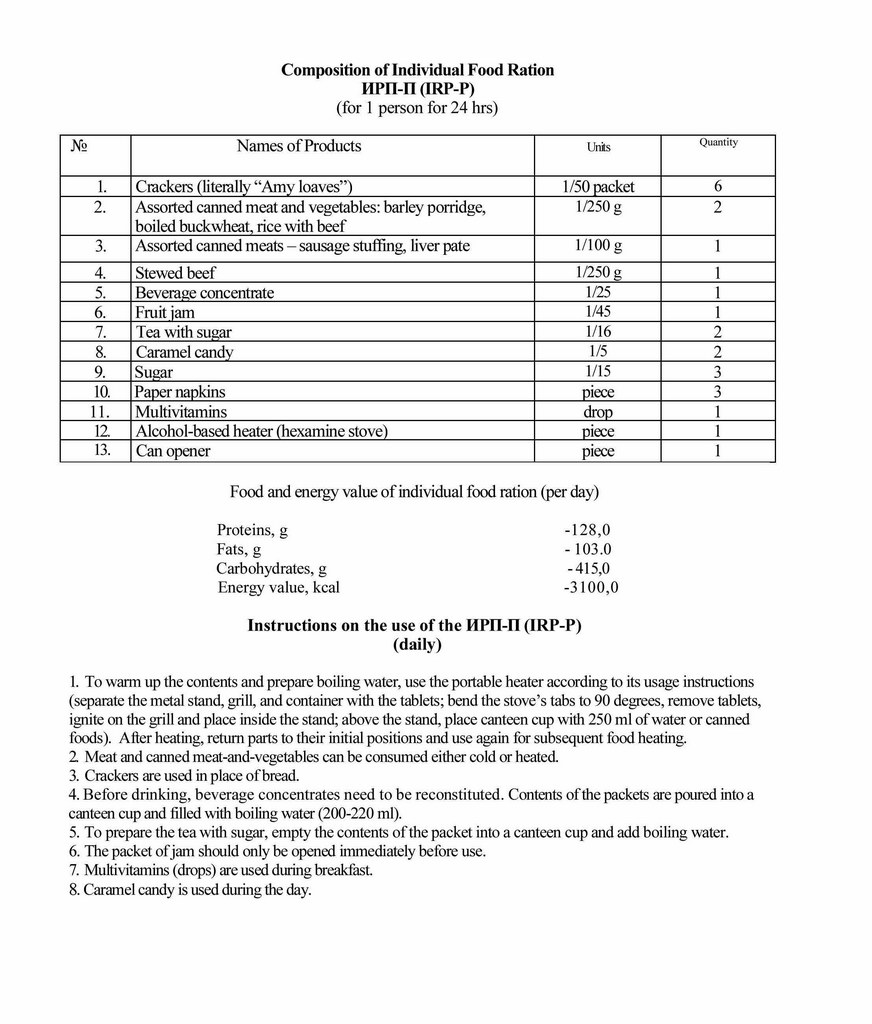 IronsightSniper wrote:How many varieties of food are available? The site in the OP (MREInfo) only shows one apparent variety for the IRP as shown in this picture:

There is only 1 menu for the IRP, and one menu for the IRP-B which is the combat ration. It is an emergency ration meant to replenish calories when prepared food is not available. If you eat it for more than a few days you will get sick.
Hoof

I think its the case with all the MREs... they make you sick after a while... I was eating MREs for about a week, after I ate 2 of them in one day, it took me 3 days to "go"... and another time I ate just one vegitarian MRE and it made me sick... i think it was called Penni Pasta or something... I don't think i gonna eat another MRE unless i absolutely have to... even if I have to wait for 12 hours to get something else...

I remember lots of complaints when MREs first came out.

One particular nickname says it all...

The New Zealand Army has spent quite a bit developing Rations for the troops...

and they come from this company:

Seems pretty good... there was a youtube video about new Russian MREs... Seems a lot different from the one Ironsightsniper showed, here is a link, sorry if i didnt post it right...

To embed video from youtube you just click on the link in the top line when you are typing your post that looks like filmstrip and paste in the direct link to the video you want to embed and click on OK.

Very easy... and thanks for the link BTW.

Except I change the [] brackets with {} brackets so you can see the code layout.

EDIT: Well this is embarassing... it doesn't seem to be working. Vlad? Anyone? What am I doing wrong?
IronsightSniper

One particular nickname says it all...

The New Zealand Army has spent quite a bit developing Rations for the troops...

and they come from this company:

Youtube video of unpacking and tasting new Russian army 24h field ration. If someone has other versions on video, pics or at least their content share.
par far

What kind of food do Russian Army soldiers get? And does anyone know if the Russian Army uses supplements?
Benya

This is the Individual Ration Pack (IRP) for Russian soldiers

The Ministry of Defense has developed special army rations for the Airborne Forces, marines and special forces
Today, 12: 49 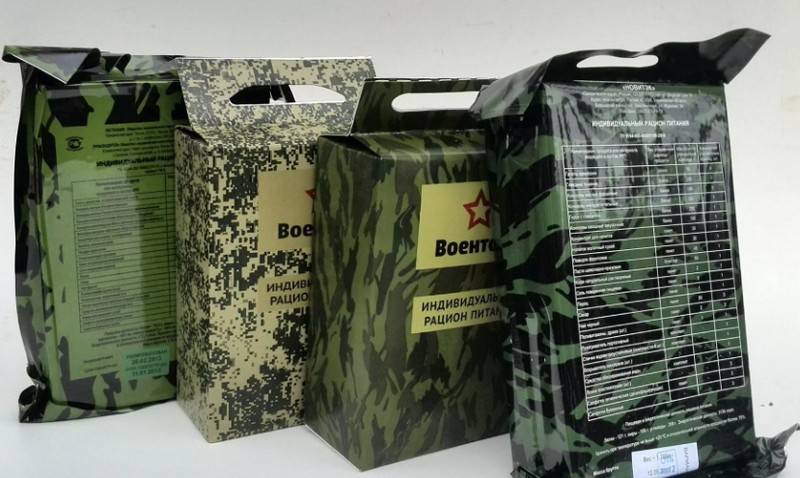 The Department of Defense has developed special army rations for the Airborne Forces, Special Forces and the Marine Corps, deliveries begin this year. This was announced by Colonel Sergei Nikhelman, head of the (food) department of resource support of the Ministry of Defense, in an interview with the newspaper Nezavisimoye Voennoye Obozreniye.

Answering the relevant question, Nikhelman explained that the new special army ration, developed in accordance with the requirements of the Airborne Forces, Marine Corps and Special Forces, became twice as compact, while improving in terms of nutritional value.

We have a large number of foods that contain carbohydrates. This ensures fast saturation and recovery of energy, which is very important in conditions of intense combat.

Also, the Ministry of Defense is developing special rations for military personnel in hot climatic conditions, including Syria. In such diets, the main emphasis is placed on compensating for the rapid loss of moisture and saturating the body with vitamins and mineral salts, which is necessary for the Russian military in these conditions.

It is noted that, unlike NATO rations, Russian army rations contain fewer chemicals and preservatives, so the shelf life of domestic food rations is only two years, as opposed to five years for Western rations.

Our ration is stored for a maximum of two years. At the same time, it is constantly consumed as military units conduct combat training activities, so that there is always a fresh supply in warehouses

He stressed that rations are currently being developed not for a specific type or kind of the Armed Forces, but based on the climatic conditions where certain units of the Russian army operate. Therefore, servicemen of the same type of troops located in the Arctic or Syria will receive completely different army rations, designed to be used in these conditions.

There is a large market in the west for compact healthy food for camping or hiking or fishing or shooting trips, I wonder if they thought of putting together some other meals that you could take on holiday... they already have a captive market for their food for contracts to feed the troops, but it would be a useful exercise for them to also produce food for recreational hunters and campers... certainly for Russian hunters and campers they could evolve and develop their meals to suit local tastes which should make them more popular.

Just commercial sales will tell them what people like or don't like... they could give away free samples for people to try and give feedback on to determine what people in different countries might be interested in.

Such packs usually include cooking consumables and can be dropped in places where there has been a catastrophe or emergency...

There was recently an incident where a road in Siberia was changed to a much shorter route and so the longer route was no longer used and a car was found that had broken down and the driver had frozen to death because there was no other traffic on that road... it had all gone the new shorter road...

Having a few drones around the place monitoring cars and looking for signals for help that could drop food and fire starting materials and perhaps first aid gear and communications equipment would be a useful thing too.... and in arid areas like the Sahara a large container filled with water would obviously be a good thing too.

Out of force of habit , you may hear some complaints about these rations not having angled contours , and smooth flush surfaces , and overall , being 20 years behind the west.