The failure of the project "Ivy"
One of the most secret CIA intelligence projects of the early 1970s was the use of submarines to penetrate Soviet territorial waters, almost invading the layout of our naval bases.

Cocoon" for underwater espionage
The CIA considered the top secret project “Ivy” (“IVY BELLS”) to be the culmination of its intelligence explorations of the 1970s — picking up information from our underwater cable lines. The Americans proceeded from the fact that we, believing in the invulnerability of submarine cables, will either use simple ciphers or negotiate in clear text. To intercept the talks they used submarines. The downside was that they were forced for a long time to stand still above the cable. This, of course, threatened to decipher the operation. It was necessary to replace the submarines with a stationary device capable of working in autonomous mode and “merging” the accumulated information coming into the “turnout” submarine. As a result, such a device on the instructions of the CIA was created by NSA experts.

The device, called the "Cocoon", embodied the latest achievements of radio-electronic technologies and was able to "remove" information from the cable without opening its outer shells.

"Cocoon" was a cigar-shaped container, in the tail part of which there was a miniature nuclear reactor, which served as a power source for the onboard radio-electronic system. MOSCOW, November 22. /TASS/. First Deputy Head of the Russian General Staff’s Main Intelligence Department (GRU) Vice-Admiral Igor Kostyukov has been appointed as the GRU’s acting head and he is also the most probable candidate for this post, a source in the Defense Ministry told TASS on Thursday.

The GRU’s previous chief, Igor Korobov, died on November 21, 2018 at the age of 62 after a long and grave illness.

Kostyukov is also the main candidate for the post of GRU boss, the source said. ‘If he is appointed, he will be the first naval officer in the GRU’s history to take the helm of military intelligence."

TASS has no official confirmation on this information yet.

According to open sources, Kostyukov was born on February 21, 1961. He first earned a degree at a naval educational institution and then graduated from the Military Diplomatic Academy, after which he came to serve in the Main Intelligence Department.

As one of the heads of Russian military intelligence, he directly took part in exercising control over the military operation in Syria. The vice-admiral was awarded the title of Hero of Russia for his courage and heroism displayed when performing his military duties. In late December 2016, he was placed on Washington’s sanctions list for alleged actions to ‘undermine democracy’ in the United States and in September 2018, he was again blacklisted by the US for allegedly interfering in the 2016 US presidential elections.

How can you undermine something that doesn´t exist?

Isn't is strange how just days after , the Russian general of intelligence dies  and American
top General of the 5th fleet dies in Bahrain base of "suicide" after having such big future and a family ??

Will not be surprised there if there is a small undercover war , between US and Russia and they killing each other
their generals.. and after Russia made Public in sputnik , the drones that attacked Russian base ,were Americans
drones.. that US was behind the attack.. in that same week , US army lose an hellicopter near the border of Syria
with 7 marines inside..

and on a different subject.. just days after MACRON announce an European Army to counter US..
A major ryellow evolution well organized shows in France.. for fuel prices.. even though in other
parts of Europe the prices is worse but no protest there..

Even the Russian media is exposing it.. the yellow protest in france are pay back to Macron
for his European only army proposition.. Hopefully Putin will not sit on his hands as he always does ,
,not wait for france to be overthrow their government and help France to counter this US financed revolution..

Vann7 wrote:............
Even the Russian media is exposing it.. the yellow protest in france are pay back to Macron
for his European only army proposition.. Hopefully Putin will not sit on his hands as he always does ,
,not wait for france to be overthrow their government and help France to counter this US financed revolution....

Why the hell should anyone in Russia give a crap about what French owners are doing with their property?

This mess works to Russia's advantage so they should just bake and hand out some cookies and enjoy the show.
medo

Actually, this is good for Russia. If those protest in France prolonged and they will and if protesters blocked all gas stationsand disabled communications, than french economy will go bankrupt. With the fall of France whole EU will fall and go bankruot and after that US will go bankruot as well as US economy is very dependent on EU market. When EU and US go bankrupt, their military might will also fall down and this disaster will be far harder that the fall of Russian army in the nineties after the break up of Soviet Union.
GarryB

The main opposition to Micron was Le Pen, so why lift a finger to help the little man?

He was happy to blame Russia for all the bad things in the world... screw him.... he is pretty much a US stooge anyway.

He has every reason to say it that way... look at how Trump turned on his so called EU allies when they didn't fall into line over Iran...

The US is an ally of convenience... and there is no secret that it is only Americas convenience that is satisfied...
George1

Vice-Admiral Igor Kostyukov, acting GRU chief, has been appointed as the head of the main intelligence directorate (GRU) of Russia’s General Staf

Military counterintelligence officers unmasked dozens of intelligence agents among them from the US, the UK, Germany and Spain

"Russia’s Armed Forces still are a matter of interest for foreign intelligence agencies," he noted. "This is proven by the fact that military counterintelligence officers exposed dozens of intelligence agents from the US, Great Britain, Germany, Spain, Sweden, Lithuania, Latvia, Estonia, Georgia and Poland [in the past five years - TASS]," Yuryev added.

The general stressed that the FSB Military Counterintelligence Department and army security agencies were particularly tasked with preventing foreign intelligence agencies from reaching out to the Russian Armed Forces, collecting intelligence concerning security threats, preventing terrorist and subversive activities against the army, as well as with protecting state secrets, countering organized crime, corruption, arms and drug trafficking in the army.

FSB's Military CI Department under Gen-Col Nikolay Yuryev celebrates 100th anniversary on Dec. 19. It existed under the Tsar but the Bolsheviks created a "unified system" of CI when the "special sections" of the VChK were created in the army and navy.

"Threat from Russia paled in comparison to China" - BBC News

Yeah... which clearly spells out that what he means is economic threat.

China is a serious economic threat to US dominance of the worlds organisations.

In terms of a military threat China is a regional power, but not a threat to the entire western civilisation like Russia could be if provoked.

Looks like Russian FSB won the lottery with the arrest of  Paul Whelan .. 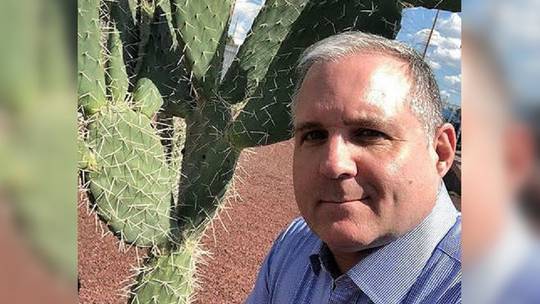 and those governments are seeking communication with him..

he was since 2007 traveling to Russia and was caught with hands in the cookie jar ,
spying the kremlin ..

Now Russia can use this man ,to demand the release of not only butina
which is not a spy .. and the kidnapped  Huawei top executive in Canada.
or Russia can hold him for years.to try  to get cooperation from him ,and that he
expose other spies.. to totally dismantle UK and US  spying operations rings in Russia.

if i was putin ,i will seriously avoid any government visit to US or UK or Canada,.
there was an invitation of NASA to Rogozin to visit US and talk to students.. which could be a trap..
to kidnap him .. . now they could arrest him and later change him for this thug Russia captured.
So hopefully Russia government will avoid sending their officers ,in times US and CAnda and UK seeking
to kidnap Russia and chinese citizens.
GarryB

Sad they let the Americans see him... the treatment of Russians in the US has been appalling...

Would not let the British see him until they let Russia see the Skripals...

And I certainly would not trade him for Maria as she is not a spy.
GarryB

there was an invitation of NASA to Rogozin to visit US and talk to students.. which could be a trap..

NASA rescinds invitation to Russian space chief amid pressure from US lawmakers is the title, but the article ends with:

Roscosmos, meanwhile, said that it had not been notified by NASA about the postponement of Rogozin's visit.

But so there was so called protests in Russia on anniversary of Nemtsovs death. They try to claim 10,000 people arrived in Moscow but of course that is greatly exaggerated. Most people were flying Ukrainian flags (go figure) and carrying pictures of terrorist sentsov.

I really hope the authorities arrest and charge people carrying sentsov photo as that is against Russian law to promote those who are terrorists. Russia does a really. Really. Really bad job at enforcing their own laws.
Nibiru

But so there was so called protests in Russia on anniversary of Nemtsovs death. They try to claim 10,000 people arrived in Moscow but of course that is greatly exaggerated.  Most people were flying Ukrainian flags (go figure) and carrying pictures of terrorist sentsov.

I really hope the authorities arrest and charge people carrying sentsov photo as that is against Russian law to promote those who are terrorists.  Russia does a really. Really. Really bad job at enforcing their own laws.

Foreign NGOs and 5th columnists are still given a free hand in Russia to do all sorts of demagoguery againts the government and state interests. Putin or whoever is in charge of Russia needs to do more to squash these foreign prostitutes. I just hope that someone is listening. Ignoring these saboteurs is a grave mistake!
PapaDragon

Pro-tip: unless you see footage or photos from above, remove last digit from every reported number of protestors

Not just in Russia but everywhere
miketheterrible

PapaDragon wrote:
Pro-tip: unless you see footage or photos from above, remove last digit from every reported number of protestors

Not just in Russia but everywhere

That's the thing. Russian authorities counted roughly 6K people. "Independent" foreign NGO's state 10,000. Either way, no bird's eye view yet. In every case it was always a sad showing

Also, it was funny cause only one guy actually made it to Nemtsovs grave. Non of his wives, girlfriends or iligitimate children made it.

As well, someone was interviewing people and asked them why they protest. Average answer from the hampsters was "Putin's people make millions!" Then when they were asked then why Nemtsov had over $1M USD in his account after he does, they just screeched.
Austin

Sergei Mikhailov was sentenced to 22 years in a penal colony, and Ruslan Stoyanov to 14 years Good. They need to arrest plenty for it to finally kick in other operatives heads to be in interest of country
Sponsored content