The Russian Defense Ministry has approved the technical design of the new light military transport aircraft Il-112V, reported on Thursday in the press service of the Ilyushin Aviation Complex (JSC "IL").

The new military transport aircraft Il-112B will not be exported
Book.

I think perfect plane do recon/asw

The article just states that some of the components on the Il-112V are secret and wont be exported.


Savelyev added that in the future, "Ilyushin" create "light version" IL-112, which will not be set to a prohibited export equipment.

Basically says they will develop a version with non secret parts that can be exported.


That might mean the domestic Il-112v has secret navigation equipment or other special items like jammers or EW equipment... it might even have a laser or other weapon type... who knows, but it is something they don't want to export... yet.
George1


Light military transport aircraft Il-112V is equipped with a chassis with the original scheme of cleaning with swinging in the process damper on the main pillars.

MOSCOW, July 29 - RIA Novosti. The first set of landing gear for the Il-112V will arrive for testing in the first quarter of 2016, a contract was signed to develop them, he told RIA Novosti the developer holding units "technodynamics" (included in Rostec).

"Holding" technodynamics "and JSC" Ilyushin Aviation Complex "signed a contract for the development of the chassis and the hydraulic cylinders for the future of light military transport aircraft Il-112B. The first set of products will be transferred to the static and fatigue tests in the first quarter of 2016," - he said, source said, explaining that the production of the chassis will be conducted in Samara "Aviaagregat."

According to the contract, "technodynamics" must conduct development work on the development of the main and nose landing gear and hydraulic cylinders for the aircraft. To date, the chassis for the new aircraft has been designed and can begin to produce samples. Project units made entirely in the digital layout with 3D-modeling systems.

"The chassis has an original circuit cleaning with swinging in the process damper on the main supports, and is widely used in the construction of high-strength titanium and aluminum alloys, which made it possible to achieve high weight efficiency," - said the representative of holding.

Light military transport aircraft Il-112V is designed for transportation and air landing light weapons and military equipment, goods and personnel, as well as for the transport of a wide range of different loads at the commercial operation of the aircraft.

Earlier it was reported that the contract for the Il-112V with the Defense Ministry was signed in December 2014. As reported by the deputy head of the military department, Yuri Borisov, the IL-112 should make its first flight in 2017, and since 2019, after the completion of all state tests Voronezh aircraft factory should start its serial production.

Interesting, I would also guess they will go for all-electric slats if they are doing this for flaps...
And I'd expect this experience on 112V to also be leveraged on the RU-CHI widebody JV,
as well as the future Superjet stretch (and non-stretch Superjet "NEO"/etc).

The chassis for the Il-112V 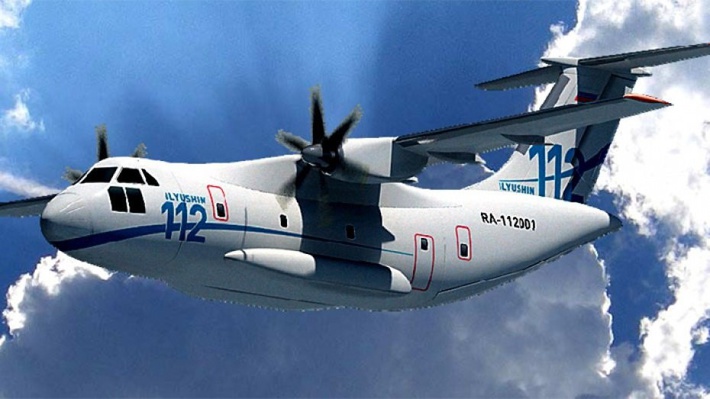 Source is indirect from tehnoomsk.ru

The IL-112V has to make its first flight in 2017 and 2019 after the completion of state tests Voronezh aircraft factory should start its serial production.

MOSCOW, November 25 - RIA Novosti. United Engine Corporation (UEC is included in the Civil Rostec) announced a tender for development activities (R & D) to create turboprop TV7-117ST for the newest light military transport aircraft Il-112V, for these purposes planned to spend 4.9 billion rubles, it follows from the applications available on the portal of public procurement on Wednesday.

The application is available in the form of purchases from a single supplier.

Turboprop engine TV7-117ST - a further development of the engine family TV7-117. Originally C, then there was a modification of CM and CT - more powerful, more efficient and modern modification. Earlier, Director General of "United Engine Building Corporation" Vladislav Masalov reported that the serial production of the engines is planned to reach by 2020.

As previously reported, IL-112V has to make its first flight in 2017 and 2019 after the completion of state tests Voronezh aircraft factory should start its serial production.

United Engine Corporation - integrated structure, which produces engines for military and civil aviation, space programs, installation of various capacities for the production of electricity and thermal energy, gas pumping and ship gas-turbine units. In February, the JDC reported that it had received the right to carry out foreign trade activities related to the maintenance of military products.
GunshipDemocracy

The Il-112V can get the latest navigation system, the BINS

The system BINS allows to determine the location of the object, complex processing and issuing of navigation and flight information offline and in the absence of land, sea or space of signals.

Production of components for the first Il-112B began in Ulyanovsk

MOSCOW, January 20. / TASS /. The first unit of light military transport aircraft Il-112B started building the plant "Aviastar-SP" in Ulyanovsk. It is reported by the press service of the plant.
"Currently under design and process study and pre-production. The plant has already started production of the first pieces," - said in a statement.
As explained in the press service, the two sets of units on the prototypes (summer and resource) to be delivered this year. At the same time to create the Il-112V will use parts and accessories made in Russia.
Easy Il-112B carrying capacity of six tons designed to replace An-24 and An-26. Earlier it was reported that the military should get 62 new machines. The aircraft is designed for transportation and air landing light weapons and military equipment, goods and personnel. The aircraft is equipped with advanced digital avionics complex, "glass cockpit." In 2017 it is planned to transfer the first flight model of the Il-112V for the first phase of state joint tests.
"Aviastar-SP" is involved in cooperation for the construction of light military transport aircraft Il-112V. Under the project, the company will produce panels on the fuselage compartments, hatches and doors. Final assembly of the aircraft will be produced at the Voronezh aircraft factory.

All works on Il-112V new light a/lifter are going on time. Expects maiden flight in mid of 2017

IL-114 need to number plated, instead all the funds and support need to be put behind the IL-112V so that a military and a civilian variant is a reality at the earliest. The IL-112 (basically the high mount engine pods compared to the IL-114) will be a much more competitive product from the Russian stable to compete against the likes of against the likes of ATR, Embraer etc.

Now that the project is back in motion, they can also do a new and better PR video and print materials. The current promo video is not bad either, its among the best to have come from the Russian side.

Flutter tests are apparently completed. The model was on the scale of 1:5, wingspan of 5,3m and weighed 300kg. It was tested to a simulated speed of 650km/h. They have started testing of the new turboprop http://bmpd.livejournal.com/2129600.html 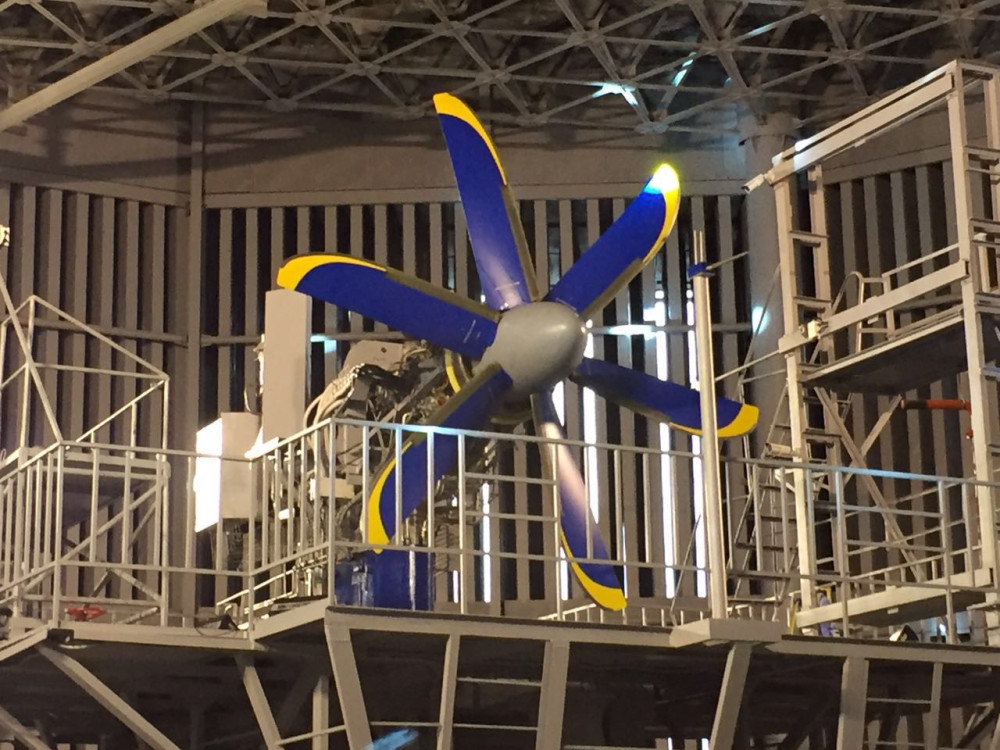 Engineers are developing a new modification of the new onboard defense systems (ODS) for the Ilyushin Il-112B military transport aircraft that will be able to counter all potential missile threats up to 2025, according to Russia's Concern Radio-Electronic Technologies (KRET).

Completed assembly of the fuselage of military transport aircraft Il-112V 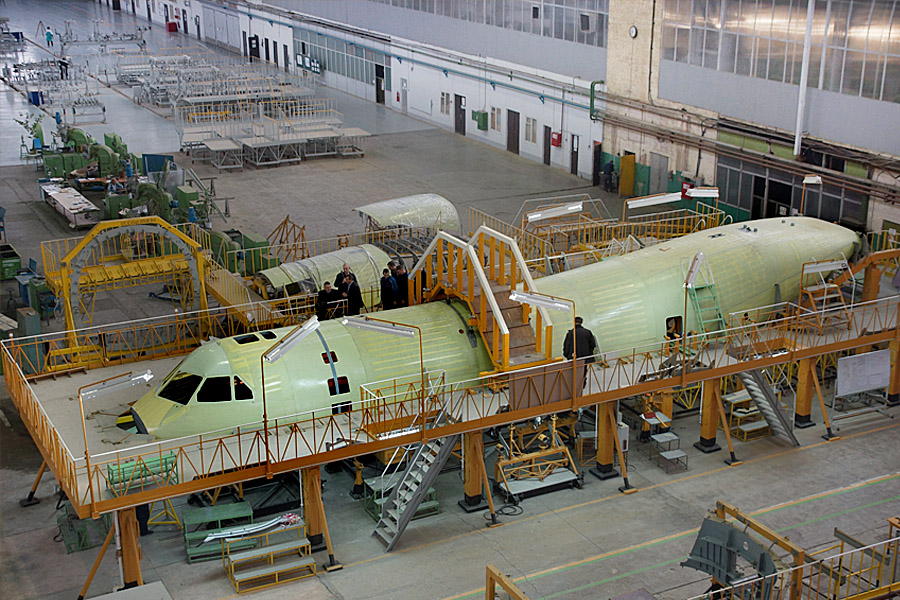 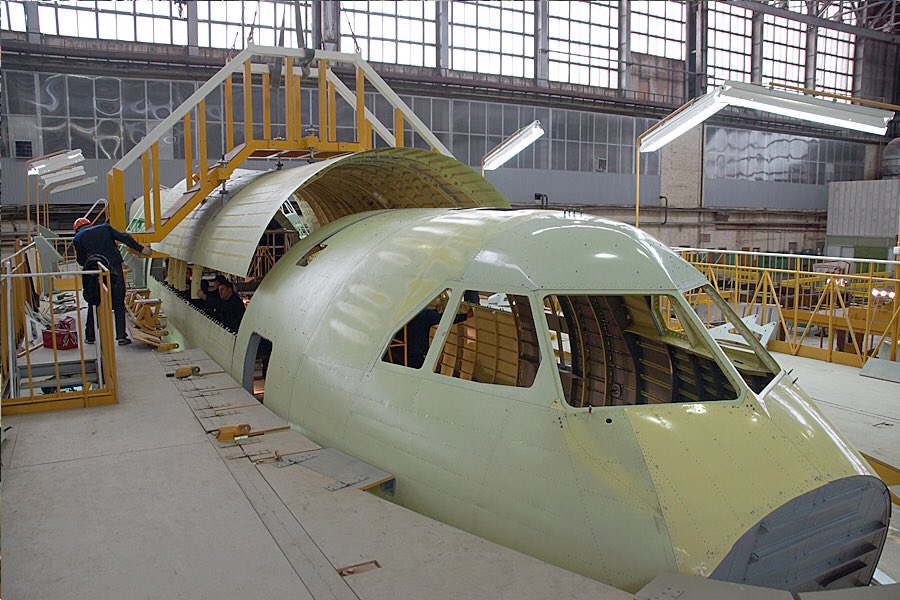 hoom wrote:They have started testing of the new turboprop http://bmpd.livejournal.com/2129600.html

This plane seems maybe just small enough to navalise for CV AEW use?

It is 9 meters tall.
wilhelm