Also third generation thermal imagers are much smaller and more compact because they don't need to be cooled down to cryogenic temperatures to operate properly.

Let us hope we will soon see more clear pictures of optics, specially of domestic ones.
GarryB

AFAIK FELIN includes a medical system that measures the health of the soldier, perhaps when their heart stops the system cuts them out?

In a vehicle... something similar with a kill switch.

Of course a sophisticated enemy doesn't need to kill or capture anyone as the amount of datalink broadcasts it should be easy to find threats...

I would think the value of having detailed info about your own area to support your decision making process warrant the risk, though I agree that information security would have priority.

It must be kept in mind that the information flows both ways so individual soldiers can point their rifles at targets and send the video image to HQ without firing to add to information about the enemy and their positions etc etc.
TheArmenian

medo wrote:Excellent picture of Belarus Tor-M2. I hope there will soon be pictures of Russian Tor-M2U that we could see if Russian Tors are wheeled or tracked ones.

Do they still have only old TV camera?

This video clip of the handover might contain the answer you are seeking.
Please share your finding(s) with us.

On the video Belarus Tor-M2 have the same TV camera as Tor-M1. Up to now we still didn't see any picture of domestic Tor-M2U. It is a little different, because it have more missiles in launcher than export Tor-M2 and maybe in its electronics too, so it could have different optical system.

AD crews from eastern military district are ending their course for Tor-M2U and at the end of August they will have live firings in Kapustin Yar.
TR1

Are we sure they actually received them, and it wasn't "Going to receive" type of news?

The news were, that in December 2011 they received them in Volgograd region. But until we see clear picture of army Tor-M2U, there is no certain confirmation. There will be a chance to picture them on firings.
TheArmenian

Below are photos of an OSA (SA-8 Gecko) short range SAM system of the Armenian Army during exercises.
In the second photo, one can see the optical tracking device which I believe is an addition/modernization of the system.
The last photo is interesting because it is quite rare to see a picture of the optical tracking screen on a Russian SAM. 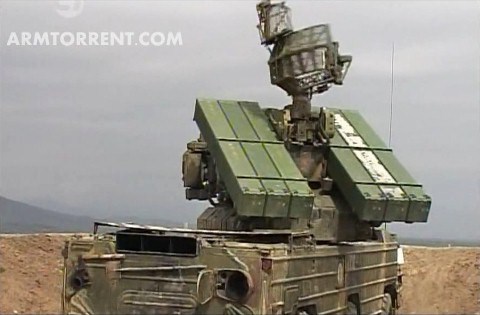 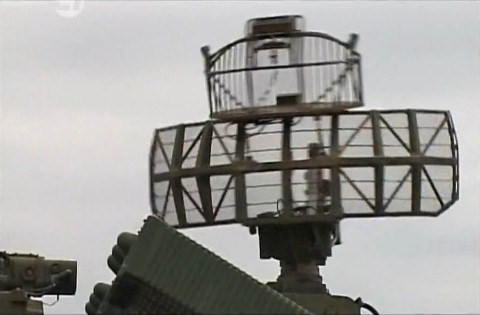 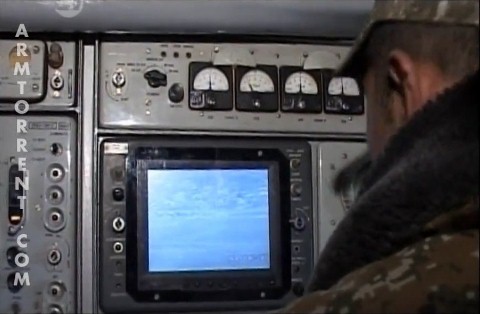 I think TV sight on Armenian OSA is standard one, like the one in the link.


There is also modernized version 9Sh38M, which also have II tube inside for night operations.

I always liked the Wasp.

It always seemed to me to be a neat little vehicle.

At one stage AGAT put out a small ARH seeker... like a mini R-77 seeker and they said it was for short range missiles... AAM and SAM and I thought that fitting a small compact ARH seeker to the SA-8 or SA-15 missiles would be interesting. Along with fitting them to R-73s for helos and light attack aircraft.

There are two radar, one is a search radar and the other radar is the tracking radar.

Shockingly enough the search radar searches for targets... it is a sophisticated and expensive 3D model, and the tracking radar has two functions... tracking the targets and outgoing missiles, the guidance commands are sent via datalink to the missile.

Using optics, I rather suspect it would use SACLOS guidance with the optical tracking of the missile and target with course corrections being transmitted via the data uplink. 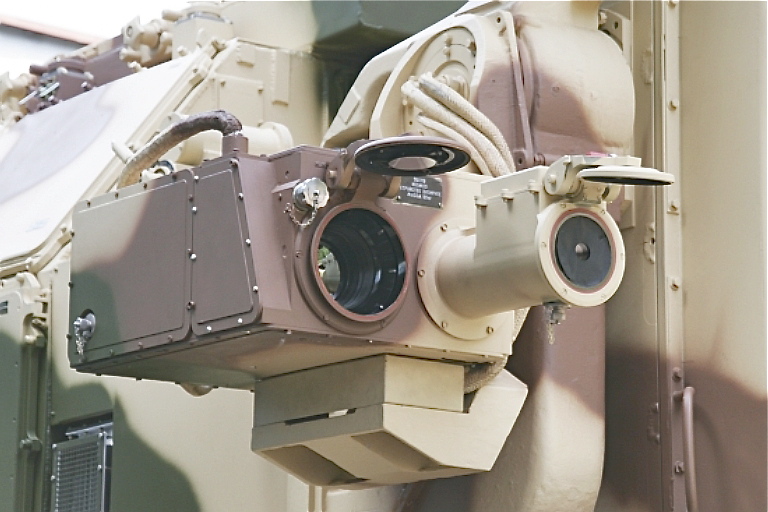 Very simply... the TOR missiles are not radar guided missiles.

The TOR system uses radar to find targets and to track the targets and the outgoing missiles and it calculates guidance commands and command guides its missiles via a datalink.

In other words the missiles are command guided, and the target and missile tracking can be by radar or by optics.

Note the Pantsir-S1 can direct 1 missile via optical guidance and 3 missiles via radar tracking at one time, so it can optically track one target and one missile and radar track 3 targets and 3 missiles at once...
TheArmenian

But you still have to detect the target first. This can of course be done by using the acquisition radar of the system or by information fed from the IADS or simply another radar. The target can also be detected by observers.

My next question is: can the Osa's optical system be used for scanning and detecting targets or is it strictly for tracking the targets whose coordinates have been provided by its own detection radar (or another source) ?
Viktor

TheArmenian wrote:
My next question is: can the Osa's optical system be used for scanning and detecting targets or is it strictly for tracking the targets whose coordinates have been provided by its own detection radar (or another source) ?

My next question is: can the Osa's optical system be used for scanning and detecting targets or is it strictly for tracking the targets whose coordinates have been provided by its own detection radar (or another source) ?

A radar unit does not generally operate alone, it should have feeds of info from the unit command and a central command.

In a unit of say 6 vehicles you wouldn't need 6 radars operating all the time... with the vehicles spread out... a few hundred metres apart, you could coordinate it so one vehicle will search for 30 seconds and then shut down... and pass the information it collected to the other vehicles and then another vehicle in the unit will scan for 30 seconds and then shut down. Any targets detected in this way can be allocated to individual vehicles to optically search for, or as Medo suggests the commander of a vehicle could stick his head out the hatch and use binoculars... or perhaps just listen for a few seconds.

Much of the time the unit will get advanced warning of targets entering their sector and the general direction of their approach and their altitude, which makes searching easier.

With a modern upgrade digital video systems with thermal imaging greatly improves optical performance and adds features like auto scan and auto track. Different zoom performances should allow large areas of the sky to be scanned.

Some systems like Phoenix use 360 degree IR scanning which should be able to be automated and fairly effective at detecting incoming threats without emissions.

Other options include the small box antennas often seen on the SA-13 SAM system that includes systems to detect the low power dopplar radars used by low flying aircraft and missiles used to avoid hitting the ground during low altitude flights at high speed in the dark or bad weather.
Such systems could also be used to detect the MMW radar emissions of long bow apaches.

Southern military district in Volgograd region receive first batch of Tor-M1-2U. They will replace Osa and old Tor. I wonder if this is actually Tor-M2U and is just journalist lapsus or they are M1 modernized to M2 level. Considering its search radar have 30 km range, could simultaneously engage 4 targets and reach 10 km altitude (15 km range), than this is most probably Tor-M2U.
Cyberspec

medo wrote:if this is actually Tor-M2U and is just journalist lapsus or they are M1 modernized to M2 level

According to the chat on Russian forums, the TOR-M1-2U is an upgrade that uses elements from the TOR-M2U. Apparently the developers of the TOR-M2U need to fix some faults that were detected during the trials. It's expected to enter service in 2013. Also, it's said to differ significantly from the export TOR-M2E

The first consignment of Tor-M1 MISSILE SYSTEM-2U "troops entered the southern military district. By the end of this year the AAMS will consist of air defense force unit in the Volgograd region, "said Kochetkov.

According to him, the new AAMS Tor-M1-2U "went into service in the framework of the State Defense order. The system will replace the standing armed with missile short-range "Osa", "Tor" and "Tor-M1".

Tor-M1 MISSILE SYSTEM-2U "is intended to attack aircraft, helicopters, unmanned aerial vehicle aerodynamic, guided missiles and other precision weapons, flying at medium, small and extremely low altitudes. The system is capable of hitting four targets simultaneously at a height of up to 10 kilometers. Its crew consists of three people.

"The complex applied on-board small aerial target detection station, which allows you to discover and manage up to several dozens of air targets in the zone more than 30 kilometers. In addition, electronic equipment new ANTI-MISSILE WEAPON lets you choose the level of risk, "suggesting" combat sequence of calculation of shelling, "said Kochetkov.
Tor-M1 MISSILE SYSTEM-2U "is capable of providing air defence units and facilities cover day and night, in all weather conditions, in addition, the system features high jamming immunity.

Russian army in Eastern military district received in 2012 new S-400, Pantsir and Tor units. It seems they have those Tor-M2U they talked about in summer.
Sponsored content