To what extent are you looking for in regards to ORBAT?

thanks friend! to Divisions / Brigades level

The Troops of the Interior Divisions are being changed to Brigades so there is not much difference in sizes or organizations, in fact some Brigades are larger then Divisions. Have read that this change over has been completed in all Regions except the Central. The Divisions and Brigades other then the mobile ON ones are really just Regional Command and Support organizations for the various regiments and battalions scattered throughout their Area of Responsibility.

112th ON brigade - Simferopol (commands ON, SN and SM units in Crimea)

NOTES;
- 46th brigade has 2 units of Chechen volunteers which apparently have been seconded to the Chechen MVD, which also have 5 units (regiment size) of VV type paramilitary forces
- 56th brigade was the 48th brigade and then the 98th regiment. Was rumored to be merged with both the 49th and 47th brigades. Not sure of present status. 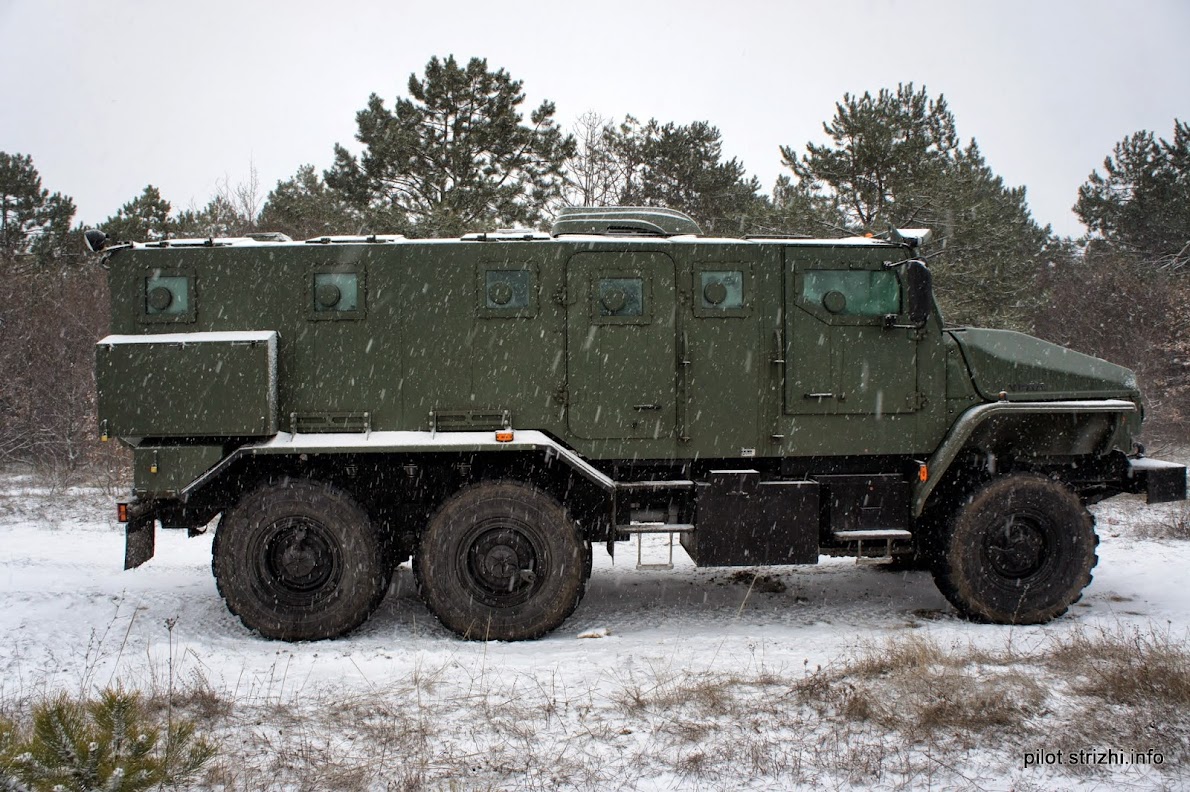 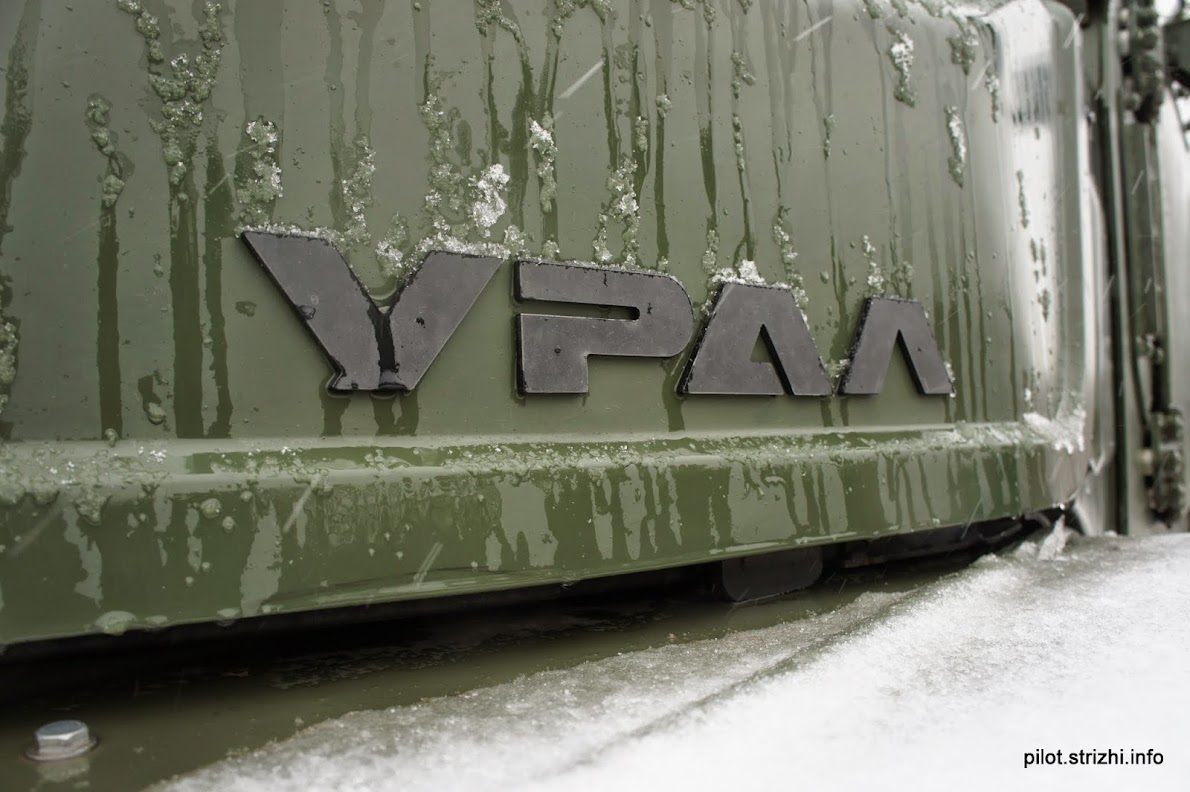 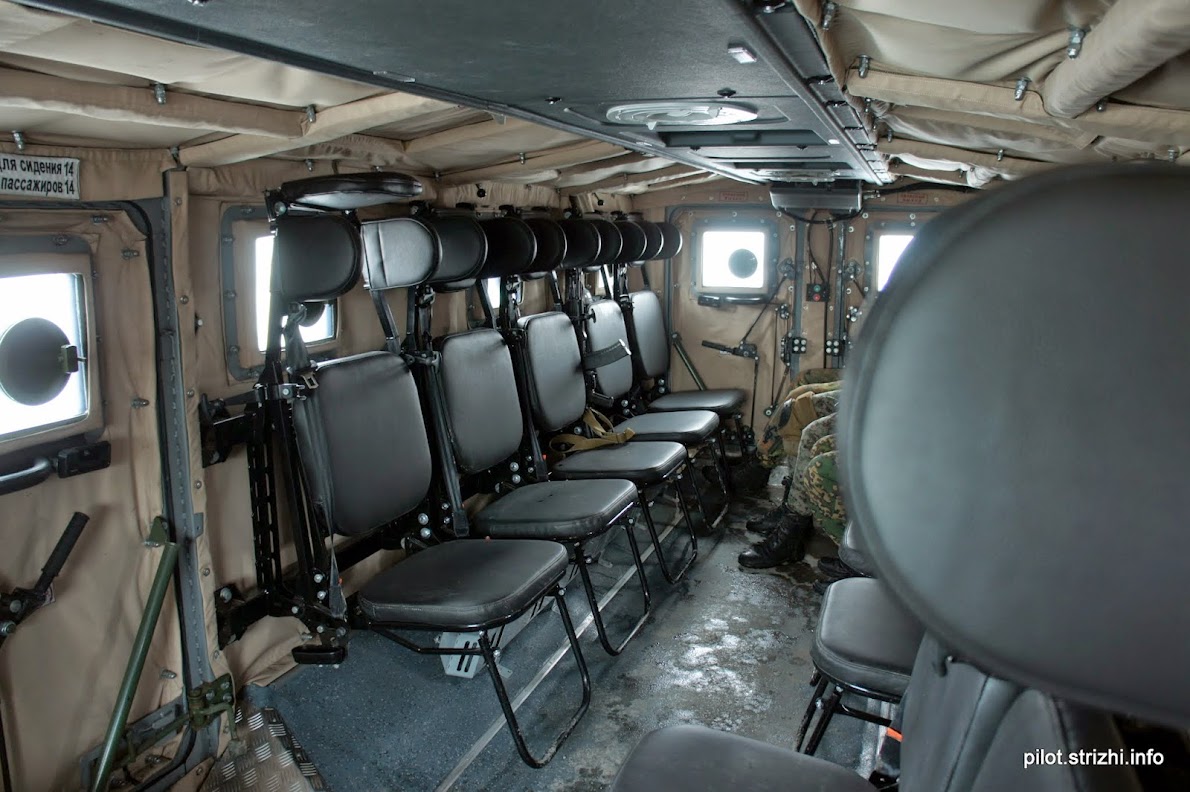 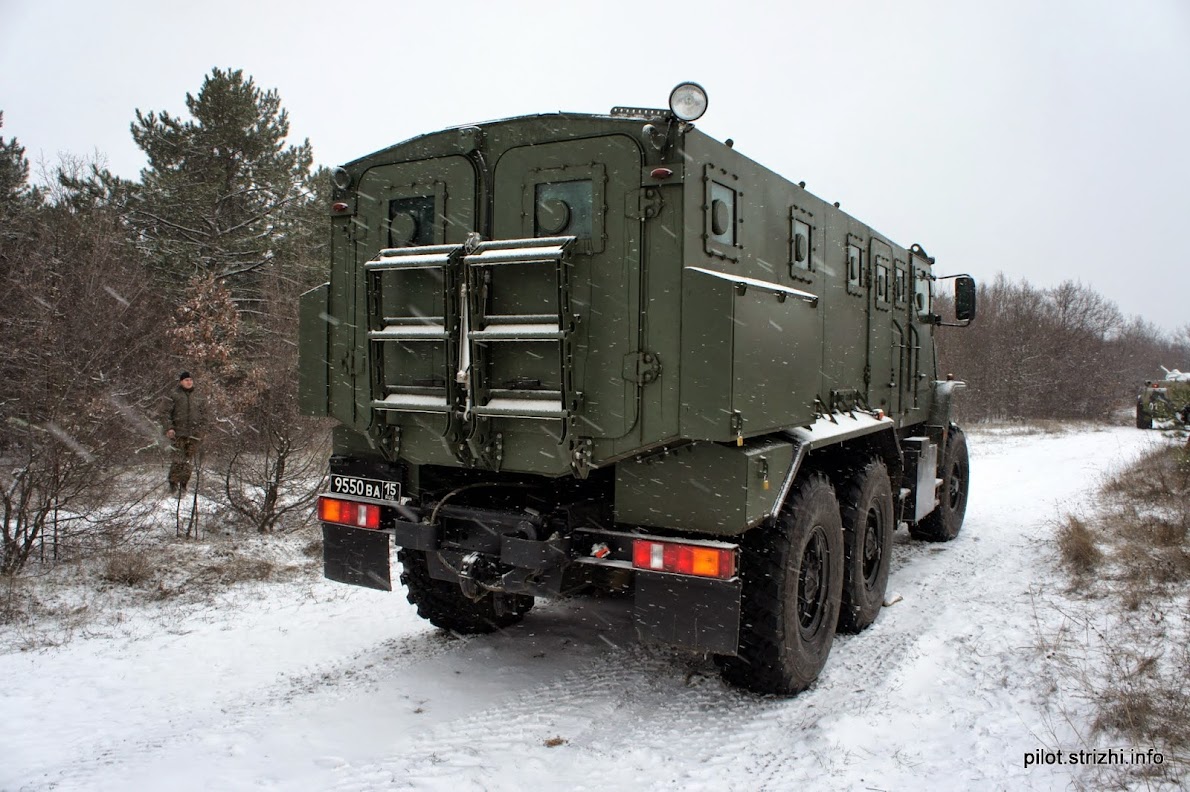 Is this a new MRAP Vechile?
TR1

Yes, a cheap one.

After completing tests, BULAT is approved by MVD

Hopefully we will se orders.
I think TR1 will be pleased as he has a soft spot for the modern day BTR-152

Ugh. I hate both that thing and the Vystrel it came from.

Oh well, the MVD was never exactly trend-setting when it came to their equipment.
Werewolf

TR1 wrote:Ugh. I hate both that thing and the Vystrel it came from.

Oh well, the MVD was never exactly trend-setting when it came to their equipment.

The Ansyr they have is sexy.
magnumcromagnon

I'm not going to lie, it looks like the 'station wagon' of lightly armored vehciles. BTW doesn't 'BULAT' sound similar to a Russian curse word?
Regular

Well it's better than Vystrel anyway.

So 4 SM, 1 SN and 1 ON sub-units. Seems to be slightly different unit make up then under Ukrainian but not by much. There are 6 units in both.

PS; like that pretty blond standing in the center

magnumcromagnon wrote:I'm not going to lie, it looks like the 'station wagon' of lightly armored vehciles. BTW doesn't 'BULAT' sound similar to a Russian curse word?

nothing to do with блять, blyat, basically, damn, fuck, etc...

The exercise is aimed at drilling the use of troops in case of aggravation of the situation in Russian regions to cope with new threats to the state’s internal security, spokesman for the troops says

He said that the exercise is conducted in the period from April 2 to 10 under the command of First Deputy Interior Minister — Commander of Interior Troops Colonel General Viktor Zolotov.

"The exercise is aimed at drilling the use of troops (forces) in case of aggravation of the situation in Russian regions to cope with new threats to the state’s internal security that is in line with the federal law on interior troops," he said.

According to the spokesman, the strategic exercise is underway in the North-Western, Central, Volga, North Caucasus, Southern and Crimean Federal Districts. The manoeuvres involve some 40,000 troops and about 1,500 military and special equipment units.

He said that the interior troops have a number of tasks under the law, including participation in joint operations with the police in ensuring public law and order, combating terrorism, guarding of important state facilities and special cargoes and participation in the Russian territorial defence.
franco

George1 wrote:Spetnaz MVD (called OSNAZ by the MVD) includes 25 Internal Troops units, which are of good quality and intended for use to combat insurgency, border security and for counter-terrorism purposes. These units usually have a unique name and official OSN number.
They are very well-trained and equipped, being far superior to the regular Russian infantry. Their missions may include reconnaissance missions and regular combat operations (mostly house-to-house close quarters battle assaults). They (especially "Vityaz") have sometimes served as the back-up team during the counter-terrorist operations by team "Alpha", much like how United States Army Rangers work with 1st SFOD-D (a.k.a. "Delta Force").

Today the current spetsnaz formations under the internal troops are as follows:

Believe there is also the 30th OSN in Stavropol and now the 35th OSN in Crimea.
franco

GarryB wrote:
MVD is the Russian ministry of internal affairs, so their special purpose troops will have missions like dealing with terrorists inside Russian territory. They would deal with things like hostage situations like Beslan.

There is also the SOBR for counter-terrorism operations

SOBR would be the equivalent of Police SWAT forces.

OMON are the equivalent of reaction, riot or combat police in Germany, South Korea, Japan etc.

They are police, not counted as part of the military AFAIK.
franco

MVD would be police.
VV are Troops of the Interior
FGUP are private security run by the MVD protecting businesses and government operations alike. Probably most of the reductions would be from this group.
sepheronx

Apparently, they are actually profitable as well, one of the few.  So cutting their budget down is considered a stupid move.  But the proposed 10% cuts is said to be mainly management and upper echelon:
http://ria.ru/society/20150713/1126408107.html

But yes, there is talk overall.  The 10% will be spread out so the damages are minimal or almost none existent. Apparently, Russia in 2013 was the country in #1 spot for most cops per 100,000 citizens in the world.
franco

An article on the latest MVD planned reductions. Appears the private security division will take the biggest hit;
https://translate.googleusercontent.com/translate_c?depth=1&hl=en&rurl=translate.google.com&sl=auto&tl=en&u=http://topwar.ru/82411-sokraschenie-policii-kto-budet-ohranyat-poryadok.html&usg=ALkJrhgQFRrlBQjEIJSqApvpftVIlvY1oQ

Oct. 20-23 saw the 19th Interpolitech international exhibition of state security equipment, organized by the Ministry of Internal Affairs, Federal Security Service and the Federal Service for Military and Technical Cooperation. The combat capabilities of state-of-the-art arms and equipment were also demonstrated at the range in the town of Krasnoarmeisk near Moscow. RBTH has chosen a selection of the most interesting innovations from the exhibition.

The 12.7-mm VKS anti-materiel sniper rifle, also known as the Vykhlop ("exhaust"), strikes different targets at a distance up to 650 yards (600 meters). Due to its large caliber, the weapon can penetrate even heavy body armor and soft-skinned vehicles.

The drone has two flight modes: "airplane" (horizontal) mode and hover mode (similarly to a quadcopter). This means launching such a drone requires neither a catapult nor tossing into the air by hand.

The UAV (umanned aerial vehicle) is equipped with five brushless motors. In the hover, vertical takeoff and landing modes, four engines with vertical thrust operate, while a fifth, sustainer motor with a horizontal thrust also runs in horizontal flight. The drone can also be equipped with internal combustion engines, which significantly increases the time and distance of flight.

As the BS-103's developer Sergei Alexandrov told RBTH, the drone can be used by oil and gas companies for monitoring oil and gas pipelines, by border guards for protecting and monitoring areas as well as by logistics companies to deliver small loads.


3. Engineer: a menace to terrorists

Visitors to Interpolitech 2015 were also shown a number of different dual-purpose robot systems; incidentally, the robot called Engineer was shown in action right in the exhibition hall.

Produced by the company Servosila, Engineer is a small, all-weather robot for use both in civil applications (for cleaning up after technological disasters) and by the military, for example, to fight against terrorism or in urban combat.

Engineer can be sent to remote places; it is suitable both for complex terrain and urban environment. Due to its caterpillars, it easily overcomes obstacles such as sidewalks and even ladders.

The robot, which looks like a miniature tank without a turret, has an arm-like manipulator and is equipped with a laser scanner, a stereo vision system, odometry sensors and a video camera, which it can raise to a height of 4.25 feet (130 cm), which increases its vision range.

Due to its devices, the machine can not only send three-dimensional data to the operator, but also build digital maps of its route and move independently, if contact with the operator is lost for some reason.

4. Field office: laptops for the military

The laptops and tablets were poured with water and strewn with sand as well as beaten with hammers, but the equipment continued to work.

According to the developers, the computers are designed for use in extreme conditions, such as in the Arctic, in the desert, on the deck of a ship in a storm, and so on. The equipment works at temperatures from -58 to +131 Fahrenheit (-50 to +55 degrees Celsius), in the pouring rain, and even in a sandstorm.

Designed to transport personnel, the vehicle has a certain degree of protection from shrapnel, small-arms bullets and various kinds of improvised explosive devices and mines.

If necessary, the crew can lock itself in and deliver fire from loopholes, as well as from two upper compartments. The Ural-VV armored combat vehicle is designed for the Internal Force of the Russian Ministry of the Interior as troop carrier. It offers enhanced protection of its occupants, cargo and key units from small-arms fire and landmines. The vehicle is a derivative of the popular Ural-4320 6x6 truck. It has a total weight of 17,300 kg and carries cargo weighing up to 3,000 kg. The vehicle can tow an 11,500-kg trailer. Its maximum speed stands at 90 km/h and its crew is 17 troops, the driver included. The perimeter and roof of its armored module have Class 5 protection, its transparency and frontal side Class 6 protection and its engine compartment Class 3 protection. The vehicle’s bottom protects from the blast of 2 kg of high explosives."