Isos wrote:Related to 5th generation development but not to su57. I put it here however because it is interesting to know that germans once again did better than US. They developed this jet in 1975 and was cancelled due to US pressure. They wanted to be the only ones with a 5th jet with their f-117. 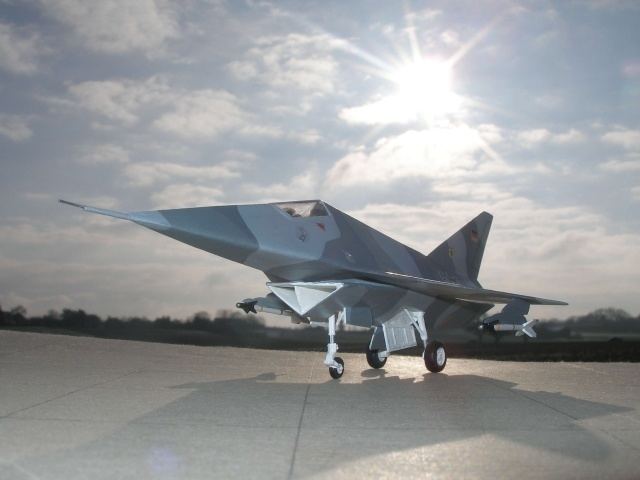 MBB was good company, with a lot of interesting concepts...both military and civilian. Were was a concept of a reusable spaceship called "Sänger", really interesting

MBB was a really visionary company, but only a few concepts were really built ;D Now MBB is part of EADS. And EADS is not a company with visionary concepts, it's now only a boring company with profit in their agenda

In the video , the pilot seems he was landing but went up again and the smoke disappeared .

This means the pilot used a more power and the smoke will subside when the throttle is reduced or using the after burner .

If you watch any aircraft manouvering around sometimes certain throttle settings will result in a bit of smoke no matter what engine is being used... western jet engines included.


Isos is right and you are right...both! Calculations for aerodynamic and EM scattering ("stealth") were done mostly manual. It was a mix of paperwork and calculations with computer. But the big great modelization of concepts were done with pen and paper. And today it's not different!!! Comptersimulations are ONLY used to prove a existing concept as good or bad, so you can reduce the risk of a practical failure. And of course computers helps saving manpower, time and the result of it...money! That's why we have so many funny but bad concepts in the past, for tanks, aircraft, spaceships, etc. The refinement of a concept is the work of engineers and their brains Wink The rate of failure is today less, that's true.

There were no home computers in the 1970s, but there were plenty of mainframe computers... computers the size of buildings... the sort of computers only financially well off organisations could afford... like the US military.

Computer modelling and design was a great way to do basic tests to see how a design might perform without going to the cost and time needed to build scale models and test them in wind tunnels.

With computer modelling you could test tens of thousands of weird and strange designs and fairly quickly eliminate the ones with fatal flaws, so while you are effectively trying an enormous variety of different solutions you can narrow them down to a few dozen designs that you can then test in a wind tunnel or a radar field to determine more solid ideas of what works and what does not.

In the 1970s NASA used computer models to define the ideal shape of the US Space Shuttle... it wasn't cheap... they spent about 2 billion dollars on it, but came up with something they could build at the time with the materials and technology available. The Soviets adopted the same basic shape because they knew pretty much what NASA had tried and tested and knew it was a waste of time trying to make something different.

Computers in aircraft at the time were simple analog hard wired models where you needed to upgrade the entire system to add new weapon types... it was slow and expensive and nothing like more modern plug and play type systems that just need software updates to add new sensors or weapons or other equipment.

Isos is right in the meaning of "multirole". During cold war the aircrafts were highly specialized, but not due less computer power...it was because specialzed aircraft are simply better in their job! And old aircraft with up to date modern avionic are still very deadly. Multirole comes into play in times of cost reduction. And this was the only reason for the F-35...it was a political decision, not a solution prefered by US Military.

Old computing chips were slow and not able to process a lot of data very quickly... a modern smart wrist watch has more computing power than was used to get people to the moon, but analog computers were used that were hardwired just to do a specific job. A calculator doesn't need a super CPU just to do basic calculations and even the most ancient computer chips from the 1970s and 1980s can perform calculations faster than a person can push buttons on a calculator.

The point is that the exponential increase in processing power meant they could start to do much more than the old calculator hard wired computers, so features could be added using software instead of adding new bits of hardware.

Multirole fighters only really became possible in the late 1980s and early 1990s with processors like the 286 and 386 and 486 chips... which are pre pentium dinosaurs but the requirements of a fighter plane were not that big.... they had dedicated computers processing radar information, so from the target distance and direction and speed interception points were simple calculations, and the times needed for the target to be illuminated to guide a SARH missile like SPARROW could be calculated too and managed by a simple computer. What started to require serious processing power is digital video of ground targets and transmitting such information back to HQ instead of using wet film for recon that had to be flown back to base and developed before the intel could be used...

Most of the time a multirole aircraft is not as valuable as it sounds... accountants love them because on paper it saves money, but it often also makes them more expensive so you can afford less than you probably want.

Having said that a MiG-21 and a MiG-23 and a MiG-27 and an Su-17 could all be replaced by a MiG-29SMT... it has better weapon options than any of those aircraft, and while its single barrel 30mm cannon doesn't offer the same fire power as the 30mm gatling on the MiG-27 or the twin 30mm guns on the Fitters, and the MiG-29SMT does not have the acceleration of the MiG-27 it has weapons that exceed the performance of any carried by the older generation aircraft... it is a better dogfighter than the MiG-21, it is a better interceptor than the MiG-23 because it can carry much more potent missiles and has a better radar and IRST, and in ground attack it is as good as the MiG-27M or MiG-27K... and would be rather more effective in the swing role in that it could hit targets with TV or laser guided bombs or missiles and then defend itself with R77 and R73 AAMs in the same mission.

New 5th gen and 4++ gen aircraft are now being called omnirole where they are expected to perform a range of roles within one mission using extensive sensors and datalinks to find targets like a recon aircraft... engage enemy aircraft like a fighter, or any ground defences like a SEAD aircraft... monitor or record the results of those attacks and pass the information to HQ so it can be decided if follow up attacks are needed and then return to base for rearm and refuel.

For a long time the military talked about C3IR... command, control, communications, intell, and recon... it was in the late 1980s they added the extra c... computers... to make it C4IR but it is a very very important addition that made a difference across the board in terms of everything.

Is it a missile detector (MAWS) behind the cockpit on the right ? Or some sort of camera for the pilot's helmet to zoom or use thermals ... ? 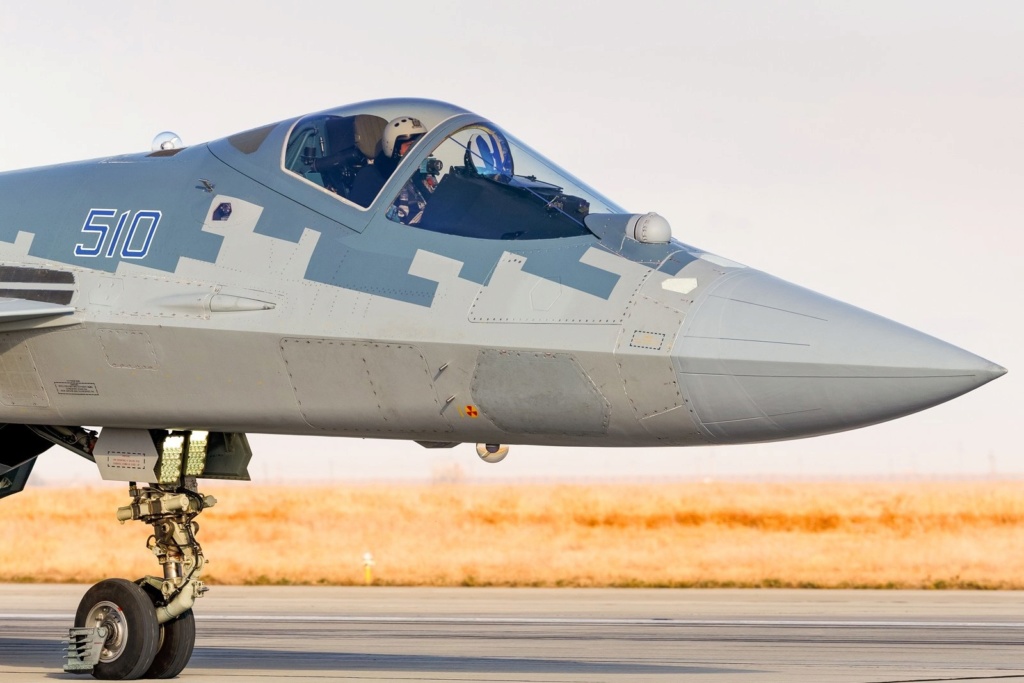 The bubbles on the chin and on the back of the neck are the laser emitters, the optical window you see on the left of the 5-10 inscription is for the MAWS. What it specifically is in terms of thermal/UV nobody really knows for certain. The Su-35S has both IIR and laser warning receivers, so I'd be surprised if the Su-57 went away from that to just UV sensors.

Notice how the design of the laser emitters has changed from the earlier prototypes, I think there has been a full rework of Su-57's optical systems so maybe earlier information can be inaccurate.

Interesting that the bubbles are totally optically clear... previously being IR only like on the Su-24 they were opaque so they looked like white plastic you could not see through (IR light passes through like it is clear but visible light does not...).

Suggests a much wider spectrum range for detection... to include UV and IR as well as perhaps visible light to detect lasers...
Sponsored content