The low number of graduates at Ryzan NCO course is abysmal. I fear this Army will never be professional.

Vladimir79 wrote:The low number of graduates at Ryzan NCO course is abysmal. I fear this Army will never be professional.

Wouldn't worry about it - the momentum for reform is here. A new problem crops up every week, but the Russian leadership and MoD is determined to follow through; which means that a solution will be found regardless.
TR1

Flight hours increased in 2012, for an average of 125/pilot in the Western Military District.
Pilots from Kursk (MiG-29SMT) flew an average of 150 hours.
The helicopter base @ Vyazma reported more than 215 hours.
Transport aviation units had a minimum of 170 hours.
GarryB

I suspect those figures are higher than NATO figures for aircrew not on active duty (ie at home in training).

This is very good news.
SOC

Flight hours increased in 2012, for an average of 125/pilot in the Western Military District.

GarryB wrote:I suspect those figures are higher than NATO figures for aircrew not on active duty (ie at home in training).

This is very good news.

Those numbers are very good, yes. I do wonder how they compare to European NATO air forces, I imagine there's probably not that much of a difference. US pilots get something like 250-300 hours per year depending on the platform, but there are often a lot of reasons for the disparities that do not necessarily indicate anything significant. More hours does not necessarily equate to more useful training, especially when you have to fly one or two hours just to reach an ACMI or bombing range.

And yes, the black coatings in the BLACKJACK intakes are in fact RAM. This is why you used to see operational BLACKJACKs on display with covers over the intakes.
macedonian

To revive an old thread...
Anyone knows how much flight hours are pilots getting in the RuAF currently?
Would be interesting to know/compare to previous year(s).
Cheers
George1

Plane initial flight training is still the L-39 "Albatros", but on the fourth and fifth courses of future pilots should gradually develop new training and combat Yak-130

"Today is a great day for all the Air-space forces of Russia - for the first time after three years in the air alone soared young guys who ever replace us in our line of duty," - said Yudin.

He recalled that the first flight is always preceded by theoretical training throughout the two years of study. Summer practice at the third, fourth and fifth courses begins with the spring and continues until the end of September.

"We have reached a good competition pilot training This allows us to select the best during training, for which we will not worry This is the most important in the performance of combat missions..", - Said the general.

Plane initial flight training is still the L-39 "Albatros", but on the fourth and fifth courses of future pilots should gradually develop new training and combat Yak-130. "Every year on the plan in Borisoglebsk and Armavir arrive at least ten aircraft Yak-130" - reminded Yudin.

In addition, in the next few years in schools await the start of deliveries of the Yak-152 aircraft, the general added. Earlier it was reported that the flight tests of the new machine should begin in the summer. Adopt aircraft planned for the winter.

"More than 500 students of the Krasnodar Higher pilots Military School in 2016, received a solid knowledge and successfully passed the theoretical training, have been flying practice on education and training and combat aircraft flying practice was conducted in four profiles of aviation:. Fighter, frontline bombers, attack aircraft, military -Transportation, long-range aviation and anti-submarine aircraft, "- said in a statement.

About 350 students of the third course KVVAUL first took to the skies on the L-39 aircraft to airfields Tikhoretsk, Michurinsk, Maikop, Nyquist (the profiles of operational and tactical aircraft and long-range aviation); on the L-410 aircraft - with Rtishchevo airfield (on the profile of military transport aircraft).

The checks carried out before an independent flight cadets have shown that in general they have a good piloting technique, high moral and psychological preparation and orientation for summer work. During the period of summer internship students have mastered the technique of piloting, air navigation and combat use. Total flying time each cadet KVVAUL made more than 80 hours.
George1

In Russia, will begin to train female military pilots

As reported by the TASS agency on August 12, 2017, the Krasnodar Aviation School for the first time in the newest Russian history will recruit girls for training in military pilots. This was stated on Saturday by Russian Defense Minister Sergei Shoigu.

"There are a huge number of girls who would like to become military pilots, we received hundreds of letters, so we decided - this year we will recruit the first group of girls to the Krasnodar Military Aviation School," the minister said.

"There will not be many of them - 15 people, but given the number of applications received to the Air and Space Forces, we can not but answer these requests, so from October 1 this year the first group of girls will start training for military pilots, - added Shoigu.

The Minister, who visited the celebration of the Day of Aerospace Forces in Patriot Park on August 12, expressed his hope that in five years the graduates of the school "will decorate such a holiday with their skill."

In 2009, the Krasnodar Aviation School already recruited a student, but not for flying specialties.

According to the portal "MK.ru", another 15 girls were given the opportunity to become military aces. Now in the Krasnodar Higher Military Pilot School named after Serov will win the peaks of the skill of combat piloting 31 young beauty. On September 1, two courses of young pilots officially started their studies. To get acquainted with the future pilots, the landing of the Public Council at the Ministry of Defense arrived on the Krasnodar territory. The goal was outlined by the Chairman of the Council - Glavred "MK" Pavel Gusev: to see with their own eyes how the future rulers of the sky comprehend flight science. 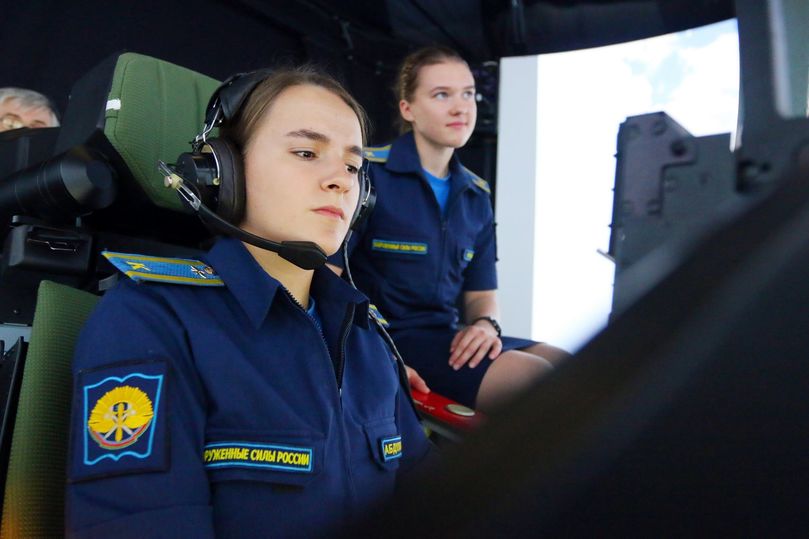 As the Department of Information and Mass Communications of the Ministry of Defense of the Russian Federation reported on December 4, 2018, the command of the Air Force of the Russian Aerospace Forces summed up the results for 2018.

In 2018 academic year, the main efforts in the training of the Air Force of the VKS focused on maintaining the achieved level and flight crew training to perform tasks for the mission, preparing young crews for combat single day and night in simple and complex meteorological conditions and improving the qualification categories of flight composition.

The personnel of the air force took part in many combat training activities, the main of which were: the Vostok-2018 maneuvers, a special exercises exercise for the air forces in preparation for the Vostok-2018 maneuvers, an air skills training contest the Aviadarts flight crews, the BARS-2018 and Aviaindra-2018 international maneuvers, tactical flight exercises in formations and units of long-range and military transport aircraft, as well as in aviation units of the air forces and air defense armies of military districts, etc.

All the tasks in these events are completed in full and with high quality.

The flight plan in the 2018 school year was fully implemented, the total flight time increased by more than 6,000 hours compared to 2017. The average flight time per pilot was more than 100 hours, for a young pilot - graduate of 2017 more than 120 hours.