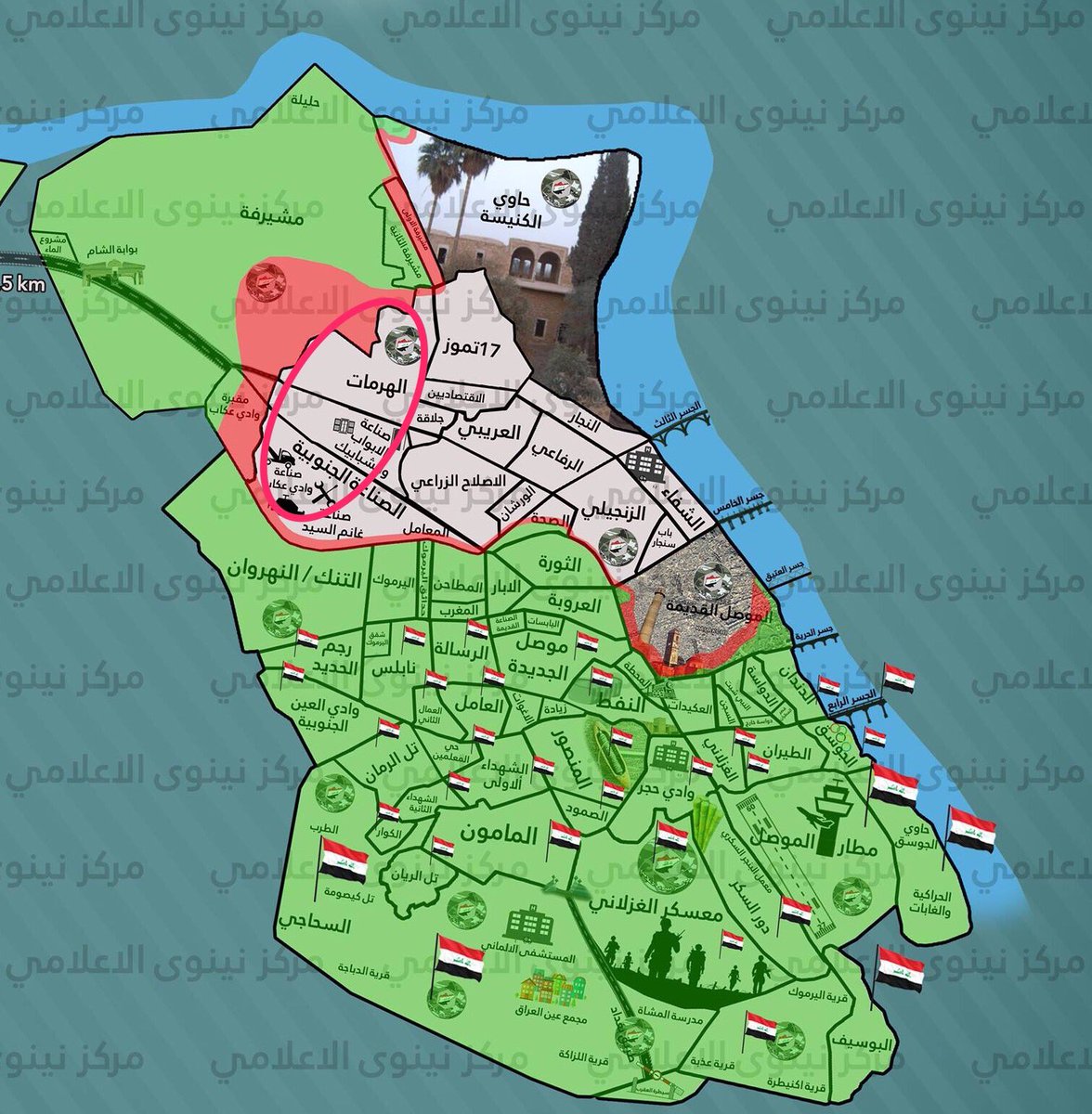 According to the Iraqi media, US-led coalition airstrikes hit PMU units deployed in the area in order to prevent ISIS infiltration attempts from the territory of Syria and resulted in casualties among the PMU personnel.

The incident took place in the area close to the al-Bakumal border crossing roughly in the same time when the US-led coalition carried out airstrikes on Syrian government forces advancing near the al-Tanaf area.

Some experts believe that Washington was concerned that the PMU could help the Syrian military to secure the Syrian-Iraqi border. The US sees this possibility as a threat to its influence in the region.


After seeing this, the following joke came to my mind:

"Do you know what is the difference between a British soldier and an Iraqi one? No? Then welcome to the US Air Force!"

This joke is from the era of the Second Gulf War, after an USAF friendly fire incident (the situation here is the same, just with different belligerents).

There was a tweet that suggested that there were PMU in the Syrian convoy that got hit.
franco

JohninMK wrote:There was a tweet that suggested that there were PMU in the Syrian convoy that got hit.

at least by name)

Destruction of the Iraqi Abrams tank by jihad mobile 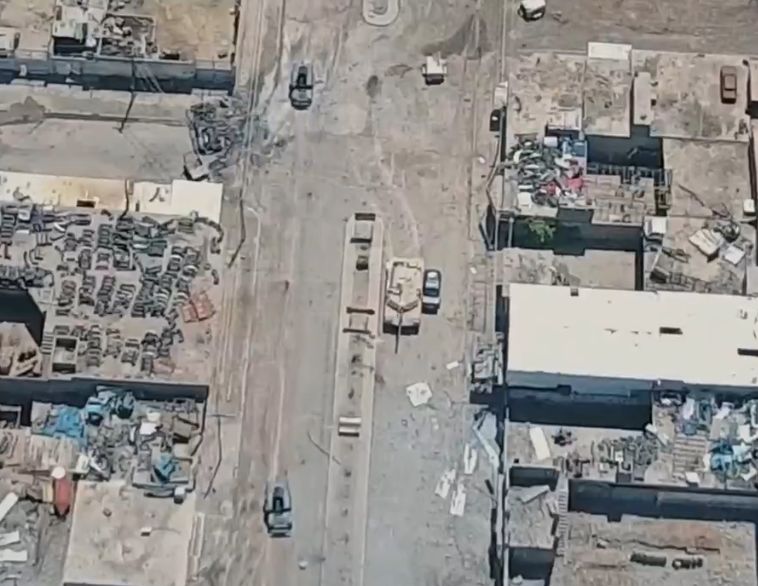 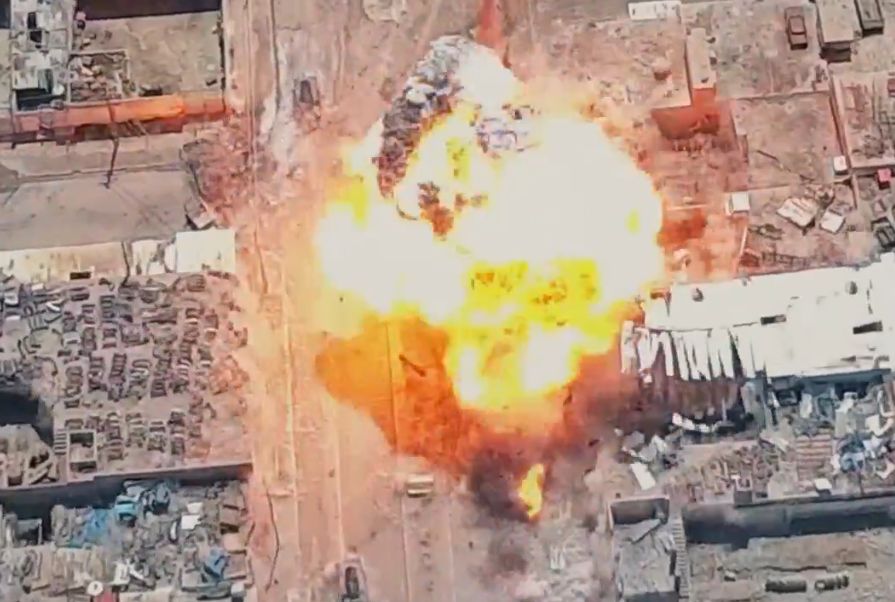 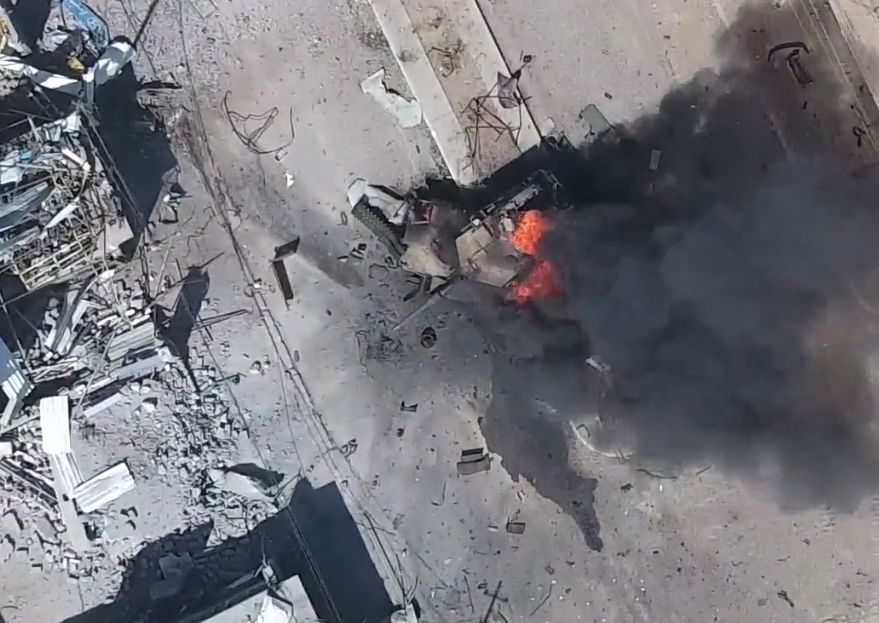 Interesting move west. The US will not like this

Significant move as PMU will eventually reach the Syrian border. On the other side Hasakah and Deir Ezzour. Map via @LCarabinier

Either Iraq/syria remains whole and integral or it does not . In order for maintaining territorial integrity of Iraq/syria , then Iraq/syrian government forces must reach and protect the borders . There is no other alternative . Any truly national and democratic forces can not deny goverment passage to reach border areas . For purposes of protecting against terrorist groups infiltration intoIraq/ syria . Any other traffic to supply friendly forces , in their fight against terrorists , can go ahead . Any attack by outside forces against national Iraq/syrian forces , in their attempt to establish control over their own borders , must be retaliated . Democratic and national Iraq/syrian forces can and should contribute troops to guard border areas . And defendIraq/ syria against terrorist groups . If the so called " national and democratic " forces , will not allow passage for government forces . Then in those areas they must be removed .

This gear required a lot of manufacturing support, these are not simple bits of pipe. Where did it come from? 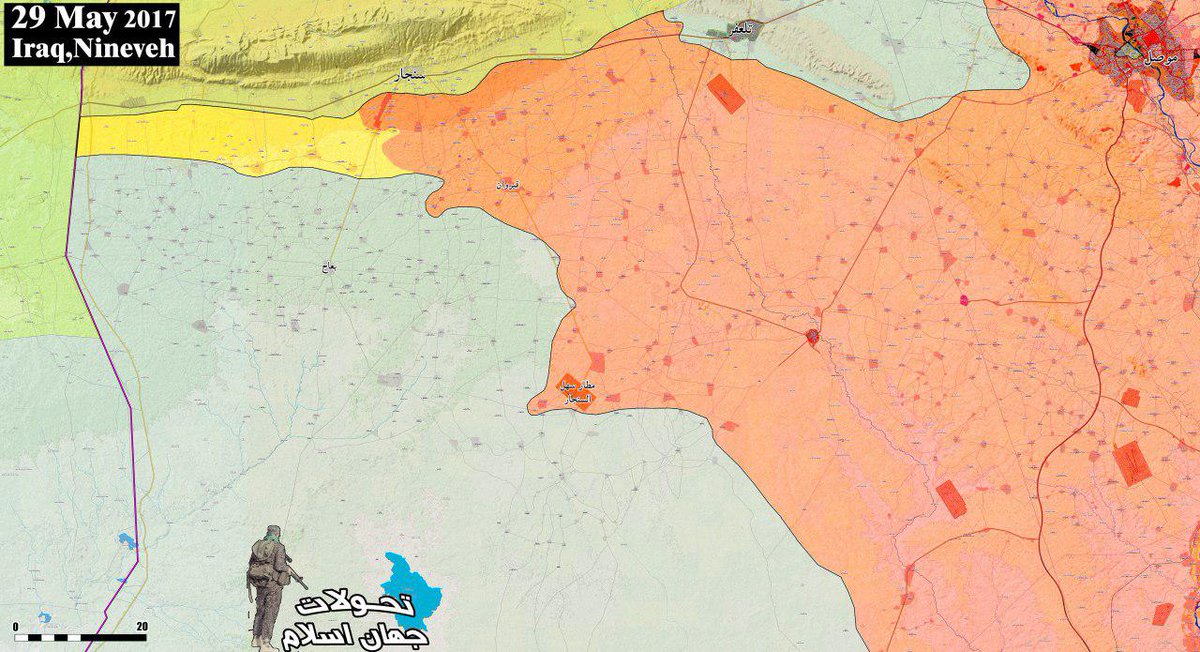 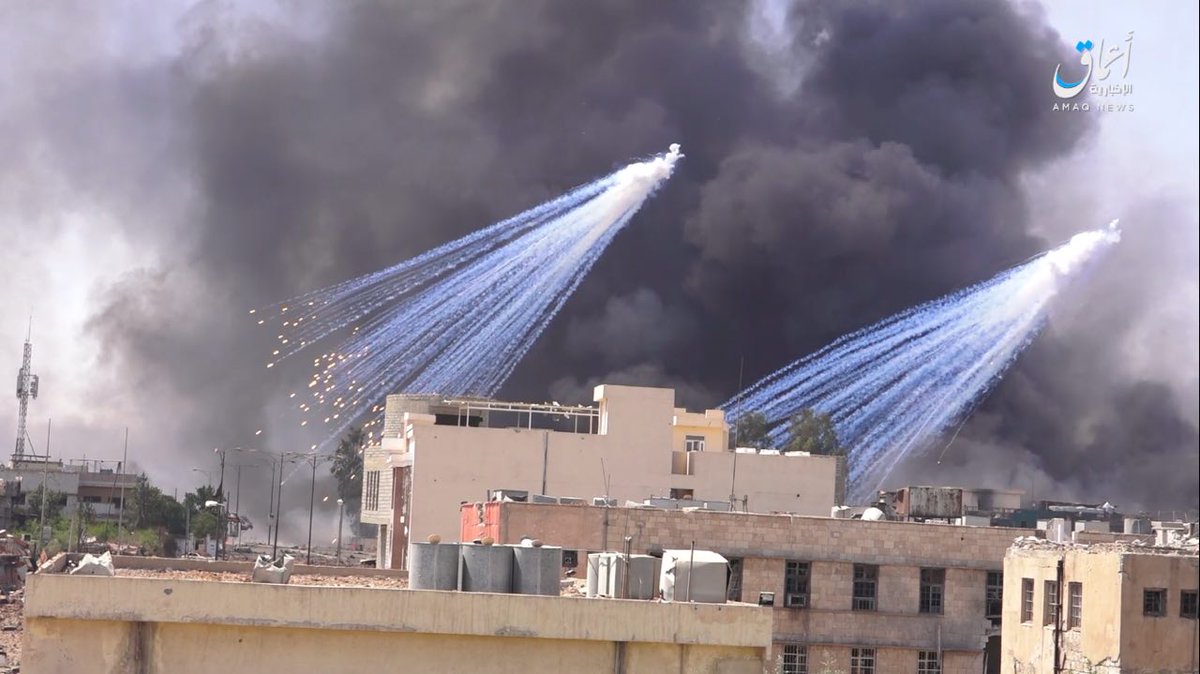 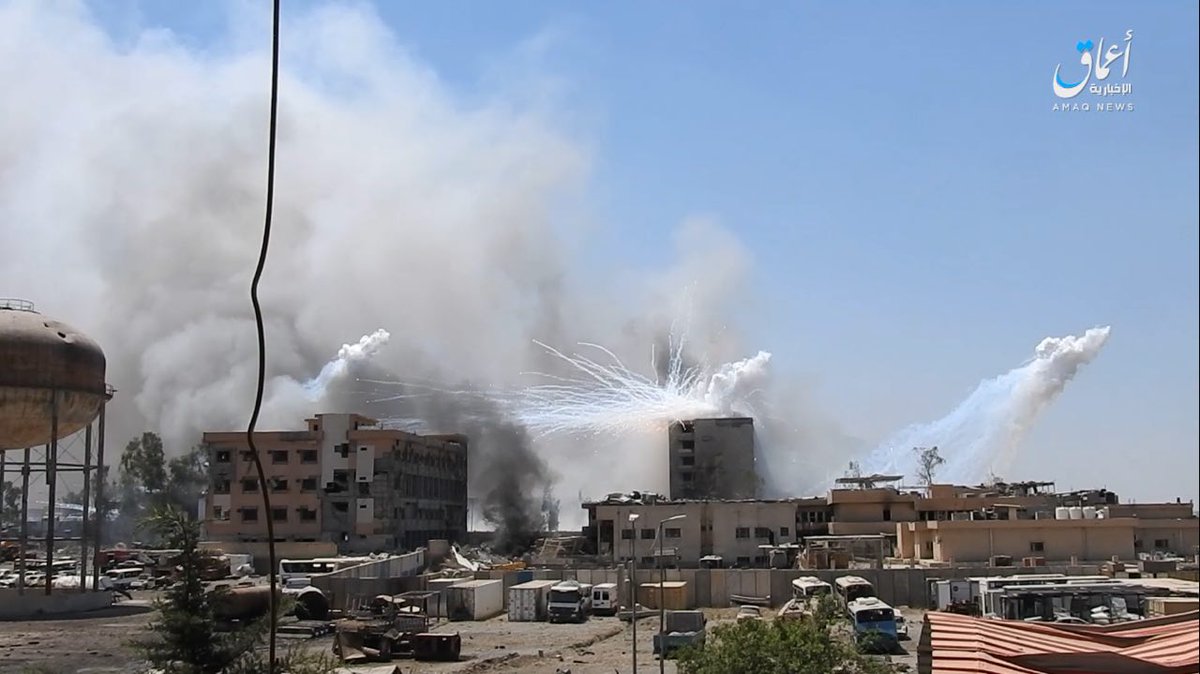 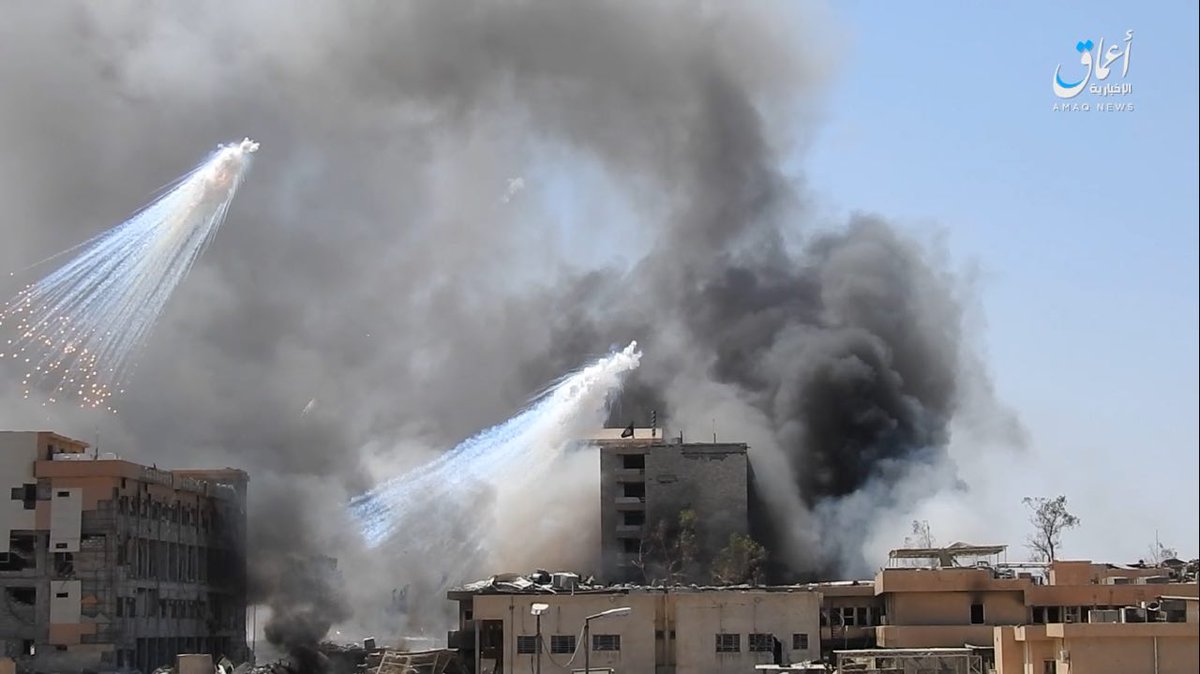 Is it an international war crime to do that?
calm

No it's not.
Only if Russia does it it's a crime. 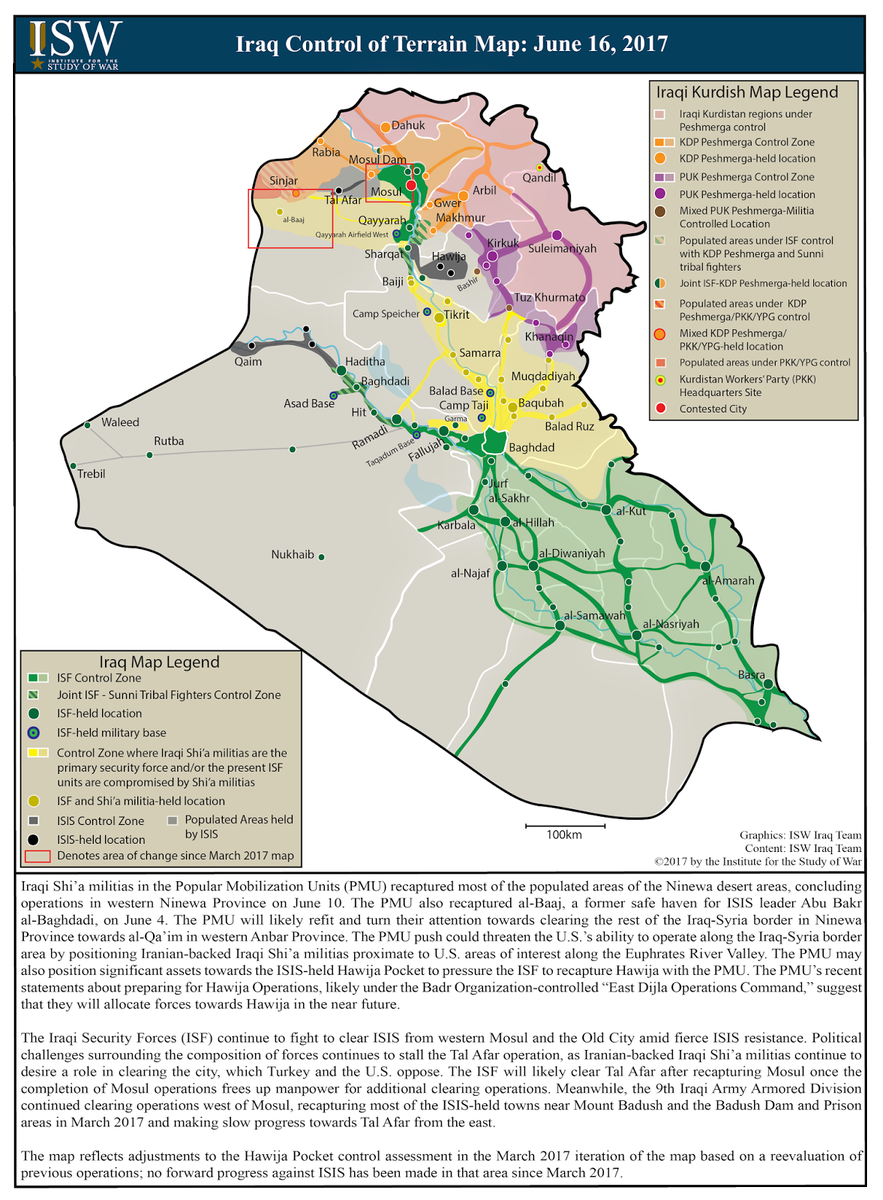 Advanced gear on the front line 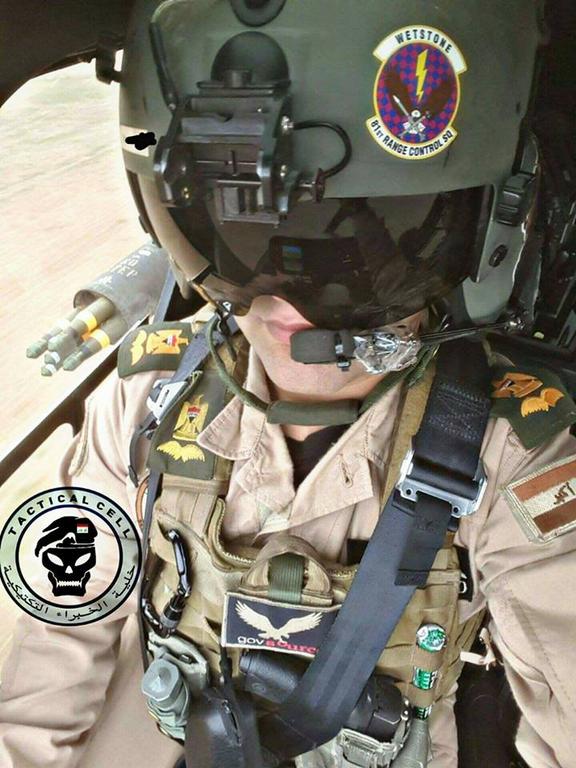 This follows the high level meeting between Iraqi & Syrian armies leadership in Baghdad, fight against IS and regaining/managing border were issues discussed

Iraqi forces have liberated the border-crossing of AlWaleed on Iraqi-Syrian boarders.
Simultaneously #SAA is advancing in the same direction According to ISIS, 40 Iraqi soldiers were killed as a result of the attack and many others were wounded, including the director of Al-Baghdadi township, Sharhabil al-Obeidi and the commander of the Fourth Corps, Kamal al-Obeidi.

According to the ISIS-linked News Agency Amaaq, the attack lasted for 6 hours and ended with the four attackers bowing themselves among with Iraqi soldiers.

In Mosul city, ISIS claimed that its fighters have been able to repel an attack by the Iraqi Federal Police in Bab Jadid and Bad al-Baid districts in Old Mosul Area. 10 Iraqi soldiers were allegedly killed and 30 were injured in the failed attack.

ISIS also claimed the killing of 7 Iraqi SWAT officers in the Al-Mushahada area in Old Mosul and the destruction of a Humvee vehicle in Bab al-Kush.

The Iraqi Army hasn’t published any information about the military operation in the Old Mosul area. It is believed that the Iraqi Army does not want to give ISIS an idea about its operations due to sensitivity of the area. For example, ISIS destroyed the Al-Nouri al-Kabir Mosque after the Iraqi Army announced that its troops were 50 meters away.

The Iraqi Popular Mobilization Units (PMU) announced that it managed to foil an attack by ISIS fighters. The PMU launched heavy rockets from Tal Safouk targeting ISIS vehicles at the Syrian-Iraqi border that were preparing to attack the Tal Safouk crossing. According to the PMU, ISIS militants fled following the shelling.

Hahahahahaha... Sounds like old Soviet propaganda, just like Panfilov's 28 guardsmen, for example. I bet this will be a popular urban legend among future jihadists On Saturday, the Iraqi Army liberated the Mar Toma Church in the Old Mosul area on the right side of Mosul city. Unfortunately, ISIS had almost completely destroyed the church previously.

https://twitter.com/_/status/878323080568766464
Furthermore, Iraqi forces managed to kill Jasim Mohammed Akoub, an ISIS commander in Old Mosul while he was trying to cross the Tigris River towards the left side of Mosul.

From its side, ISIS claimed that two suicide bombers managed to infiltrate the left side of Mosul and attacked the Iraqi Army gatherings in Al-Muthana district, allegedly killing 60 Iraqi soldiers. However, Iraqi sources said that ISIS suicide bombers attacked a shopping mall and opened fire and threw grenades at civilians before they blew themselves up.

https://twitter.com/_/status/878588321705996289
ISIS has recently increased terrorist attacks against civilians in Iraq. However, this time it seems they have focused on targeting Sunni areas.

Is it an international war crime to do that?

White phosphorus... sometimes nicknamed willie peter in the west for the initials WP.

Traditionally used to generate smoke rapidly for marking targets, but it burns white hot and will burn straight through flesh to the bone and cause nasty wounds on human targets on contact.

The white gas it gives off as it burns is also toxic.

The west tried to claim the Russians used it in Grozny but no evidence was forthcoming.

Mines and demining there will take a long time, but the organized resistance of the IG is broken and the city is finally taken by the government troops of Iraq.

Photos of the latest battles from the agency Frans Press via http://jamejamonline.ir/image/imagereportpreview/2911370379660769430/ ادامه-دریریها-در-شهر-موصل-عراق

The ruins of the old part of the city destroyed in the course of fierce battles with the IG fighters, who until the last kept the defense there. 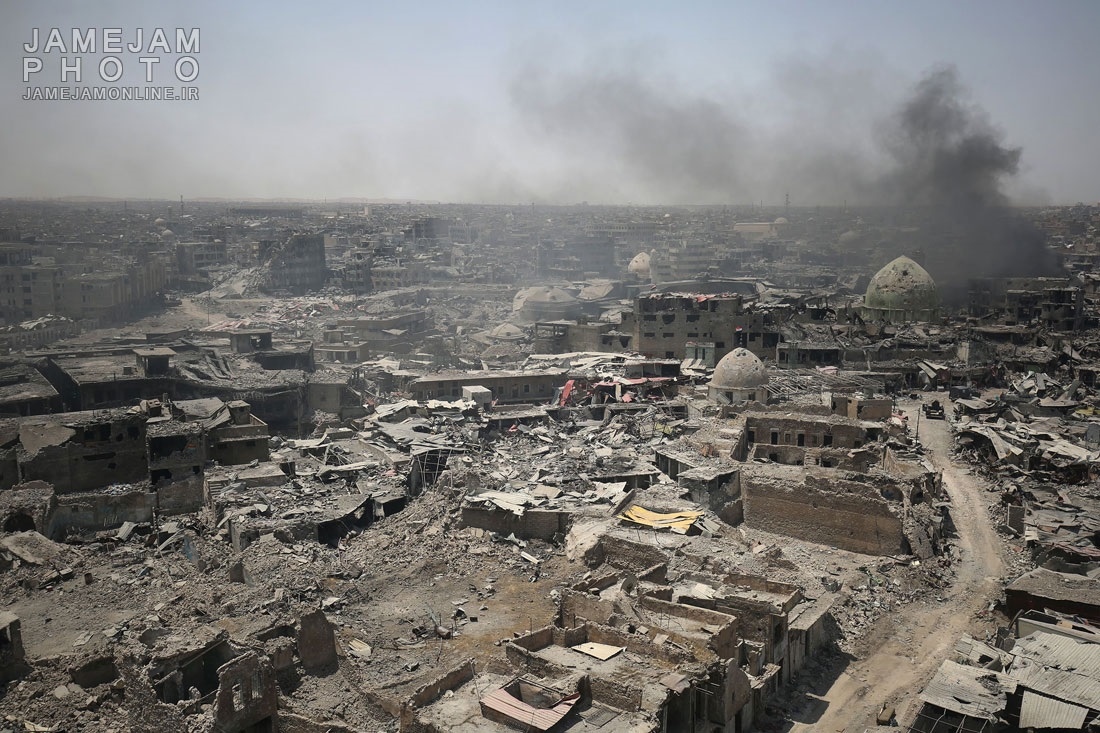 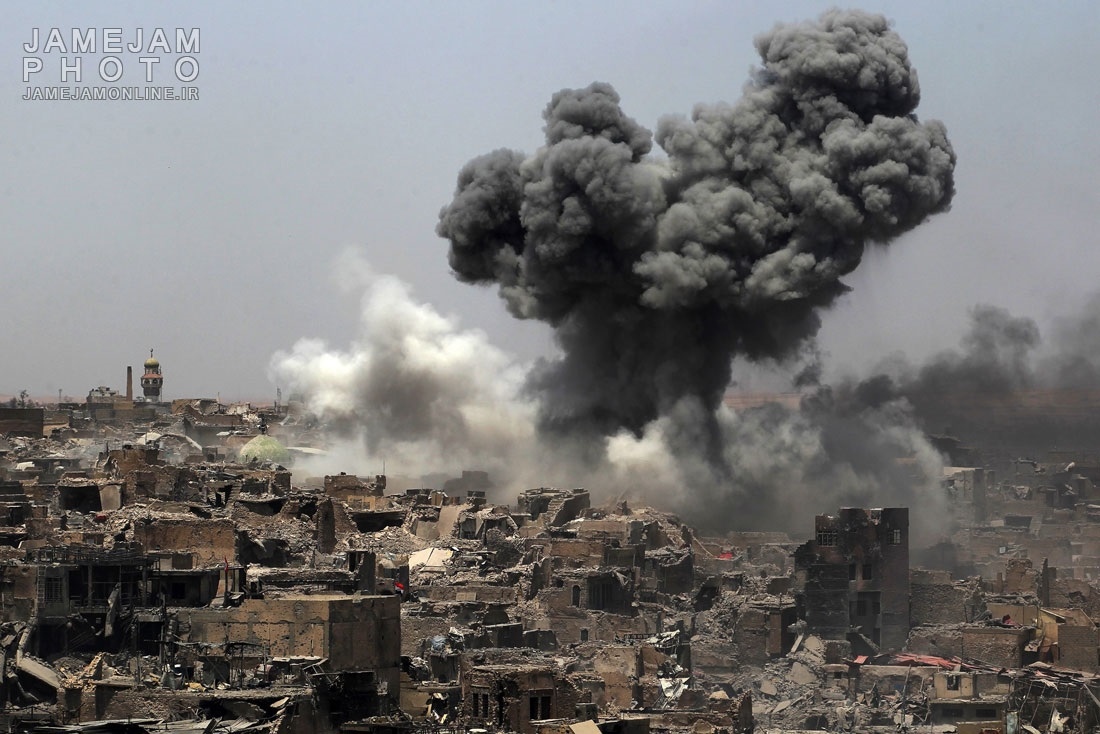 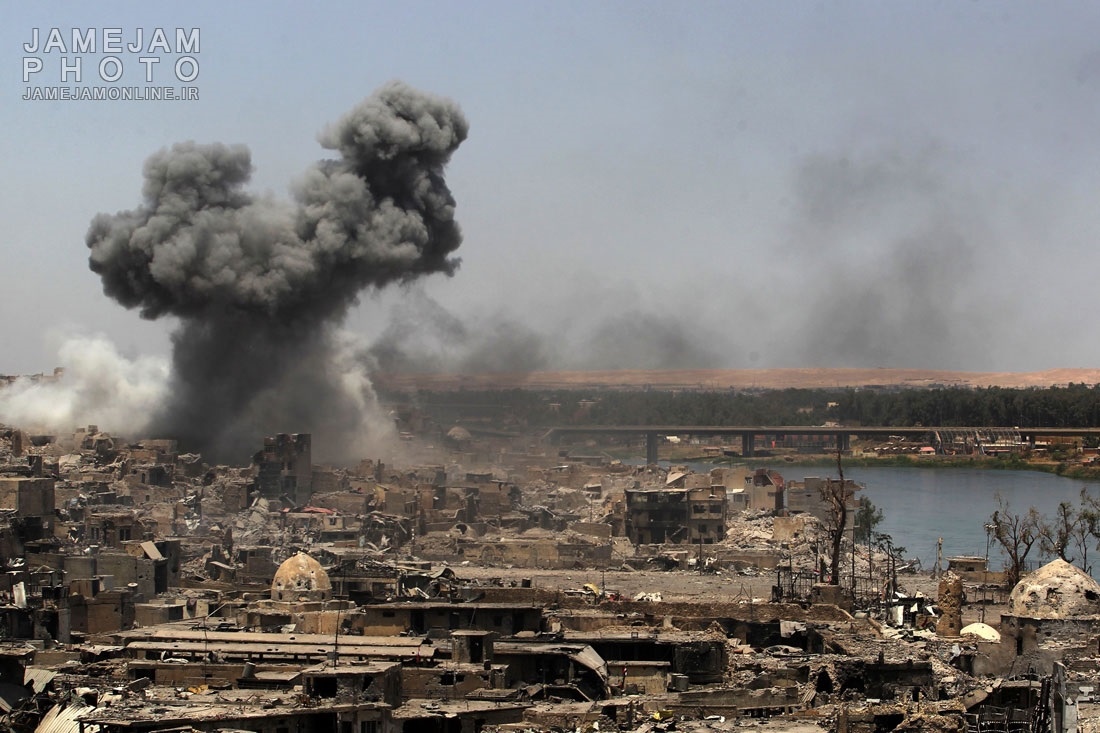 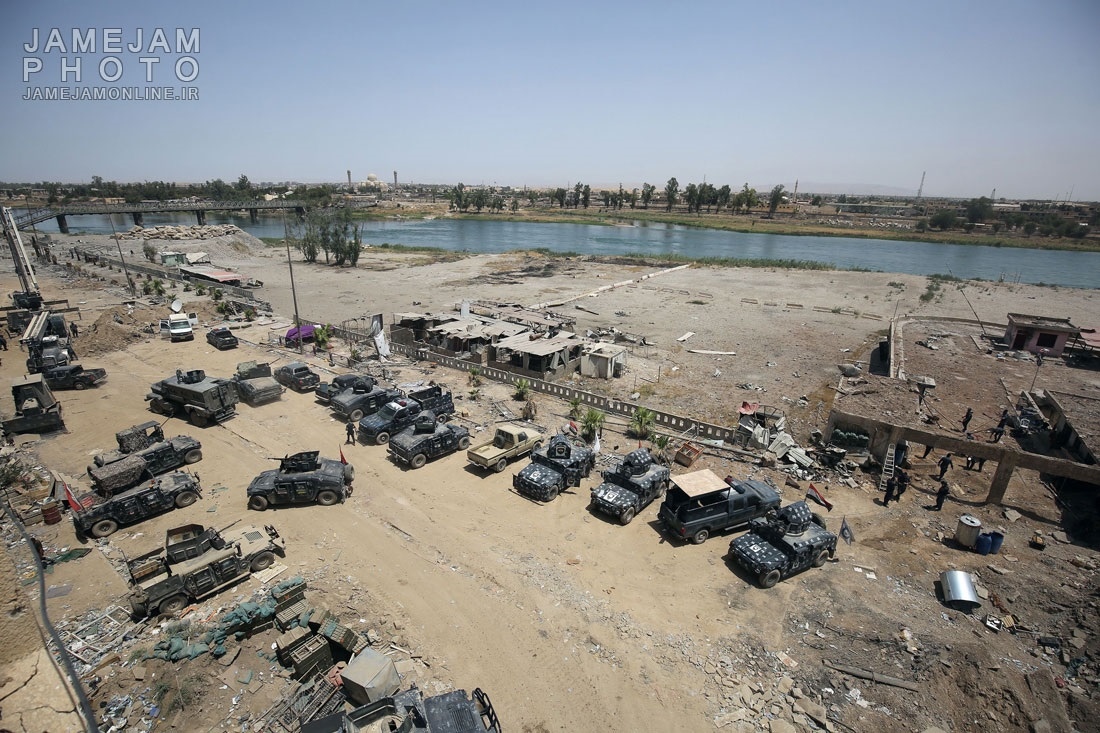 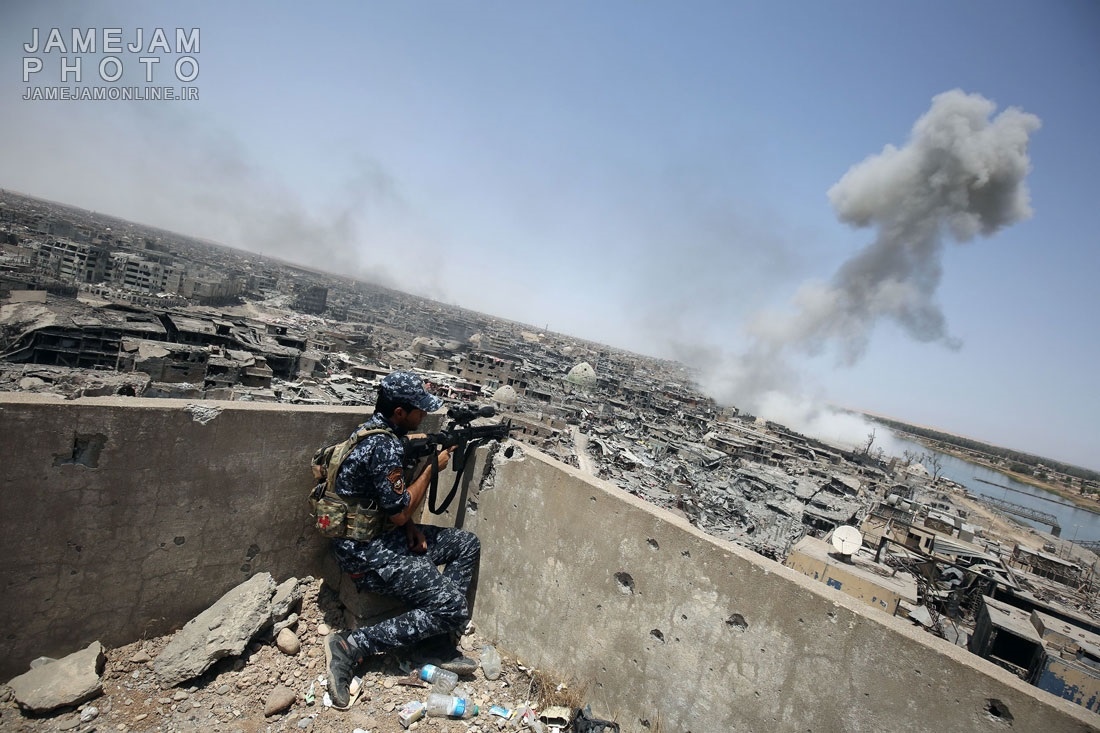 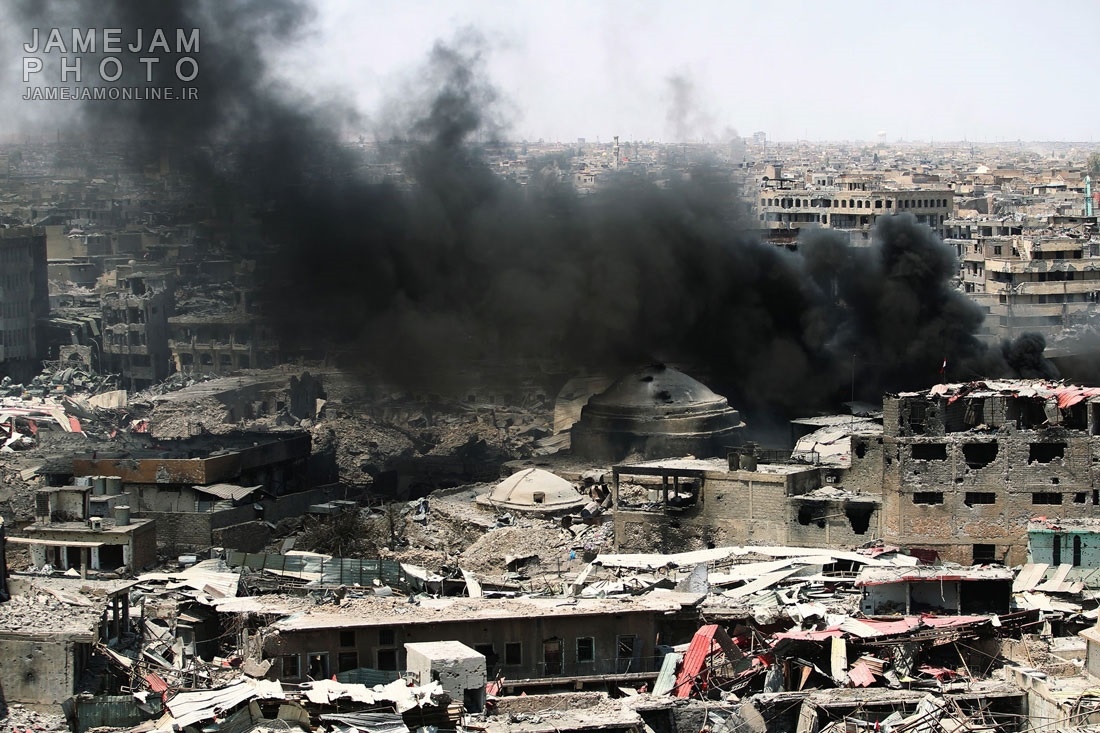 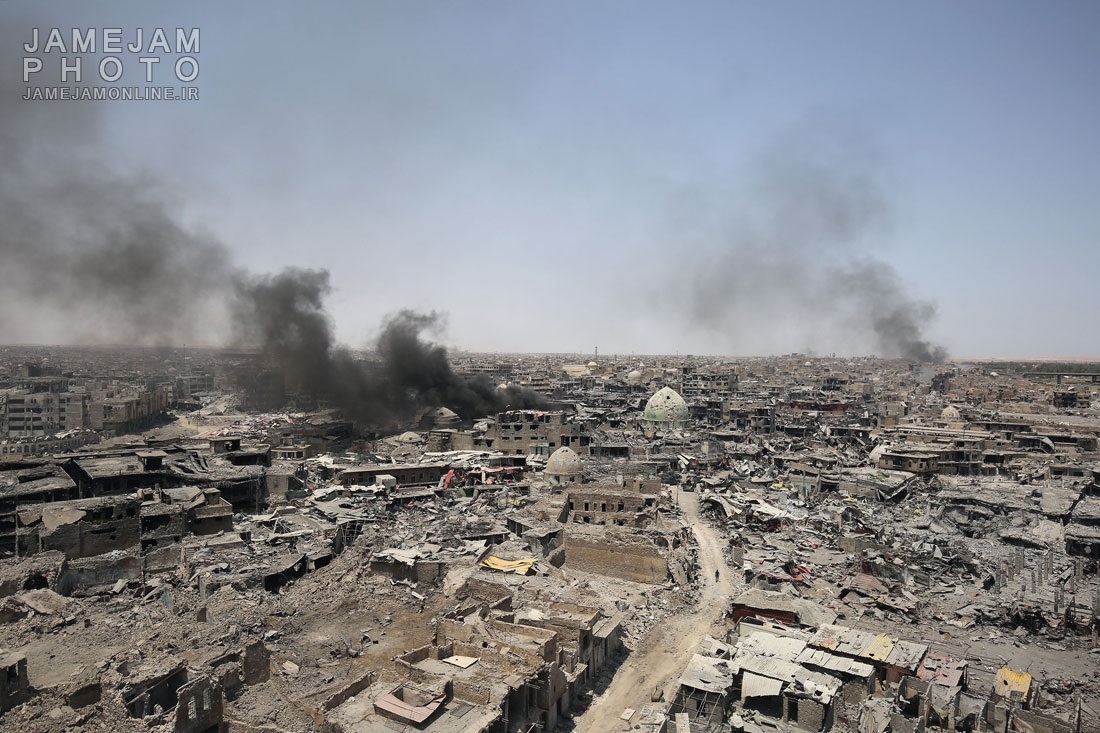 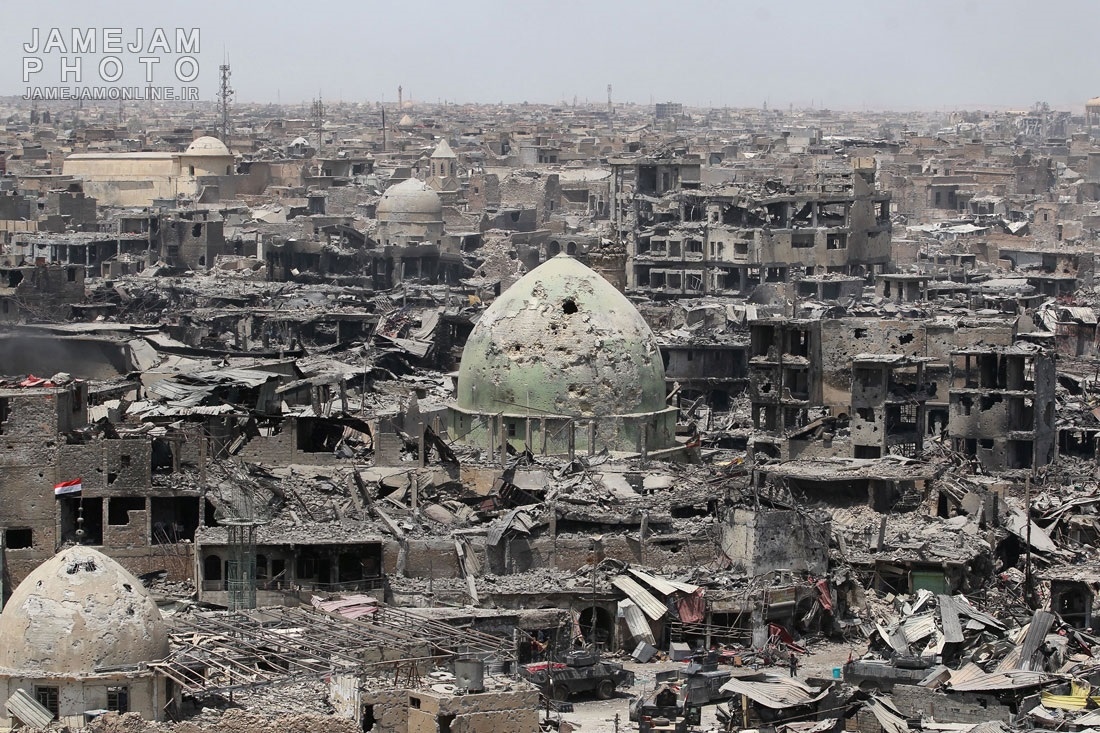 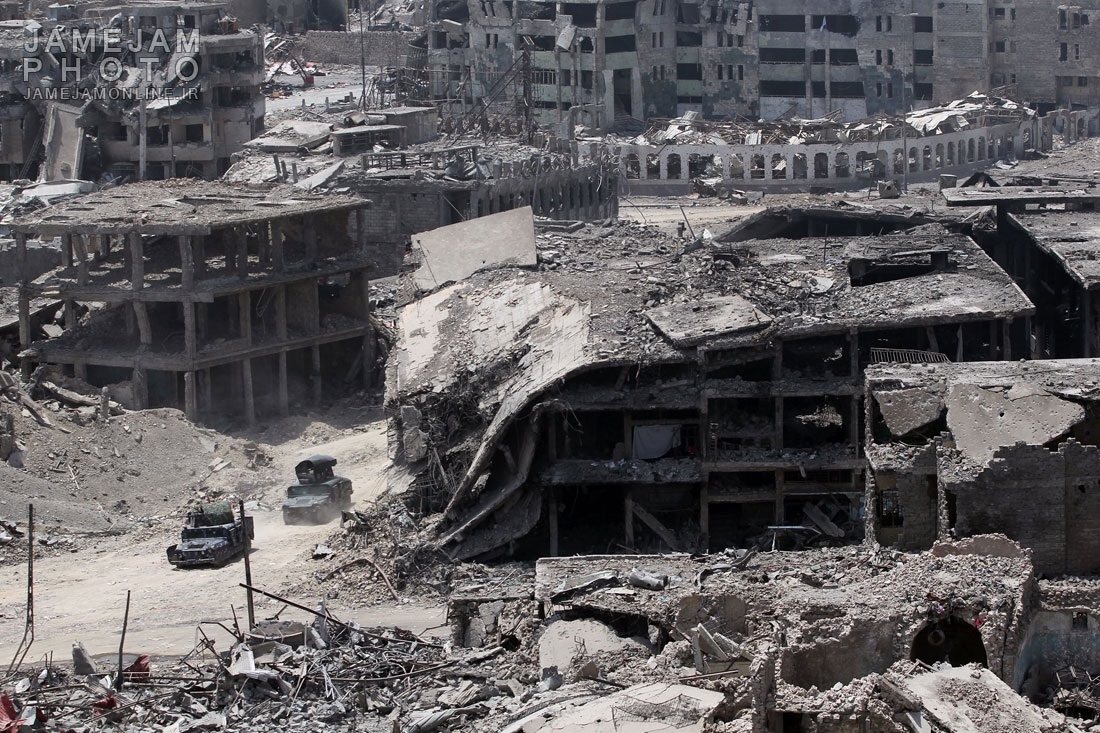 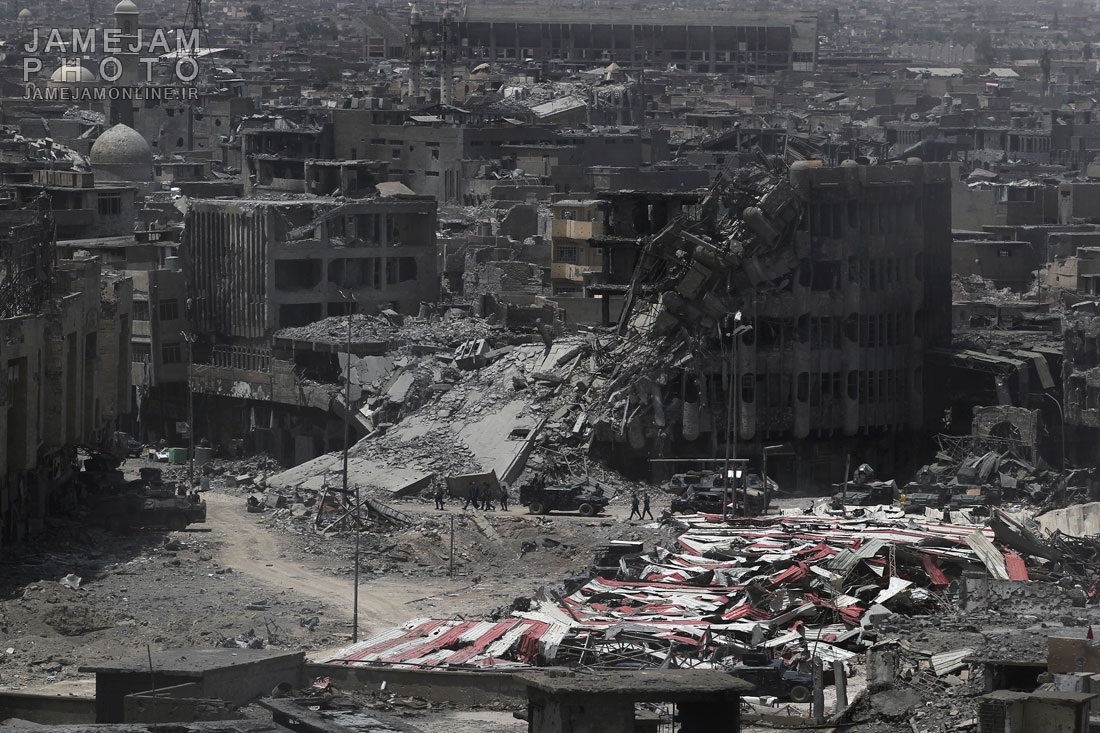 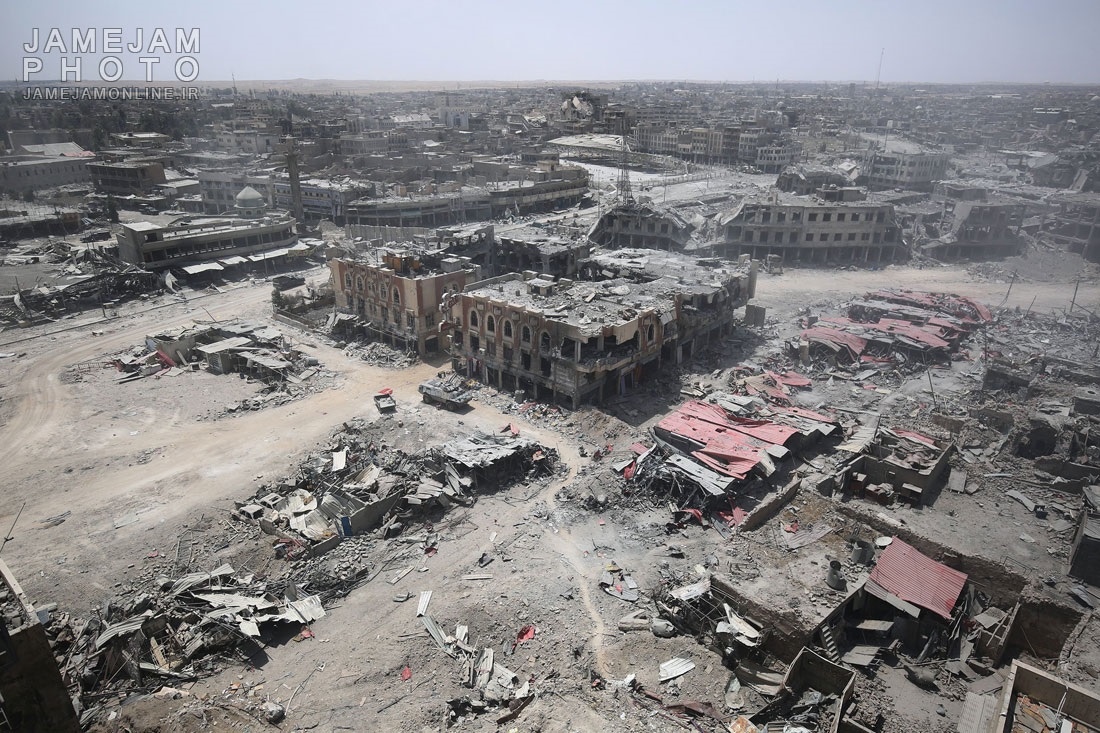 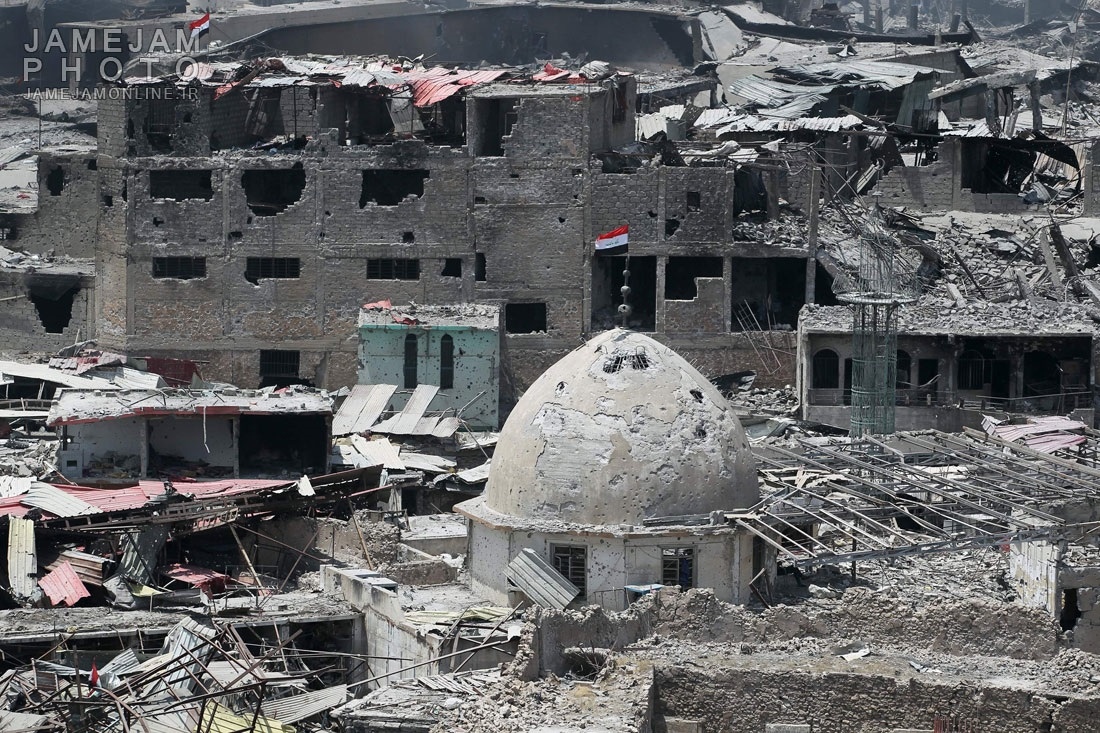 Looks like west Mosul media blackout getting tighter. All checkpoints issued with instructions not to let journalists cross River Tigris.

75-80% buildings in western Mosul destroyed, compared to 25-40% in eastern Mosul. Still high damage, but not really comparable. See below:

The Iraqi Popular Mobilization Units (PMU) have opened a military camp in southern Sinjar in order to traing local defense force that will mostly consist of Yazidi fighters.

The stated goal is to train Yazidi PMU units that will be able to keep security in southern Sinjar and to fight remaining ISIS fighters in the border area. The PMU will traing and arm Yazidi fighters with heavy and light weapons.


With this move, the PMU will increase security in the Yazidi-populated area and to expand its presence in southern Sinjar. Earlier this year, clashes between local Yazidi militias and forces loyal to the authorities of the the Kurdistan Region of Iraq took place in Sinjar. The PMU presence will likely allow to avoid further tensions between the two sides.

Some unconfirmed reports of a Coalition strike, possibly HIMARS, on a PMU position with up to 40 dead.

#BREAKING - Over 70 casualties from #US strike on #Iraqi #PMU along #Syria-#Iraq border. #ISIS attacks along positions taking advantage


Or possibly it was just this on its own with the Coalition strike just bad information. Same photos in both posts.

#Iraq: #ISIS has raided a large #PMU base near #Al_Tanf Border Crossing. Many #PMU fighters were killed & weapons & vehicles were captured.

40 killed and 35 wounded by #ISIS (not #USA) artillery, suicide and militant attack against Hashd Kataeb Sayed al-Shuhadaa close to al-Tanaf

Looks like my previous post is in the wrong thread. This attack took place in Syria. From AP

BAGHDAD (AP) — A powerful Iraqi Shiite militia said Tuesday that at least 40 of its militiamen were killed in an attack the previous day on its positions across the border in Syria. The militia blamed the U.S.-led coalition for the assault but the Islamic State group claimed its fighters had targeted the militiamen.

The deputy head of the militia, known as Kattaib Sayeed al-Shuhadaa, accused U.S. forces of carrying out the early Monday assault. The Baghdad-based spokesman of the U.S.-led coalition, Army Col. Ryan Dillon, dismissed the allegation, saying on Twitter that no coalition airstrikes took place in the area at the time.

According to the militia’s deputy, Ahmed al-Maksousi, they were hit by artillery fire in Syria’s Jamouna area, about 12 kilometers (about 7.5 miles) from the Iraqi border.

He said the attack was launched from around Iraq’s city of Mosul, recently recaptured by Iraqi forces from the Islamic State group, and was followed by an on-the-ground assault by S militants. Along with 40 killed, at least 30 militiamen were wounded, al-Maksousi added.

The militia vowed “this act will not pass without punishment.”

In an online statement, IS said it staged a three-pronged attack that included a suicide bombing, followed by fighters storming the militiamen’s positions. The group added that one IS fighter was captured.