George1 wrote:Zelenodolsk plant was awarded the contract for five small missile ships of the 22800 project

Interesting news. It turned out that Almaz shipyard was also competing for this contract but it went to Zelenodolsk because Yuri Borisov dislikes USC probably due to delays and cost overruns.

Gotta say, I do agree with this approach. No reason to reward slackers and parasites with new contracts. They should either stick with large ships (the reason for their existence) or just close shop and let others handle the projects.

Both Pella and Zelenodolsk are private companies.
hoom

This is good, Zelenodolsk has a solid record for quick completion & more shipyards building the better

AFAIK Kerch is still in the process of rebuilding and modernization of the shipyard, so for now their capabilities are still limited.
hoom 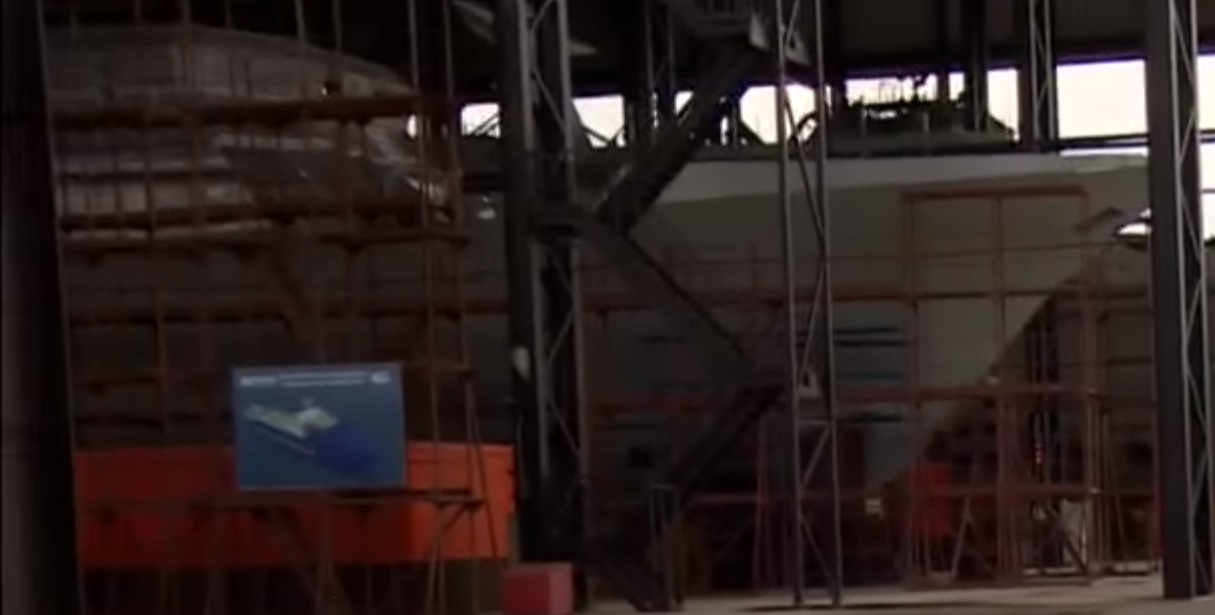 Interesting construction method where they don't seem to knock out the openings for the bridge windows before assembly on the ship but later.
TheArmenian

Project 22800E KARAKURT model displayed at Armya-2016 exhibition:
Note that this version has the E suffix which makes it an export model.
Differences between domestic and export models are not known yet. 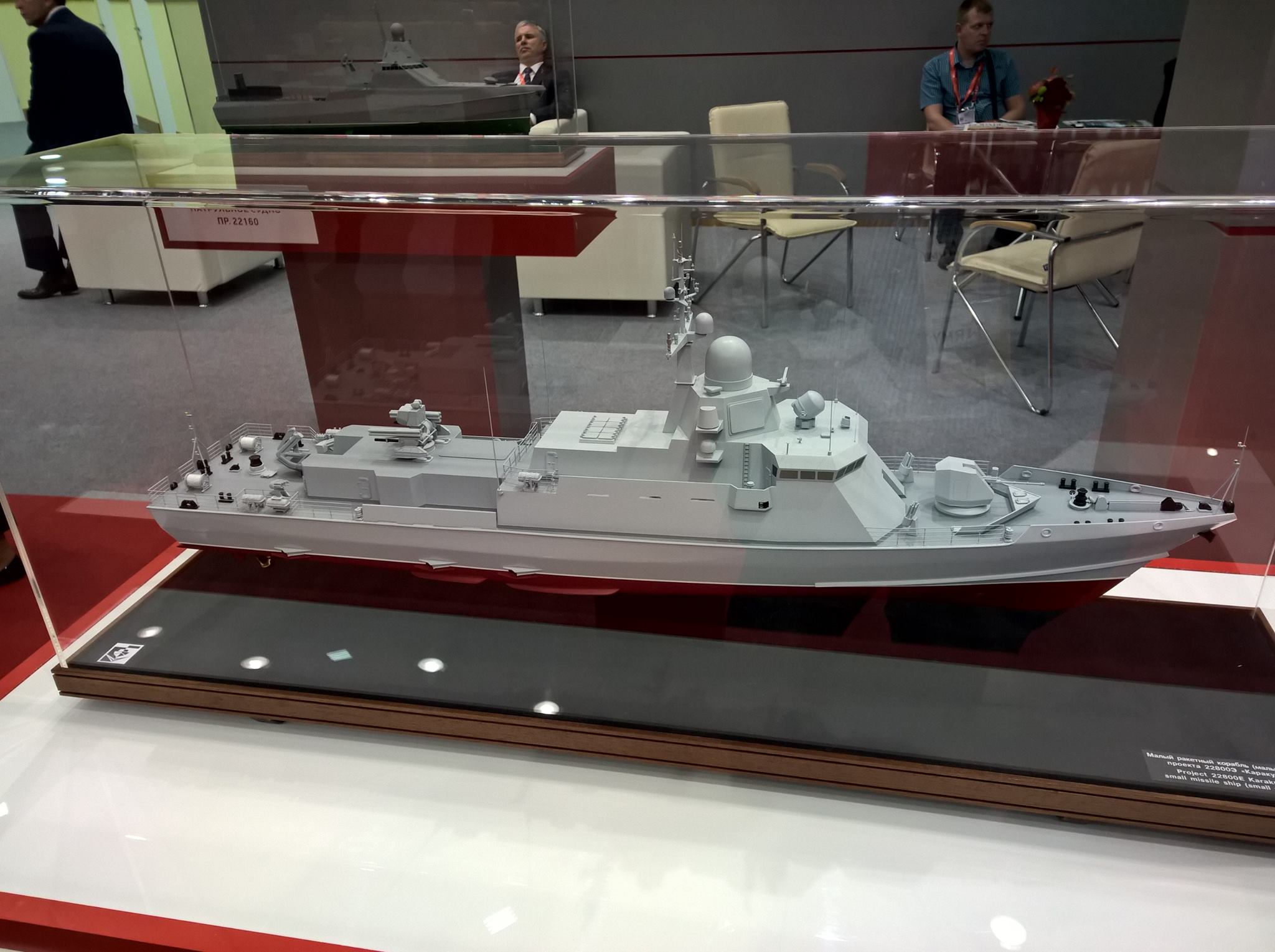 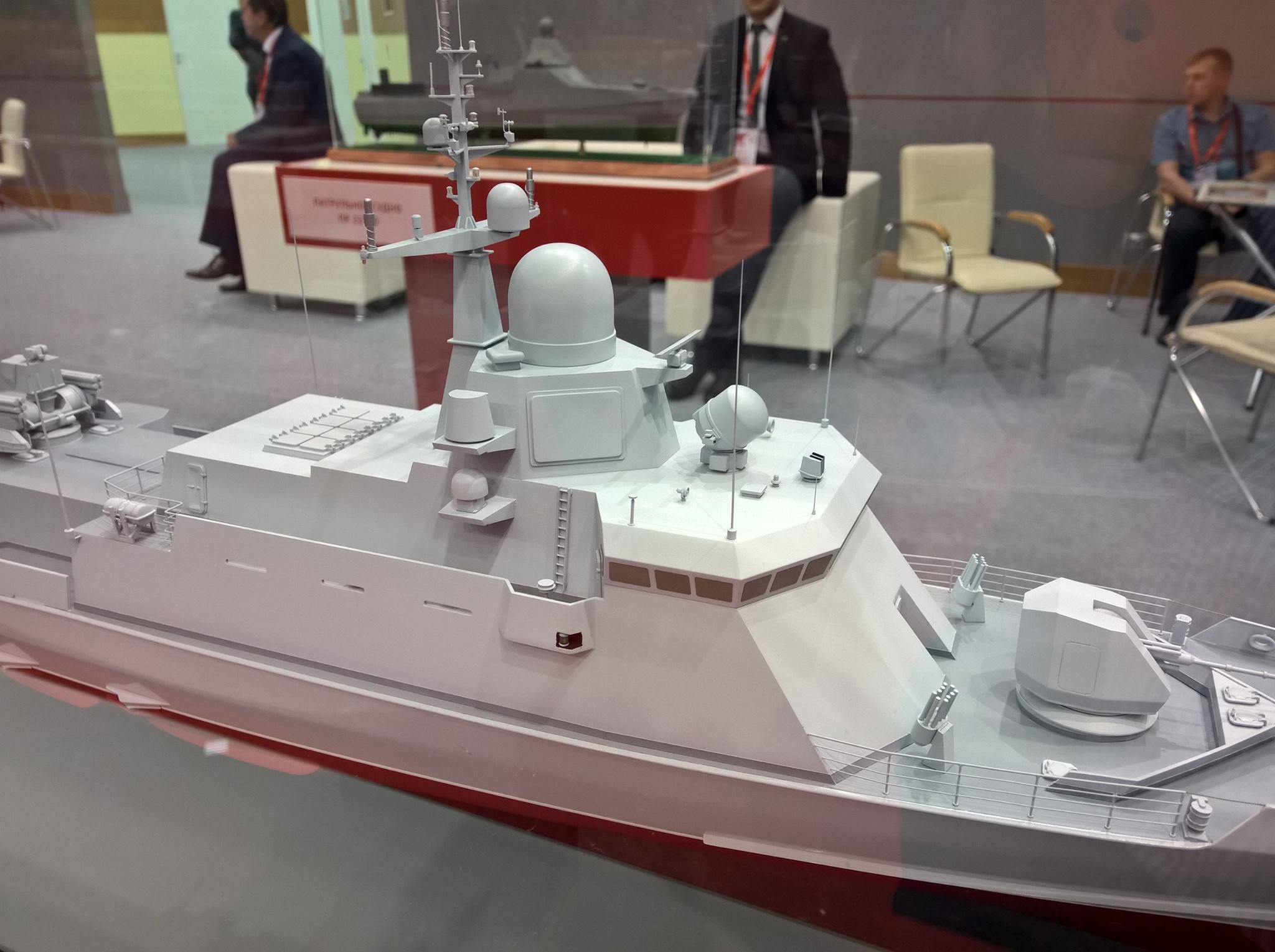 More photos of the Model plus other information. Sounds like 12 confirmed orders so far. 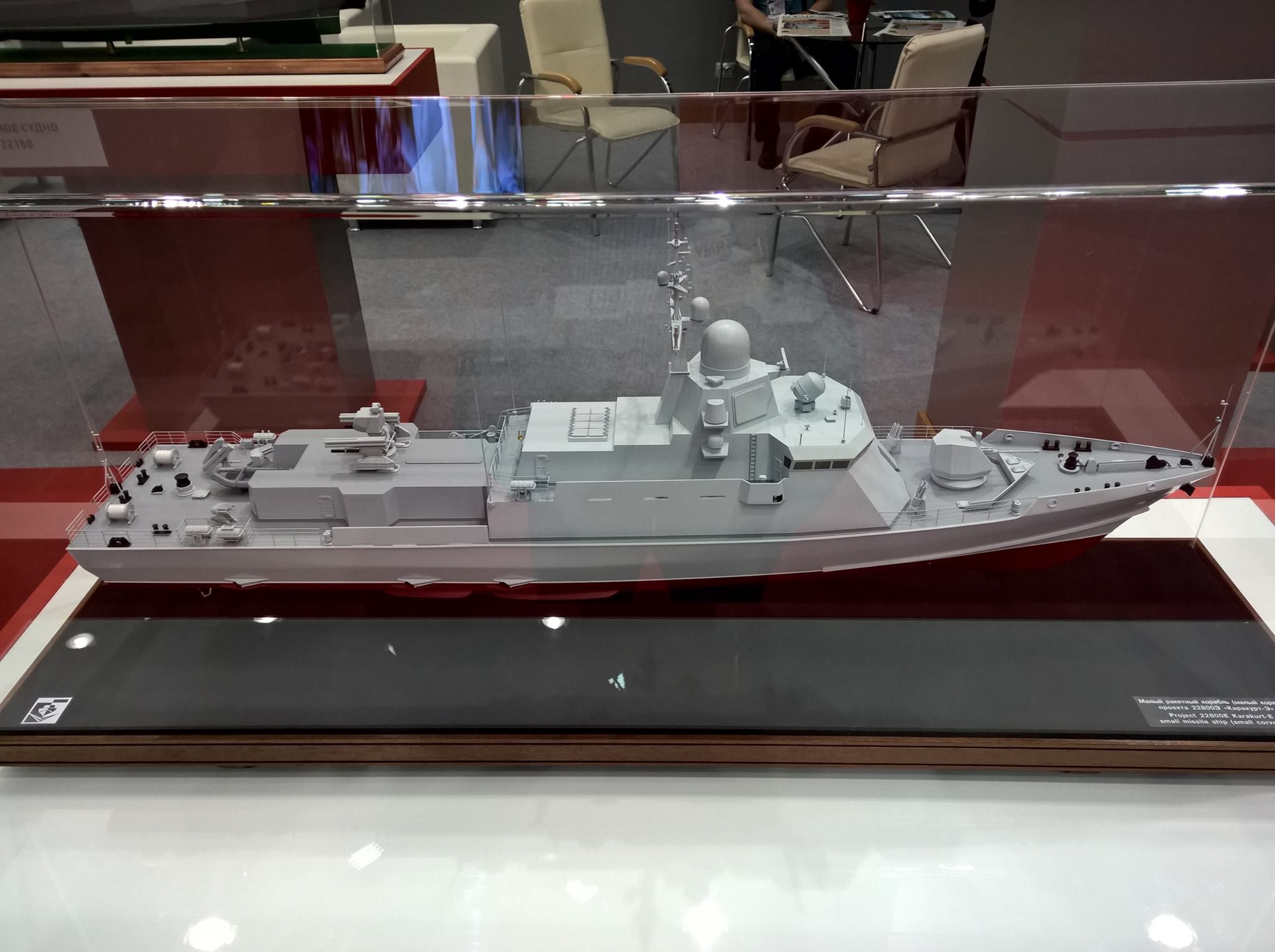 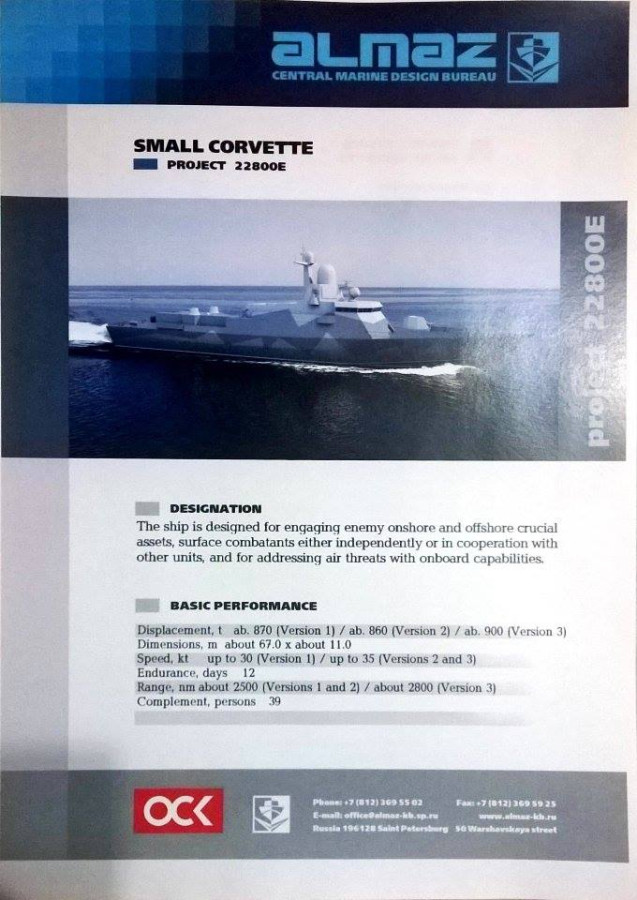 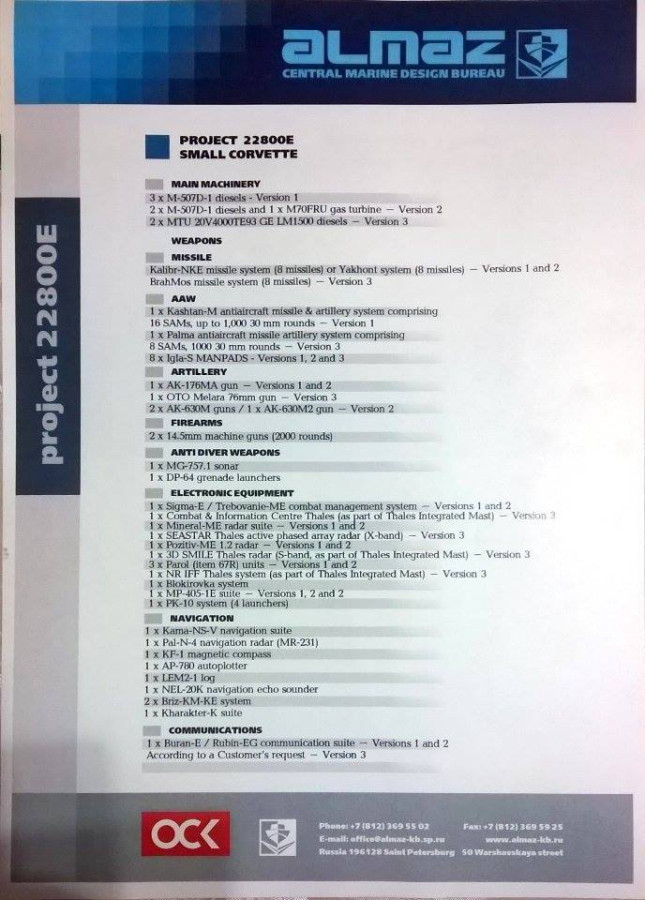 I'd say Ver 3 is pitched at India with OTO Melara 76mm & Brahmos.
Ver 2 seems closest to at least the initial domestic batch, though that is quoted with M70 turbine...

Not sure where the Mineral radar is supposed to go?
Pozitiv would be in the dome & the Front Dome is blocking it from being in the mast (though the specs don't seem to include Front Dome...) unless they don't mind restricted coverage via the radar panels on the cheeks of the mast?
franco

Shipyards have orders for 12 ships to date, expecting an order for another 7 by years end.

Here says that ordersof the Ministry of Defence on 19 small missile ships of the project 22800 have dramatically increased the demand for diesel-electric power plants of the St. Petersburg factory "Zvezda"

Lots of interesting details in that article.

But at current production rate they won't deliver the first engine until about the time the first ship is due to be handed over to the navy...
So they are planning to bump staff from 400 to 600, got new machinery on the way expecting to significantly speed up production.

Initially it was assumed that the ships will go only to the black sea fleet, but later it was decided to build them also for the Baltic and Pacific fleets.

Initially for BSF!
Everyone seemed pretty sure they were designed for North/Pacific...


In addition, according to "Kommersant", the project is undergoing modernization in tsmkb "Diamond", then "Karakurt" going to do a missile strike groups consisting of four to five ships.
"The essence of modernization is to replace the cruise missiles in the hull of a ship defense system.
Anti-aircraft missile and gun complex "Armor-M" will close the sky that will make some ships 22800 a full-fledged missile strike group, similar to carrier strike group the U.S. Navy.
For example, of five ships, three will be armed with cruise missiles, and two would protect them"

Says replacing the UKSK with AA but then only talks about naval Pantsir.
Everything previously (including the model) indicated naval Pantsir being intended simultaneous with UKSK so its quite confusing


Also: With another 3* Buyan-M ordered at Zelnodolsk I wonder if they will still be getting 22800 orders or if they are keeping with Buyan-Ms to avoid disrupting the successful line?
hoom

Over at Balancer forums they seem to be similarly confused about that wording whether they literally mean remove UKSK & add naval Pantsir or not literally add a Shtil-1/Redut launcher.
Bigger pic from the pamphlet image 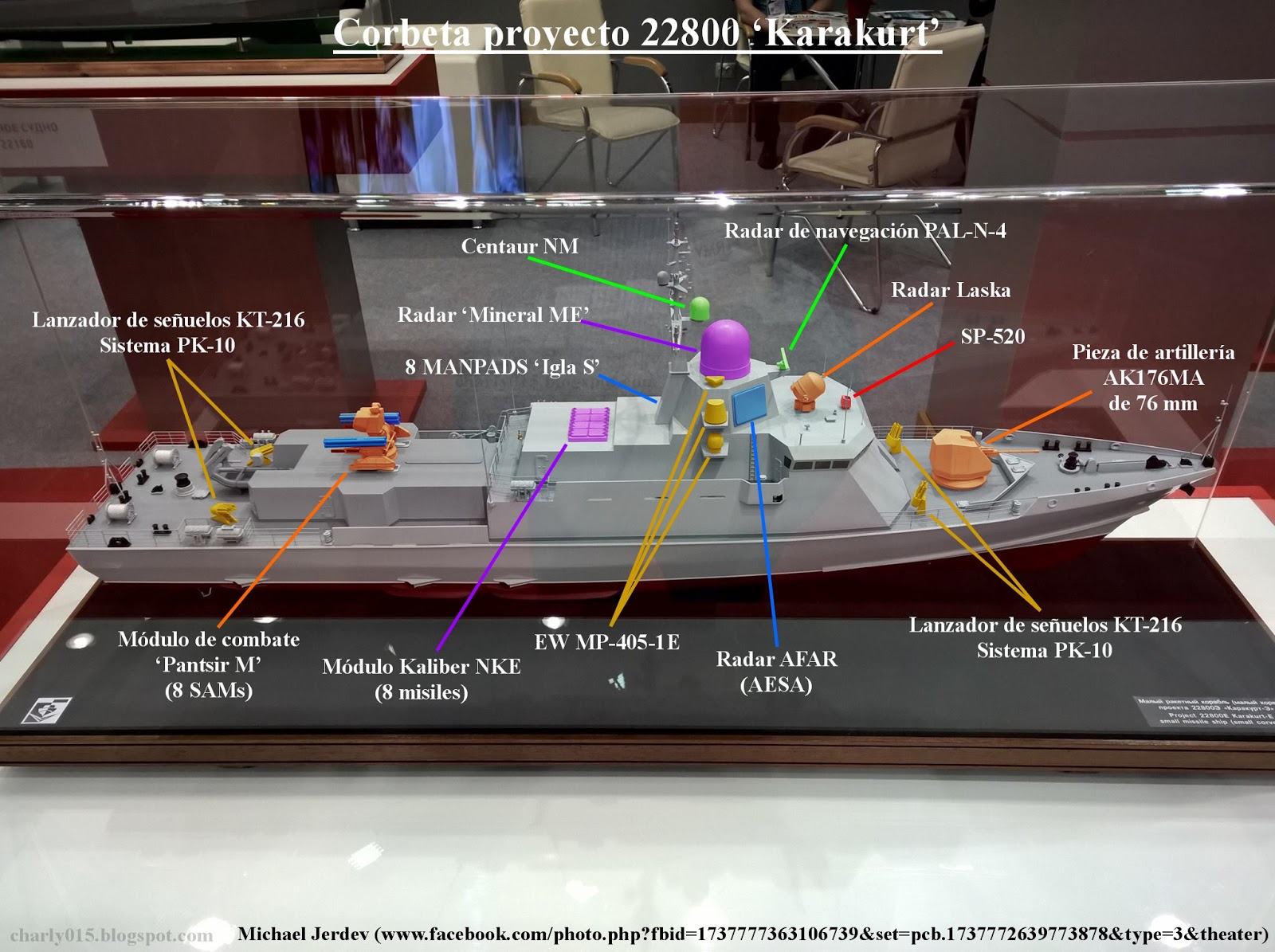 So he thinks the Mineral (anti ship) radar is in the dome.
Centaur is apparently a short range fire control radar related to the Flexible/Palma/AK-630 on various recent ships.
So the AESA panels on the mast would be air surveillance, which has the issue of only covering the front hemisphere

Guys would it be possible to slightly extend mid section to make room for Redut lunchers behind UKSK and fourth diesel engine to cope with extra weigh?
SeigSoloyvov

PapaDragon wrote:
Guys would it be possible to slightly extend mid section to make room for Redut lunchers behind UKSK and fourth diesel engine to cope with extra weigh?

Yes that would be possible why they would bother is another question do they really need Redut on this thing?.
hoom

Guys would it be possible to slightly extend mid section to make room for Redut lunchers behind UKSK and fourth diesel engine to cope with extra weigh?

It's an 800ton ship, only a bit over 1/3 of 20380...
Pretty sure getting proper AA missiles & radar in will be amazing even if they cut not just the UKSK but naval Pantsir & the main gun.
hoom

Apparently the Zelenodolsk 22800 build is still on

Google translate wrote:Construction of the first small missile ship (RTO) project 22800 "Karakurt" at the Zelenodolsk shipyard will begin this year, he told RIA Novosti on Friday, General Director Renat Mistahov.
...
we have completely bought materials, metal, being Counterparty work on procurement. Now there is an agreement with the Ministry of Defence regarding the order in which the date is better to lay. For certain body section will be formed this year

And hopefully they will have even more. Zelenodolsk is getting sh*t done. Pella too.

Once frigate engine issue is put to bed it would be good to get Pella and Zelenodolsk into the frigate construction game. Imagine several shipyards competing which could build most frigates in allotted timeframe.

That would be right approach.
hoom

Zelenodolsk is size limited by the river/canal so I'm pretty sure they can't do anything like a 11356.
Not yet proven that Pella can actually deliver a proper warship, they have a decent size auxiliary started recently but I've seen some questions about their build quality & suggestion they were proposing to build some larger ships in Germany...
TheArmenian

hoom wrote:Zelenodolsk is size limited by the river/canal so I'm pretty sure they can't do anything like a 11356.

Well thats about the same size as Gepard. I'm not sure how they managed to get the ones for Vietnam out...
But yeah, add 2* those in construction +2 expected to the list of work Zelenodolsk has.
SeigSoloyvov

hoom wrote:Zelenodolsk is size limited by the river/canal so I'm pretty sure they can't do anything like a 11356.
Not yet proven that Pella can actually deliver a proper warship, they have a decent size auxiliary started recently but I've seen some questions about their build quality & suggestion they were proposing to build some larger ships in Germany...

No way russia will have anyone mainly a NATO nation build a warship for them. Remember the French and Mistrals? most in russia even opposed that knowing it was a waste since the US would ensure they did not get the ships.

Why only sign up for a round two? of the samething.

Those appear to have been taken during the Shkvall keel laying ceremony.
Those & some more over at Balancers 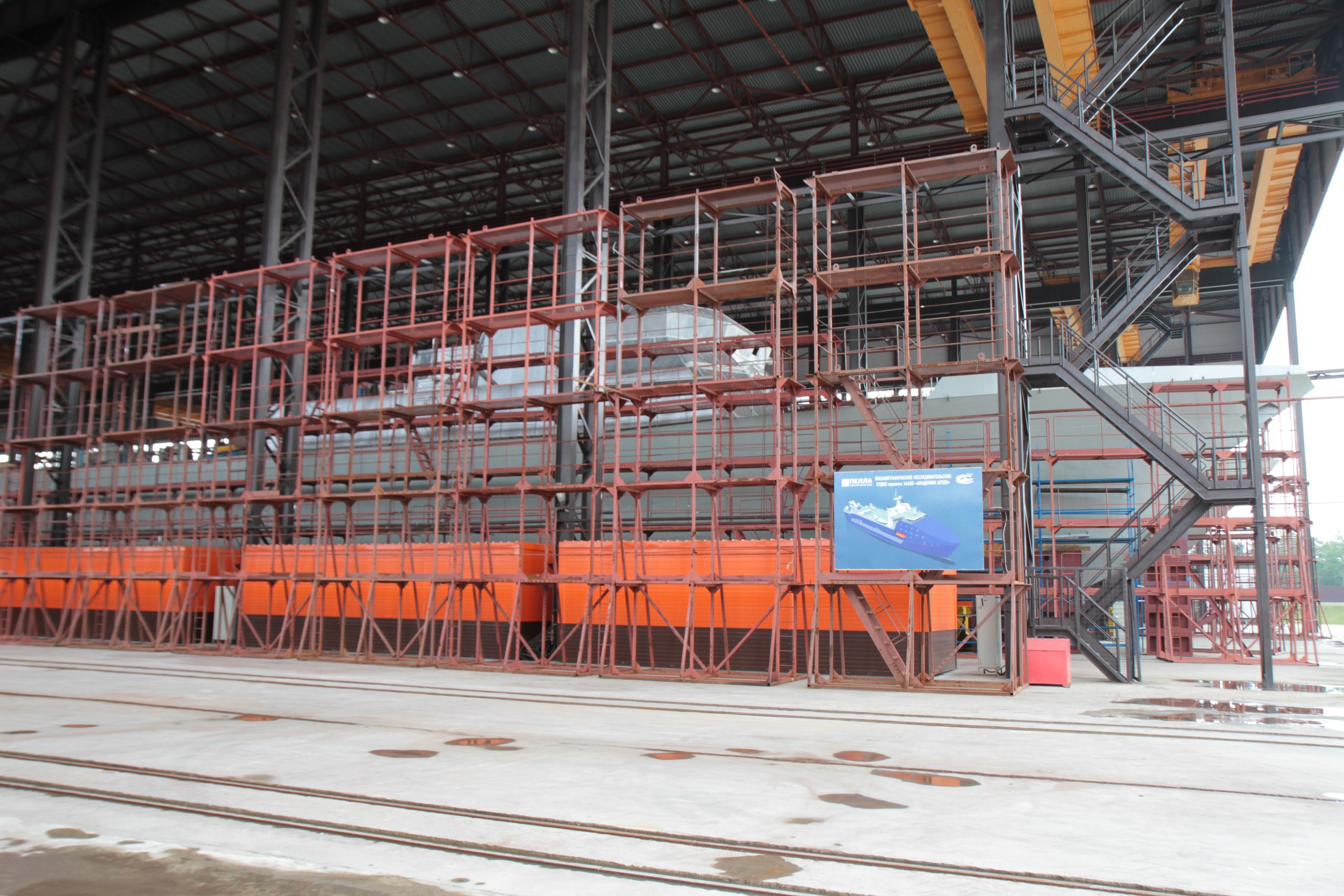 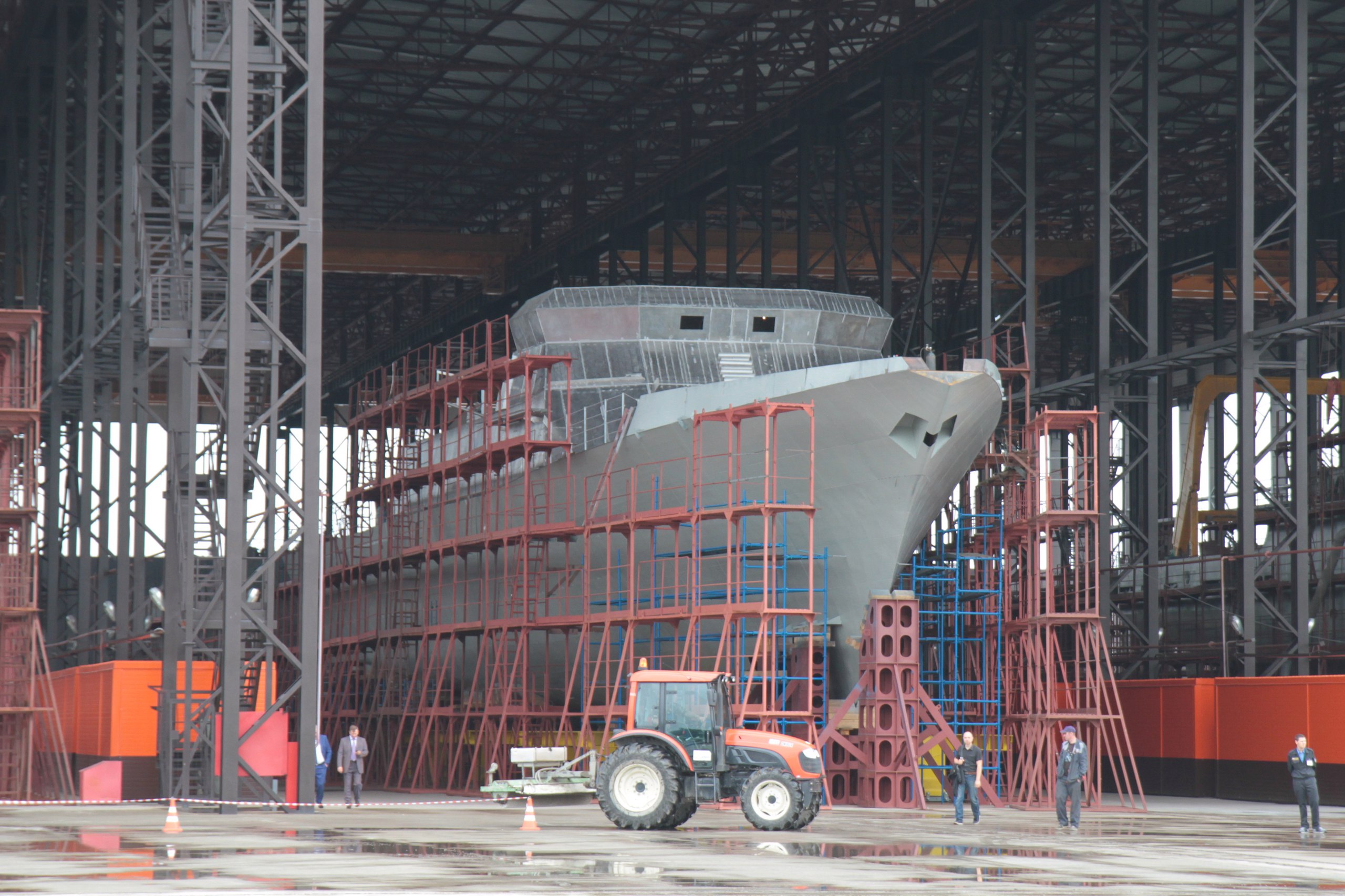