max steel wrote:I follow a financial blog where an australian keepa popping up with usa militart tech , weapons and  keep making iclaims how it is superior to russiand nd  chinese mismatched and stoved military tech . Thanks for informing mate . Just another bogus claim of his .

Ballistic in this means it follows a negative parabola shape. If you remember Algebra, then the equation is ax^2+bx+c.

The Iskander ascends straight up to around 60k feet, then goes straight towards its target with a final dive at the end. And it is not just terminal maneuvering, Iskander maneuvers through out the entire flight trajectory. It does not follow a classical ballistic shape. If you take a look at some images of the base, you will see the gas vectoring system. It is controlled through out the flight. Iskander is also the ONLY tactical and strategical strike missile that has its own jamming suite, it can also pull a 20-30g turn.

He is right in that the U.S. has a role equivalent. But saying that the ATACMS is anywhere close in performance to the Iskander is laughable, it is in a whole different league.
2SPOOKY4U

@GarryB, could you please move max steel's post as well as mine to the Iskander thread? or the general question thread, whatever you see fit. Thanks.

So it has a quasi ball path ?

Can you give more info on ATACMS system ? Thanx . Just post it on the Iskander thread i will follow from there .

It is nearly 1 am for me so I will add more to this post tomorrow, but here is a good video on the potential of Iskander to be able to carry self defensive emp systems.
You will have to look through the video a bit, but there is a lot of info.

Grrrr, can't find it, I know I gave it on my watch later list, but it is 219 videos total.

I promise I will get back to you first thing Max steel.

going to iskander to get married

max steel wrote:I follow a financial blog where an australian keeps popping up with usa military tech , weapons and  keep making claims how it is superior to russians nd  chinese mismatched and stoved military tech . Thanks for informing mate . Just another bogus claim of his .

Not at all he is smoking crack..

MGM-140 ATACMS missile are more at the level of Soviet Scuds but with GPS guidance..
Basically mini scuds artillery ,if you like to call it.. It should not be underestimated however
the range is 300km and even a rock falling by luck in your head will kill you. But they are fairly
simple american technology form the 80s ,so they were made to be used like artillery.. think in
ATACMS more like early smerch artillery like the one Ukraine have, with 3x times more range and added Gps guidance in the warhead. In wikipedia there is mention of the poor performance of the missiles in Afganistan.. it mixed its target by 1,000 meters aparently and ending landing in a civilian house. So AtACMS is more like basic super long range rocket artillery (300km) with GPS guidance in the warhead.

Latest versions of Russian OTR-21 Tochka can be even better than ATACMS for hammering enemy air defenses since aside of inertial guidance ,have passive radar in the warhead.and under ideal conditions can score a Direct Hit if you have a clean target .. ie.. without decoys traps and good inteligence on the ground. Ukraine ahve the early versions of Tochka that are very innacurate and they never hit anything with that.. its role in the entire conflict have been largely zero.. SInce always miss and end hitting empty places.. but like i said if they hit by luck something the explosive power is lethal. can damage 10 or more tanks.

Iskander missiles is an entirely different Beast.. those are more closer to ICBMS league. They can do violent 90 degree turns ,making it unpredictable and very difficult to intercept and have decoys , EMP active defenses , Glonass Satellite navigation ,and Optics sensors in the warhead. It is claimed to have an up to 5-7 meter precision.. and it have active defenses. ( a missile that counter other missiles trying to intercept it) So it is a real wonder. You can call it an intelligent near space orbit quasi ballistic missile ,guided by satellite and with optical terminal guidance . Is estimated is capable of 700km range ,breaking the treaties with US intermediate range.

ATACMS is useless for precision bombing. Iskander not. ATACM range is 300km .. Iskander-M official range is 500km. Iskander also could be used in combination with a cruise missile version.. In short Iskander is a very modern Next Generation Ballistic missile in service in 2006.
while ATACM was made in the mid 80s. ATACM is more in the level of early version of TOSCKA missiles that Ukraine army use but inferior to the latest versions that Russia have with passive radars.

George1 wrote:Russian Missile Operators Brought Up to Speed on Iskander-M

During the six-month course at a test range in the southern Astrakhan region the missile system operators will be learning the ins and outs of the advanced tactical ballistic missile complex to culminate in a real-life missile launch.

It is the second unit of the Russian Missile Forces to be armed with the Iskander-M complexes, military officials said.

The Iskander-M (also referred to as NATO's reporting name SS-26 Stone) is characterized by high mobility and maneuverability, as it takes just 20 minutes to place the system in operational readiness.

The system is capable of hitting targets at a distance of up to 500 kilometers, with a precision of around 30 centimeters.

It can hit troop concentrations or underground command centers, depending on the warheads placed on the rockets. If necessary, its missiles can also be armed with nuclear warheads.

The Iskander-M missile system has been used by the Russian military since 2006.

Only the second? Surely there are more than one Iskander unit operational right now? Second unit in the Eastern Military District perhaps?
max steel

Vann 7 I already came across your thread : http://www.russiadefence.net/t2939-comparison-of-smerch-vs-m270-atacms-accuracy

max steel wrote:Vann 7 I already came across your thread : http://www.russiadefence.net/t2939-comparison-of-smerch-vs-m270-atacms-accuracy

oh forgot about that..
The problem with ATACM will be precision and easy to intercept since it follows a simple predictable trajectory. you cannot ask much for a missile of the 80s.. So lets say
NATO give ATACM missiles to Ukraine ,with 300km range.. what Russia will do is deploy
patsir missiles or Buks to defend eastern ukraine from them. and Russia counter with Iskander.
aimed at kiev parliament.. to wipe the Fascist there..

So in short there is nothing that NATO can give ukraine ,that Russia cannot counter it with a better weapon.. and defend against it too. Perhaps a rail gun mounted in a warship,will be a nice one.. but no idea in what way it will help..since the rebels do not have airforce. or navy .For area damage Nothing beats artillery.. cheap ,efficient and cannot be intercepted effectively in mass attacks.

The thing that they could supply however is chemical weapons.. But if kiev use those ,will lose
the few support the had in Europe.
max steel

Raiguns . I saw US military testing it in the vide saying how chep and effective it can be . Never heard f Russian raiguns . Do they have any ?
sepheronx

Yes. An electromagnetic gun has been tested by soviet union. Dunno about Russia since they invested in building another A-60 instead (laser). But I imagine they are dabbling in electromagnetic guns again. Cheap? Maybe the gun itself but not the electricity needed to power it.
Werewolf

The projects for russian railguns is in development, but no idea about recent progress they are not open about it the only thing they present about their railgun progress is what they had in late80's to 90's.

Viktor wrote:Previously Iskander ban in relation to an unknown country has been cleared and is ready for export -

Would this be the first Iskander export?

Iran is the obvious guess; I believe it even stated its interest before - but it may be to China too.
max steel

Whoa !! Russia selling Iksander export dowgraded model . Israelis will be super pissed if Iran gets them . CHINA buyong quasi-ballistic iksander but it cant target usa cities with it . Chinese can place nuclear warheads onit . What about India ? They arent interested ?

max steel wrote:Whoa !! Russia selling Iksander export dowgraded model . Israelis will be super pissed if Iran gets them . CHINA buyong quasi-ballistic iksander but it cant target usa cities with it . Chinese can place nuclear warheads onit . What about India ? They arent interested ?

Iskander-Ms can't reach Israel from even western Iran. Not the export model anyway with an artificially downgraded range.

It's much more a threat to Saudi Arabia and the Gulf Monarchies.
The Saudis have been ruining relations with Russia in recent months, so this can't come at a better time.
cracker

so i've seen conflicting photos of 2 erected missiles and 1 centrally erected missle....... What's the real arrangement of the TEL iskander? it has 1 or 2 missiles aboard, and can it shoot them simultaneously, or, one shortly after the other? How about guiding both missiles, are they twins or separately guided to 2 different targets?

Realistically, are there any in-service iskander fitted with a nuclear head, or only HE variants?

The vehicle is amphibious? how protected is it? at least bullet-proof all around including glasses?

how many men and vehicle types and units does a iskander battery possess?

Let's say russia has in the end 150 TEL, it means there are only 150 or 300 missiles available or, are there like stockpiles of missiles to reload the TEL ? the total number of missiles can be as high as 1000?

ok i've read the topic and found the 1 missile TEL is rather the export variant and the russian army variant has 2 missiles.


i've got my answer for the composition of a iskander unit too.
George1


Major General Mikhail Matvievsky, chief of Strategic Missile Forces and the Artillery of the Russian Ground Forces, said earlier this month that a missile brigade redeployed to the Kaliningrad region would be equipped with Iskander-M complexes before 2018.
The Iskander-M (also referred to as NATO's reporting name SS-26 Stone) is characterized by high mobility and maneuverability, as it takes just 20 minutes to place the system in operational readiness.
The system is capable of hitting targets at a distance of up to 500 kilometers, with a precision of around 30 centimeters. It can hit adversary troops or underground command centers, depending on the warheads placed on the rockets.
The system can also fire high-precision R-500 cruise missiles.

Someone deserves a suspension for few days here .
George1 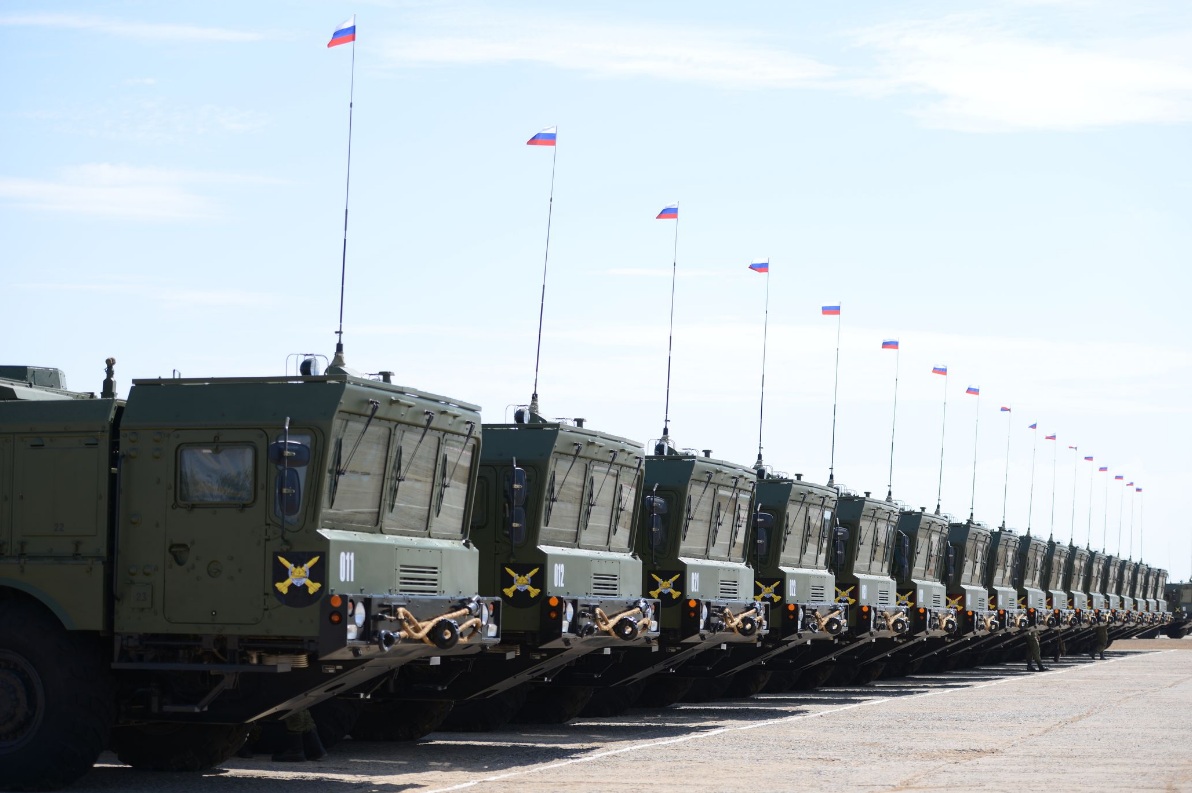 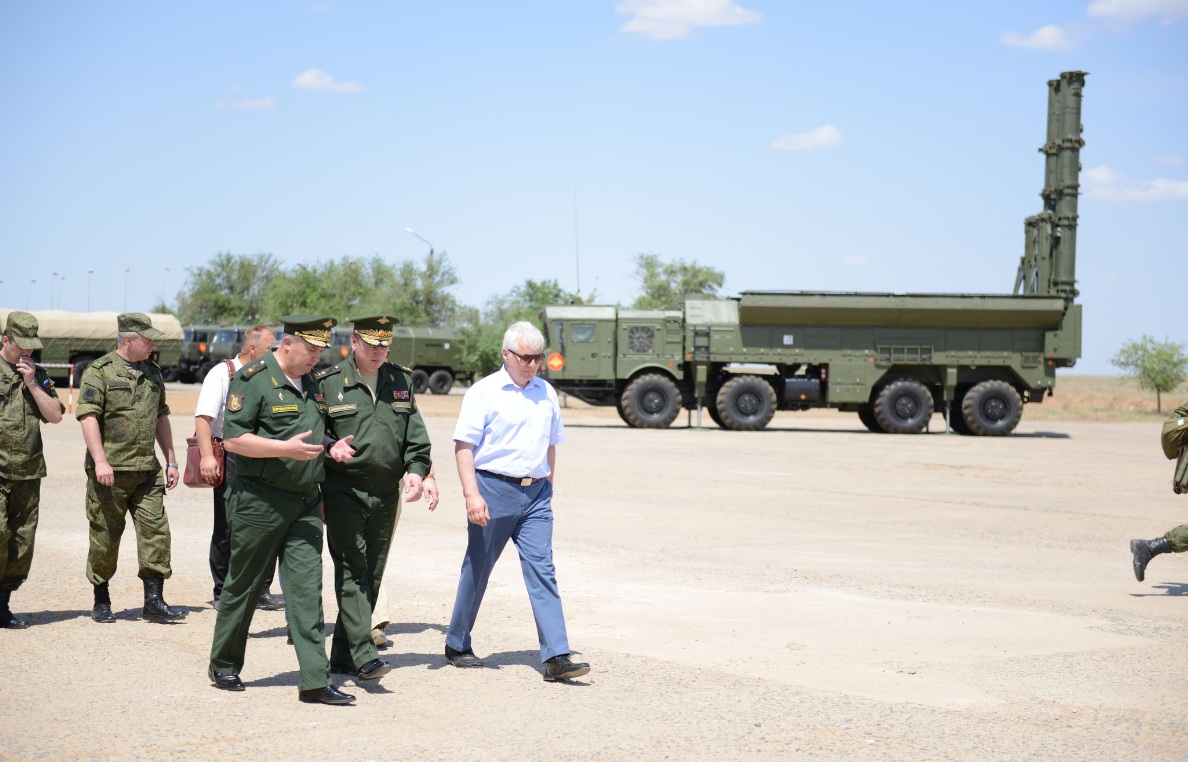 Can anyone update the number of Iskander units that have been delivered so far?
franco

Can anyone update the number of Iskander units that have been delivered so far?