i this maybe a little off previous topic, but was wanting peoples views on the Cuban armed forces.

like North Korea Cuba has been faced with long term sanctions preventing it from obtaining new equipment. Cuba has like North Korea made modifications to older equipment trying to make them better an to an extend they have succeeded to a certain extend but they just like North Korea are pretty much exhausted any further useful modifications. They now really need to buy equipment from Russia or any other country willing to supply them but with current embargo's and sanctions this doesn't seem likely. Cuban have produced there own sniper rifles such as the Mambi 14.5mm anti material rifle and Alejandro 7.62mm made by Union de Industrias Militares who also repair aircraft, armoured vehicles, and radars. Some modifications include the following:
BTR-60 armed with ZSU-23-2
BTR-60 armed with twin 37mm M1939 (61-K)
BTR-60 armed with BMP-1 turret
BTR-60 armed with T-55/54 turret 100mm gun.
BRDM-2 armed with 120-PM-43 mortar
SA-2 mounted on T-55/54 chassis
SA-3 mounted on T-55/54 chassis
M-46 130mm artillery mounted on 6x6 Kraz truck or T-34 chassis.
D-30 122mm mounted on BMP-1 chassis.
D-1 152 mm howitzer M1943 mounted on 6x6 truck.

to name a few i think they haven't done too bad considering the sanctions it makes sense to put SA-2 and SA-3 on a mobile chassis, as well as artillery guns to make them self propelled. I think the BRDM-2 with the 120mm mortar is also a good idea. As for the BTR-60 modifications i think anti aircraft guns is a good idea but are more suited for ground support. The BMP-1 turret on BTR-60 is a really good idea giving the BTR-60 some good fire power, but the adding the T-55 turret to the BTR-60 i have mixed feelings on this due the sheer weight of the turret, yes fire power for a wheeled APC is good (100mm gun) but with the added weight just how well does the vehicle operate in terms of speed, maybe they have uprated the engine i don't know. They also operate an anti tank BTR-60 armed with AT-3 sagger. Add to this they have P-15/styx mounted on 6x6 trucks, another good idea.
But as a whole the Cuban military is very aged and needs urgent modernisation. Mig-29M2, Yak-130, Mi-35, BM-30, BMP-3, T-72B3M, BTR-82A,
GAZ Tigr, S-300VM, TOR-M2, BUK-M2, Pantsir-S1, SA-24, Bastion-P anti shipping, and some modern ATGW, should do the trick.

New models of modernized armored vehicles were presented to the Chairman of the State Council of Cuba Raul Castro Ruz in the shops of the military industrial company Emilio Barsenas. In particular, Raul Castro inspected the wheeled tank "BTR-115" on the chassis of the BTR-60. As a basis for the complex of weapons of the new machine, a modified tower of the T-62 medium tank was chosen.

George1 wrote:New models of modernized armored vehicles were presented to the Chairman of the State Council of Cuba Raul Castro Ruz in the shops of the military industrial company Emilio Barsenas. In particular, Raul Castro inspected the wheeled tank "BTR-115" on the chassis of the BTR-60. As a basis for the complex of weapons of the new machine, a modified tower of the T-62 medium tank was chosen.

nice but its not really anything special they did the same with T-55 turret but I am concerned at the added weight and how the engine will cope with it. There was a Russian protoype made ,many many years ago using 85mm gun. And yet the concept died off its making a bit of a comeback as i would think bumerang might have 125mm gun turret version.

A new “signals intelligence” facility appearing in satellite imagery of Bejucal, Cuba, over recent months is capable of signal interception, ballistic missile monitoring and tracking objects in outer space, but analysts are puzzled about who provided the financing to build the facility.

Possibly the Chinese are behind this radar facility? 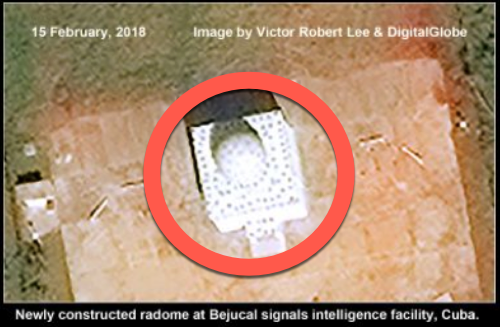 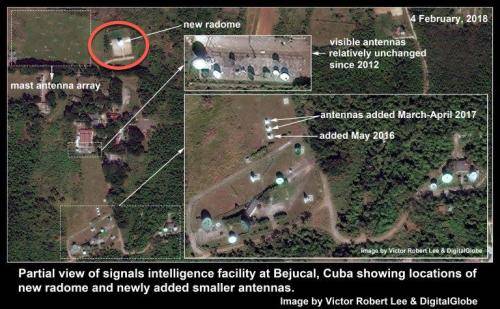 According to the newspaper Kommersant in the article by Alexandra Djordjevic "Cuba decided to equip. Russia will give her a loan for military shopping in Russia", Russia will provide Cuba with a state loan of more than $ 50 million, which will be used to purchase Russian military equipment. The signing will take place at the next meeting of the intergovernmental commission of the two countries, which will be held next week in Havana. The Russian delegation will be headed by Deputy Prime Minister Yury Borisov, who must sign an extensive package of agreements concerning not only military-technical cooperation, but also economic issues, as well as joint Russian-Cuban investment projects.

Two sets of agreements in the field of military-technical cooperation (MTC) told Kommersant that the 16th meeting of the Intergovernmental Commission on Trade, Economic, Scientific and Technical Cooperation will be signed. The events are scheduled for October 29-30, and Deputy Prime Minister Yuri Borisov will leave for Havana as co-chair of the Russian delegation (Deputy Chairman of the Council of Ministers of the Republic Ricardo Cabrisas Ruiz will represent the Cuban side). Mr. Borisov will be accompanied by a subgroup from the Federal Service for Military-Technical Cooperation, headed by Deputy Head of the Service Anatoly Punchuk. The FSMTC “Kommersant” confirmed the upcoming visit, but did not disclose the details. In the office of Mr. Borisov, it was said that in Havana it is planned to “approve the already agreed list of 60 investment projects”.

According to interlocutors of “Kommersant” in the industry, the administrative documents on the package of agreements in the sphere of military-technical cooperation have already been signed.

According to them, Russia will provide Cuba with a state loan in the amount of more than $ 50 million for the purchase of arms under a series of contracts. “This amount will go exclusively to the PTS. In addition to this agreement, a number of general economic documents and agreements through the Ministry of Finance will be signed, but other means will be used for them, ”a source in Kommersant familiar with the negotiations said.

According to Kommersant, Cuba will be able to choose weapons in the framework of the technical cooperation program for 2016–2020, which provides for the modernization of the republic’s military industry and its military equipment (in particular, previously delivered), as well as the so-called technological cooperation. According to one of the interlocutors of “Kommersant” in the field of the defense industry, the discussion will deal with purchases of armored vehicles and, possibly, aviation (presumably helicopters) from the presence of the Ministry of Defense of the Russian Federation. "In addition, they will take spare parts, tools and accessories, as well as property for previously supplied equipment, and serve, for example, the T-62 or BTR-60," said the source. Havana also plans to purchase industrial equipment under separate contracts on a commercial basis. A top manager of one of the defense industry enterprises said that a project on small arms could be one of the components of cooperation. It should be noted that in 2017, the head of Rosoboronexport, Alexander Mikheyev, reported that Cuba officially addressed Russia with a request to modernize existing equipment, but did not rule out concluding direct commercial contracts or carrying out work on credit in the near future.

Recall that the last credit agreement in the sphere of military-technical cooperation with Cuba is dated 2009, later it was twice extended - in 2010 and 2011. In 2015, Cuba was interested in supplying Russian naval equipment and upgrading the infrastructure of its coastal zone (piers, etc.). In 2016, Moscow and Havana negotiated the creation of additional capacities in the republic for repairing Soviet-built and Russian-made helicopters. Mr. Punchuk then clarified that it was a question of repairing and servicing Mi-type helicopters, stressing that Cuba could not afford the purchase of new helicopter technology.

That 14.5mm AMR rifle is interesting... the fact that standard ammo would not be accurate enough suggests that brand new ammo developed especially for it would make sense... yet looking at the image shown it appears to have a rather small scope attached that does not seem to be optimised for long range shooting.

Therefore I would assume the choice of the 14.5mm round is for penetration performance... so if you are going to make a custom designed round for it... and it is not for long range use, then I would presume max penetration and so therefore APDS round might be the standard round.

Certainly the round is enormously powerful and has a lot of potential in an AMR rifle, yet I think a 23x115mm might have a few more advantages if an APFSDS round is developed for it... it would have rather more capacity for a much bigger HE round, and yet in terms of high velocity armour piercing it should have more potential too.

Of course even just with standard ammo the 14.5mm is almost twice as powerful as any 12.7mm calibre weapon so it would be interesting...
ATLASCUB

About time. Cubans were hurting bad for some Mi-17s/Mi-8s...like really bad. The new president will be going to Russia soon as a proper presidential state visit.

They're never going back to the golden 70s...those were the times they could actually project military power...at the USSR expense but still, so does Israel till today at America's expense. Some allies in key regions are always costly.... at least you can't say they backstabbed Russia, unlike 90% of the socialist block, specially Russia's "slavic brothers".
GarryB

Got to agree... they almost hurt themselves in their desperate dash from hiding under the Soviet Apron to Uncle sams lap... hard to respect such entities... of course I do understand it was the elite of the countries realising the freeloading was over with the Soviets and that there was a huge open wallet in the west...

Of course it is no coincidence that most of those purse dogs look like big rats...

I am sure Cuba and Russia can have a more healthy relationship with mutual trade... and I am sure Russia would appreciate the opportunity to house hackers and troll farms right next to the US... the proximity wont actually make any difference at all but it will drive the yanks crazy....