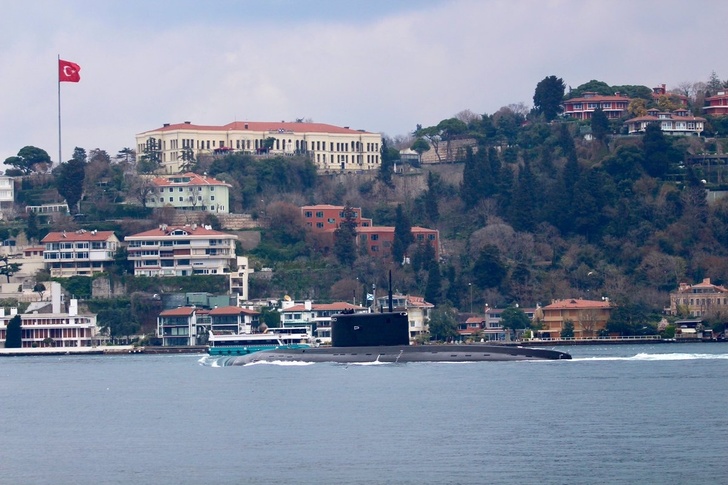 Destroyers Admiral Tributs and Admiral Vinogradov left Vladivostok for traditional Russo-Chinese drills "Joint sea 2019". Varyag will be joining them later alongside Admiral Gorshkov. The size of Russian delegation seems to be constant over the last 7 years (cruiser and 3 destroyers/frigates), the new thing however is that one of the ships doesn't come from Pacific fleet. Deployment of Northern fleet ship in the Pacific is an exceptional thing. It shows Russian desire for blue water power projection. The limitations of their capability in given theaters are to be mitigated with more flexibility, such as interfleet deployments. This confirms also official purpose of the drills, that is global peace and regional stability.

Another interesting implication is that the only destroyer class deployed will be class 1155 Fregat, as in the past previous 8 Joint sea drills since 2012. Absence of more aggressive class 956 Sarich with land-attack capability signals their defensive posture in the Pacific region. Russia is for now happy with the status of observer of naval Sino-US competition in the region. 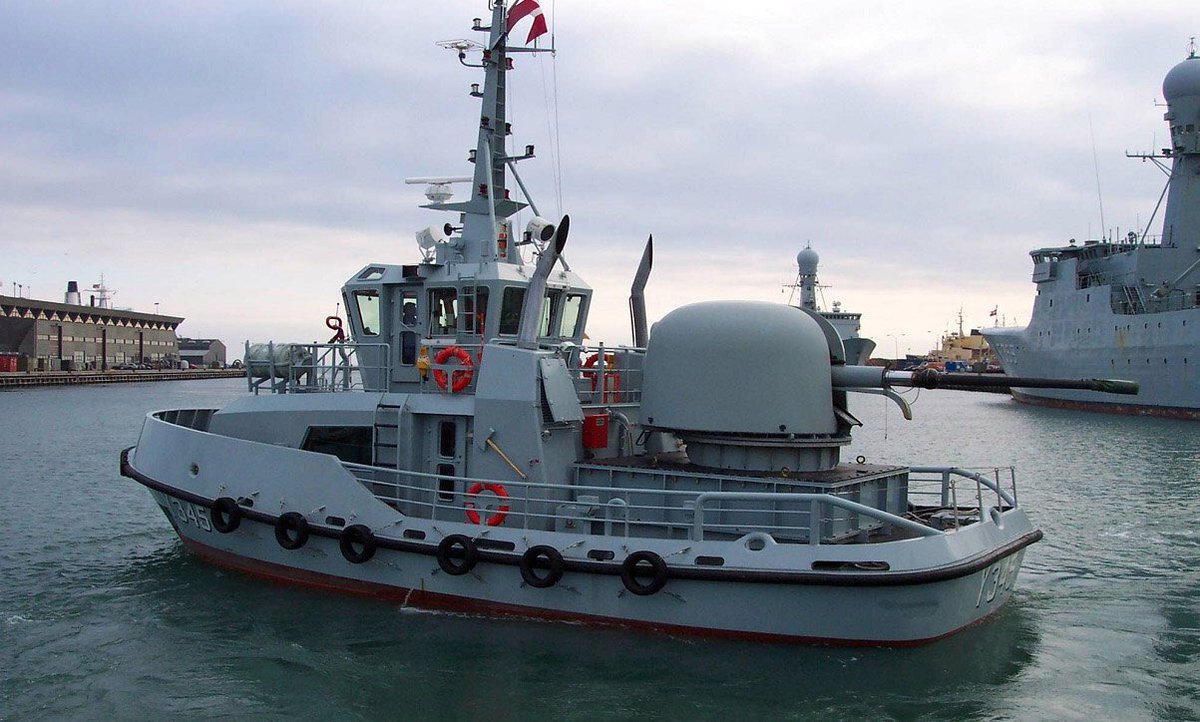 Can´t be Russian. Gun is to small.

My dear friends and followers,
Congratulations on April Fools` day! ????May good jokes and sincere smiles fill this day and bring more positive emotions into your life! ????Remember that laughter is the best medicine!???????? pic.twitter.com/pMGA5XC1Zx

Some more details about Joint sea exercises are now published.

They will include joint maneuvering, organization of communications and practice of rocket and artillery firing to engage sea and air targets. Coastal, maritime and air force branches will participate.

Russian and Chinese admirals had a meeting last week, organizing the course of the exercises. Not a Russian or Soviet gun turret... looks more Italian...

They will include joint maneuvering, organization of communications and practice of rocket and artillery firing to engage sea and air targets. Coastal, maritime and air force branches will participate.

Russian and Chinese admirals had a meeting last week, organizing the course of the exercises.

What language do they use?
Tsavo Lion

Russian, as it's easier for Chinese to learn it than for Russians to learn Chinese. They probably have liaison translators as well.
verkhoturye51

Probably not english, as indicated. Chinese are good speakers of foreign languages. Older generations or people who live near Russian border can speak Russian, so this could be it. Russian grammar can be more complicated than Chinese, but the language generally is much much much easier to learn than some other Slavic languages.

Some more details regarding the exercises.


Beijing-based naval expert Li Jie told the Global Times that it is very possible the drills will be held right after the parade...Li expects five to six [Rusian] naval vessels to participate in the joint exercises, and at least two in the Chinese parade.

Not a Russian or Soviet gun turret... looks more Italian...

it should look Italian because it is  Italian "A series of Project 636.3 submarines for the Pacific Fleet will operate more advanced life support and radio-technical systems," the Defense Ministry quoted the Navy chief as saying.
This has been achieved thanks to the Navy Main Command’s constant and close interaction in the sphere of conventional submarine-building with the United Shipbuilding Corporation, the Rubin Central Design Bureau and the Admiralty Shipyard, Korolyov stressed.

The series of Project 636.3 conventional submarines will be delivered to the Pacific Fleet by 2025. The construction of this series is set to be completed in 2022 while the subs’ trials will take the next three years, the Navy chief said.

The first Project 636.3 submarine Petropavlovsk-Kamchatsky was floated out for Russia’s Pacific Fleet at the Admiralty Shipyard in St. Petersburg on March 28.

As Admiralty Shipyard CEO Alexander Buzakov said earlier, all the Project 636.3 submarines will be built by 2022.

The Project 636.3 (‘Varshavyanka’) is referred to the third generation of diesel-electric submarines. The submarines of this type have been designed by the Rubin Central Design Bureau. They develop a speed of up to 20 knots, have sea endurance of 45 days and a crew of 52 men. They can dive to a depth of about 300 meters. The submarines of this class displace over 2,000 tonnes in their surface position and about 4,000 tonnes under the water. Varshavyanka-class subs are armed with Kalibr cruise missiles.

Project 636 submarines are considered to be the most noiseless among Russian conventional subs. They have been dubbed the ‘Black Hole’ for their unique quietness. They are also furnished with modern radar and communications systems, sonars and 533mm torpedoes.

From "Varshavyanka" to "Kalina": which non-nuclear submarines will increase the combat power of the Russian Navy

There were two thematic issues on the agenda.

The Minister of Defense recalled that in April last year, the Ministry of Defense concluded a state contract with the Zvezdochka Center for the repair of technical readiness and modernization of the ship.

At the moment, work is carried out in accordance with the master plan schedule.

Technical readiness of the cruiser is 25%.

Its repair and modernization is expected to be completed by the end of 2020.

Sergei Shoigu proposed to discuss the course of work on the ship.

The second issue was related to equipping military facilities with technical security equipment.

The Minister of Defense noted that they are currently installed on more than 16,000 objects.

“Complexes of technical means allow ensuring the security and anti-terrorist protection of military units, as well as create conditions for reducing the separation of personnel from combat training,” said Sergey Shoigu.

The participants of the selector examined how the equipment is being equipped with modern security systems.

Next, the Minister of Defense drew attention to a number of upcoming significant events.

At the same time, the Northern Shipyard will dock large blocks of the corvette of the project 20386.

It will receive its name in honor of the military brig of the Russian fleet “Mercury”, whose feat in May will be 190 years old.

In the Russian-Turkish war, he defeated two enemy battleships of superior size and weaponry.

The Minister of Defense expressed confidence that the revival of the name of the heroic brig will serve to preserve the glorious pages of the history of the Navy.

“These ships are planned to be added to the Navy until 2025. They will significantly strengthen the ship's shock groups of the far sea zone, ”said Sergey Shoigu.

From the side of bmpd, we point out that, according to rumors circulating on the web resource forums.airbase.ru, two new frigates of the project 22350 will be named "Admiral Amelko" and "Admiral Chichagov."

It has the contours providing the minimum hydrodynamic resistance

SAINT-PETERSBURG, April 11. / Tass /. The hull of a surface warfare ship with high rates of propulsion was developed, tested and patented by experts of the Krylov State Research Center.

“Scientists and specialists of the military shipbuilding department of our center have created a unique hull of a surface combat ship of the ocean zone. This hull has contours providing minimal hydrodynamic resistance and high speed of the ship,” said Valery Polyakov, advisor to the center’s general director.

"The correctness of the choice of the hull shape of the hull, reducing the resistance to movement of the ship by 25-30%, has been tested in the center's experimental basin during numerous tests of models and patented," he added.

According to the representative of the center, the innovative corps of the combat ship provides a real opportunity to accommodate a greater number of universal vertical launchers, up to 150-200% of the standard ammunition for ships in the far sea and ocean zones, anti-ship, anti-submarine and anti-ship weapons.

"Today, the US Navy and the leading Western countries have no analogs of such a hull, which allows the Russian Navy to build highly efficient warships in the ocean zone, superior to all modern and future surface ships of foreign fleets in their characteristics and composition" - stressed Polyakov.

Amazing! That level of improvement of the hull's efficiency is in line with what they claimed for the multihull carrier. The increased internal volume would of course allow to increase the weapons load without increasing the displacement or the drag. Should be implemented already with 22350M if possible
verkhoturye51

The largest ever - today's sea denial exercises of the Northern fleet. Is Barents bastion expanding into the Norwegian sea?! More: 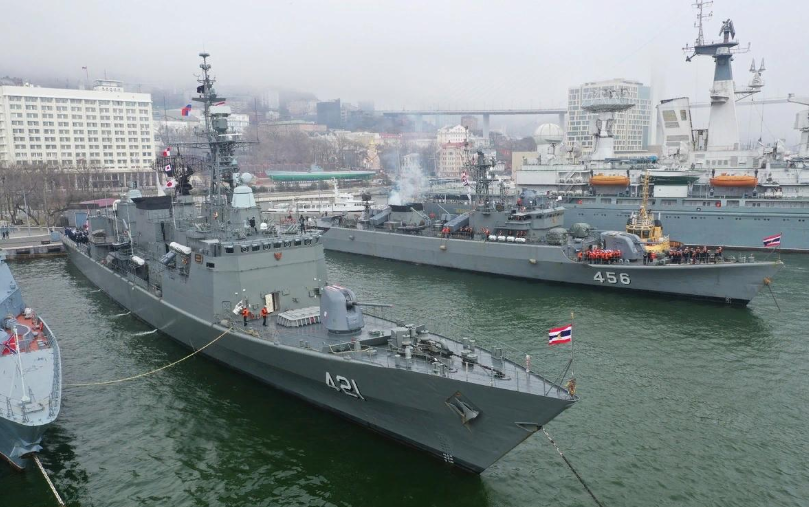 The antenna on the research ship on the right is huge when compared to the thai frigate next to it.

If they could use it horizontaly and powered by the nuclear reactor at 10 or 15 MW like an engagement radar maybe it could just burn f-35 from 200km away.
Hole

The radar is under the radome, the thing between it and the funnel is a "Quad Leaf" comm device. 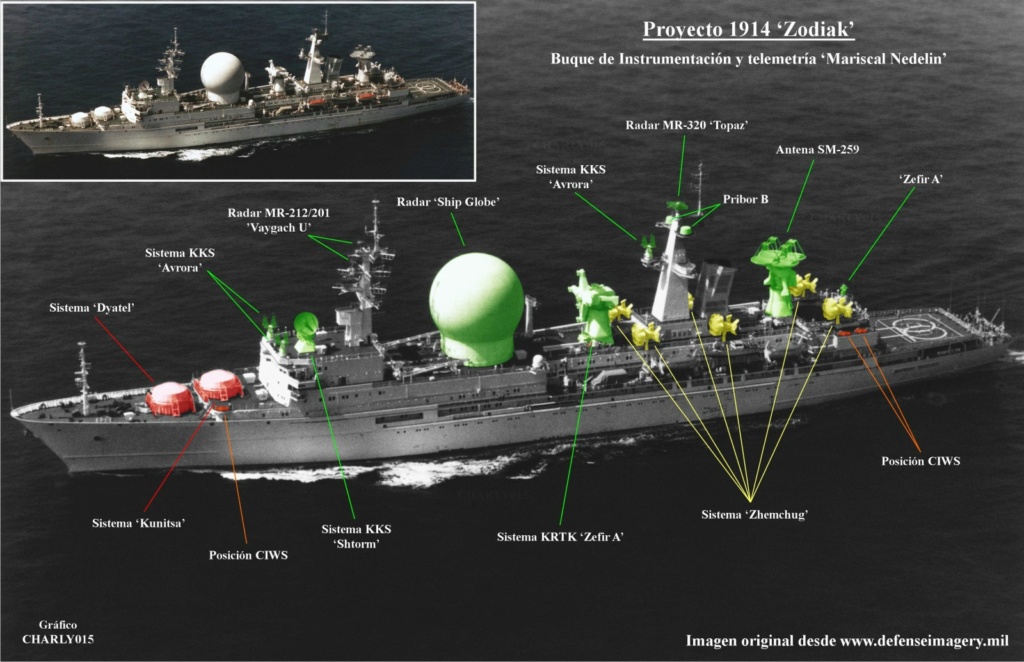 And the ship is powered by gas turbines.
Isos

Isn't it a kirov modified class with nuclear engines ?

An antenna is an antenna. You can use this one for radar application too or as a directed energy weapon antenna for my idea.
LMFS

dino00 wrote:Russia to build 1st helicopter carrier based on Ivan Gren warship by 2024

It seems quite strange, it may be a mistake by TASS
dino00

Six legendary ships and submarines will be scrapped instead of upgraded

Several sources in the military department told Izvestia about an unexpected decision. Recycling plan to complete before the end of 2021. The most sensational will be the destruction of two heavy nuclear missile cruisers "Admiral Ushakov" and "Admiral Lazarev" project 1144 "Orlan". In addition to them, four nuclear submarines will be cut into scrap: K-448 “Daniel of Moscow”, K-221 “Petropavlovsk-Kamchatsky”, K-433 “St. George the Victorious” and K-232 “Podolsk”, a source in the Main Command of the Navy said. Disposal will cost 2.7 billion rubles.

"Eagle" - the legend of the Navy. They are considered the largest in the world after aircraft carriers. These are the only ships in the Russian fleet with a nuclear power plant. Their range is almost unlimited. Cruisers can operate in harsh climatic conditions, including in the Arctic region.

For the Navy of the USSR and Russia, four nuclear-powered cruisers of the Orlan type were built: Admiral Ushakov (originally, Kirov), Admiral Lazarev, Admiral Nakhimov and Peter the Great. The series was built for a long time - from 1973 to 1996. Three ships strengthened the Northern Fleet, and the latter, the Admiral Lazarev, hit the Pacific. Now only one ship of this project is listed in the ranks - Peter the Great.

Projects on re-equipment of the Orlans have been discussed for a long time, but the money was allocated only under the state program of armaments for 2011–2020.

The End of the Black Prince
Three submarines of the Kalmar 667 BDR, a strategic missile submarine cruiser carrying 16 R-29R intercontinental liquid-propellant rockets and torpedoes, will be allowed into recycling. For many years the boats were the basis of the marine component of the country's nuclear triad. Light body "Squid" has a characteristic hump behind the fence of the cabin, closing the rocket mines, exceeding in its dimensions durable body. The fleet will remain two project submarines - K-44 Ryazan and BS-129 Orenburg.

The K-448 “Daniil Moskovsky” submarine of Project 671 “Pike” was the main multipurpose submarine of the Navy in the 1980–1990s with torpedo armament. In the fleet of the project boat were considered successful for their quietness, performance characteristics and reliability - for all the time of operation they have not had a single accident. In the NATO countries, nuclear-powered icebreakers have been nicknamed the “Black Prince” for their elegant hull lines.

With all this recent news about the Navy it looks like they made up their minds about what they want.
Sponsored content