Looks like the idiots are stating again how HIV will drastically increase in Russia by 250% and such due to funding. LOL. What a bunch of dolts.
kvs

Looks like the idiots are stating again how HIV will drastically increase in Russia by 250% and such due to funding. LOL. What a bunch of dolts.

Looks like the idiots are stating again how HIV will drastically increase in Russia by 250% and such due to funding. LOL.  What a bunch of dolts. 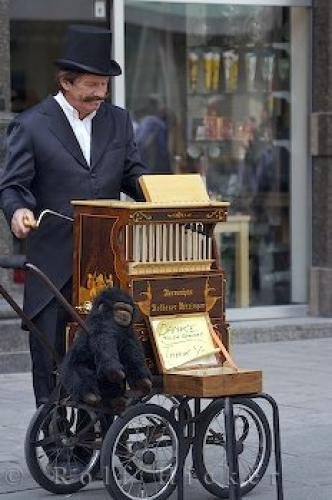 It's the same note from the same one note Johny clowns over and over.

Veronika Skvortsova is grubbing for money.

I figured to start a new thread regarding about the aids/hiv issue that plagues Russia. Vice news did a coverage:
https://news.vice.com/article/russias-aids-epidemic-reaches-crisis-levels

Of course they quote Vadim Pokrovsky whom is notorious for his claims. He claimed there are now 1 million hiv/aids patients in Russia. Although, I have not actually seen any official numbers. Have any of you? He also claims at least 30-40% are transmitted through heterosexual couples. Issue is, apparently that is nearly impossible:
http://www.catie.ca/en/pif/summer-2012/putting-number-it-risk-exposure-hiv#footnote4_iw9afqr

So essentially, he could be flat out lying.

Some claim this is simply a case to obtain funding since there isn't official data. Plus, Russia is treating 30% of current victims of the disease that is claimed. Also, with new drugs, newborns from aids/hiv parents shown to have no case of the strains with the new drugs.

What is your guys views on this? Load of bs? Well, since majority who have it are drug addicts, I just do not feel sorry as these people where simply losers and none contributors anyway.

Just a note: all claims on Russian AIDS and HIV cases all comes to 1 man - Vadim. All news sites quotes him. But we have not received any official data or even other independent data. Just him.
whir

Lol, stereotypes and denial only worsens things for everyone.
Werewolf

Vice news is a branch of Fox News. Why use such a "source"?
sepheronx

No one is denying the issue outright, but there is a major lack of backed up data. In other words, all claims (99% so far) are from 1 guy, whom also happens to be a Russian liberal. Usually, if they want to be take. Seriously, they should submit the data. What people in Russia seem to be saying though is that majority of those who contract it are drug addicts. And this isn't pot or coke, but heroine or any other drug taken via a needle. So clearly people are sharing needles. I met my fare share (in British Columbia where most drug addicts here live) and seen majority of these users are far gone to help and do not contribute to society other than in Crime and or abusing our medical care system. Some people end up ok and decent citizens after being "cured".

As I pointed out, hiv/aids are extremely difficult to obtain via sex than from drug use, so it is predominantly claimed to be BS that it spreads via that way in the extremes that this guy claims. It isn't possible to be caused because the couples are drug addicts as well.

Many in Russia think best method of dealing with it is conservative teachings, which is correct. Handing out needles and pumping drug addicts with synthetic heroine won't solve the drug issue in the end, it may even increase it.
sepheronx

Werewolf wrote:Vice news is a branch of Fox News. Why use such a "source"?

Because all other sources use the exact same guy. Just type into Google Russia aids, and they all quo5e same guy. Even Vice. What made vice good for me was the comments section where a couple of users called out the claims of what Vadim claims.
Project Canada

Strange, i wonder why there are no "official" data on the number of aids cases in Russia? We cant say the government is ignoring the issue given the number of government funded research for the development of vaccines against aids (from what i read)
sepheronx

There are 3 vaccines currently in circulation in Russia and another one testing with high success (kids born from parents hiv/aids are most likely not to contract it. Success rate is 98%). The issue seems to stem directly from drug abuse. The talk of obtaining it from sex is usually bullshit unless there are obvious open sores on the guy or girl or guy and guy. According to some posters on the vice article there is a shit ton of misinformation regarding about aids, especially in Africa.

There needs to be another independent research done on this issue in Russia. It isn't a secret there is a drug abuse issue in Russia, so it isn't out of the realm possibility there is a high number of hiv/aids patients. But this is purely due to poor life style/choices. If contracted due to a mishap or due to someone purposely giving it, then they need help and those need to be concentrated on. Currently, over 200,000 people in Russia are undergoing treatment (upwards to 300,000) for aids/hiv. So yes, it isn't being ignored. But many view that due to these other peoples poor life choices, that they shouldn't be helped or cared for. But issue with that, is these very same people can spread it to innocent people. That is the problem.
kvs

The test for all these ludicrous claims is how realistic are their numbers. They were predicting doom and gloom back around 2000.
Yet they are still trotting out the same numbers today. That proves the claims are nonsense. If the HIV infection rates were
so high, they would have afflicted tens of millions in Russia by now.

When these clowns present an actual case, then maybe they will deserve the time of day. I have not see anything from them.
For example, they can hold a press conference and tell us that the infection rate was so and so in 2000 and 2005 and that
they predicted some growth and here we are in 2016 and the growth figures have confirmed their worst fears. Or something similar.
Nope. We just get opaque hysteria.
kvs

BTW, go to Google and do a search for "russia official HIV numbers". You will get a spew of the same story from all the usual
anti-Russian propaganda outfits:

Looks like an organized propaganda assault to me. But the problem is that Russia has a 5th column outfit doing the official
number counting! This clown is the head of the Federal AIDS Research Center of Russia and a "longtime critic of the Kremlin". Gee. We recently saw
how WADA used the word of another 5th column clown to smear the whole of Russian sport and to make the claim that Russia
runs a "state doping program". Well, Vadim Pokrovsky is a similar specimen who is safe and secure in the knowledge that he
has many millions of dollars and a house waiting for him in the USA if he chooses to denounce "Putin's regime".

Here is a piece on Pokrovsky's BS:

Vadim Pokrovsky, head of the federal Aids centre in Moscow, predicted this month that at least two million Russians are likely to be officially registered as HIV-positive within five years, and a total of three million will have the virus.

We’re talking about one-to-two million infected now, and in 2005, we could be talking about five-million being infected, and these are realistic, even conservative figures.

The same shyster with the same shtick. 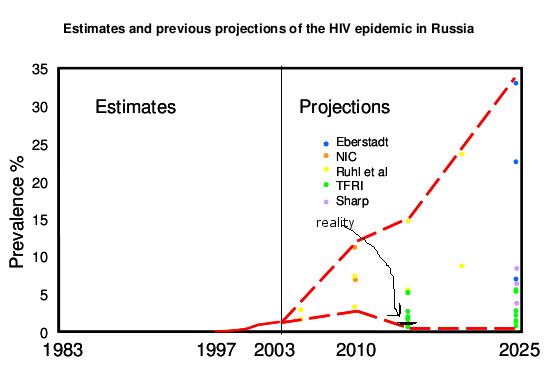 There is no indication of any explosion and the data is actually tracking the equilibrium model where the infection rate
is 0.5% of the population in the long term. This is based on current conditions in Russia and will likely change for the
better in the future of heroin use is reduced.
George1

Almost every 50th citizen in the city of Ekaterinburg in Russia’s Ural region has been infected with the HIV virus, a health official said, noting that the situation has already reached epidemic proportions.
“Almost every 50th resident of Ekaterinburg is infected with HIV,” Tatiana Savinova, the first deputy head of the city’s health department, said during a press conference, adding that outbreaks are considered an epidemic when the infection rate reaches 1 percent – a threshold that has already been surpassed in Ekaterinburg.

The city of 1.5 million people “has reached a generalized stage of the infection,” she said, as cited by TASS. “For us doctors, the HIV epidemic has already started," since so many people are sick in Ekaterinburg. But this did not happen yesterday, she said, while noting that the epidemic has not been announced officially.

The Sverdlovsk region where Ekaterinburg is located tops the list of Russian regions afflicted by HIV. In the first nine months of 2016, the HIV infection rate there stood at 118.2 per 100,000 people.

On the other hand, the Sverdlovsk region also has more people tested for HIV – over 23 percent of the population – while in other regions only 15 people are generally tested, according to Savinova.

The infection is ‘getting older,’ with many people infected now 30-49 years old – and not all are from society’s marginal layer.

“These are not drug addicts or homeless people; they are socially prosperous people. A mass infection took place in the 1990s, when prostitution and drug addiction were wide spread,” Savinova said.

“Ekaterinburg’s health authorities have registered some 26,693 cases of HIV,” the city’s mayor, Evgeny Roizman, said, as cited by RIA Novosti. That amounts 1,826 cases per 100,000 people, or 1.8 percent of the city’s population.

Earlier, in an interview with Ura.ru news portal, Savinova said that the majority of those infected receive antiretroviral drugs, but this is still not enough, and the HIV epidemic is spreading.

“If [the Russian authorities] don’t take action in the next five years, the situation could become absolutely deplorable,” Savinova said.

Russia is still infested with 5th column slime inside the government system. The official organization that is supposed to track AIDS in Russia
has been a major source of hysterical misinformation. The same director clown makes ludicrous predictions about infection rates and then
when they don't pan out, just repeats them again (i.e. keeps on kicking the can down the road).

There are some things to consider here. HIV spread is a long term process. So the mess of the 1990s is bearing its fruit today and will do so
in the future. There is pretty much nothing the current government can do about other than round up every infected individual and qurantine them
for life. That ain't gonna happen.

I find the numbers cited to be highly dubious. Unless there was some deliberate sabotage: spreading HIV through the blood supply used by
hospitals. I would not be surprised if that was the case.
TheArmenian

"Every 50th resident of Ural City"

So, this is only about one city out of the whole of Russia.
Skandalwitwe

Situation with spread of HIV is serious (esp. in some oblasts of Ural and Siberian Federal Districts) but an apocalypse won't happen. Russia is executing a very high number  of HIV tests every year (too lazy to reserch now but 20+ million for sure). Whole groups like preg women, members of security services and many more are tested vigorously.

Here the last post from Nov 2014 which sums up every topic on Russia's demographics:

And here a revealing image (also 2 years old, numbers improved since then even further) on 'unnatural' causes of death highly connected to the desaster of the late Gorbachev/whole Yeltsin era: OK I posted this article before in order to put this AIDS doom thing to bed (no pun intended) but since people have short memory here it goes again:


Countrary to what western media believes and would have you believe prevalence of HIV in Russia is:

So can we move on (again) please?
Sponsored content