Thought the Navy had rejected them

... alas guess not when the owner of the Shipyard is also the country president

Well...looks like something Serbian river flotilla would have good use of
George1

Prospective plans for the development of the Ukrainian Navy 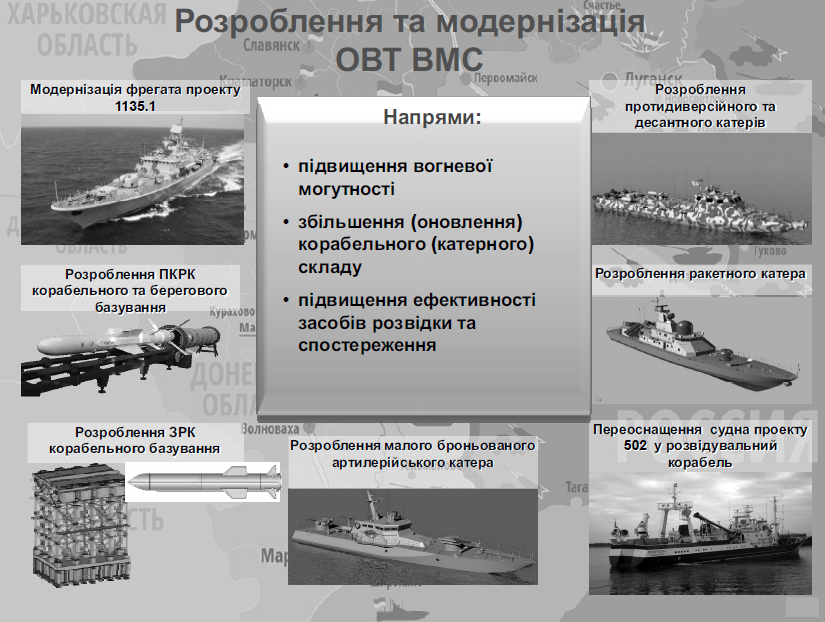 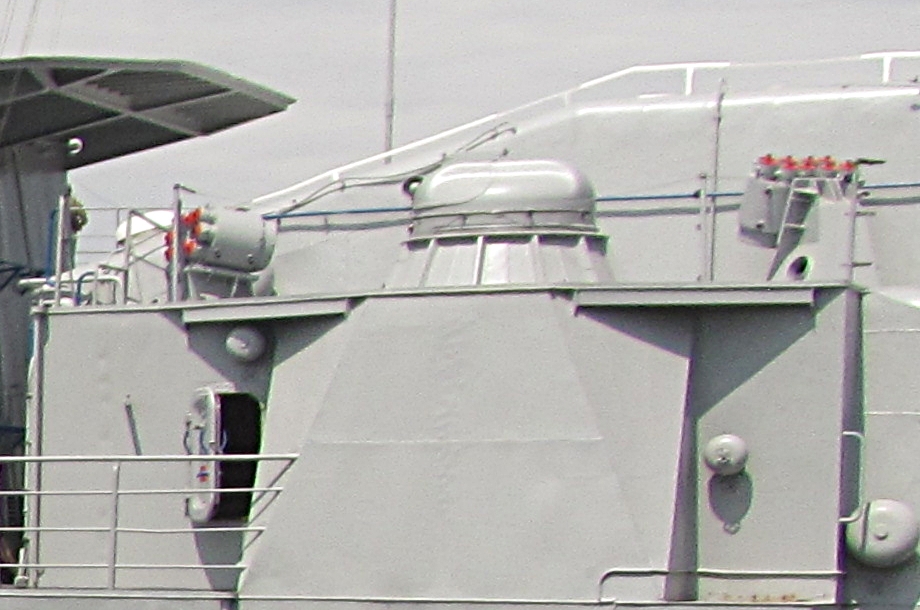 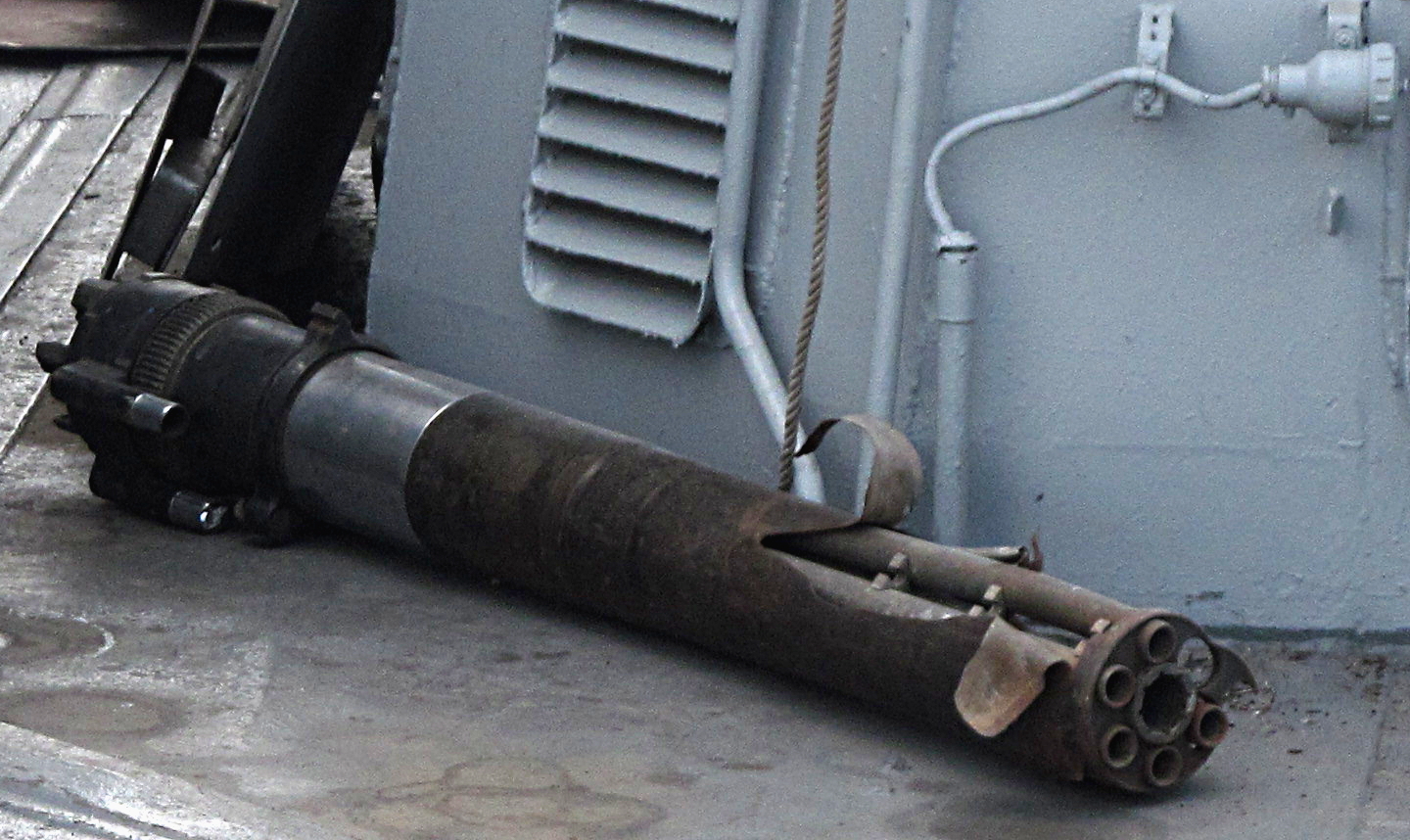 That's barely a coast guard. They don't even have a proper Naval Base anymore.
They should do what they Georgians did after Russians trashed their Navy, abolish it and unify everything under Coast Guard command.
Benya

This is what happens if you fire the gun brainlessly until it cooks off.

That's barely a coast guard. They don't even have a proper Naval Base anymore.
They should do what they Georgians did after Russians trashed their Navy, abolish it and unify everything under Coast Guard command.

Well, I might speak too soon, but I think that it's only a matter of time and Ukraine will become landlocked, nullifying the need for a blue-water navy

check out these traitors back in the early 90s:

Why do I think they got some nice $$$ to switch sides?

As Vladimir Trendafilovski writes in the article "Ukranian Mi-14 overhaul problem solved" in the August issue of the magazine "Air Forces Monthly", a partial solution to the problem of repairing sea-borne helicopters and aircraft of Ukrainian aviation was decided by attraction of the State Enterprise "Konotop aircraft repair plant" Aviakon ". This plant specializes in the repair of Mi-8 and Mi-24 helicopters, but has now completed the repair of the anti-submarine Mi-14PL helicopter and is currently working on a second helicopter of the same type. 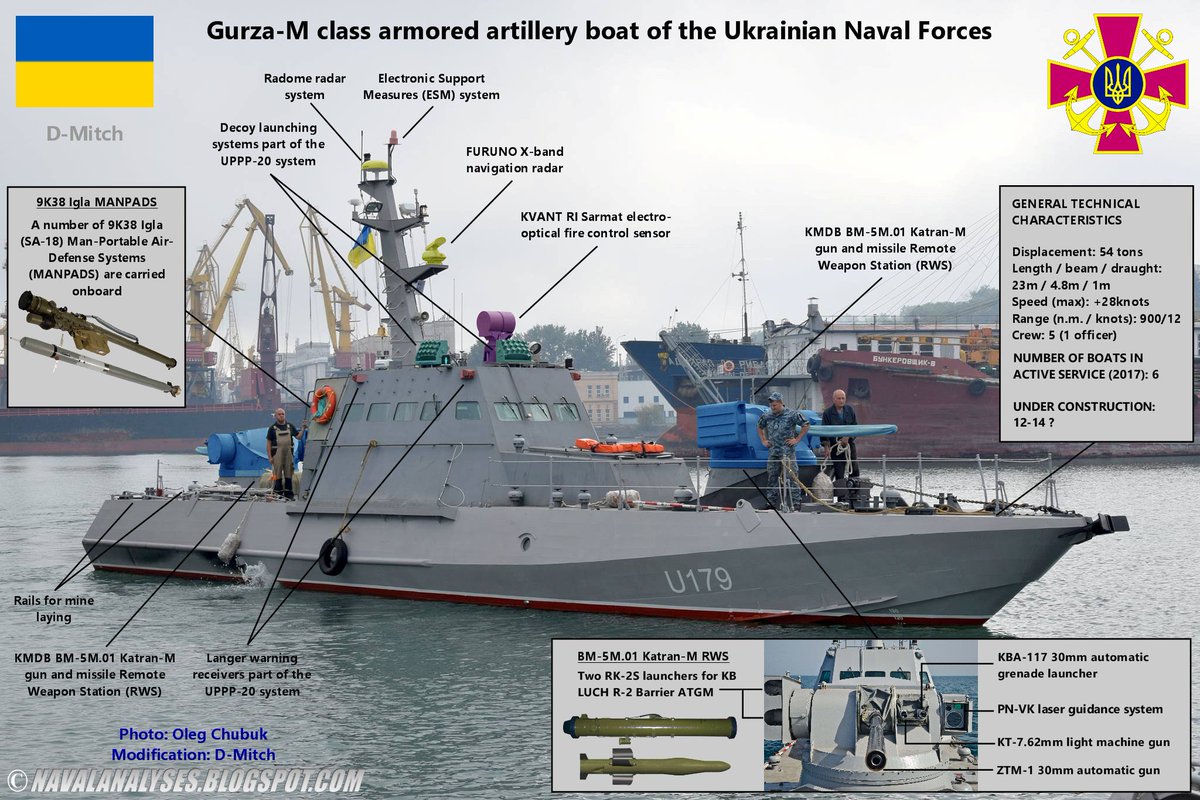 As reported by Ukrainian resources, the Ukrainian Navy transferred, as claimed, to the "standard NATO" (more precisely, the British) system of airborne numbers (Ренant number - "pennant number"). Instead of the former unique Ukrainian system of shipboard numbers with the common prefix "U", introduced by the Ukrainian Navy immediately after the formation in 1992, the British system of airborne numbers with prefixes corresponding to the class of the ship ("A" - auxiliary vessels, "F" - frigates and corvettes, "P" - patrol ships and boats, "M" - mine-warships, "L" - amphibious ships and boats, etc.). For the first time new board numbers on the ships of the Ukrainian Navy were noticed during the solemn events held on April 29, 2018 in Odessa on the occasion of the 100th anniversary of the raising of Ukrainian flags on the ships of the Black Sea Fleet and the Sevastopol fortress.

US will give Ukraine two decommissioned cutters of the CG
https://russian.rt.com/ussr/article/558186-katera-ukraina-spisannye

But will they put them in a museum like the Humvees from Georgia, or will they just scuttle them like the US would have if nobody else wanted them?
Tsavo Lion

Or disarm & action them off to the highest bidder. They may also be useful as dive boats. Border Guards on the Caspian & elsewhere could also use them.
Tsavo Lion

Kiev is trying to draw Moscow into a naval battle
Russia can deny Ukraine & NATO future access to Azov Sea -the mentioned canals can be "closed for drenching", r not in the international strait & the Azov basin will be de-facto an internal Russian sea even if Kiev annuls the treaty.
https://thesaker.is/ukraine-v-russia-passage-through-kerch-strait-and-the-sea-of-azov/

Kiev controls less than 1/2 of its coastline: 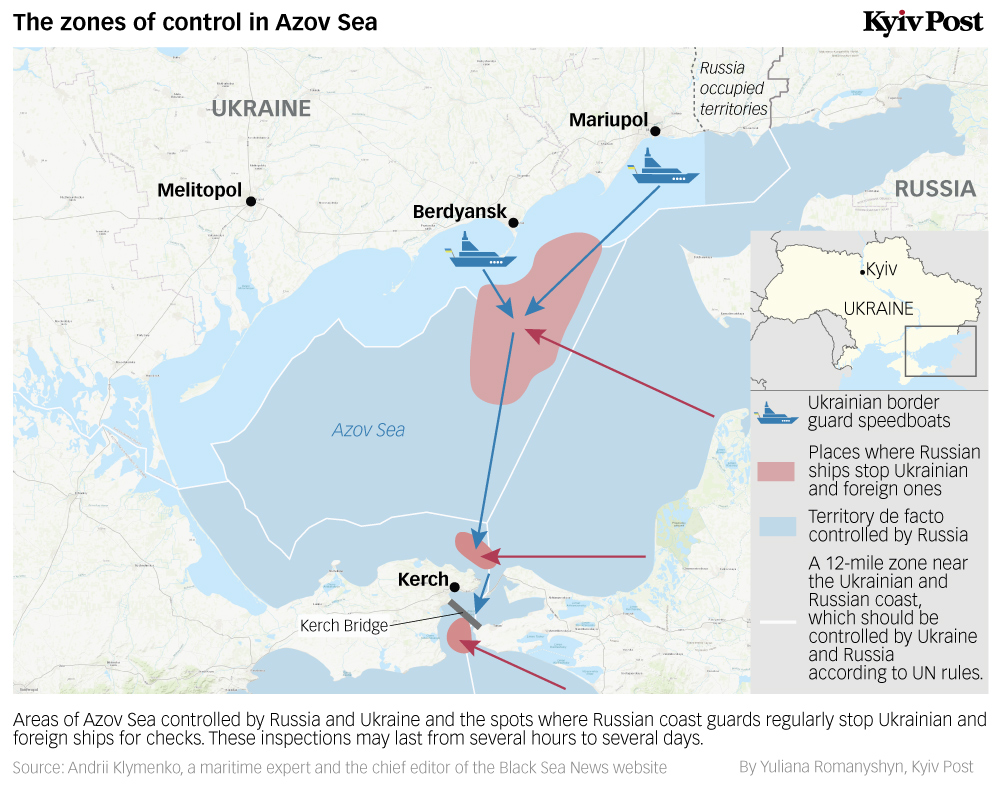 The United States may give Ukraine two frigates for her Navy
https://en.wikipedia.org/wiki/Oliver_Hazard_Perry-class_frigate

They may send sailors to train on this Polish ship:
https://en.wikipedia.org/wiki/ORP_Genera%C5%82_Tadeusz_Ko%C5%9Bciuszko

Russia warns Sea of Azov off limits to US, NATO ship drills

Russian Foreign Minister Sergei Lavrov said a bilateral treaty with Ukraine prohibits military drills in the area around Azov without a green light from Moscow.
“Now Ukraine wants to hold NATO drills in the Sea of Azov but it will be impossible to go there because our treaty with Ukraine requires mutual consent for the passage of warships into the Sea of Azov,” Lavrov told French media on Thursday. “But they want this and they are being actively goaded into this.”

Why "Oliver Hazard Perry" will finish off the Ukrainian Navy
Time will tell! They too may end up under St. Andrew flag!
NATO-Azov: a new seat?
https://regnum.ru/news/polit/2512283.html

Ukraine stuffs the Sea of ​​Azov with patrol ships
This moskit fleet will be sunk/captured by the Russian boats & aviation if they keep up their provocations.
Tsavo Lion

According to the Ukrainian State Concern Ukroboronprom, during the May 24, 2019 State Test Site of the Armed Forces of Ukraine "Alibei" in the Odessa region, test sites of the anti-ship missile complex RK-360MT "Neptun" launched in Ukraine, equipped with a homing head. There are no reliable confirmations of the presence of a homing head on the tested rocket, and, as can be judged, the launch of the rocket, as in the test launch on April 5, 2019, was carried out along a predetermined path, without targeting a real target. 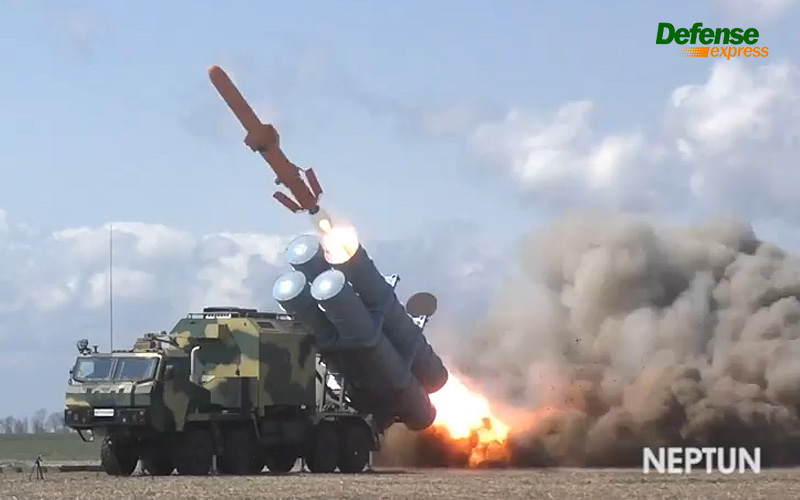 
The Minister of Defense of Ukraine Stepan Poltorak addressed a proposal to President Vladimir Zelensky to partially dismantle the Ukraine-launched missile cruiser at Nikolayevsky Shipbuilding Plant.

“He (the cruiser) is now in such a state that the weapons and equipment are unsuitable for use ... Tasks assigned to this cruiser: escorting air strikes over long distances. There are no such tasks in Ukraine, therefore we consider it inappropriate to use it as a cruiser and we propose to consider the possibility of demilitarizing it, ”Poltorak said to Zelensky, reports Today .

The head of the defense department added that the existing equipment of the cruiser can also be used as parts for ships that are in service. Poltorak told the president that he needed to bring the issue of the demilitarization of the vessel to a government meeting.

The Ukraine-launched missile cruiser was launched back in 1992, but the vessel remained to stand on the territory of the Nikolaev Shipbuilding Plant. Construction of the ship for many years was frozen at the 95% stage of readiness. It was planned to complete construction in 1994.

The cruiser was supposed to be equipped with the C-300F “Fort” medium-range anti-aircraft missile system, the estimated cruising speed was 32 knots, the cruising range was over 7 thousand nautical miles, and the crew had to be 500 people.


In December 2017, the Ministry of Defense of Ukraine  stated that it was not advisable to finish building the cruiser “Ukraine” for the country's armed forces. In 2018, the Rada statedthat in the situation with the missile cruiser “Ukraine” there is “no positive way out”, and the Ukrainian armed forces “cannot afford a ship of such a significant class”.

As the newspaper VIEW, in recent years at the Nikolayev shipyard instead of production of modern military equipment have mastered theproduction of stoves, stoves for APU.

Newspaper VIEW studied why the industry of Ukraine, including the shipbuilding industry, turned into ruins.

President of Ukraine Zelensky on the unfinished rocket cruiser "Ukraine" 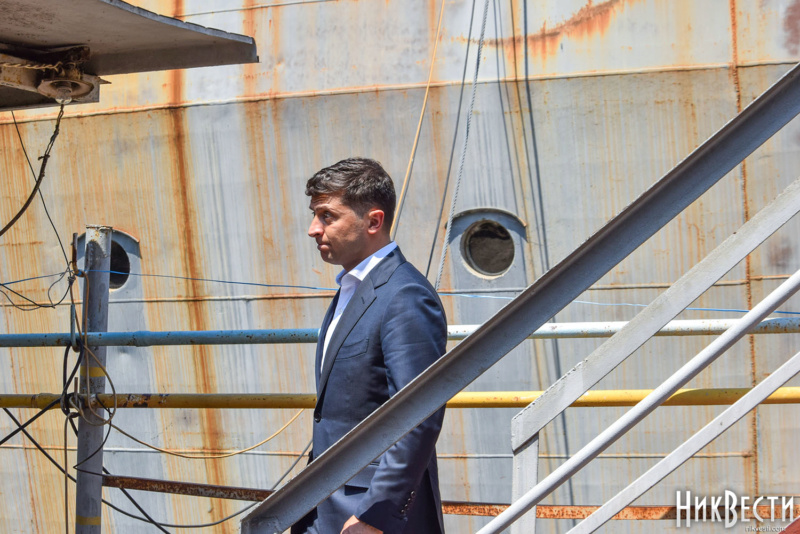 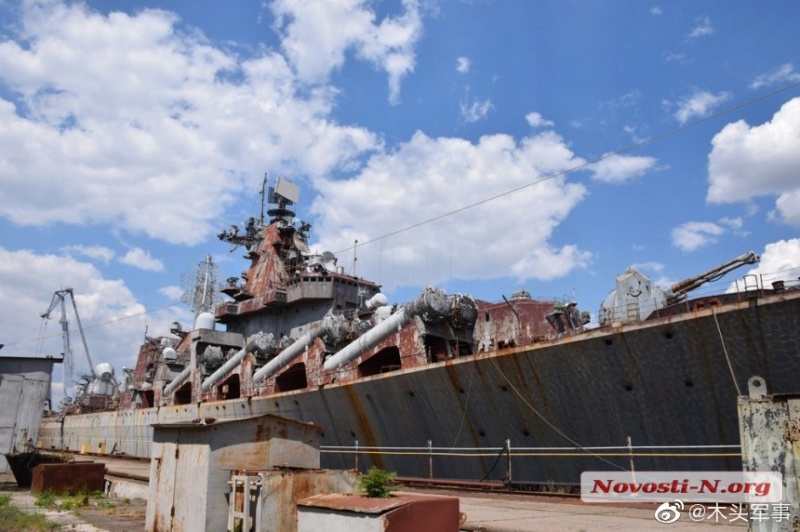 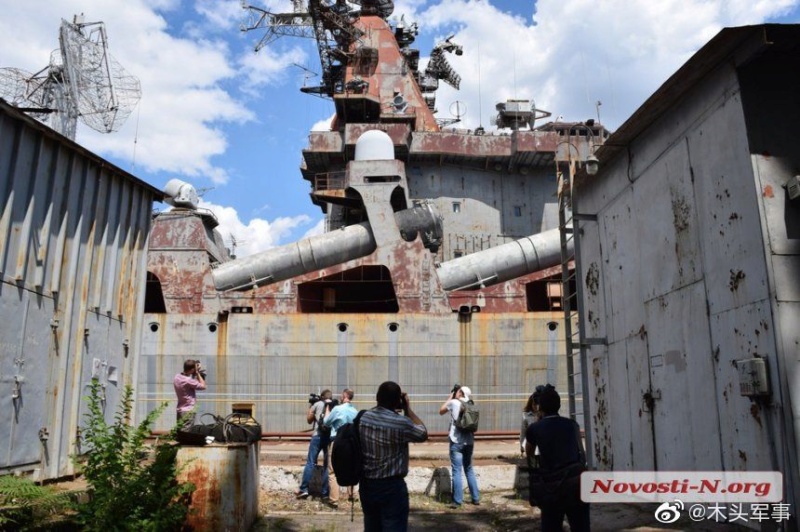 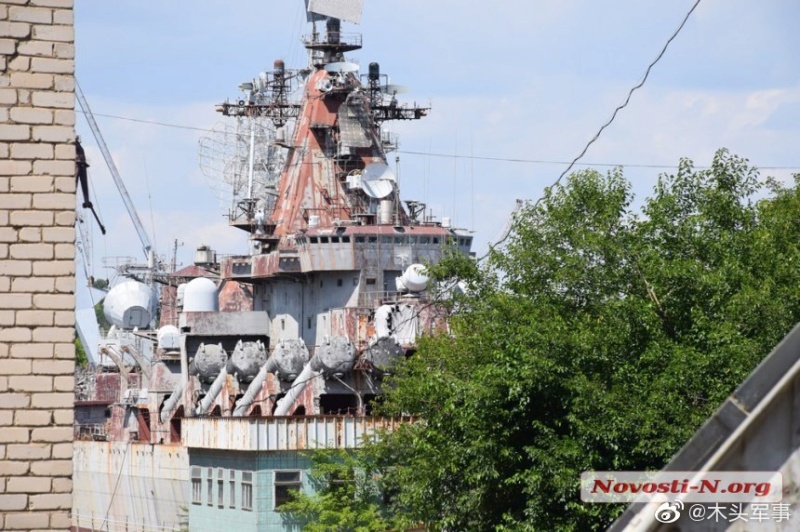 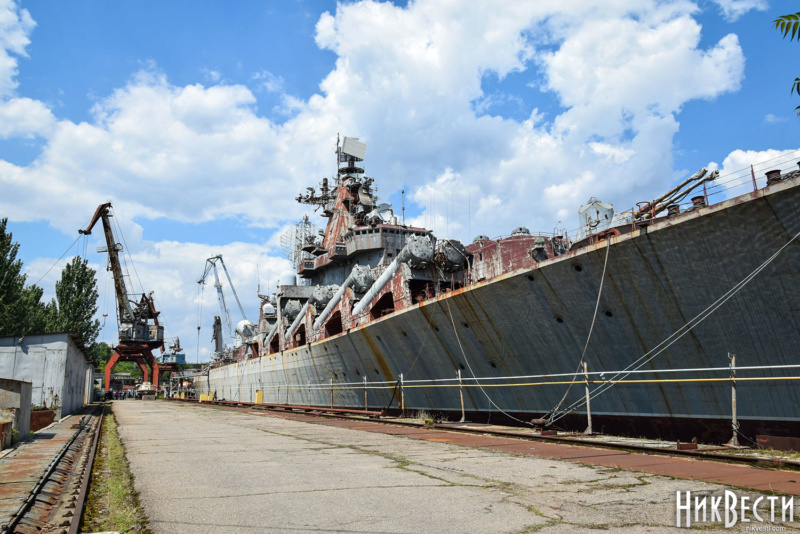 According to RIA Novosti, on July 19, 2019, President of Ukraine Vladimir Zelensky visited the Nikolaevsky Shipbuilding Plant, where, together with Defense Minister Stepan Poltorak, examined the unfinished cruiser. The minister suggested that the head of state begin the partial dismantling of the ship. According to Poltorak, now the armament and equipment of "Ukraine" are unsuitable for use. The construction of the fourth cruiser of the project 1164 "Atlant" called "Admiral of the Fleet of the Soviet Union Lobov" began in 1984. Six years later, the ship was launched in 75% readiness, and in 1993 it became the property of Ukraine and received its current name. In 1996, the completion of the cruiser was suspended due to lack of funding. Subsequent attempts to complete it did not lead to anything, and at the end of 2017, the Ukrainian Ministry of Defense stated that the Navy did not need such a ship.

Also, the Minister of Defense of Ukraine Stepan Poltorak proposed to President Vladimir Zelensky to complete the construction of the first Ukrainian corvette "Vladimir the Great" at the state-owned enterprise "Nikolaev Shipbuilding Plant".

The unfinished corvette, which began to be built in 2011, is located on the territory of the Black Sea Shipbuilding Plant. In particular, in the Ministry of Defense of Ukraine proposed to rent a room on the territory of ChSZ, to implement the program "Corvette", and then transport the design to the "Nikolaev Shipbuilding Plant". Stepan Poltorak said that the Ukrainian Navy needed 4 such corvettes.

- We are working to create a corvette according to NATO standards ... The corps is 80% ready, and the corvette as a whole is 32%. It needs 2 billion 240 million. By decision of the board, the implementation of this program was suspended in June 2014. To start work, we need up to a billion hryvnia, this is to resume the construction program. In total, it is necessary to complete 5.8 billion hryvnias to fully equip with navigation, equipment with outfitting. I think that, taking into account our weapons, the price will decrease. The second corvette will be less built, - said Stepan Poltorak. 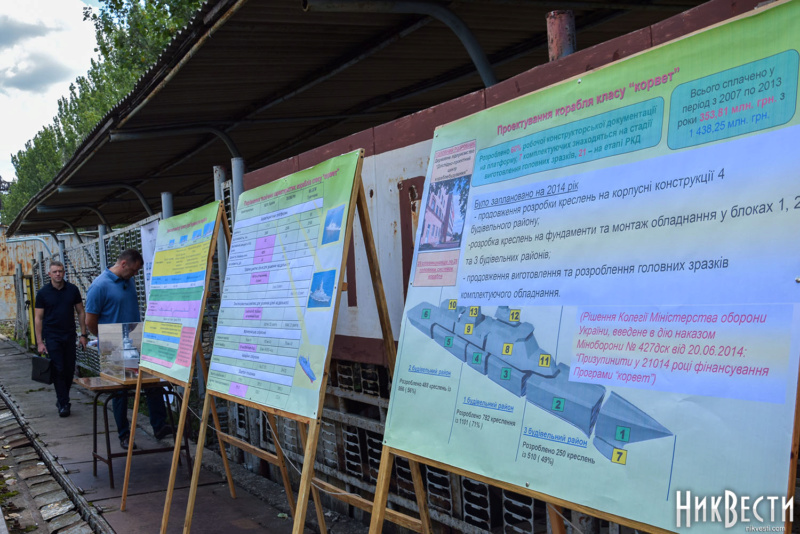 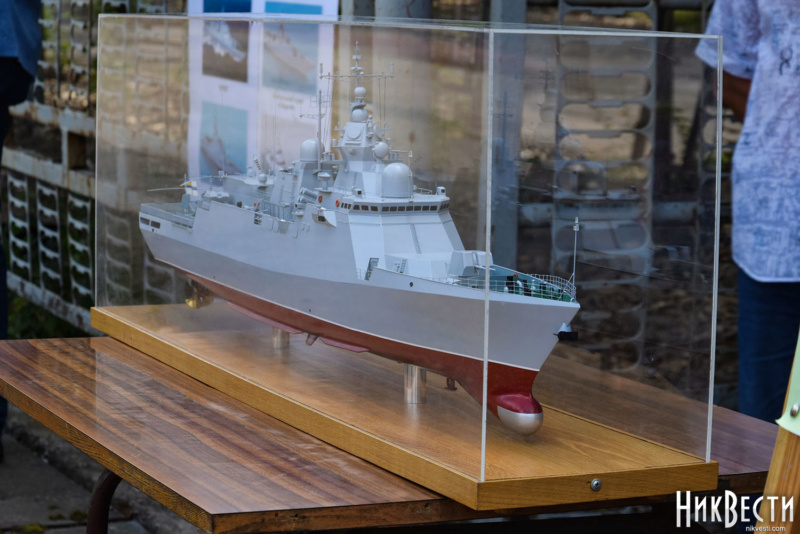