I was thinking about US bombing that kills more civilians than "terrorists".

But they are very easy target for ATGMs on water. Specially the top attack ones like french MMP that can hide 2 or 3 km inside the land.

They have optical jamming systems to prevent these French and other ATGMs from hitting naval vessels, but the primary method will be bombardment of the area for the landing first and the fact that most of the vehicles as they head for shore have fully stabilised guns and some serious fire power to deal with anything on the shore that dares pop its head up.


If they need artillery they can just have some Buyans tag along with that 100mm boom-stick, and don't even get me started on bigger stuff

The precision and rate of fire of modern naval guns means they will make a serious contribution to the fire power used in any landing plan.

Even vehicles afloat with fully stabilised guns and modern thermal sights should be able to engage targets all the way to shore and up the beach.

Not to mention likely air support in the form of modern attack helos.

Not totally familiar with Naval Infantry force structure but they will have an artillery component and if they are coalition based you could park a couple on the decks of landing ships and they could lay fire from there out to quite deep targets inland as the vehicles are exiting the ship and landing armour to clear the area of enemy forces and set up a bridge head so more equipment and troops can be brought in... or collecting a large force together to attack and seize a nearby port which could be used for landing a much bigger force.


But it's doubtful they will need them, planes and missiles will be clearing out the area long before Grens come close

Ideally there wont be that many enemy forces in the place chosen for the landing, so you will be most interested in getting troops and armour on the ground ready to repel any counter attack by the enemy from somewhere nearby... artillery and air power would be rather useful then...

Missiles would be for major Comms centres and HQs nearby and any major airfields or army positions that might intervene.


Ropucha has guns, grens not.

Well early plans for Grens included some rather bigger guns, and if they wanted to they could mount a twin barrel 152mm gun related to the one used on the Coalition... ammo unification with the Army would be good to keep the costs down, but landing ships would be supported by Destroyers and Frigates which today will have rather big guns... the 100mm and 130mm guns on Destroyers Udaloy and Sov respectively are currently being fitted to Corvettes and Frigates respectively, so Destroyers and Cruisers might have something even bigger... perhaps 152mm and 203mm guns... certainly the former... we know it was a joint navy/army design, but the latter is just hopeful on my part... it would be useful.


I was thinking about US bombing that kills more civilians than "terrorists".

The use of UAVs and forward observers and artillery should maximise the effectiveness and reduce waste in terms of rounds that hit nothing or the wrong targets.

Efficient artillery is the ideal in terms of effectiveness and cost and availability...

Next week, the crew of the project 11711’s second large landing ship will be occupied.

The large landing ship of the project 11711 “Peter Morgunov” will be ready for the first voyage into the sea in mid-June. About this "Star" reported responsible delivery contractor ship Sergey Panfilov.

There's a video from military acceptance in the link I think Sunday program will be about this project.
PapaDragon

Couple those of you more artistically inclined make a superimposed image of two versions of this ship?

We know that lenght is same to it should give us decent idea what to expect. From what I can tell based on this silhouette they didn't just move hangar to the front, they modified the front part (bow) as well and enlarged the whole bridge probably to make more room for helicopter facilities.

And would it kill the Navy if they released CGI of this ship?

The front mast has the same design so you could over lap them to determine the correct scale... the small 30mm gatling turret could also be used for scale... if you over lap each and they are the same size then that would confirm they are to the same scale so then overlap their hulls at the waterline... perhaps one in red and one in black...

...I would but my writing using a mouse has been criticised in the past...
hoom

We know that lenght is same

What makes you say its same length? By eyeball I think its longer.
The profile shown looks very shallow so I doubt they've increased draught, I guess hull could be wider though.

Hmm, doesn't seem to have a source but on Balancer a post says

According to the general director of Yantar, a lot of changes have been made to the architecture of the new ships based on the operating experience of the predecessors. New BDK 15 m longer and much wider.

Bastion-Karpenko has this profile from the event banner

We know that lenght is same

What makes you say its same length? By eyeball I think its longer.
The profile shown looks very shallow so I doubt they've increased draught, I guess hull could be wider though.

I just assumed, I had no idea you can just tweak the size of the ship on demand.

Even better if you can, makes things simpler.

hoom wrote:...Hmm, doesn't seem to have a source but on Balancer a post says

According to the general director of Yantar, a lot of changes have been made to the architecture of the new ships based on the operating experience of the predecessors. New BDK 15 m longer and much wider.

"Much wider", this is pretty big deal!

Original ship is quite wide just a tiny bit short of having enough room for two helipads side by side.

If they made them wider then they can easily have room for 4 helicopters on deck simultaneously, pretty amazing methinks.

If true then this ship could not only serve as basis for flattop helicarrier but also as one of those Japan-style anti submarine helicopter destroyers. If they sacrifice transport capability they would free up loads of room for weaponry down below.

Front segment alone can fit enough VLS cells to match Gorshkov frigate. Install compact radar mast on top and you have enough room for half a dozen Uran launchers.

Ship is large enough to handle anything you can dump inside it.

It would be anti-sub warfare dream come true, to say nothing of 4 to 8 anti-sub helicopters available.

Similar modification was pitched to USN with San Antonio class.

This could be huge.
hoom

I just assumed, I had no idea you can just tweak the size of the ship on demand.

When you redesign for a new build & make it heavier certainly.
The scale of changes should have really gained a new project number or at least an M.


Original ship is quite wide

Its pretty thin (16.5m), thats max to be able to navigate river/canal system which it was supposed to do.

Russians are so endlessly entertaining …

yeah I obviously looked at that … when I mentioned the length of the Ka-52 …
you are assuming they have the scale exactly right … and its pretty low rez …
so its ridiculous to say "is" …. best you can say is "probably"

I preferred to use published weights … as its the only "hard" data around so far
your methodology is flawed … you should use the hard data first ...

I'm not expert in ship building but 20% increase in tonnage means nothing in terms of lenght, could be more than 20% longer especially if they want more space for helipads.

Imo they put ka-52 to show what it will looks like with a chopper on it. Size should be scalled right.
Gazputin

whatever … seriously you need to have a beer ...

If true then this ship could not only serve as basis for flattop helicarrier but also as one of those Japan-style anti submarine helicopter destroyers. If they sacrifice transport capability they would free up loads of room for weaponry down below.

If they sacrifice the helicopters they could make it a really cool SSBN what are you talking about?

This is supposed to be a landing ship not an anti submarine ship or an improved frigate design...

The new episode of Combat Approved seems to have some information about the Ivan Gren and the new ships they are building:

"In late April, the fitting-out process and electrical works at the ship are to be completed. By mid-June, it will be able to take to the sea for the first time," Panfilov said on Sunday.

The Pyotr Morgunov is being built at the Yantar shipyard in Russia’s Baltic exclave of Kaliningrad. Yantar CEO Eduard Yefimov earlier said the Petr Morgunov was in a high state of readiness.

Project 11711 big landing ships are designed for landing operations on hostile territory, as well as hardware and equipment transportation. In peacetime they engage in humanitarian operations. The ro-ro ship has a bow to stern through passage for armor. It has a two-island superstructure and a hangar in the stern for one helicopter. The extendable construction makes the hangar fit for two helicopters. The hull and superstructure are made of steel. The ship can carry 13 tanks or 36 armored personnel carriers. The marine strength is 300-380 men. The ships can carry 1500 tonnes of cargo instead of the landing force. It can carry one-two Ka-29 helicopters or Ka-52K. Artillery arms include one 30mm AK-630M-2 Duet and two 30mm AK-630M. The displacement is 5000 tonnes, the length is 120 meters and the width - 16.5 meters. The speed is 18 knots, the cruising capacity is 30 days and the crew comprises a hundred men.

The first ship of this project - the Ivan Gren - was provided for the Navy in June 2018.

Production process down to less then 4 years.
Big_Gazza 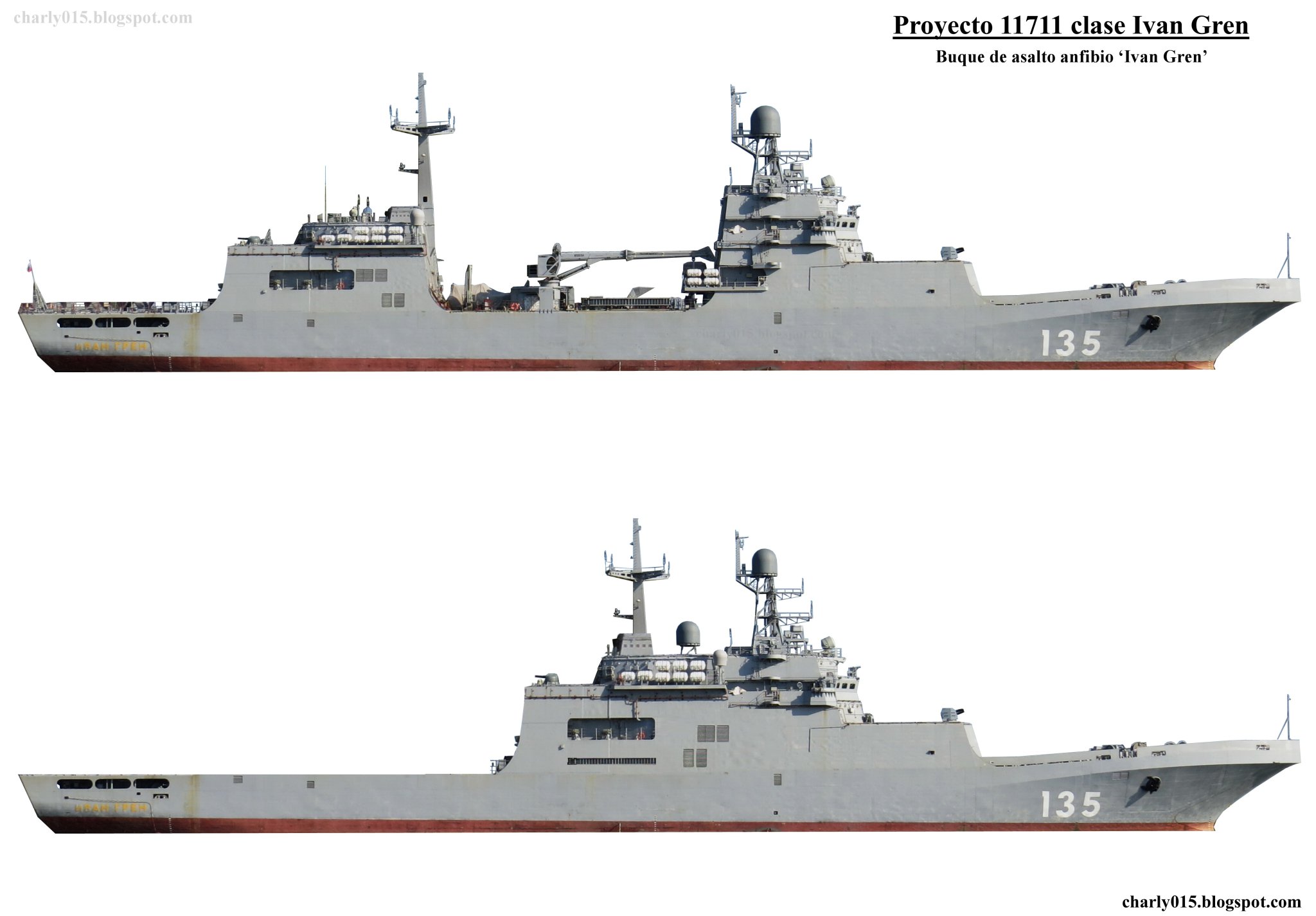 Clearly all credit to Charly015

Edit: Ahhh.. didn't see the previous post of the banner from Bastion Karpenko. I'll leave this up image anyways...

When not used for landing, it can cover the northern fleet by carrying some ka-27 instead of ka-29. Thanks to its landing capability, it can hide in shallow water near an island where no sub will detect her.
hoom

Edit: Ahhh.. didn't see the previous post of the banner from Bastion Karpenko. I'll leave this up image anyways...

Add the banner one to your post, its a pretty interesting comparison.
I think Charly015 is probably closer to the money than he's giving himself credit for.

Needs to raise the superstructure a level though, in the banner profile the sheer is flat from the bow.
hoom

Someone at Balancer further modified the Charly015 photo-chop, definitely pretty close I think.

Bow section is still identical to old version, it was modified and streamlined on new ones and entire top structure (what's that part called?) has been moved forward

Not sure what you mean?

Big_Gazza wrote:Extrapolation of the 11711 to give a likely general arrangement of the 11711.2

Clearly all credit to Charly015

Edit: Ahhh.. didn't see the previous post of the banner from Bastion Karpenko.  I'll leave this up image anyways...

So what did the crane do and why do they think they don't need it?

Will be interesting to see the description of the new model compared with that of the old because they clearly want more operational helos operating from this vessel as the much enlarged deck area should allow more than one to land or take off at one time... so perhaps a change in side by side transfer of material to transfer by air over greater distances and at higher speeds perhaps?
Sponsored content