Up to 50,000 Ratnik infantry gear sets are expected to be delivered within a year from now, with an eventual increase in deliveries to 70,000 a year

KUBINKA /Moscow Region/, June 16. /TASS/. Russia's "soldier of the future" will be wearing individual friend-or-foe sensors constituting an integral part of the high-tech Ratnik combat gear, the general director of the Central Research Institute of Precision Machinebuilding, which developed the system, said on Tuesday.

"There is an ordinary electronic friend-or-foe system: you direct certain instruments at it and receive a response. And there is a system using light-reflecting elements and colored signs that are visible only to devices operating within a certain part of the spectrum," Dmitry Semizorov told TASS on the sidelines of the Army-2015 forum in the Moscow region. "They will be seen only through our devices."

It is assumed that the soldiers’ friend-or-foe system will be enabled through attaching some kind of sensor on each soldier’s clothing. A soldier can then distinguish between enemy and friendly forces by looking at the screen of a special device similar in appearance to a mobile phone.

Semizorov noted that R&D work was well underway and "as soon as there are stable results," the system would be built into the Ratnik gear set.

Russia’s Ratnik-2 new ‘soldier of the future’ gear will have stronger firepower and less weight, Semizorov said on Tuesday.

‘The research work on Ratnik-2 has already been assigned by the Defense Ministry [ the Central Research Institute of Precision Machinebuilding]. This work is going on. Now co-manufacturers on this project for all aspects of this combat gear will be determined. This is research work and there will be no pilot samples in it. This is a research project to look for new materials and new technical solutions," Semizorov said at the Army-2015 international military and technical forum outside Moscow.

When asked about the outlook of the Ratnik-2 infantry combat gear, the TsNIITochMash head said "the principal direction in developing the combat gear is towards reducing its weight while raising the efficiency of its use."

This effect will be achieved through the use of new materials and the higher efficiency of the combat gear’s weaponry system, the TsNIITochMash head said. He didn’t rule out that the outfit would be supplied with new types of weapons.

The possibility for the Ratnik infantry outfit to use the elements of the exoskeleton and even the neuro-interface to read the soldier’s thoughts will "be widely studied and explored after the customer clearly formulates the task," Semizorov said.

Today, there is no technical assignment from the Defense Ministry for the exoskeleton development, he added.

The Russian army has already started receiving domestically-designed "future soldier" gear. Up to 50,000 Ratnik sets are expected to be delivered within a year from now, with an eventual increase in deliveries to 70,000 a year.

The new combat gear comprises about 40 components, including individual weapons, aiming and protection systems, as well as communication, navigation, and target acquisition and indication equipment.
GunshipDemocracy


Two 12.7 mm anti-materiel sniper rifles have been included in the armament suite of the Ratnik soldier equipment modernisation programme developed by Russian design bureau TsNIITochMash, a source in the bureau has told IHS Jane's .

"Ratnik has got two 12.7 mm anti-materiel rifles, namely the 6V7M and 6V7M1," said the source, pointing out that the rifles had successfully passed a number of trials. "Now we are waiting for them to be officially accepted for service," he added.

The rifles weigh approximately 11 kg, although the 6V7M1 is shorter and lighter than the basic 6V7M. The key feature of the rifles is their bullpup design. They are chambered for the Soviet/Russian 12.7 x 108 mm round and feature a magazine that can hold five rounds.

"Both rifles are basically equipped with the 3-12x 1P88-2 optical sight, which can be replaced by the 1PN139 thermal sight," the source said. The effective range of the 6V7M and 6V7M1 is 1-1.5 km. Their chambered muzzle brake is claimed to recoil significantly.

The Degtyarev plant, based at Kovrov, is currently producing the rifles on a serial basis.

The kit of the soldier of the future must be more than ultramodern; it has to be nothing short of magical. This is exactly what a 27-strong team of Saratov scientists are now working on.

The Special Purpose Materials lab that opened at the Saratov State University in 2014, is developing a soldier suit that would make the wearer invisible, keep him warm in winter and cool in summer as well as protect him against dangerous chemicals. A roll of gauze is fed into a huge, 20 meter-long, machine and, seconds later, similar gauze appears on the other side.

Though it looks exactly the same to the naked eye, the processed material consists of microscopic fibers which are applied to the warp which, in turn is mixed with fabric to obtain a regular outfit with very unusual properties. Depending on their chemical composition, the microscopic fibers can keep out gases and liquids, retain body heat or cool you down. And what’s more, they are also shock-resistant.

The research being done at the laboratory is three-pronged: camouflage, protection (including against chemical agents) and life-support. The new material can be used as part of a soldier’s outfit and as gas mask filters. Ground sheets are also being developed here. This is a new type of camouflage where nanomaterial is applied to the uniform to make it invisible to thermal imagers and night vision scopes. The new technology will also ensure against extreme cold, heat and even open fire.

The Saratov team has three years to develop the new protective materials which will then go into “active service” with the Russian armed forces.

Not News, but check out this beauty.

NPZ (Schvabe) PSU 1/4 originally unveiled late 2013, now exported to the Great Satan under the brand of Wolf (of ammunition fame).

There are a couple of articles about it on the US FA blogs and while I had been told amazing things about it around early 2014, here I can really see how the damn thing is well put together. Americans have been praising the sight.

I hope this would get considered as standart kit for Ratnik. 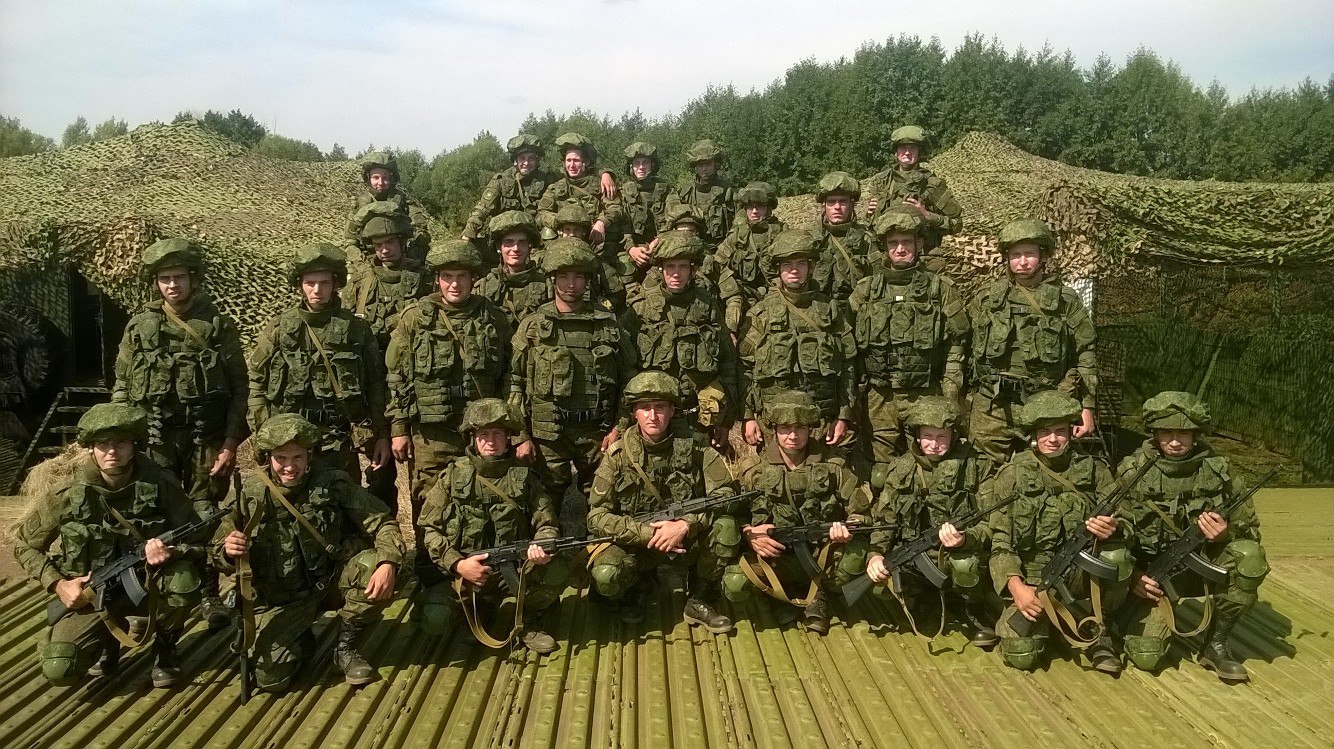 The era of mismatching Russian camos in each and every pic is well and truly over.
VladimirSahin

I cry every time

Soooooo... Is that Ratnik?

Largely depends on the units in the special op. Like the FSB/MVD and other internal units working mostly in Dagestan definitely look like amateur airsofters. The ones in military (GRU, SSO, etc.) look much more organized and uniform as seen when military spetsnaz were busy evicting Ukrainian troops from Crimea.

Russian troops to receive 71,000 'soldier of the future' combat outfits by year-end
KoTeMoRe

ult wrote:They have optics. They are in the armory. It's a standard practice. Usually officers are shit scared to give soldiers an expensive equipment unless it's an actual combat mission, because if it's damaged or lost they will personally be held responsible. And considering that optics cost a fortune, like 1PN93 for example, they rarely see the light of day. It's an outdated practice, sure. But still. We should be happy that everyone is in VKPO and not in "сменка" - the old, spare uniform that they wear to not damage a new one.

par far wrote:Why does rifles that the soldiers have, have no optics? I am just curious because most the west countries will have that for thier soldiers.

Is that necessary for conscripts? I mean these are not professional soldiers.

You are wrong. Those are not conscripts. There are no conscripts on the Russian - Ukrainian border.

Every brigade now has a battalion tactical group, which fully consists of professional soldiers and are always on high alert.

Indeed there's been a serious acquisition program regarding optics from 2006 to 2010. Obzor, Rakurs,Kashtan PK's, PO's bought by the freaking ton. This made redundant many PO/PSO/PSU sights that you see flooding the ranks of "volunteers" in Ukraine. They simply sit in the armoury or get out in manoeuvre day, like in Crimea.

Furthermore, as I posted, there are some new optics coming in (like the PSU1/4) that are on par with the best the West can throw and at a fraction of the price. It isn't bad per se. Since I believe that before training with optics you should be able to hit with IS. Soviet BDC (reticule) is also a big crutch once you know the insides of it. So no sweat.
KoTeMoRe

They got to do something about the order pouches and the map pouches. Those potato bags and postman purses are kitsch beyond kitsch.
magnumcromagnon

KoTeMoRe wrote:They got to do something about the order pouches and the map pouches. Those potato bags and postman purses are kitsch beyond kitsch.

So looks like this two-sided camo is getting issued along with Ratnik? I thought they forgot about it and went with VKPO. Or maybe it's the old photos that surfaced just now. Moscow. Near the National Defense Management Center on Frunzenskaya. 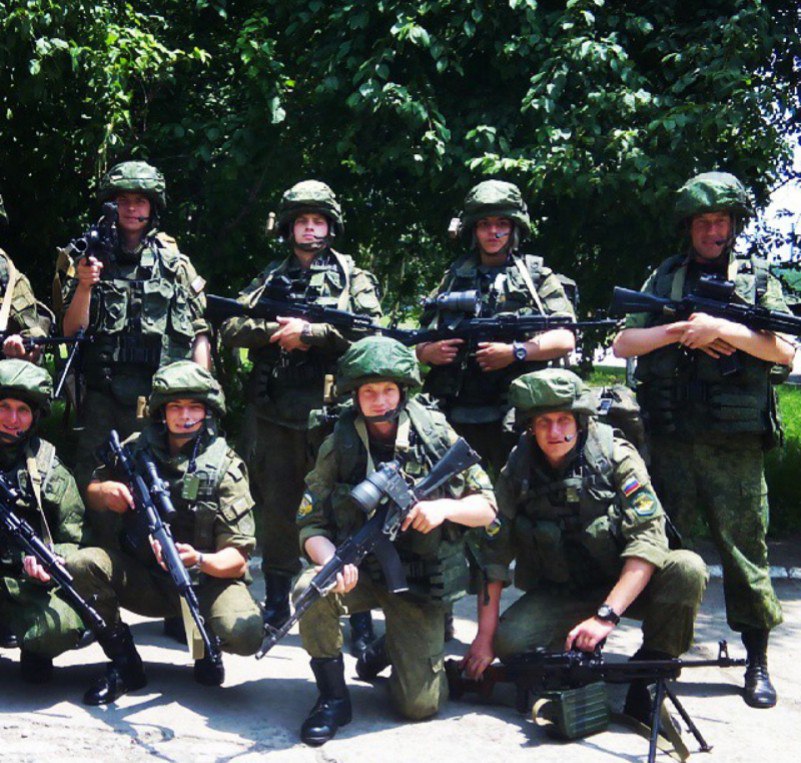 Imo, Ratnik, and in particular the numbers they are planning to procure, is one of the most impressive things regarding Russian military developments. Does that mean that average, active service Russian ground troops are going to look more tacticool than their "NATO" (whatever that means, Romania or the US?) counterparts? That will be HUGE. Like 70k by the end of the year, 50k+ every year after that, so -> around 350 000 Ratnik sets by the end of 2020?
sepheronx

Depends on if they upgrade it and how much the upgrade will cost and if they will contue Ratnik 1 introduction as well. Ratnik 2 is already being developed and the 50,000+ that is supposed to get it this year are testing it more or less en mass. If it turns out very effecrive then they can produce more hopefully reducing costs.

Chances are, it will be front line troops system and a spetsnaz system (modified of course) than a every soldier kind of system. But maybe it can become an every soldier thing. But may not entirely be needed as such.
sweartome123

I'm impressed that we're seeing the 6B43/45 body armor being issued in decent numbers to troops. For too long, inadequate and uncomfortable body armor has been the norm. The 6B43/45 is a huge improvement over the 6B23 and its predecessors. It's without a doubt one of the best pieces of body armor in the world today.
ult

6B43 and 6B47 are for everyone, they are being delivered without Ratniks as well. It becomes too hard to explain what is Ratnik and what isn't.

And it's unified. There will be no differences between Ratniks for VDV and Marines.

As for how tacticool it will look, it depends on the soldier and what he will decide to wear. That picture with the girl in the pink sweater/hoodie: One of the soldiers has a NPZ PSU-1/4. Nice.
Sponsored content