Last report I heard they were going to start introducing it in October this year.

I would suspect certain units who were field testing it are likely using it now as standard.
Mike E

GarryB wrote:Last report I heard they were going to start introducing it in October this year.

I would suspect certain units who were field testing it are likely using it now as standard.

“The Ratnik combat kit is currently undergoing the final stage of state trials. In December, field tests will begin in units of the Ground Forces, the Airborne Forces and the Marine Infantry of the Navy,” he said.

The Ratnik (Warrior) set is comprised of more than 40 components, including firearms, body armor and optical, communication and navigation devices, as well as life support and power supply systems.

What is the price of one set?
GarryB

$55.26 without rifle and ammunition.
NationalRus

lol so the overblown AK-12 has been scraped

GarryB wrote:$55.26 without rifle and ammunition.

Am I missing something? Only 55 dollars? Anyway, thanks.
Asf

a military bodyarmour already costs 2.000$ + 400$ for helmet + military nightvision another 4.000$+ thats already 6k+ for the basic stuff, and communication equipment etc. comes too....

- 'Ratnik' contract is signed.
- It will take three years to complete it.
- First 'ratniks' will be shipped in this year.
- There will be shown an export version of 'Ratnik' in 2015 in Abu-Dhabi
Viktor

'Man-at-Arms' would be a more correct translation of 'Ratnik'

There is report of a new Ratnik armor... a second generation one.. whats is different now?
Are there pictures of Ratnik2?

Also what happened to the AK-12? Did the army dropped it and will go for another? which one?
GarryB

I am sure there will be problems and parts of the system that don't work properly, but it is a huge step in the right direction and hopefully things will be improved over time.

I read somewhere that the early Ratnik was 36kgs and that the one being issued is 24kgs so that is a huge improvement on its own.

Next Generation Ratnik Soldier Equipment to be Adopted Into Service by 2015: Arms Company
GarryB

Interesting... the title suggests that the system will start to be adopted in 2015, but the article says it will start now and therefore be finished by the end of next year (2015)... is that possible?

Or is it a translation error?

Or am I interpreting it wrong?

I think it means it will start to come into service in last quartal of 2015 and not be finished in 2015.
GarryB

That is what I thought but it says:


The next generation Ratnik military gear will be adopted into service by the Russian Army by the end of 2015,

In other words it will be in service by the end of 2015 which I first interpreted as meaning it will start entering service at the end of 2015, but then it says:


"The first delivery of the Ratnik war gear is expected this year and it will be instantly adopted into service," Semizorov announced.

So it will enter service this year and will be "in service" by the end of 2015.

I take that to mean it starts entering service now and will be widely deployed by the end of 2015. 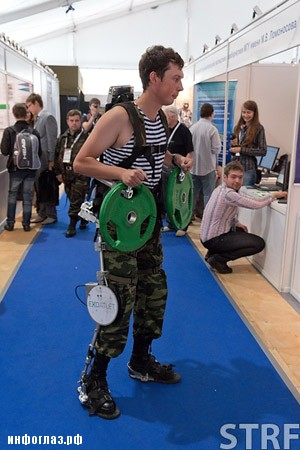 Personally I'd vote for bolters

They are small arms which fire rocket-propelled HE shells with AP core and delay fuse to explode in the body of a target! Sounds really brutal to me! is this soviet power rangers???

on mp.net, the guy with the black cat for an avatar posted about a scope that was kinda similar but cheaper too (it was a computerized scope). Looked very impressive. I will try to find it.
GarryB

Not being able to speak a word of Russian... just looking at the photos and pictures... I suspect the sight uses a QWIP based chip sensor to detect visible and IR light and to combine the detected wavelengths and use a small computer to process the images so in the IR a human would stand out because they are hotter than the back ground. This makes a distinct target that the computer can highlight as a target. With the use of a laser rangefinder and humidity and wind sensors (also laser based) the computer can calculate in real time the impact point of the bullet. The computer... if connected to the firing system can be used like the gun on the MiG-29... basically the laser range finder and ballistic computer calculates the firing solution and the pilot/rifleman pulls the trigger but the computer only fires the gun when the target is centred in the crosshairs/impact point.

In other words you point the gun at a person and pull the trigger and the gun will fire when it is most likely to score a hit.

On the MiG-29 the gun would fire only about 5-7 rounds and the targets were being destroyed.

The developer had said if he had known the system was going to be that accurate he would have gone with 75 rounds ammo instead of 150 rounds.

The western equivalent of the above is described here:

I remember first seeing the idea on a cool UK programme from the 1970s called "The Professionals" but it was only an M16 with a laser dot sight and a scope.

Interagency working group on evaluation of “equipment of the future” “Ratnik” on Tuesday, December 23 will summarize the work, the board member of the Military-Industrial Commission (MIC) Oleg Martianov told.

“It is expected that tomorrow (December 23), the Ministry of Defense will announce its decision on adopting “Ratnik” and its constituent elements,” O.Martyanov said on Monday.

According to him, “tomorrow we will have a meeting of the interdepartmental working group of the laboratory concerning the equipment.”

We will summarize the results of work on “Ratnik”. Tomorrow, we expect to hear a full report on this subject of the Ministry of Defense. We hope to hear from the military, what they decided concerning “Ratnik”, O.Martyanov said.