Wow, those are low number of enemy combatants killed in air strikes. The title sure says more than reality.
Benya

miketheterrible wrote:Wow, those are low number of enemy combatants killed in air strikes. The title sure says more than reality.

Indeed, I would wonder if Russia would have to intervene in Afghanistan. They would make quick work out of the taliban.

Another day another bomb in Kabul. This was today, 5 Danes wounded. 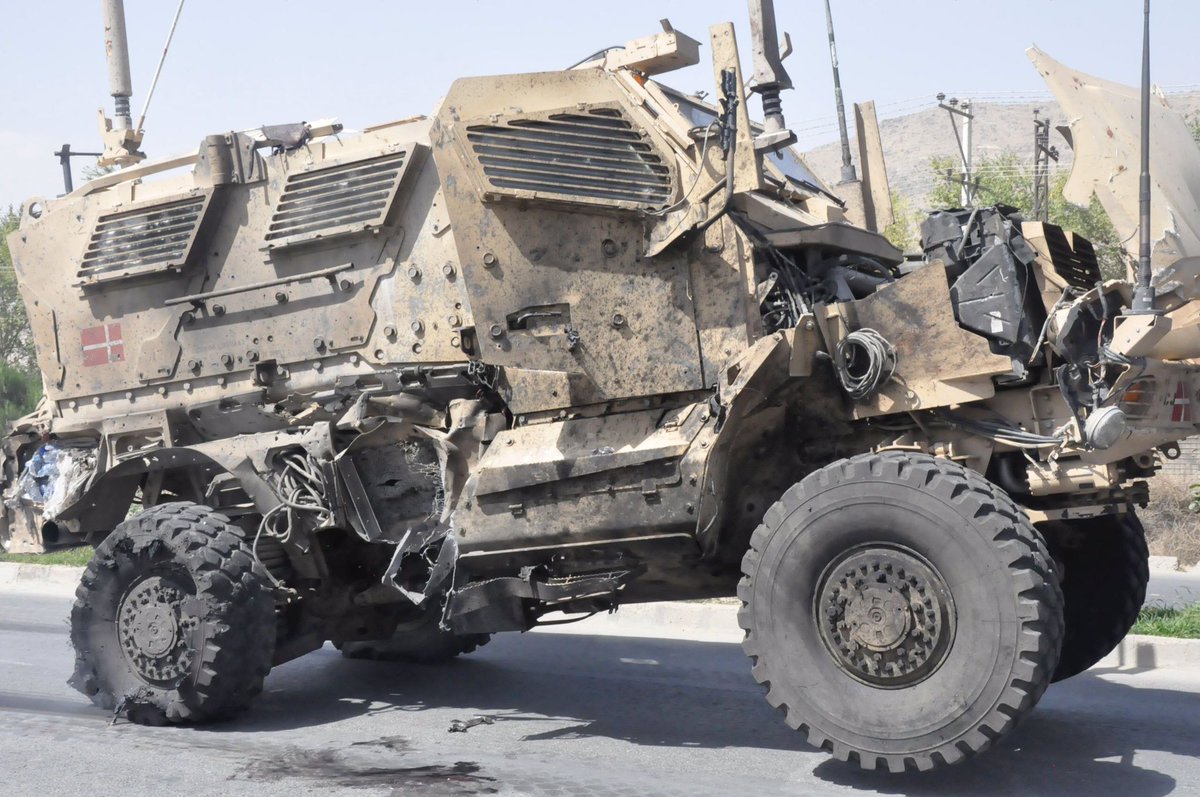 The death toll from an hours-long Taliban assault on a hotel now stands at 22, including a number of foreigners

At least 22 people are now known to have died when Taliban militants slaughtered guests at a luxury Kabul hotel, Afghan officials said Monday, as fears grew that the attackers may have had inside help.

Authorities warned they were still investigating how militants breached security, which was taken over by a private company three weeks ago, at the landmark Intercontinental Hotel late Saturday.

Guests cowered behind pillars and in rooms as gunmen sprayed bullets and set fire to parts of the six-storey building. Some people climbed over balconies, using bedsheets in a desperate attempt to escape.

The attack ended after more than 12 hours Sunday with all six militants killed by Afghan forces, aided by Norwegian troops.

"Some of the bodies (are) burned badly and need DNA tests to be identified," he said.

Six Ukrainians were among those killed in the assault, the country's foreign ministry has confirmed.

Interesting article on the moves the US is making in Afghanistan. its own plus ISIS

Tehran has begun highlighting in loud decibel its hitherto-low key voice of disquiet that the United States is transferring the Islamic State* fighters from Syria and Iraq, where they have been defeated, to Afghanistan.

On January 30, Iran’s Supreme Leader Ali Khamenei said: "The US goal of transferring the ISIL terrorists to Afghanistan is aimed at creating the justification for its continued deployment in the region and for buttressing the security of the Zionist regime." Indeed, any statement at the level of the Supreme Leader invariably draws attention as signaling an authoritative policy directive based on careful decision taken in the light of relevant intelligence inputs.

MOSCOW, June 9. /TASS/. The radical Taliban movement (outlawed in Russia) announced on Saturday a three-day ceasefire with Afghanistan’s authorities due to the celebrations of Muslim holiday Eid al-Fitr, the Pajhwok Afghan News reported.

Taliban controls more than half of Afghanistan’s territory - Russian diplomat

MOSCOW, July 16. /TASS/. Taliban (a radical movement outlawed in Russia) is present in most of Afghanistan’s provinces and controls more than a half of its territory, Russian president’s special envou on Afghanistan and director of the Russian foreign ministry’s second Asia department, Zamir Kabulov, said in an interview with the Kommersant daily on Sunday.

"Taliban is very integrated into Afghanistan’s military and political life. It controls more than a half of the country’s territory by now," he said.

According to the Russian diplomat, Taliban is present in most of the country’s provinces and is a key force even where an official administration is present. "As a matter of fact, they establish parallel power bodies, including a court system Afghan people have more confidence in than in the official one," he noted.

"So, in this sense, they are very integrated into Afghanistan’s state life," he added.

Militants from the terrorist group Islamic State are present in nine out of Afghanistan’s 34 provinces, he added.

"So far, luckily, they are present only in nine Afghan provinces. But what we are worried about most of all that these are northern Afghan provinces bordering Central Asia," he said. "It is a serious threat for us. So, we cannot play down the Islamic State threat."

"History, including Afghan history, teaches us that problems must be resolved before they grow into a serious threat," the diplomat noted.

Kabulov also said that Russia will invite representatives of the Taliban radical movement (outlawed in Russia) to a Moscow-format meeting on Afghanistan to be held before the end of this summer.

"In order to facilitate the process of launching negotiations we, already last year, we initiated dialogue of the so-called Moscow format. By the end of this summer, we will organize another meeting in this format, but it needs thorough preparations to yield, if not a breakthrough, but a visible result. We want it to be the beginning of real progress, which is possible only when Taliban begins to speak with the Afghan government or with a more or less broad spectrum of the Afghan establishment," he said.

According to Kabulov, the problem is that Taliban considers Afghanistan’s current government "as a puppet one installed by the Americans, and, hence, illegitimate." "They don’t’ want to hold talks with it but want to negotiate separately with the Americans," he noted.

He stressed that the key goal of the Moscow format is to help launch dialogue between the Afghan government and Taliban. "If we don’t invite Taliban, there will be no dialogue," the Russian diplomat said. "That is why we hope Taliban will come to the meeting."

Moscow baffled at US accusations of hindering Afghan settlement

MOSCOW, November 13. /TASS/. Russia is baffled at the United States’ attempts to accuse it of hindering dialogue between the Afghan authorities and the radical Taliban movement (outlawed in Russia), especially on the background of the recent consultations in Moscow that involved both parties, the Russian foreign ministry said on Tuesday.

"We took notice of the statement US Under Secretary of State David Hale made at a conference organized by the Washington Institute for Near East Policy on November 8, where he said in particular that Russia is allegedly hindering peace talks with the Taliban movement," the ministry said. "Such statement cannot but be baffling on the background of Russia’s persistent efforts in cooperation with the regional partners to facilitate the launch of the process of intra-Afghan reconciliation."

The ministry recalled that on November 9 Moscow hosted a conference on Afghanistan that involved delegates from Kabul and Taliban and that was attended by an observer from the United States. "According to the participants, the conference was a major step on a path of establishing direct peace dialogue between Kabul and the Taliban movement," the ministry stressed.

"We consider Hale’s pronouncements as a clumsy attempt to shift responsibility for the United States’ own failure in Afghanistan and the lack of progress in Washington’s efforts to find a solution to the Afghan problem on Russia," the ministry stressed.

On November 9, Moscow hosted the second meeting of the Moscow-format conference on Afghanistan. It was attended by senior diplomats, special envoys and observers from Russia, Afghanistan, India, Iran, Kazakhstan, Kyrgyzstan, China, Pakistan, the United States, Tajikistan, and Uzbekistan. A delegation from Taliban’s political office in Doha took part in the conference, for the first time.

After the conference, director of the Russian foreign ministry’s second Asia department, Zamir Kabulov, said that the Taliban said it would be ready for talks with the Afghan government only after a schedule for the withdrawal of foreign troops is agreed with the United States.

As reported on January 28, 2019 by RIA Novosti news agency, Special Representative of the US Secretary of State for Afghan Reconciliation Zalmai Khalilzad confirmed that the United States and the radical Taliban movement agreed on the basic framework of the agreement, which could lead to the complete withdrawal of American troops in exchange for a ceasefire and the Taliban talks with the government of Afghanistan. This writes the American newspaper "New York Times".

Guess no one has seen this:

At least 14 Afghan servicemen and militiamen were killed, and over 10 others were injured in the clashes with Taliban, provincial council member Jawid Majidi said as quoted by the Ariana News broadcaster.

Taliban also seized a number of weapons and equipment after the retreat of the Afghan forces.

The report comes after some 10 Afghan security force servicemen were reportedly killed and up to 13 others were wounded in Taliban attacks in the country's southern Helmand province.

Meanwhile, negotiations between US and Taliban officials that took place in late February in Doha have reportedly resulted in the agreement to prepare a framework that requires the United States to withdraw troops in exchange for counterterrorism pledges from the movement representatives.

Fierce clashes between the Afghan government forces and Taliban insurgents are not uncommon in the country, which has been torn by conflicts since the late 1970s, including with the involvement of foreign forces.

The explosion hit the diplomatic quarter in Kabul. Moreover, one of the Afghan Ministry of Defense buildings is located near the place where the blast went off. At least thirty-four people died and sixty-eight were injured in the blast, Xinhua News Agency reported. The injured were transferred to hospitals.

The explosion site is cordoned off by law enforcement officers. According to the Afghan TOLOnews TV channel, two militants, who were involved in the terror attack, took cover in an adjacent building. They are now engaged in gunfire with security service agents.