It is very likely that the very long range S-400 missiles will use onboard radar seekers either in SARH or more likely ARH and possibly with an IIR backup seeker fitted so much like a long range shot with an R-77 precise continuous tracking of the target is not strictly essential and mid course updates would be sufficient to ensure the target does not move outside the missiles own detection area by the time the missile gets there.

Just like the R-37 missile fired at a target 300km away that was beyond the detection or tracking range of the Mig-31M that had not been fitted with an upgraded radar yet and was using a standard ZASLON radar, yet through the use of a Su-30 closer to the target providing target data the target was engaged and hit.

A corvette operating near a home coastline could use data from the aerospace defence network as well as the navy network to find targets to engage at distances well beyond those its own sensors could detect targets at.

The Russian plan for Su-30M miniAWACS fighter management aircraft with smaller lighter aircraft like Mig-29s operating closer to the enemy with their radars off operating silently is an example of using smaller lighter platforms to operate closer to an enemy using the more powerful long range sensors of other platforms to delivery weapons without giving away their positions, yet being able to detect the enemy well before the enemy detects them and deliver weapons silently and leave to rearm leaving their return to base to rearm and refuel covered by the heavy platforms that gave them the tactical advantage in the first place.

Maximise the performance of the systems by using big long range radar and big long range missiles on multiple small cheap platforms that can operate closer to the enemy without being noticed/detected yet able to defend themselves and deliver medium and long range missiles every bit as potent as the weapons of the larger more expensive systems which by definition you can't afford to have many of in terms of cost and manning limitations.
Viktor

few more days until my computer is fixed

best looking ship in its class

30.07.2013 Bookmark fourth Project 22350 frigates will be dedicated to the 101 th anniversary of the "Severnaya Verf" notes November 14, 2013. The same day the company will provide the shipbuilders and the second vessel logistics ice class project 23120. This is the general director of OAO "Shipyard" Severnaya Verf "Alexander Ushakov.

third serial frigate already got the name - "Fleet Admiral Isakov," said CEO of the shipyard. "Right now, in front of the factory delivered important tasks. Until 2020, the shipyard has built and delivered to the Navy six frigates of Project 22350, Project 20380 corvette and four Project 20385 corvettes. In the Company's backlog of orders two ships connection project 18280 and three marine vessel logistics project 23120. The lead ship, named "Elbrus" was solemnly laid November 14, 2012 , the day of the 100th anniversary of the "Northern Shipyard". Main immediate task of the enterprise - the beginning of the test head of Project 22350 frigate "Admiral Gorshkov", - said the head of the company.

Supposedly it has been fitted since last year, they just covered it up with wood.
Viktor

Viktor you trying to make Russian politicians jealous with that prediction

Viktor you trying to make Russian politicians jealous with that prediction

LOL .... only I said it would be great. Its now up to Russian politicians to push for 50 of these beauties so eventually when they miss the target by 20-25% we all will still be very proud of them

If they missed that number by 50% I will personally send you a crate of Vodka!

A stunner it is, I think one doesn't have to be a Russian mil fan to consider this the best (or one of the very best) looking "stealth" ships around. Looks completely balanced, lines are stately but elegant....combine that with a killer radar suit and cutting edge weaponry...if only tempo would pick up!
TR1 Photos from the ceremony: http://bastion-karpenko.ru/22350_isakov/
TR1 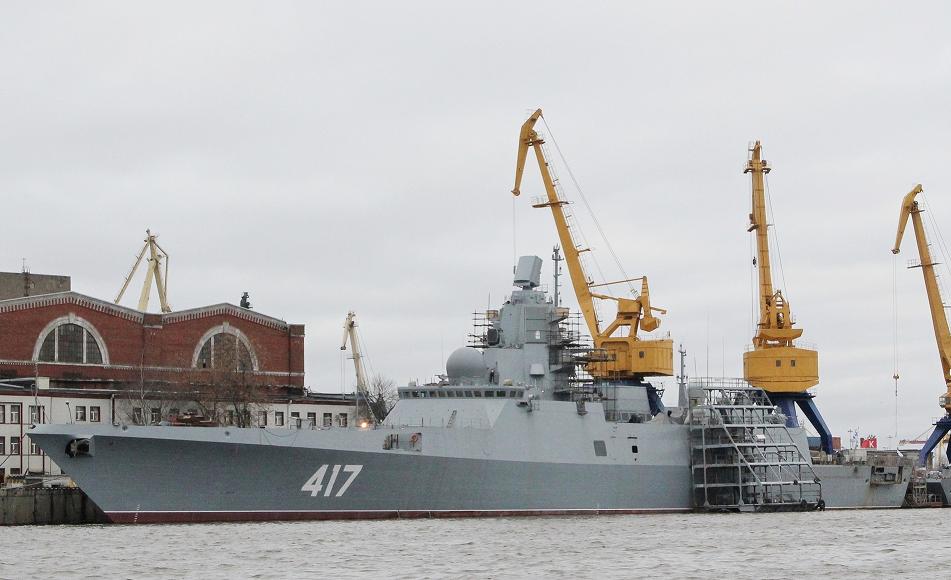 What is the radar above the bridge in a dome structure ?
TR1

I am not sure why they are taking donkeys years to build first of class , The pace of Gorshkov construction is dissapointing ....reminds me of our own MDL and their Frigate/Destroyer they build in donkeys years.

Culdnt find any thing on Google , Any link to Specs , Pictures would be nice , Thanks
TR1

Anyways the problems with a pilot unit are well known.
What is interesting is how long the 2nd and 3rd units will take. If it is anything as long as Gorshkov, then we have a problem.
TR1

Culdnt find any thing on Google , Any link to Specs , Pictures would be nice , Thanks

Can't really find any specifics myself, aside from general (surface radar)

Can any one confirm Brahmos will arm the Gorshkov class frigate ? There was some news to that effect but officially it is confirmed ?
GarryB

Brahmos is compatible with the UKSK launcher, so potentially every vessel fitted with such a launcher could carry it.

Whether they actually adopt it in Russian service is another matter as Brahmos is limited in range and payload weight by export limitations (less than 300km range and less than 500kg warhead weight).

I rather suspect new build Onyx missiles will have the new electronics and solutions of Brahmos but without the range limitations... which they might call Brahmos to keep India happy.
Viktor

We are waiting for the gun ... for several more days.

Austin wrote:What good about A-192 Guns ?

It took time to work out the 100mm versions problems, and this is a much heavier mount overall. Hence, the delays.
GarryB

Think of it in terms of a 30 cal weight rifle with the performance of a 50 cal rifle...