Isos wrote:The guy I already told about. Former US submarine sonar operator that is totally pro-US. And he says that .... huge.

Loving it. The USN brass are kept up at night with the nightmare of 9-12 invisible Yasens unleasing dozens of hypersonic PGMs against their floating elephants... The first serial nuclear submarine of the Yasen-M project, Novosibirsk, will be launched on December 25

Budnichenko said that two nuclear submarines (NPS) of project 885M Yasen-M, the construction contract of which was signed in 2019, will be laid down on May 9, 2020.

Looks like we will have 2 borei and to Yasen submarines laid down on 9 May.
George1

The nuclear-powered submarine Kazan is a modernized fourth-generation ship

"The nuclear-powered submarine Kazan is a modernized fourth-generation ship. It differs from the Yasen-class lead nuclear-powered submarine Severodvinsk by its new combat control and integrated sub control systems," the chief executive said in an interview with the Shipyard’s journal Zavod on the eve of the enterprise’s 80th anniversary that will be celebrated on December 21.

The Kazan is "an unusually complex ship," the chief executive said. "That is why, some aspects surfaced in the process of trials that will require additional tests at sea in 2020."

"The ship is very good. During the sea trials in 2018 and 2019, it demonstrated excellent maneuvering characteristics. We are continuing to check the nuclear-powered sub at sea: it is necessary to test a large number of new types of armament and military hardware installed on it," the chief executive said.

The Kazan is the first multirole nuclear-powered submarine of the improved Project 885M (Yasen-M). It was laid out at the Sevmash Shipyard in 2009 and floated out on March 31, 2017. The sub is expected to join Russia’s Northern Fleet where the lead Yasen-class submarine Severodvinsk is in operation.

6 years to launch it vs 8 for kazan the other 4 under construction should take easily 5 years. So they will have 7 of them before 2025 and 2 more will be started on 9th may 2020 to get them before 2030. They will be able to remove sierra and victor subs.

IMO it will be enough then switch for Husky to replace akulas starting 2030.

Also it looks like that Kazan and Novosibirsk will both be delivered in 2020, maybe experience with Kazan sped up time frame for Novosibirsk?

Russian Navy Will Get 4 New Nuclear-Powered Subs In 2020


..."In 2020, we must deliver four nuclear submarines to the navy: Belgorod nuclear-powered submarine, Project 955A class strategic missile underwater cruiser Knyaz Oleg, as well as two Project 885M multipurpose nuclear submarines Kazan and Novosibirsk," Budnichenko said in an interview with TASS on the eve of the shipyard’s 80th anniversary, celebrated on December 21...

Isos wrote:6 years to launch it vs 8 for kazan the other 4 under construction should take easily 5 years. So they will have 7 of them before 2025 and 2 more will be started on 9th may 2020 to get them before 2030. They will be able to remove sierra and victor subs.

IMO it will be enough then switch for Husky to replace akulas starting 2030.

Provide proper funding, the timeline will compress for sure. I bet.

Regarding 945 and 671RTMK, why so much urge to dispose them off?
945s are already undergoing upgradation.
Hole

A timeframe of 5 to 6 years is really good. Don´t waste money in trying to speed up the construction process even more, instead use the money to order more.
Dima

By funding, I did not mean pouring in excess money than whats required, but to make the whole funding available/uninterrupted for the entire duration of its construction.

6+ yrs from laying down to launch is a consolation by what the Russian industry has been forced to work upon, but it need to be reduced to less than 5 years, so that in case of additional fine tuning, the commissioning comes inside of 6 years.

Taking a closer look at the 885M we see the following timeline from laying down to launch.
Kazan - 7 years + 8 months
Novosibirsk - 6 years + 5 months

Actually pace of Russian nuclear submarine construction has finally reached European average more or less so I'd say things are pretty good right about now especially when you consider difference in size and complexity: 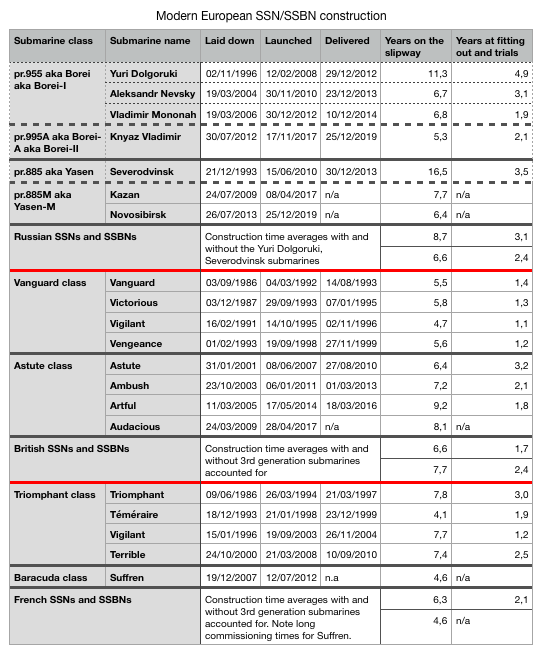 What they could do is to start building nuclear subs in additional location, Zvezda could be a good candidate down the road, they already overhaul Oscar SSGNs and will soon be certified to build nuclear vessels

Soviets build their nuclear subs in Russia so the industry didn't suffer during the fall of USSR as opposed to big ships which were build in what became Ukraine.

Only money was an issue.

In your datasheet you can see they are even better than french and british fir the newest subs. USSR was even faster and finished Typhoons in some 4-5 year IRC.
JohninMK 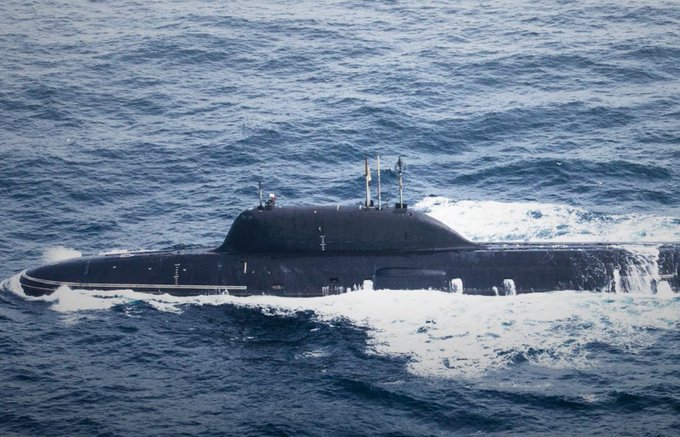