I've been thinking: is it possible that Russia is sitting on Borei-K SSGN project because they are waiting for START treaty for fizzle out before starting construction to avoid needless bad PR?

I know that it's not in contradicton to the treaty and that USA is already operating Ohio SSBNs but I would 100% expect USA to use it as one of excuses to pin the blame for treaty getting scraped on Russia.

Waiting several months before ordering them would cost them nothing and USA would have one less possible excuse for letting START expire.

Don't you mean the Borei-K SSGN project... and you answer it yourself... the US does not want to sign it to renew it so they wont... any excuse they use would never be the real reasons anyway and whether they can justify it or not they wont be signing a new agreement any time soon so who cares what reasons they use.

I rather suspect they want to include hypersonic weapons in both a replacement for the INF treaty and the New New START treaty... and I hope the Russians wont give up that... I am also sure the US will demand China be included but wont demand the UK or France be included too... including France and or China would mean no change of an agreement... why would they give up anything when the US and Russia have so many more much more powerful weapons?
Hole

A few pics from the fat fellow. 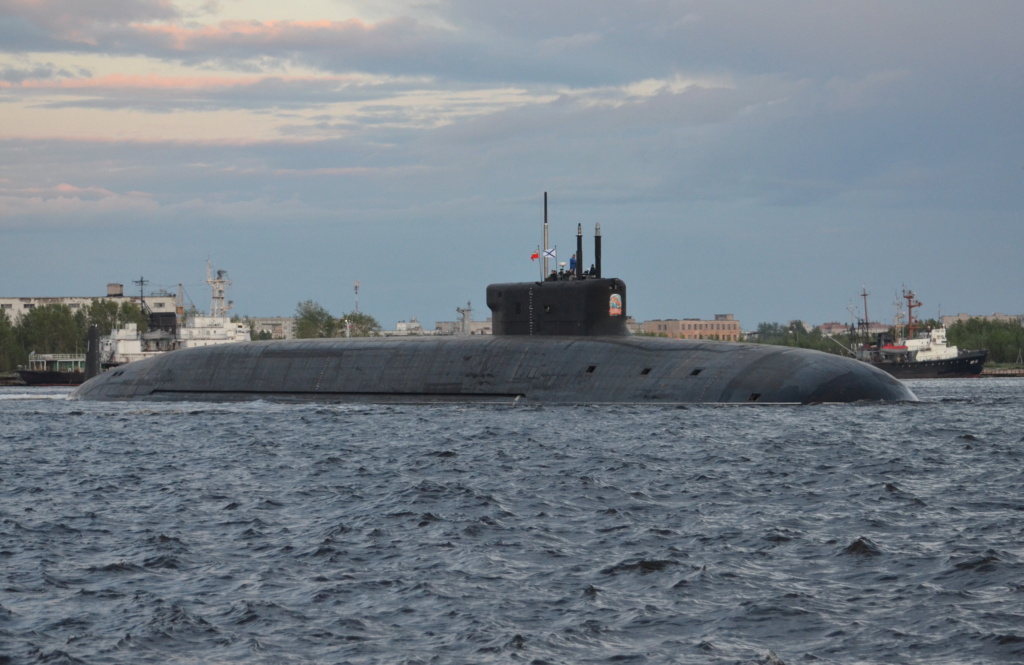 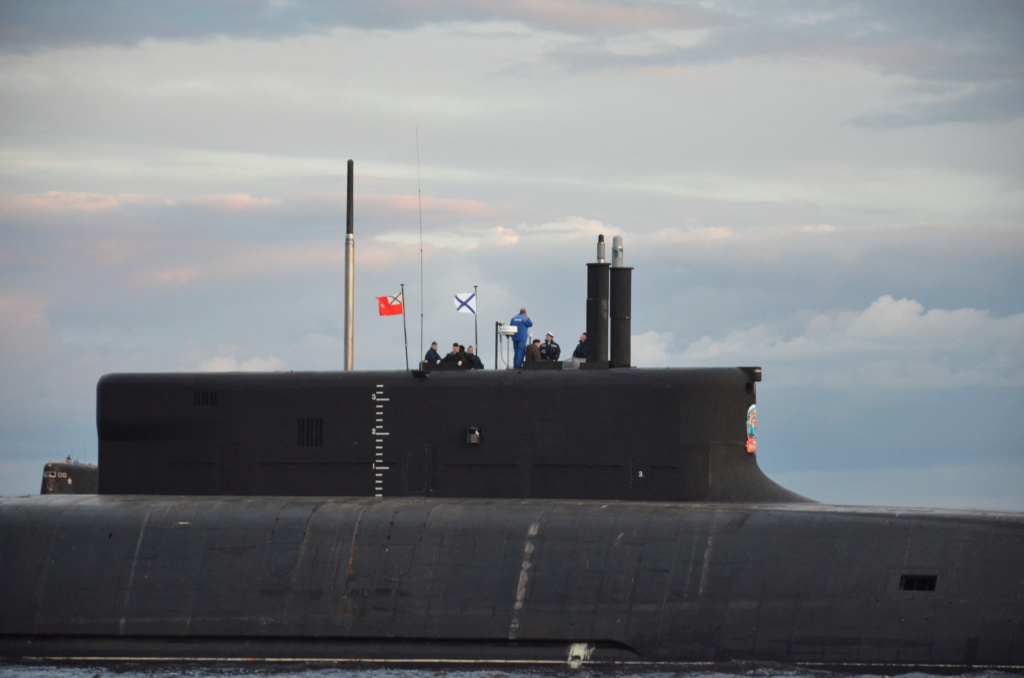 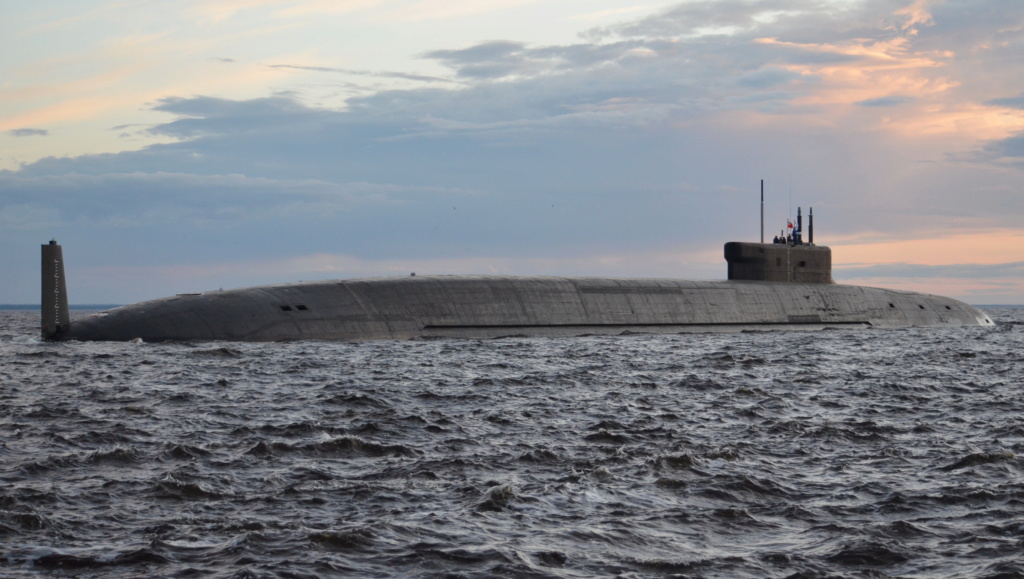 If these are recent pics of going out to white sea then we may hear about a Bulava launch in coming days.
dino00

Source: the head "Borey-A" "Prince Vladimir" at the end of June will resume running trials

MOSCOW, June 14. / Tass /. Strategic missile cruiser “Prince Vladimir” of Project 955A (code “Borey-A”) at the end of June 2019 will go to sea to the second stage of factory trials. About this TASS reported a source in the military-industrial complex of the Russian Federation.

“After the measurement of magnetic electric fields at the berth wall of Sevmash, Prince Vladimir will be released into the sea at the end of June to pass the second stage of the factory test run (ZHI), which will last several months,” the agency’s source said.

He recalled that "Prince Vladimir" first went to sea at the first stage of the ZHI at the end of November 2018 and returned to Sevmash at the beginning of January 2019.

"During the tests, some technical problems emerged, which, however, should not affect the delivery of the ship to the fleet at the end of 2019," said the source and confirmed that the missile carrier would serve in the Northern Fleet.

Those April pics have it sitting much lower in the stern, bow up & I think generally lower.
These new pics show it more properly as a direct variant of the original Boreis.
dino00

The construction of four ships is expected to begin within the framework of the state armament program until 2027.


"At the Army-2019 forum, it is planned to sign a contract of the Ministry of Defense with USC to build two more Boreev-A and two Yaseni-M in addition to the already contracted submarines of these types," the agency’s source said. He added that "the construction of four ships will begin as part of the state armament program until 2027, but they will be handed over to the fleet after it is completed."

The construction of the Boreyev and Ash-m for the Russian Navy is being conducted by the defense shipyard Sevmash. In accordance with the state armament program, designed for the period up to 2027, eight Boreans and seven Ash trees should be built and transferred to the fleet. To date, there are three Boreas of the basic project 955 (Yuri Dolgoruky, Alexander Nevsky and Vladimir Monomakh) in the naval squadron and one Project 855 Yasen (Severodvinsk). The head submarines of the upgraded projects 955A "Prince Vladimir" and 885M "Kazan" were built and are at the stage of factory trials.

Still not enough tho.

Borei-A seems to be longer. 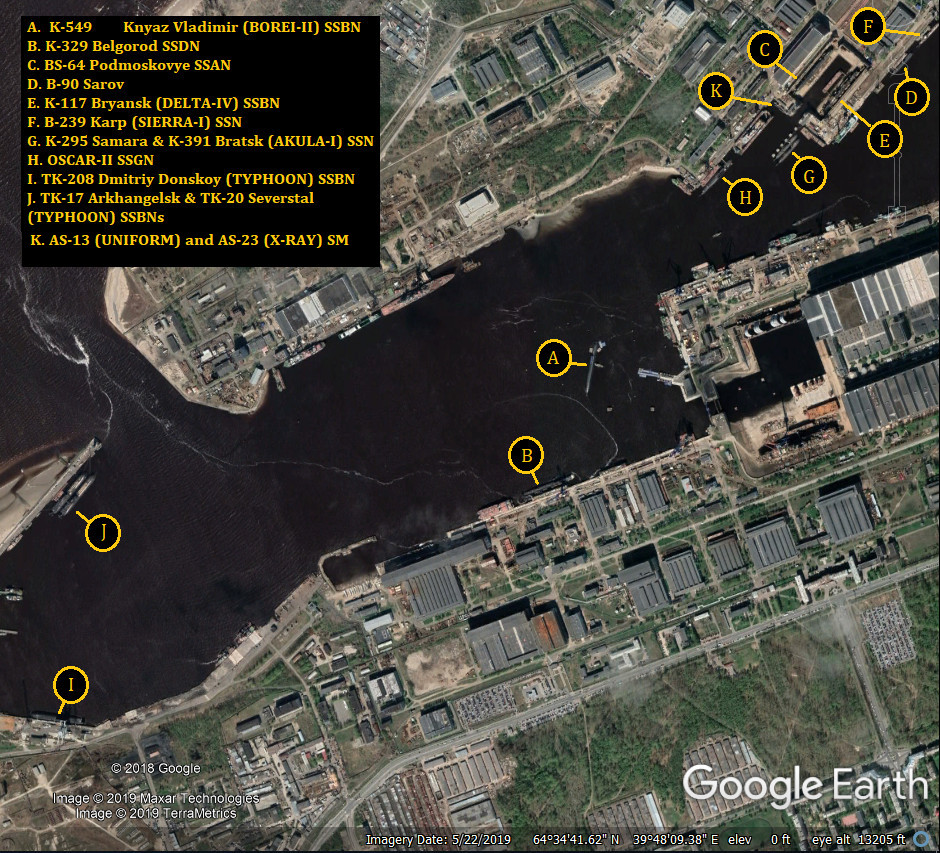 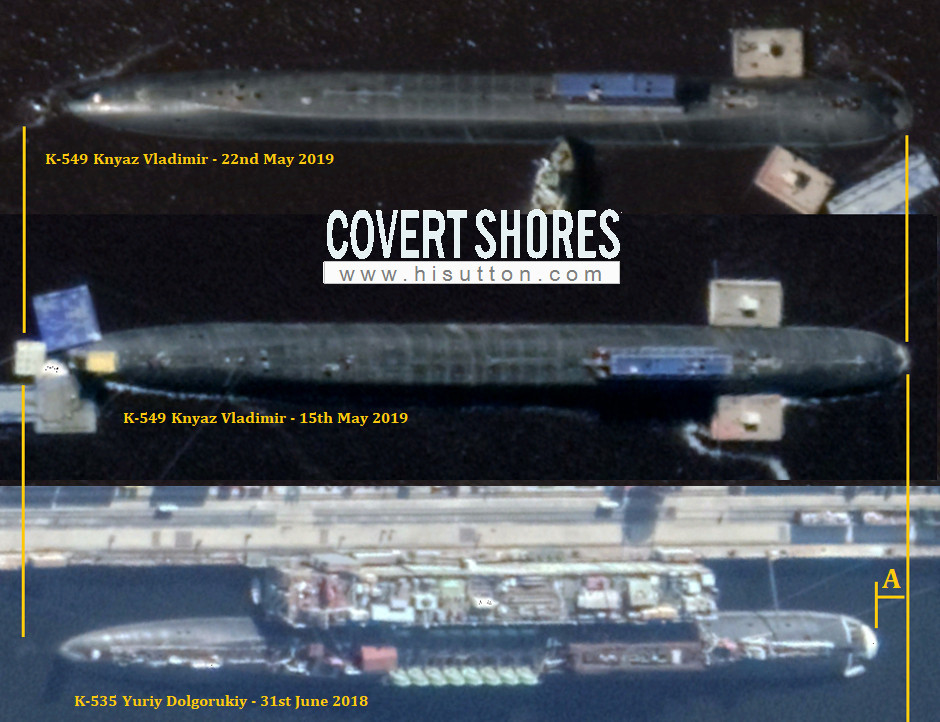 Should have just kept his mouth shut.
hoom

Looking at the HI Sutton drawing above with absent flank arrays & recent suggestion that Yasen-M has a Lada style conformal array, might Borei-A have same? (or modular variant)

Makes sense to share that same tech on both types.
Bow torps on the Borei-Adoesn't preclude the conformal array since Lada has bow torps but might mean a somewhat different setup than on the Yasen-M.
dino00

Should have just kept his mouth shut.

Don't understand your point. They are saying WHEN the current submarines being built will be completed.
dino00

At the same time, the construction of nuclear submarines such as "Borey-K" is not planned

Their cruise missile armed subs will be used in conventional war so they don't need to be state of the art super stealthy... the vast majority of the countries on the planet couldn't track down a Foxtrot off their coast let alone a more modern sub like a Delta IV which could carry cruise missiles in two stacks or one stack with a greatly reduced hump size....
hoom

Monomakh from a while back (its in PD-50) but thats gotta be the clearest hull shot yet. 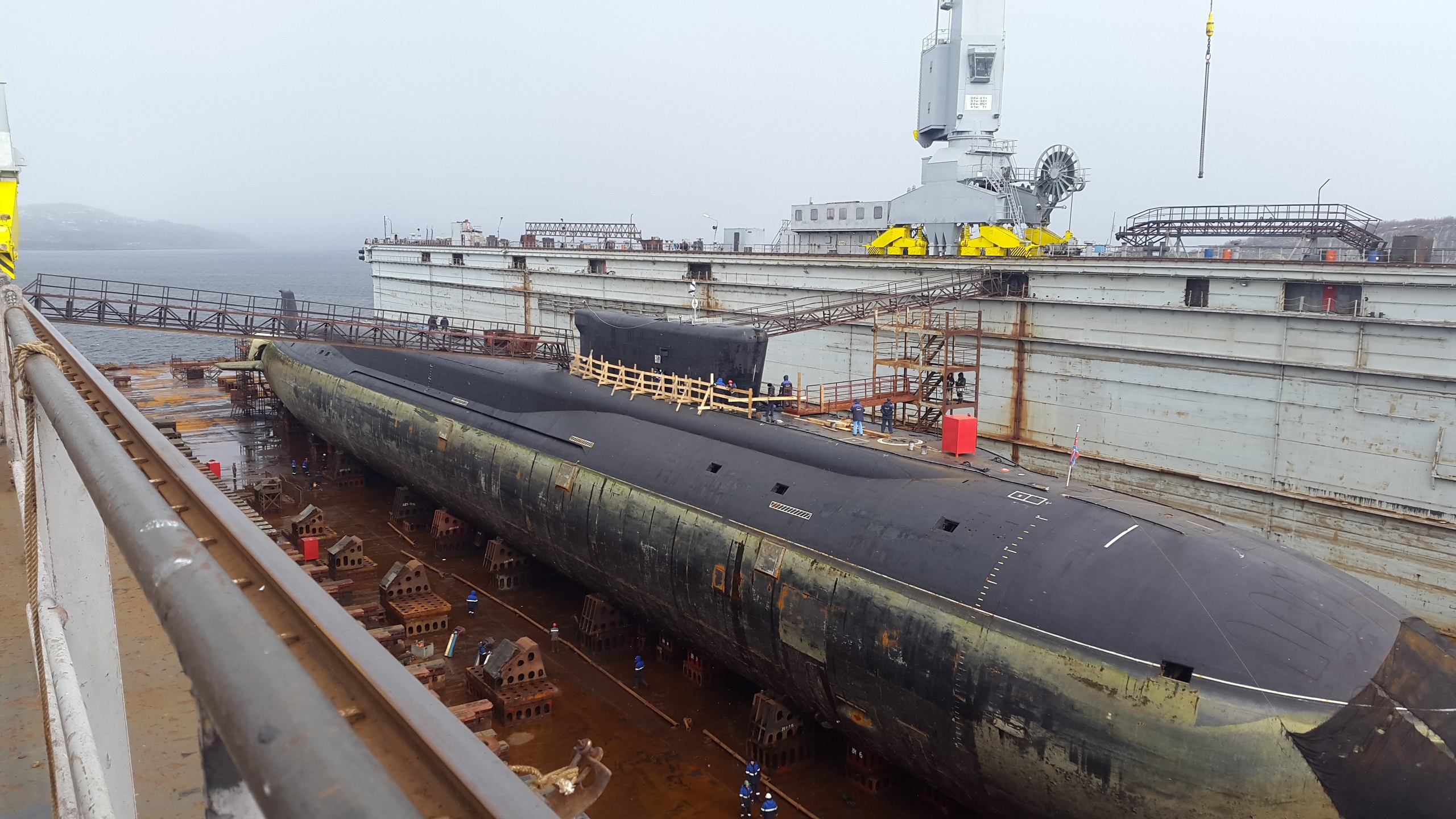 And this is Knyaz Vladimir

The fourth submarine of the Project 955A, Knyaz Vladimir, is expected to join the navy by the end of 2019. It will remain with the Northern Fleet, joining the first Project 955 submarine, Yuri Dolgorukiy.

Construction of Knyaz Vladimir began in 2012, it was floated out of the dry dock in November 2017.

The fifth Project 955/955A submarine, Knyaz Oleg, still appears to be in the dry dock at Sevmash, although it was expected to begin service in 2020. It will join the Pacific Fleet.

Nuclear submarine "Prince Vladimir" in 2019 will carry out firing Bulava

Compared to the first three Borei boats, inducted into the navy between 2013 and 2014, Borei-A boats are built with four additional missile tubes making them capable of carrying a total of 20 Bulava (RSM-56) ballistic missiles.

Why do these so called experts keep claiming the Russians want 20 missile launch tubes in their Boreis?

It made sense for Typhoon because there was no limit on how many SLBMs were allowed so if you had 6 boats then having 20 missiles in each... as opposed to say 12 or 16 meant you could have more missiles.

These days the max number of missiles is limited so there is no value in putting all your eggs in fewer baskets.

With 5 warheads per missile and 12 launch tubes you get 8.3 subs for 500 warheads... or more accurately with 5 warheads on each missile, with 8 subs with 12 warheads you get 480 warheads... which is about what they need. Replace a few of those 12 missile models with some 16 missile models and they will be close enough to 500... with the wording of the current treaty they only need to meet the numbers for one day anyway and when it expires the next day they can make as many as they like.
Arrow

The current in force arms limitation treaty limits each side to about 1,500 warheads wrote:

START expires in 2021. If there is no new START there will be no limits. That is why Putin is very afraid of the US leaving START. The USA has a lot of MIRV W-76 warheads in stock. It can very quickly increase its nuclear potential. Trident II transfers to 14 MIRV Mace to 6 MIRV with Throw Weight 3 times smaller than Trident II.After 2021, there will probably be no warhead limits. USA wants to withdraw from START
GarryB

So what if it does withdraw from new Start... making nuclear weapons is much cheaper than maintaining a very large conventional force.

I rather suspect considering all the new weapons they describe as doomsday weapons... like Posiden, and that nuclear powered cruise missile, that they will also be working on ever more powerful warheads to match.

Their work on miniaturising warheads should lead to improvements... a cruise missile with unlimited flight range might originally have had a 400Kt nuclear warhead, but as a doomsday device they could take that warhead out and replace it with a dozen or more tiny 2kt nukes that can be dropped as the missile flys along its way.

I doubt Putin thinks Trump is smart enough to renew the new START programme... it wasn't really the number limitations... it was the right of inspections and trading information that made it valuable... with no replacement for New START the Russians can do what they like and not have to declare anything at all to the west.

Those hypersonic Zircons and upgraded 3,500km range hypersonic Iskanders might have nuke payloads or they might not.
hoom

From recollection US actually shut down their Plutonium breeder like 20yrs ago...

But they've been many years behind on treaty obligations to permanently destroy a bunch of Plutonium, never even got round to starting building the facility vs Russia not just built their facility but finished 'burning' (as in used it to generate electricity) all the Plutonium they were supposed to several years back.

They'll still claim Russia failed to comply, that US has completely complied & its definitely Russia to blame for no START renewal, western bravely independant media will repeat that line without any evidence or questioning until everyone assumes its true