U.S. GMO has been in Russia de facto blacklist for quite a time. Now this is the final nail to the coffin.

Two massive circles in Poland and Litva, and these countries are well-known for anti-Russia sentiments.

Ironic. Countries where there are significant anti-Russia sentiments were actually doing a lot of business with Russia.

Disclaimer: I means no racial discrimination here, and sorry for the offence if any.

Not much into conspiracy theories myself... but there must be some reason anti Russian material and propaganda is so popular in these two countries... perhaps the goal was to shift the trade in favour of Europe in general or the US... it has clearly worked much better than they expected... but not the way they expected... instead of people in those countries changing their purchase choices, Russia has actively cut them off from their usual supplies.

I am sure Russia will find other sources of goods, but for the Polish and Latvians I suspect they will now have to break into new markets that they have not previously been a part of... wonder how the rest of the EU will enjoy the new competition... especially when they have lost their market in Russia too.
higurashihougi

Russian President Vladimir Putin has signed a decree that prolongs economic sanctions on some Western products from August of this year until the end of 2017.
A ban on importing certain agricultural produce, foods and raw materials from countries that have sanctioned Russia was first introduced in the summer of 2014. Moscow extended its counter measures in response to anti-Russia sanctions in June last year.

The latest decree, aimed at "protecting Russia's national interests," followed suggestions put forward by Prime Minister Dmitry Medvedev in late May. Medvedev tasked the government with preparing a package of measures that would potentially be in force until late 2017. The draft package was then introduced to the president.

Putin's decree says that the government may offer proposals to change the ban's terms "when necessary."
higurashihougi

After State Duma delivered the blow, now from the Supreme Soviet.

Russia’s Federation Council has approved a bill introducing fines for producing GMO products in Russia or importing them from abroad, with the exception of genetically altered organisms and materials used for expertise and research. Ordinary citizens caught violating the ban will have to pay a fine of between 10,000 and 50,000 rubles ($155 - $770) and companies will be fined between 100,000 and 500,000 rubles ($1550 - $7700).

Actually GMO has never been favourable in Russian agriculture for years.

According to official statistics, the share of GMO products in the Russian food industry has declined from 12 percent to just 0.01 percent over the past 10 years, with only 57 registered food products currently containing GMO. The law ordering obligatory state registration of GMO products that could come in contact with the environment will come into force in mid-2017.
ExBeobachter1987 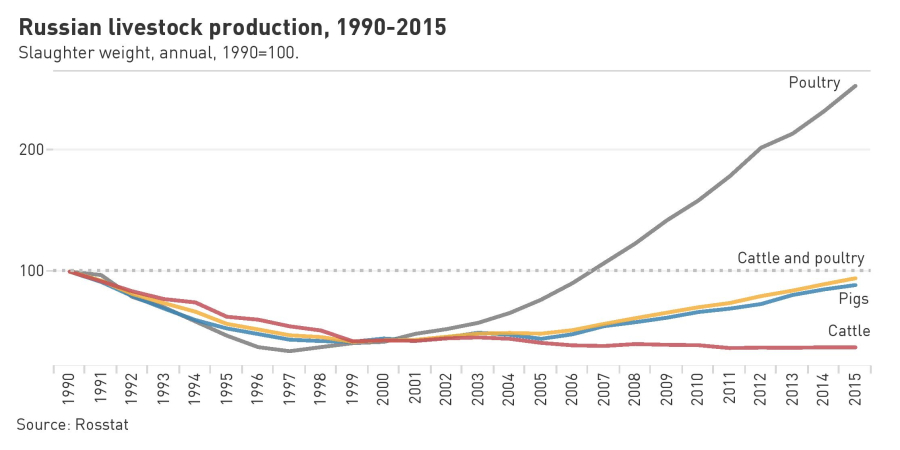 This chart is dubious since there is almost change in the production curves after 2014. There should be a distinct inflection point
due to sanctions. These curves look like some sort of extrapolations from 2013 based on the trends spanning back 2005. Otherwise
they are interesting and there is a long-term transition to local production in the last 10 years.

VYRUBOVO (Moscow Region), July 5. /TASS/. Russia may boost grain harvest to 130 mln tonnes and export to 50 mln tonnes by 2030, Agriculture Minister Alexander Tkachev said at the meeting of the governmental commission on Tuesday.

"The Agriculture Ministry has worked out a draft project of grain farming development till 2030, which implies grain production surging to 130 mln tonnes, which will push export up to 50 mln tonnes," he said.

According to Tkachev, grain is one of Russia’s key export articles as it accounts for two thirds of the country’s total exports.

Also, Russia's agricultural sector on the whole and its food exports, including grain, in particular, may become the backbone of the country's economy similar to the energy sector.

"Russia can export not only crude oil but it can also become the world’s leading grain exporter," Tkachev said.

The minister went on to say that Russia’s grain harvest may go up to 110 mln tonnes in 2016.

"At the moment this year’s rates are twice as big as last year’s as we’re planning to harvest 106 mln tonnes of grain, or even 108 or 100 mln tonnes in case of good weather," he said, adding that this will allow Russia to keep leading positions on the global wheat export market.

The Ministry plans to increase grain production to 120 mln tonnes till 2020.
Imports of wine materials may be taxed or banned

Tkachev considers it possible to introduce taxes or ban imports of wine materials.

"We’re currently preparing a draft decree aimed at increasing the duty on the one hand and on the other hand at sending a signal to investors that we’re going to close the market of imported wine materials in Russia within 5-7 years. For investors this will be an impetus for using home-produced materials for wine production," Tkachev said.

According to Amerkhanov, poultry production will total 6.6 mln tonnes, pork - 4.8 mln tonnes and beef - around 3 mln tonnes by 2020.

For the second year running, Russia is the world's top wheat producer with exports of 22.5 million metric tons of grain this year, according to the US Department of Agriculture.

Russia has won contracts to exports 120,000 tons of wheat to Egypt. In the fall, as soon as the new crop is harvested, Russia will start supplying wheat to China, according to the Agriculture Ministry.

The country’s leading position in the global wheat market is because of its low-price strategy which has increased its market share.

The weakened national currency, favorable weather conditions as well as more investment has pushed forward Russian agriculture and unseated the US as the world’s biggest wheat exporter.
higurashihougi

After a long break Egypt returned to purchasing wheat from the global market in mid-July. French, Canadian, Polish, US wheat shipments were rejected due to an ergot content over the internationally agreed level.

Not really Russia, but I still put it in here.

"Belarusian potatoes, not for sale to U.S.A and E.U."

Good news. But they just had to insert the ludicrous nonsense about hard currency at the end. F*ck off Bloomberg. The ruble is a fully floating
currency and is as hard as the US dollar.
higurashihougi

The first ship with 64500 tons of corn to Vietnam has departed from Novorossiysk.


2) Russian Agriculture Minister Aleksandr Tkachev said on Tuesday the country’s 2016 harvest of grain and leguminous crops is the highest since 1978.

2016 is a banner year for Russian agriculture

MOSCOW (Sputnik) — Moscow first introduced a ban on certain food imports in August 2014 in response to economic sanctions imposed by the United States, the European Union and their allies over Moscow's alleged participation in Ukraine crisis.

In late June, the European Union extended the sanctions imposed against Russia. Moscow, in turn, prolonged the food embargo. "The consumer is interested in getting good-quality products at the least possible price, so we need to create competitive conditions. So we will be dragging out as long as possible," Putin said at an All-Russia People's Front forum.

This is great for both sides since Russia needs to reduce overall inflation on foods, especially on foods that grow well in Syria, while Syrians need money. This creates a good prospect for business in agriculture between the two. Also some hints to other deals in form of energy (oil/gas) and transportation. There is also a $1 billion dollar previous contract for reconstruction in Syria
higurashihougi

Putin: Russia's ban on Western foods will last 'as long as possible'
higurashihougi


Russia has made considerable progress in developing its agricultural sector and is a major player in the world agricultural market, according to the head of the United Nations’ Food and Agriculture Organization (FAO) Jose Graziano da Silva.

Problem is there already is a 'Russian' cheese, and it's very popular.
miketheterrible

Guess they ran out of names for cheese. Although, news states it currently doesn't have a name thus dubbed Russian cheese.
higurashihougi

Russia produced $4bn worth of food since banning Western imports


According to Medvedev, the measures were introduced to stimulate domestic production, and many Russian companies have been asking the government to keep them.

I imagine in the coming years, with the seclusion of various northern locations harder to get to, should be good locations to start greenhouses and other forms of indoor gardening, in order to meet the demands of these regions, even reducing costs/prices.
Sponsored content