As reported by Asian Defence Journal, the failure of the contract to supply Greece 450 BMP-3 to 1.2 billion euros was the result of U.S. actions. Initially, the government of the ruling party (Panhellenic Socialist Movement) declared the continuity of the course on the implementation of the agreement with Moscow.  However, after the March visit of Prime Minister George Papandreou in Athens changed the U.S. position on the opposite, adopting a proposal to buy second hand Bradley at a symbolic price.

According to the magazine, at first glance, the proposal seemed so favorable that the Greeks could not ignore it.  Upon returning premier unit head of the government handed it to the Ministry of Defence, which in secrecy, sent in to the "graveyard" of armored vehicles in New Mexico, a special delegation of the most senior military officials.

When sent to the New Mexico delegation returned, she released a report on the compliance needs of Bradley There were rumors that the interest of the Greek army commanders limited to amphibious Bradley.

Definition appears at the end of April 2010, when the enlarged meeting of the Greek Ministry of Defense just before the visit of the Minister Evangelos Venizelos in Moscow, the commander in chief of land forces suddenly began to talk up American cars. Contract for the BMP-3 has been almost signed, when a few days later in Moscow, the minister, showing exceptional diplomatic skills, called on Russia to enter into a difficult economic situation in Greece and begin negotiations on a BMP "from scratch". The Kremlin has expressed displeasure and began to wait patiently for the Greek Defense Ministry a new invitation to tender, which Venizelos promised to send within 15 days.

Without waiting for an invitation to Moscow, which had already had a clear idea about the U.S. proposal, sent a special envoy of the Pentagon, where he encountered face to face with the Greek ambassador [as in the text of the publication - ca. П.2]. A.2]. In the memorandum to Ambassador Hronopulos reports that during this meeting, among other things, said Russian representative: "Greece is no longer feels the need for any further steps were to meet Russia!"

As summed up the magazine, citing sources in the Russian defense industry, for beushnye Bradley Greeks in the aggregate up to repair and re-pay about as much as the cost would be new Russian infantry fighting vehicles, and American cars may soon be left without repair and maintenance, because they do not remain parts.

That would be the very first model with the floatation screens like those fitted to the Sherman tanks in D-Day.

I feel sorry for the Greek soldiers who have to operate those vehicles as drownings are likely.

And their base armour is not great.

The huge irony is there are gaps in performance of most operational weapons.
Small arms can be stopped by a decent thickness of armour, but it takes a step up of armour thickness and design to stop light automatic cannon rounds. It takes a further step up to stop RPGs.

The thing is that the extra armour of the later Bradleys to stop cannon rounds including 30mm APDS rounds added several tons to the vehicles weight... up to about 32-33 tons which cost it any amphibious capability whether it had screens or not.

This means that while the BMP-3, with its spaced armour that will stop armour piercing 30mm rounds fired from 300m this particular model Bradley is not safe from the BMP-3s 30mm cannon.

On a tangent I wonder about the talk of development of the BMP-3 design with the UAE, on the Wiki page it mentions the addition of Kaktus modular armour and a new more powerful engine.

Now you an I know that Hermes is primarily a long range ground attack missile that is compatible with Pantsir-S1.

Perhaps a tracked version will be used in medium and heavy brigades and the wheeled truck mounted model is for the light brigade or as a seperate unit that can be attached to the various brigades in support.
Vladimir79

Thats funny considering it was Greek economic situation which put all major deals on hold. FREMM, new fighters, and BMP-3 could not be signed as they had to reduce their deficit to get the EU tranche loans.
Hoof

funny how US can screw everyone by threatening to sanction them because they buy something from other country... only things come to mind is greed... kinda like "hey, if you wont buy our stuff at our prices, you wont buy anything, cause we wont let you..."
arpakola

the first S300 fired and tested by a NATO country (Greece) 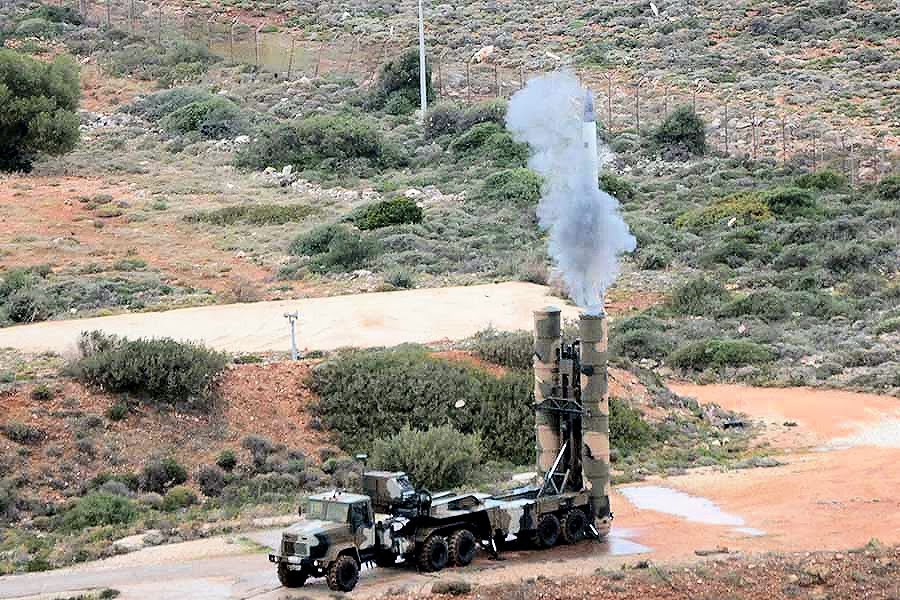 We have discussed about it already but nevermind that now. What is interesting is that this was the first time Greeks decided to fire S-300 since they got the system 15 years ago.

That is important because expected missile life in tubes for S-300PMU1 is 15 years. It worked flawlessly

Greek Defense Minister Panos Kammenos said that Greece will purchase new Russian arms to replace the old one and procurement will be limited.

"What we will be doing right now and what we will be promoting is the maintenance of the weaponry systems which we have already bought, such as S-300, Tor-M1 and Kornet," Kammenos said on the sidelines of a conference on global security in Moscow.

"Our arms purchases will be limited to procurement of new ammunition to replace the old one," he added.

The minister also expressed hope that the EU sanctions regime against Russia would end soon, so that Athens and Moscow "could continue with other agreements."

Last year, the United States and the European Union imposed several rounds of sanctions on Moscow targeting several sectors of the Russian economy, including defense, banking and energy.

Greece is the only NATO member state that has the Russian-made S-300 long-range surface-to-air missiles systems in service. The Greek military successfully test-fired the air defense system for the first time in 2013 after buying two batteries in 1999.

The Greece Army also operates at least 25 Tor-M1 air defense systems, and has some 200 launchers and over 1,100 Kornet anti-tank guided missiles.

Greece is close to default - there is no money for pensions let alone military hardware. Even if they avoid a default (and it can go either way right now) they have more pressing needs presently. Political governance is shaky and new elections could take place sooner rather than later if there is a default...followed by unprecedented social unrest as they scramble to introduce a new currency or their old one all the while dealing with an exit from the EU. A rather tough road awaits these poor people whatever happens over the coming few weeks. Weapons should be the last thing on their mind right now.

Even if Russia were to lend it the money, she will be a long time waiting for any return - the country broke, in every sense.
George1

Contracts on the support of Russian air defense systems in Greece

According to the Greek web resources, February 7, 2017 Greece's defense ministry has signed with joint-stock company "Rosoboronexport" contracts worth 16.6 million euros for the technical and service support and spare parts for anti-aircraft missile systems produced in Russia, consisting on ground forces and Greek Air Force - 9K33M2/M3 "Osa-AK/AKM, 9K331 "Tor-M1" and S-300PMU1. The contract is for three years (2017-2019).

It is reported that the allocation of funds under this program was authorized by the Greek Parliament in the autumn of 2013, but the actual appropriations have been allocated only now, as the signing of the relevant contracts with the Russian side was hampered due to bureaucratic problems and the Greek "Personnel reshuffle" in the Greek Ministry of Defense.

It should be noted that the contracts with the Greek Ministry of Defense, "Rosoboronexport", apparently, are a violation of European Union anti-Russian sanctions.