Crazy thing is, those robots would come really handy in VDV. Dropping them right behind enemy lines, where enemy fire can come from any direction and the battlefield is non stop fluctuating, they could secure landing areas for paratroopers.

Additional armor protection is in place i guess as vehicle is crewless.
Zivo

Regarding the heavy payload, we need to keep in mind that although initially they will be remote controlled from a command vehicle, in the near future, they will be operated by artificial intelligence. By removing combat rolls and creating a system of equality, the AI will be able to function more effectively as it will have one less tactical variable to consider. It's just far easier for AI to react, than to predict and form plans.

That turret is quite over the top , i would skip all but the 30mm and 7.62 as it would save a lot of complexity and cost. But would add some armor for urban fight.

That seems to me to be the standard turret fitted to the Armata APC and Kurganets APC and Typhoon APC and Boomerang APC... it would make perfect sense to fit it to the unmanned version of any existing vehicle... BMP-3 or T-55 as it is already designed to operate as an unmanned turret with no human loader or gunner.

When Kurganets IFVs and APCs become available in numbers what are you going to do with all those manned BMP-1s, BMP-2s, and BMP-3s?

It is like having the SV-24 bomb aiming system allowing the use of older munitions effectively, but with ground based armoured vehicles.

Having ATGMs and SAMs it can engage a much wider variety of targets without support which makes them more autonomous and effective in their role.

20 years ago I would have said mounting a SAM on such a robot would be an expensive waste of time, but with Verba and Igla-S perfectly able to take down UAVs and the proliferation of UAVs and UCAVs then it actually makes rather more sense now. The ATGMs will be a mix of HE and HEAT warhead Kornets which gives extended range capabilities against a wide variety of air and land based point targets... the 30mm and MG will provide most of the likely fire support however... even just its optics and sensors for finding targets and communicating to HQ will make them useful.
AK-Rex

Robotroops: Russia to Roll Out Robot Fighting Force by 2025

A new generation of robots is due to be put into service by the Russian Armed Forces in the coming years, media reports said.

State-of-the-art Russian military robots are currently undergoing tests and will enter service in the next few years, Sergei Popov, head of the Russian Defense Ministry's scientific research and robotics center, was quoted by RIA Novosti as saying.

Oldie but didn´t see this here:

United Instrument Corp: controlled the power of thought combat exoskeletons are being developed in Russia

MOSCOW, January 30. /TASS/. The development of military exoskeletons, which will be managed by the power of thought, is based in Russia. This was reported TASS the head of development and production of medical equipment United instrument Corporation (OPK, is rostec) Alexander Kulish

Conference "The Robotization Of The Armed Forces Of The Russian Federation"

As reported by the Foundation for advanced studies, 10 February 2016 on the basis of Military-Patriotic Park of recreation and culture of the armed forces "Patriot" in Kubinka held an open military-scientific conference "the Robotization of the Armed Forces of the Russian Federation". Its purpose was to discuss the organizational and technical and regulatory issues related to robotics, the army, as well as the exchange of experience on creation and operation of robotic systems (RTC).

The event was attended by representatives of the Military-industrial Commission of the Russian Federation, the Ministry of defense of Russia, EMERCOM of Russia, MIA of Russia, Foundation for advanced studies, Russian Academy of Sciences, FANO, public corporations and other stakeholders. In the framework of conference the exhibition of promising RTK.

Opening the plenary session of the conference, the head of the Main Directorate of research activities and technological support of advanced technologies (innovative research) of the Ministry of defense (GUND) Alexander Mironov reminded those present that the decree of the President of the Russian Federation from December 16, 2015 No. 623 resolved to establish a national centre of technology development and the basic elements of robotics, ensuring the implementation of functions which are entrusted to the Foundation for advanced studies.

Among the priority directions of science, technologies and technics in the Russian Federation included the establishment of the "robot-technical complexes (systems) of military, special and dual purpose".

"Significant event" called the Decree of the President of Russia on creation of the National center for robotics member of the Board of the Military-industrial Commission of Russia Oleg Martyanov, noting that "the main work is still ahead". He thanked the audience for their contribution to the common cause, stressing that the achievements are the result of joint efforts. "We would like in the future to openly discuss many issues of development of advanced models of CRC. The issue of creating a public access center for technology of robotics in the emerging National centre. Topical issues of standardization and unification in the design and manufacture of the RTC. They will become a priority for us in 2016", - said O. Martyanov.

Enumerating the advantages of the prospects of robotics army (reducing loss of strength, lack of exposure to robots, fatigue and stress etc.) acting Deputy Chairman of the Military scientific Committee of the armed forces of the Russian Federation Vyacheslav Shestack noted the need to improve the quality of research and development work in the field of development and creation of RTC, which requires strong inter-Ministerial coordination. According to him, for these purposes, the defense Ministry has already signed a number of bilateral cooperation agreements, the first of which was an agreement with the Foundation for advanced studies.

Deputy General Director – head of physico-technical research seed Fund and Igor Denisov informed the participants about the progress on the formation of the National centre of technology development and the basic elements of robotics.

"We have entered the era of network-centric actions and network-centric operations, as new forms of warfare. The traditional struggle between the States our eyes may turn into a war between artificial intelligences, which will have a data state. And we still have to overcome a certain gap with the leaders", - noted in his speech, the Deputy chief of Military Academy of the General staff of the armed forces of the Russian Federation for scientific work Sergey Charkov. According to him, it needs to be done including the strengthening of interaction that VA GSH of Russian armed forces are already successfully implementing the Foundation for advanced studies, Lomonosov Moscow state University. M. V. Lomonosov Moscow state University and MGTU im. N. Uh. Bauman. For example, in 2015, in conjunction with the Fund was held the first competition of scientific works among the permanent and variable composition of the Military Academy. The results were so successful that the competition decided to make an annual event. 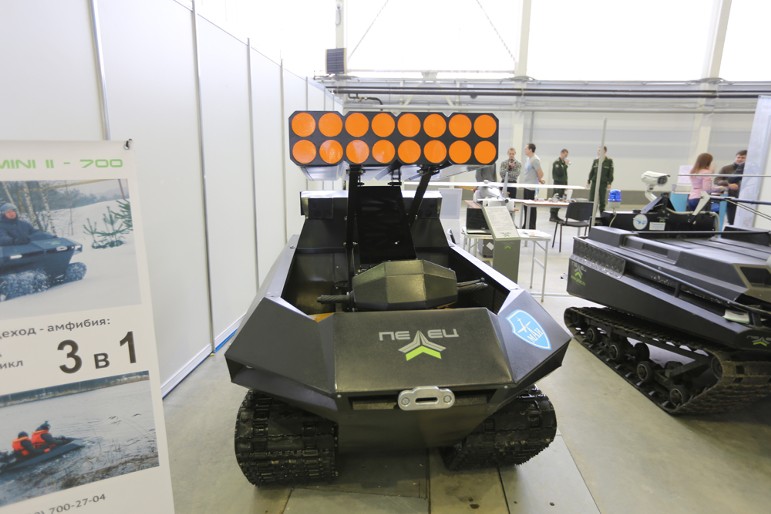 Some sort of exoskeleton being tested

Yeah i posted it earler today, it seems its part of movie prop
zg18

Yeah i posted it earler today, it seems its part of movie prop

Thanks for info!
zg18


"
MOSCOW, 20 Feb — RIA Novosti. The advanced research Foundation in Russia have created two layout battle humanoid robots "Rescuer", told RIA Novosti in the Fund.
"It's fighting robots dual-purpose, for work in hazardous to health and life conditions: the radioactive environment, debris and the like. Primarily practiced on mock-UPS of new technologies, their use to other technological platforms in the framework of the National centre of technology development and the basic elements of robotics, activities to ensure functions assigned by the decree of the President of the Russian Federation on the Foundation for advanced studies", – reported in the DCF.
So, the first model of the torso is designed for practicing subtle manipulations in replicating and Autonomous control modes. The second humanoid platform layout is designed for practicing systems of balance, step, and complex coordination of manipulators.

"Remote control platform is the control of a suit that reads the fine motor skills of the neck, shoulders, forearms, wrists and fingers. This creates a "presence effect" of the operator at the place of anthropomorphic platform", – noted in the Fund.
In addition, automated programs ensure the maintenance of balance, parrying a collision, move to a given target or for a given route with a separate bypass or overcome obstacles. When falling, the robot stands up independently.
Development centre of robotics created by the Fund for advanced studies by the decree of the President of the Russian Federation on 16 December 2015. The Fund was established in 2012, by analogy with the U.S. Agency DARPA, which is responsible for the promotion of innovation in the U.S. Armed forces. Today the Foundation runs more than 50 projects, they created 35 labs in leading universities and research institutes of the country.


wish they send a few units to Syria for trials

OK, remember in the earlier videos when that RPG tube flies off the mount, which kind of looks like it broke? Well in these you can see that it's designed to eject the expended tubes immediately after launch. So it worked as intended.

Zvesda has been holding out on us!


What is that on the back of the turret? Looks to me like a directional transceiver.
Zivo

Well it looks too recessed to be a radar or some sort of EO device. So your suggestion is probably correct.
medo

I hope those Uran-9 robots will soon go in armament. They are really promising and well armed to do different tasks simultaneously. Army unit could use them in exposed positions to do anti tank and air defense tasks and at the same time cover infantry without exposing lives of soldiers. They could be as well used in extreme environment like in NBC contaminated or in harsh Arctic conditions, where they could hold and defend positions while their crews are in safe place to control them.
medo

Well it looks too recessed to be a radar or some sort of EO device. So your suggestion is probably correct.

Turns out it is a radar, in the full video it is seen rising up to look forwards over the turret.

This thing is armed to the everything.
x_54_u43 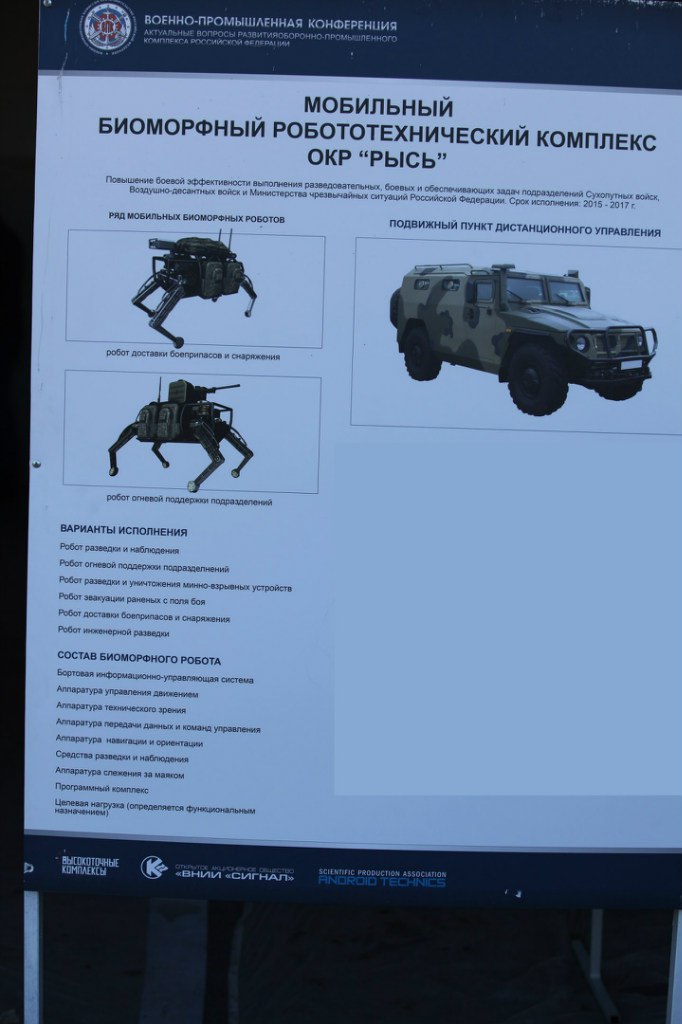 Man, I need to sort through the 500gb of military info on my hard drives. Who else knows what I have in there.
x_54_u43 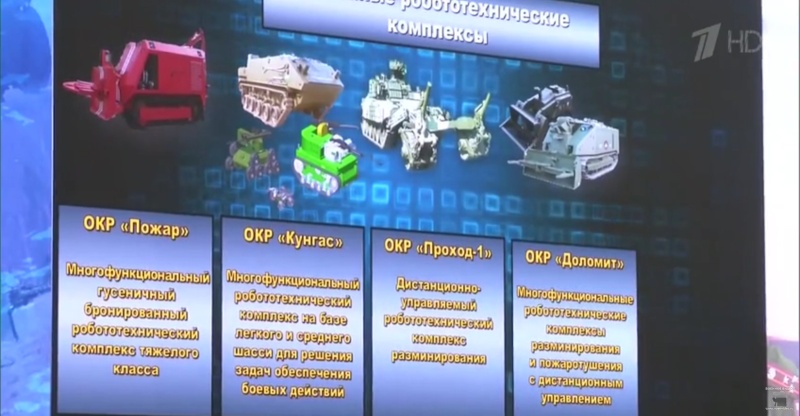 Exactly what I thought, maybe they are developing their own version. Would be really cool to see though, we get a machine gun on ours.
Sponsored content