Chicks in the fall believe, as the Russian proverb says. So it was in the previous two articles on the combat composition of the Mi-24 army aviation of the Kiev junta.

This time there is no sense in pulling the rubber, and the emphasis will be slightly changed. I will try to cover the whole available composition of "crocodiles". A recently released report on arms exports in 2016 showed the absence of shock helicopters in it. I do not think that the demand for second-hand at low prices dropped - just sellers somehow fell and crushed, nothing can not offer anything. No, there's a lot of trash, but a whole year has passed since the last transfer to UkrRichmaht of three "modernized" Mi-24PU1 and there has come a lull. True, there was another case, but about it a little later.

As always, I'll start with the history of the issue. Different sources report a different number of machines that were given to dill in 1992.

The most detailed combat composition is designated as:

The command of the Armed Forces of Ukraine has announced a tender allowing to estimate the number of combat aircraft.

US commented on the death of its pilot in the crash of the Su-27  https://news.rambler.ru/usa/41054670/?utm_content=rnews&utm_medium=read_more&utm_source=copylink 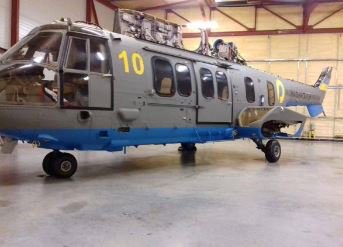 They could have saved a lot of $ instead by maintaining mil. coop. with Russia- Mi-17s could be exchanged for Ukrainian made helicopter engines they were exporting before. Now they will lose more $Bs on gas pipelines bypassing them.
These helos (21 on order) may end up in Russia's hands eventually.
https://en.wikipedia.org/wiki/Eurocopter_EC225_Super_Puma#Civilian_operators

These helos (21 on order) may end up in Russia's hands eventually.

Hope not... because for them to fall into Russian hands means it is also in Russian hands to revive and resuscitate the Ukrainian economy... let America or the EU do that... they fucked it up in the first place...

What would they do with Super Pumas?

..in Russian hands to revive and resuscitate the Ukrainian economy..

They'll give incentives to Russian & foreign businesses/investors, open special economic zones, etc. The RF economy can't be compared to the 1 in Ukraine.

What would they do with Super Pumas?

They'll give incentives to Russian & foreign businesses/investors, open special economic zones, etc. The RF economy can't be compared to the 1 in Ukraine.

For Russia to be involved, the west would have had to have left... and considering we are talking about real estate on Russias border we can assume rather than left it was forced out.

For this to happen that would mean even more sanctions on Russia and any foreign business or investor that tries to help the Ukraine.

Look to what is happening in Syria.... Russia is fighting terrorists that attacked the US and Europe and Russia, yet the US imposes sanctions on Russia for supplying oil for heating and cooking in Syria for people in areas held by the government forces.

Two countries voted against a bill in the UN that banned the glorification of nazism... the Ukraine and the US... a match made in heaven perhaps?

The Ukraine is a sinking ship and the US and EU is drilling holes in the ship below the waterline to let the water run out so it will float again...

Most of the Ukraines trade wealth came from Russia and they have pretty much cut that off... it was a suicide.


Their specs r similar to the Mi-38, so they could be used as utility/multi-role or sold/given to other operators:

For Russia they are very inferior to the Mi-38, they have non standard parts that are also not compatible with anything else they operate... to give them away would be to get another country to use a competitors hardware...

The best use for Russia would be target practise and selling spare parts to existing customers at a greatly reduced rate to undermine sales for the original maker.

Russia is still the biggest investor & trading partner in Ukraine.
Pumas could be used until the spares run out & then sold for parts, if new parts & engines can't be obtained/produced. BTW, Russia operates & plans to produce other foreign designed helos:
https://www.rbth.com/science_and_tech/2015/05/25/us_bell_helicopters_to_be_assembled_in_russia_despite_sancti_46327.html
JohninMK

Ukrainian Ministry of Interior has taken delivery of the first two
H225 helicopters on 21 December.

According to a Airbus’s statement, one aircraft is destined for search and rescue missions and the other one will be operated by the National Guard for law enforcement missions.

The H225 helicopters were repurposed to suit these public service missions in just over three months. Another two H225s will join the fleet in the coming weeks.

Ukraine signed a contract with Airbus Helicopters for the purchase of 55 new H125, H145, and H225 helicopters to be used by the Ukrainian National Guard (UNG), as well as by government and law enforcement agencies.

“Further to the Intergovernmental Agreement signed between Ukraine and France earlier this year, we are pleased to be celebrating the first deliveries. This Agreement for 55 helicopters enables Ukraine to provide its population with a complete range of helicopter services from search and rescue, emergency medical services, firefighting to law enforcement missions,” said Arsen Avakov, Minister of Internal Affairs of Ukraine. “Thanks to the excellent operational cooperation with Airbus, we will also set up a local training and maintenance centre in Ukraine to support our new modernized fleet of helicopters” he added.

“We are pleased that these two H225s have landed in Ukraine in a record amount of time. Now that the pilots have completed their H225 certification training in France, Ukraine can immediately take advantage of the excellent payload and range that the multi-purpose H225 offers along with the aircraft’s state-of-the-art autopilot that provides precision while reducing crew workload in the most demanding mission conditions,” said Matthieu Louvot, Executive Vice President for Support and Services at Airbus Helicopters who attended the delivery ceremony in Kyiv. “One of the next steps is to accompany the Ministry of Interior in setting-up a dedicated training and maintenance centre for the helicopters in Ukraine,” he added.

The first deliveries have taken place in the frame of the Intergovernmental Agreement contract signed in July 2018 for 55 aircraft – 21 repurposed H225s, 10 brand new H145s, and 24 H125s, all aimed for search and rescue (SAR), EMS and other public service missions.