t is supposed to say it has three warhead type options... light, medium, and heavy and it carries about 20 of them... wrote:

No they clearly write about throw weight

Do you have no shame? Is there no end to your idiocy?

This guy is trolling. Pure and simple.
GunshipDemocracy

No they  clearly write about throw weight

where precisely this was stated? I cannot find anything like that there. Can you copy this fragment in original?
BTW R-36 has payload max 8,8 tons not throw/weight. UR-100N has 4,35tons.
LMFS

MOSCOW, April 11. /TASS/. The heavy intercontinental ballistic missile Sarmat is in the final testing phase. The hypersonic system Kinzhal and laser system Peresvet have entered combat duty, Russian President Vladimir Putin said on Thursday at a meeting with senior officers and prosecutors on the occasion of their promotion.

Putin recalled the "large-scale systematic work that has been conducted in recent years to comprehensively develop the army and provide advanced military hardware for the armed forces."

"The missile system Avangard with a hypersonic glide vehicle will considerably enhance the ICBM potential," Putin said. Also, he said that "the final tests of the missile Sarmat are proceeding successfully and the system Kinzhal and laser system Peresvet have entered combat duty."

Ministry of Defense will hold two launches of Sarmat missiles

MOSCOW, May 30 - RIA News. The Defense Ministry in 2019–2021 intends to conduct two launches of Sarmat intercontinental ballistic missiles, three launches of the Yars and four Topol-M missile systems, follows from the procurement materials of the defense department.
According to the documents, a tender is being held for liability insurance for causing harm to the life, health or property of others in four launches of the RS-12M ICBM (Topol), three RS-24 ICBMs (Yars) and two RS-28 ICBMs (Sarmat ").

The characteristics of the Sarmat ballistic missile have become known. 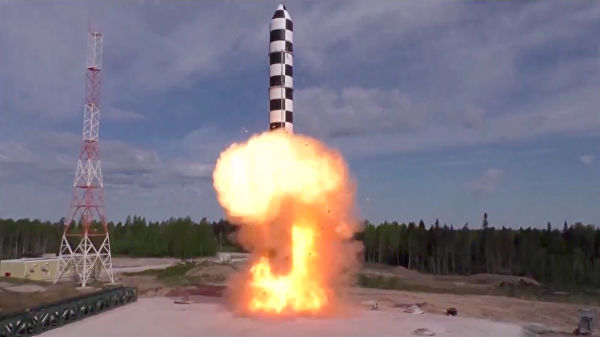 At the Army-2019 forum, for the first time, the main tactical and technical characteristics of the latest Sarmat intercontinental ballistic missile were uncovered, RIA Novosti reports.
According to the brochure presented in one of the exhibition pavilions open to the public, the firing range of the Sarmat is 18 thousand kilometers, the starting weight is 208.1 tons, the payload mass is less than 10 tons.

The mass of fuel is 178 tons, the length of the rocket is 35.5 meters, and the diameter is 3 meters. The type of warhead - a separable warhead with blocks of individual guidance (MIRVI).

wikipedia based on US scientific charts.. says the Russian sarmat nuke
with a 10 ton throw weight , can be armed with a single nuclear warhead from 50-60 megaton.  Which is pretty descent.. much more than what US military can achieve.
Considering US biggest nukes are Tridents 2 of 5-6 megatons only..

So Russian sarmat can hit as hard as 10x trident missiles.. which is pretty descent.
and about 150x times times more powerful than the amateur nukes Israel have in their
latest Jerico 3 intercontinental missiles.. estimated at just 400kt nuclear warhead..
Only Thing Russia needs to do is mass produce them.. replace all their Satan 1 missiles with Sarmats.. and it will be ready so send to the stone age literary any hostile country..
every inch of its territory.

To wipe a country like Israel ,a state that most of it is empty.. Any "small" nuke of 20kt in a commercial city , will be enough to finish Israel as a functioning nation. you nuke one city ,lets say an economic zone ,like Telaviv and everyone else in the country ,will not want to stay there , waiting for more attacks... will just pack and leave.
The radiation fallout and the psicological impact of the attack ,will finish the rest of the country.. if destroy a nuclear reactor.. it will be chernobille part 2..  Not many people , Scientist and business with families and children will want to live in a place that was nuked and radiation get people ill and with cancer.. this is more true if the attacking country and the victim never restore relations ..  Japan could only move forward because US and Japan restored relations after a complete surrender by later.. and so confidence in a better future was not lost..

Take Sarmat into service in 2021

The Russian Ministry of Defense will begin carrying out flight design tests of the latest liquid intercontinental ballistic missile (ICBM) RS-28 Sarmat in early 2020, a person close to the Ministry of Defense said and confirmed the manager of the defense industry enterprise.
The initial stage of testing involves two missile launches with a mass-scale mock-up of the warhead from a mine installation at the Plesetsk cosmodrome along the Kura training ground in Kamchatka, one of Vedomosti’s interlocutors said: at least five launches are planned.
And after working out the Plesetsk-Kura route, the military will conduct a test launch from the position area in the Krasnoyarsk Territory for the first time since 1987, where the 62nd Strategic Missile Forces missile division is stationed, he knows: “Subject to the required characteristics, this missile system will be put into service in 2021.” The Ministry of Defense did not respond to the request

The US BS estimate is clearly based on Tsar Bomba. Because there is no technological progress in Russia since the 1960s.

Americans are retards since they talk, walk and think like retards.