But still if you look at Market share US has 29% meanwhile Russia has 27% followed by China at 3rd place pipping Germany with 7-8% International weapons market share.


I've shared it already in How Russia+China catching to US thread.
George1

It's simple. USA has cordial relations with a number of developed countries which can spend more on arms. Think only theor NATO allies
Guest 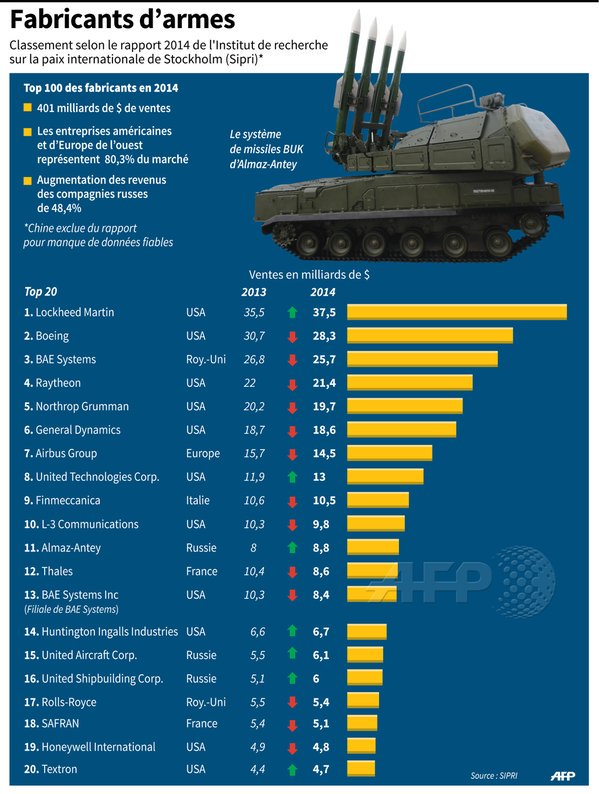 List of some of the biggest military companies and their sales. 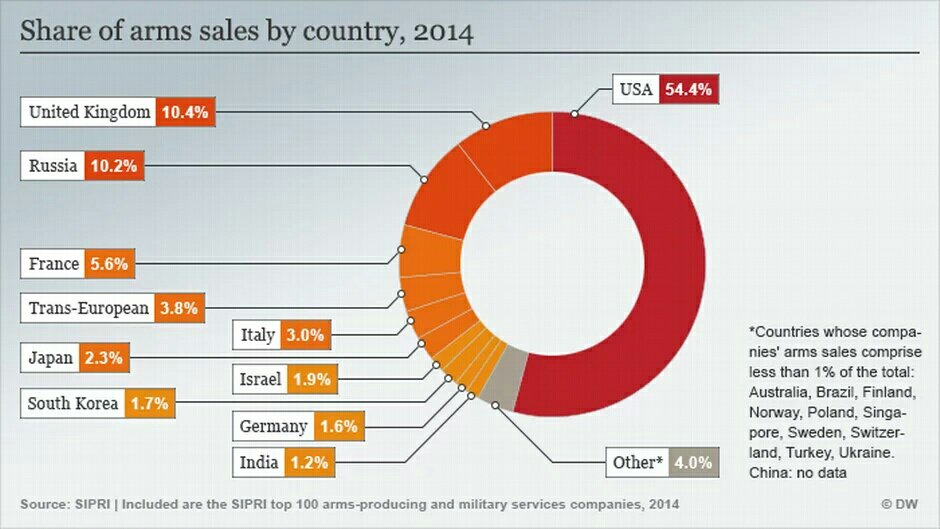 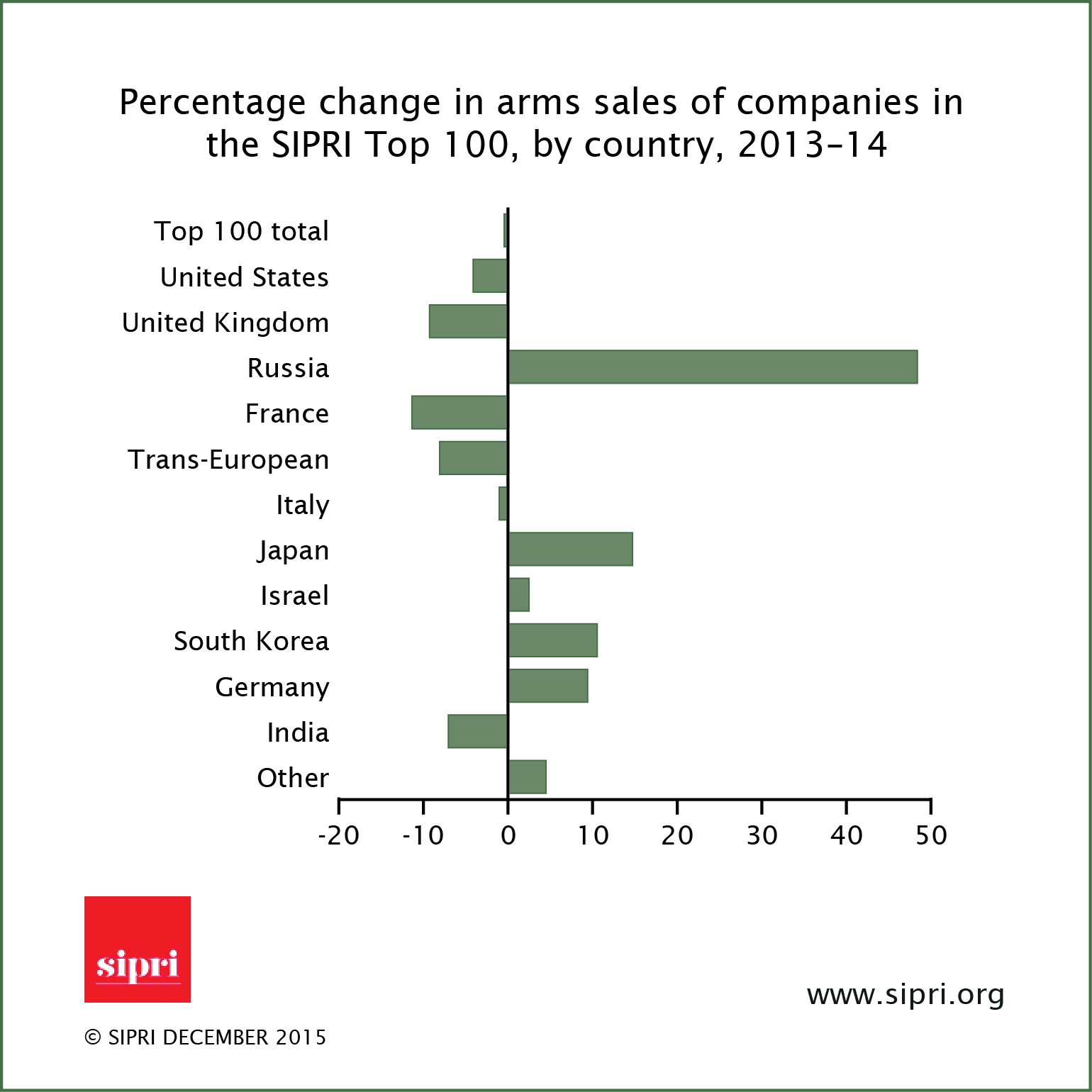 "In regard to the contracts portfolio, as of today it is more than $54 billion," Anatoly Punchuk told RIA Novosti in an interview on the sidelines of an arms exhibition in Chile.

Russian President Vladimir Putin has added information on government policies in the area of military-technical cooperation with foreign countries to the list of state secrets, according to a decree posted on Tuesday of the government's legal information website.

MOSCOW (Sputnik) — The document assigns the responsibility for managing such information to the Foreign Ministry, the Defense Ministry and the Federal Service for Military-Technical Cooperation.

According to the new decree, "the unauthorized and premature dissemination of information on certain actions aimed at the implementation of government policies in the sphere of military-technical cooperation could harm Russia's national security."

Russia signs export defense contracts worth over $9 bln in 2016

"Russian contractors engaged in military and technical cooperation signed contracts worth over $9 billion in 2016," Shugayev said as he spoke in the Russian Foreign Ministry’s Diplomatic Academy on the topic: "Russia’s Military and Technical Cooperation with Foreign Countries."

In 2016, 55 sessions of inter-governmental commissions, committees and working groups on the issues of military and technical cooperation with Russia’s foreign partners were held, he added.

The work to develop comprehensive post-warranty services for supplied arms and also to set up and re-equip maintenance centers on the territory of foreign customers is an important area of military and technical cooperation, he noted.

"Today this is an essential requirement set to the producers and suppliers of military products," he said.
18 international agreements

Russia signed 18 international agreements in the sphere of military and technical cooperation last year, according to Shugayev.

Shugayev noted that Europe was number four on the list of Russian military export recipients in 2016, while Asian countries held first place.

"On the 2016 list of the world’s regions that receive Russia’s military export products Asia was number one with 53%, Africa, second with 42%, North and South America with 3% and Europe 2%," Shugayev said.

Contacts with the Philippines were on the ascent.

You have to put things in perspective too...

If I export diamond rings and sell two rings for a million dollars each in one year, then comparing that to someone selling cheap rings for $150 each who sells ten thousand a year... am I really the bigger exporter of rings, or am I just making the most money?

I have seen dollar value comparisons but when the US oversells stuff to Arab countries who are actually buying protection then the numbers will always be wrong.
franco

GarryB wrote:You have to put things in perspective too...

If I export diamond rings and sell two rings for a million dollars each in one year, then comparing that to someone selling cheap rings for $150 each who sells ten thousand a year... am I really the bigger exporter of rings, or am I just making the most money?

I have seen dollar value comparisons but when the US oversells stuff to Arab countries who are actually buying protection then the numbers will always be wrong.

Was thinking something similar when I posted as I wondered what the total units delivered comparison would actually be?
GarryB

The recent sales to Saudi have been not just at gold plated prices, but solid gold encrusted with jewels prices, which really must skew the numbers badly.

Of course to get the US and west to look the other way with what they are doing in Yemen they needed some way of paying big money into a few peoples pockets...
Kimppis

IIRC, they don't even list Chinese companies (because they don't have enough information available on them, or something), which already makes it a joke.

Yeah, what exactly are even included in those Saudi and other Arab arms deals? The amounts (of dollars) are insane. Star destroyers? 10,000 Abrams? 1000 F-35s? I'm honestly crious. How do Saudis even keep that shit operational? (Yeah, I know the answer: they don't.)
George1

The Vesti 24 TV channel posted a very interesting interview with Russian Presidential Aide Vladimir Kozhin on the MTC of Russia. A number of his theses are of unconditional interest.

So, it is reported that the cost of deliveries in 2017 was 15 billion $, the cost of signed contracts was 16 billion $, the portfolio of orders reached 45 billion $. But it seems that the most interesting is relateds to the geography and structure of deliveries:
50% of the portfolio of orders falls on the region of the Middle East and North Africa, followed by China and India.
Over 50% - aircraft, 20% - ground forces, 10% - air defense and navy.

The main sensation: India in 2017 is on the fifth (!) Position on the volume of Russian arms exports. 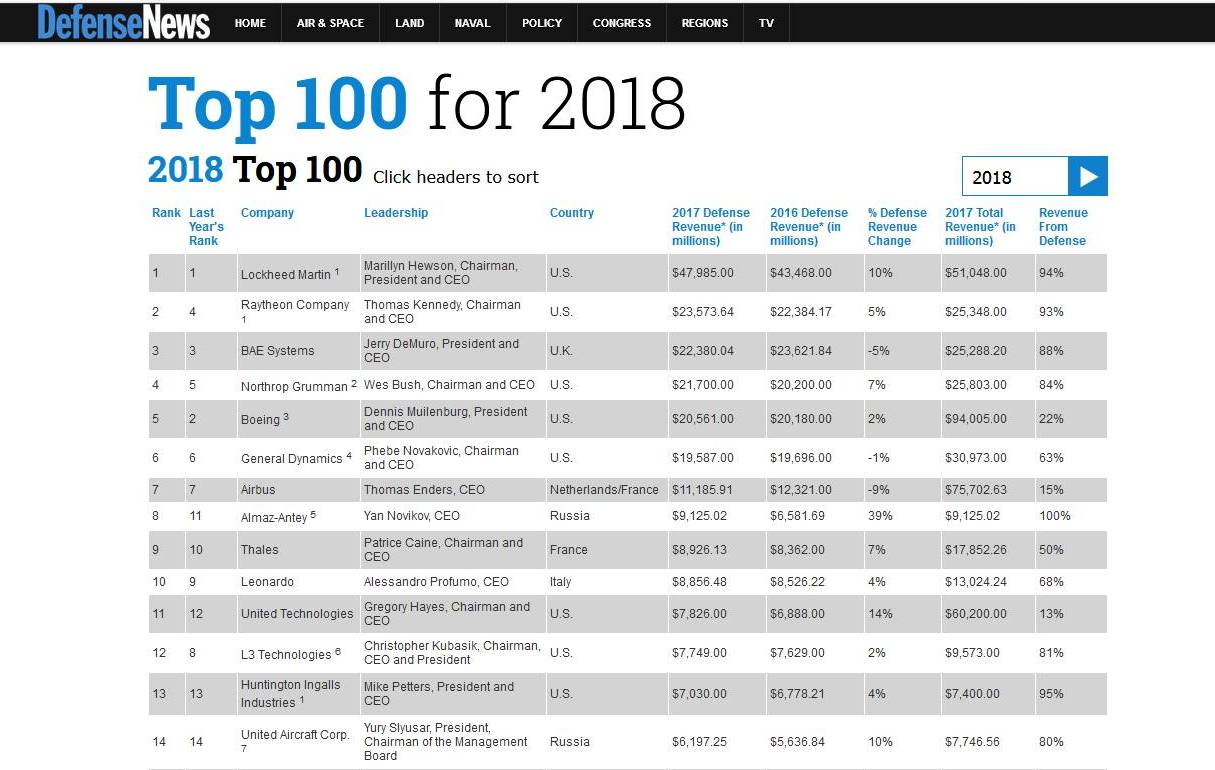