Aircraft carrier INS Vikramaditya will sail out of the harbour in Karwar after its first short refit and join the Navy in a week, Vice-Admiral P. Murugesan, Vice-Chief of the Naval Staff, said here on Tuesday.He was briefing presspersons on a seminar, “Innovation and indigenisation — sailing towards self-reliance” being organised by the Navy on Thursday and Friday.

Vikramaditya, acquired from Russia for $2.3 billion, was commissioned into the Navy in November 2013 without the crucial air-defence systems. They are now being installed during the “guaranteed refit”, in addition to scheduled maintenance, by the original equipment manufacturer.

The Israeli-supplied Barak-1 point defence missile system and the Russian-origin AK-630 close-in weapon system, borrowed from a to-be-decommissioned Godavari-class ship, were installed on the carrier.

The carrier was originally scheduled to receive a long-range surface-to-air missile system under joint development with Israel. But delay in its development resulted in the carrier being inducted without its own air-defence cover.

Vice-Admiral Murugesan said a high-powered committee constituted to evaluate domestic shipyards for the Navy’s next line of submarines under Project 75I had completed its compliance checks.

“The report has been submitted to the Defence Ministry,” he said.

Tenders will be issued to the shortlisted shipyards once it is approved. Under Project 75I, estimated at over Rs. 50,000 crore, six conventional submarines are to be built by domestic shipyards with foreign collaboration.

In November 2013, the refurbished Vikramaditya, formerly known as the Admiral Gorshkov, was commissioned by India for a record-breaking $2.35 billion after almost a decade of negotiations with Russia since the initial $947 million deal for the purchase of the ship was signed in 2004. 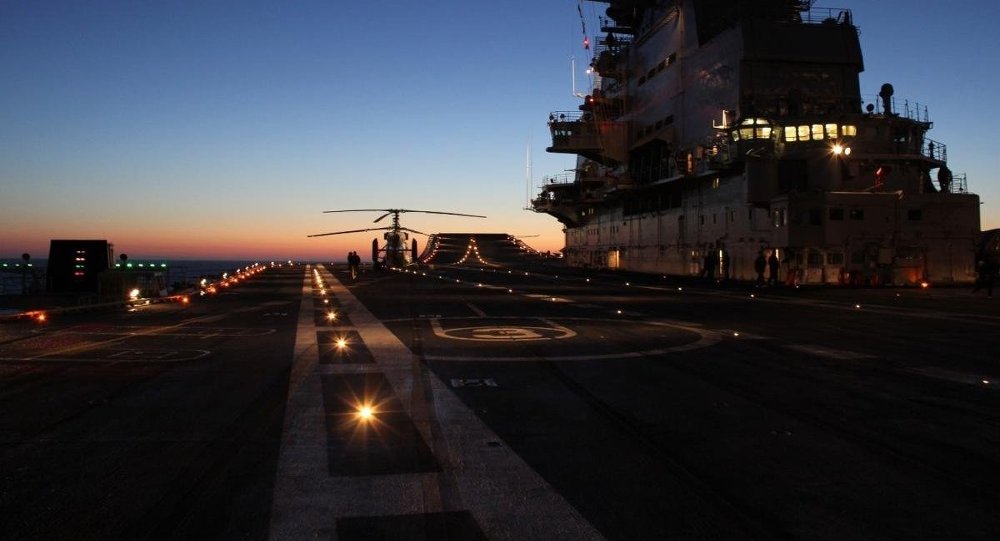 Russia May Become Partner in India's Aircraft Carrier Project
"At that time, the Indians refused to install Russian air defense systems on the Vikramaditya, but we have reserved space there for our air defense systems… This is allowed under our contract," Vlasov told RIA Novosti.
Along with the aircraft carrier, India also bought 12 single-seat MiG-29Ks and four two-seat MiG-29KUBs for $526 million.

In 2015, representatives of the Russian Sevmash shipbuilding company and the Indian Navy signed a contract for technical assistance in the maintenance of the aircraft carrier during the period not covered by warranty.

VKD (Indian Navy's official call for INS Vikramaditya) with its completely refurbished propulsion plant have shown its worth during the trial and in service and highlights the quality of work done by the contracted unit - Kirovsky Zavod.

Kuznetsov is likely to undergo same refurbishment to its propulsion system and new boilers are likely to come from Baltisky Zavod. Check out their website if they have got any new orders for boilers, if we see any updates from Baltisky Zavod on boilers in the next 12-18 months we can be sure that Kuznetsov will be getting those same units as on VKD.

On November 16, the "Vikramaditya" aircraft carrier was transferred to the Indian Navy. Kirovsky Zavod had carried out modernization of ship's energy equipment.

The General Director of the Kirov Group, Georgy Semenenko, and the Deputy General Director, Mikhail Tikhonenko, took part in the ceremony of the handing over of the ship to the navy of the Republic of India. The Vikramaditya had been reconstructed from the heavy aircraft carrier Admiral Gorshkov of the Russian Navy. The ship underwent a thorough modernization at OJSC PO Sevmash.

Kirov-Energomash (a subsidiary of the Kirov Group) rebuilt the entirety of the ship's energy equipment, manufactured all necessary parts, instruments, accessories, and compiled all the necessary operational documentation. Most parts and units were upgraded on the grounds of Kirovsky Zavod in St. Petersburg. Plant specialists disassembled, inspected, and repaired the high- and low-pressure turbines, the reduction gear, the regulation, control, and safety systems, and the turbo-circulatory, turbo- and electric oil pumps. The charging turbine sets were also replaced.

The ceremony was also attended by: the Russian Deputy Prime Minister, Dmitry Rogozin; the Chief of Staff of the Russian Navy Admiral, Viktor Chirkov; the President of the OJSC Joint Shipbuilding Corporation, Vladimir Shmakov; and the General Director of OJSC PO Sevmash, Mikhail Budnichenko. The Indian delegation at the event was headed by Minister of Defense, Arackaparambil Kurien Antony, and he was accompanied with several other representatives of the Indian military.

Two killed on board INS Vikramaditya after gas leak

Two persons, including a civilian worker, died on board aircraft carrier INS Vikramaditya after a toxic gas leak on Friday.

The incident took place around 5:00 PM while the ship was undergoing maintenance work at Karwar. Four persons, including two naval sailors and two civilian workers, inhaled toxic gas while maintenance work was being undertaken in the Sewage Treatment Plant (STP) Compartment. They were immediately taken to the Naval Hospital in Karwar.

Sailor Rakesh Kumar and Shri Mohandas Kolambkar, an employee of M/s Royal Marine, succumbed due to inhaling the toxic gas. The condition of the other two personnel is said to be stable. The Navy has ordered an inquiry into the incident.

India's solitary aircraft carrier, INS Vikramaditya, will be ready for action only after eight months due its ongoing maintenance refit

Indigenous aircraft carrier, INS Vikrant, will be ready only by 2023

NEW DELHI: India thinks of itself as an emerging superpower but does not have a single operational aircraft carrier+ as of now. Its solitary aircraft carrier, INS Vikramaditya+ , will be ready for action only after eight months due its ongoing maintenance refit.

More alarmingly, the 44,570-tonne INS Vikramaditya+ will in all probability have to soldier on alone for the next six-seven years. In its report tabled in Parliament on Tuesday, the CAG said the already long-delayed 40,000-tonne indigenous aircraft carrier, INS Vikrant+ , will be ready only by 2023 as per its constructor Cochin Shipyard+ .

Nothing projects raw combat power like an aircraft carrier prowling on the high seas, ready to unleash its fighter jets and missiles against any adversary. So, whenever the US launches a military strike, or flies the flag against a belligerent China+ in the South China Sea+ , it turns to its 10 Nimitz-class nuclear-powered "super-carriers" deployed around the globe. China, too, visualises aircraft carriers as "symbols of a great nation".
India, however, continues to flounder in first formulating and then executing longterm strategic plans in tune with its geopolitical aspirations. The Navy for long has been demanding three aircraft carriers, one each for the western and eastern sea-boards, with the third being under refit at any given time. But the CAG report, with a detailed critique of the shoddy planning and project execution in INS Vikrant's construction, junks the notion of even a two-carrier force till 2023.

Moreover, the report says the MiG-29K fleet - India ordered 45 fighters from Russia for $2 billion for INS Vikramaditya and INS Vikrant - is "riddled with problems" due to defects in the fighter airframes, RD-33 MK engines and fly-by-wire systems. Consequently, the serviceability or operational availability of MiG-29Ks is pathetic - ranging from just 15.93 per cent to 37.63 per cent.

The Navy, however, is quite confident of getting INS Vikrant, which was first approved in May 1999 with its construction beginning in November 2006, by December 2018. "INS Vikrant will not have its Russian aviation complex (aviation armaments, mobile systems, arresting gear, hydraulic stations and other equipment) and the Barak-8 long-range surface-to-air missile systems by then. But we are planning sea trials from 2018 onwards," said a senior officer.

Even if the carrier is delivered by 2018-2019, it will not be able to operate MiG-29Ks from its deck without the aviation complex, nor be able to effectively protect itself without the Barak-8 missile system+ .

As was first reported by TOI, defence minister Manohar Parrikar has put further orders for the Barak-8 systems designed by DRDO-Israel Aerospace Industries+ , with an over 70-km interception range against incoming enemy aircraft, drones and missile, on hold due to the high costs involved.

The CAG, on its part, says, "There is contuing disagreement over project timelines between the Navy and Cochin Shipyard, with realistic dates for delivery yet to be worked out." 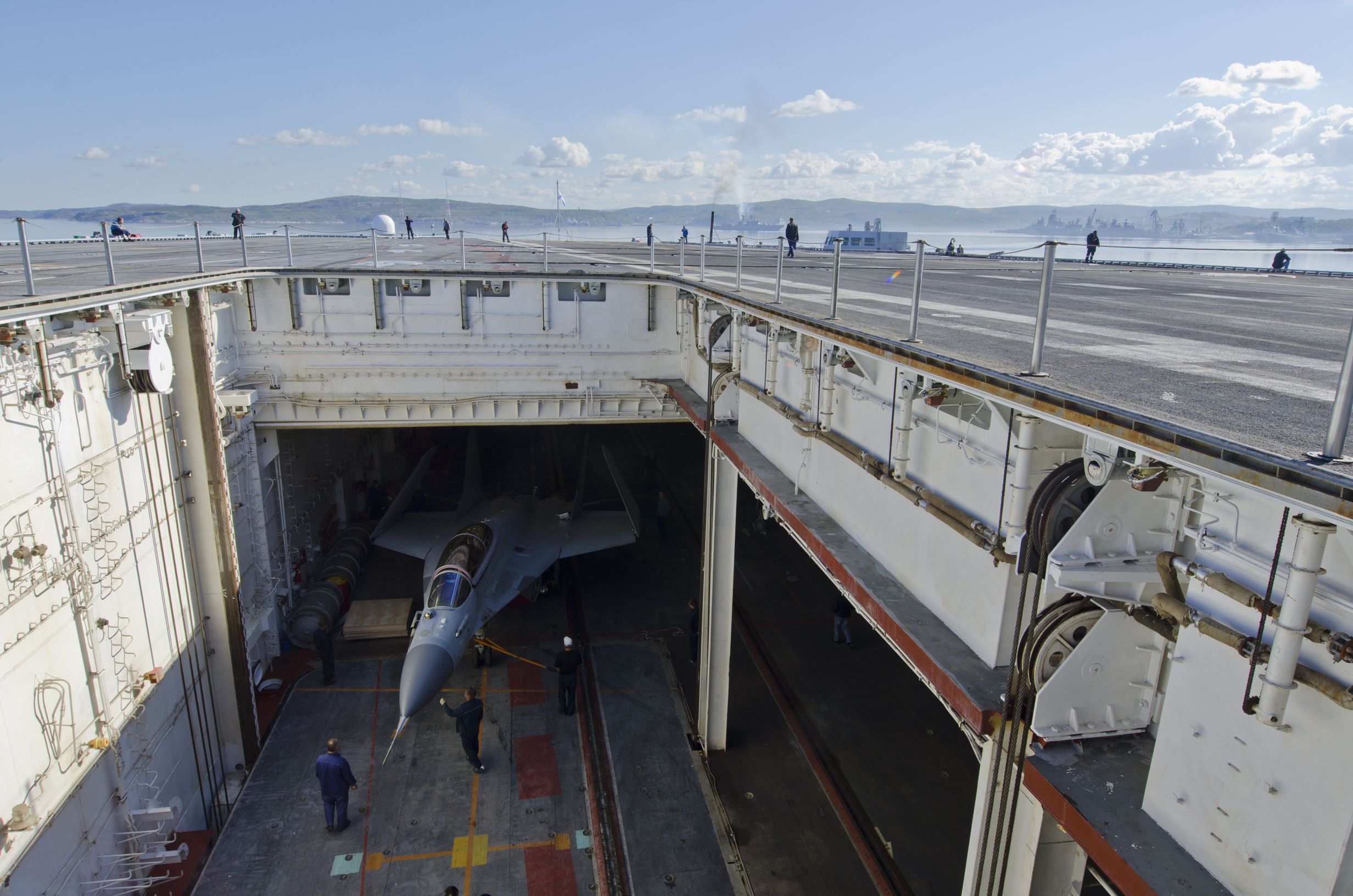 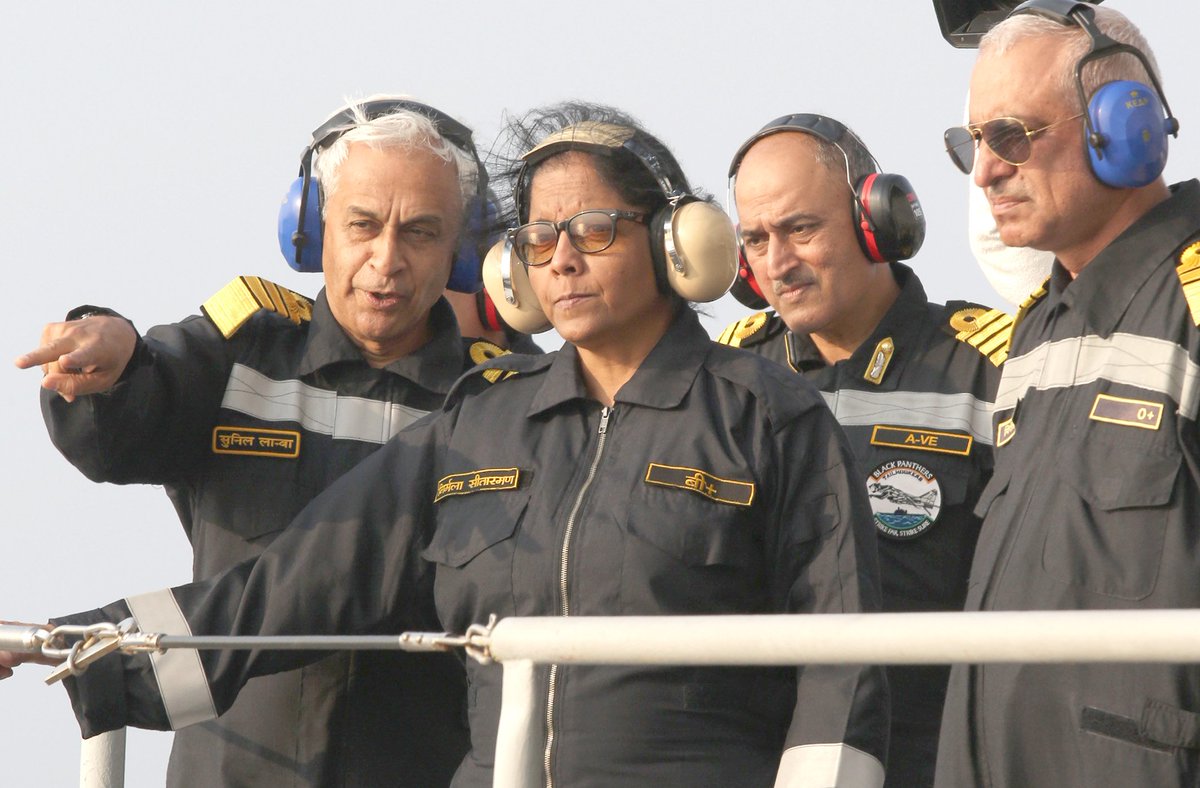 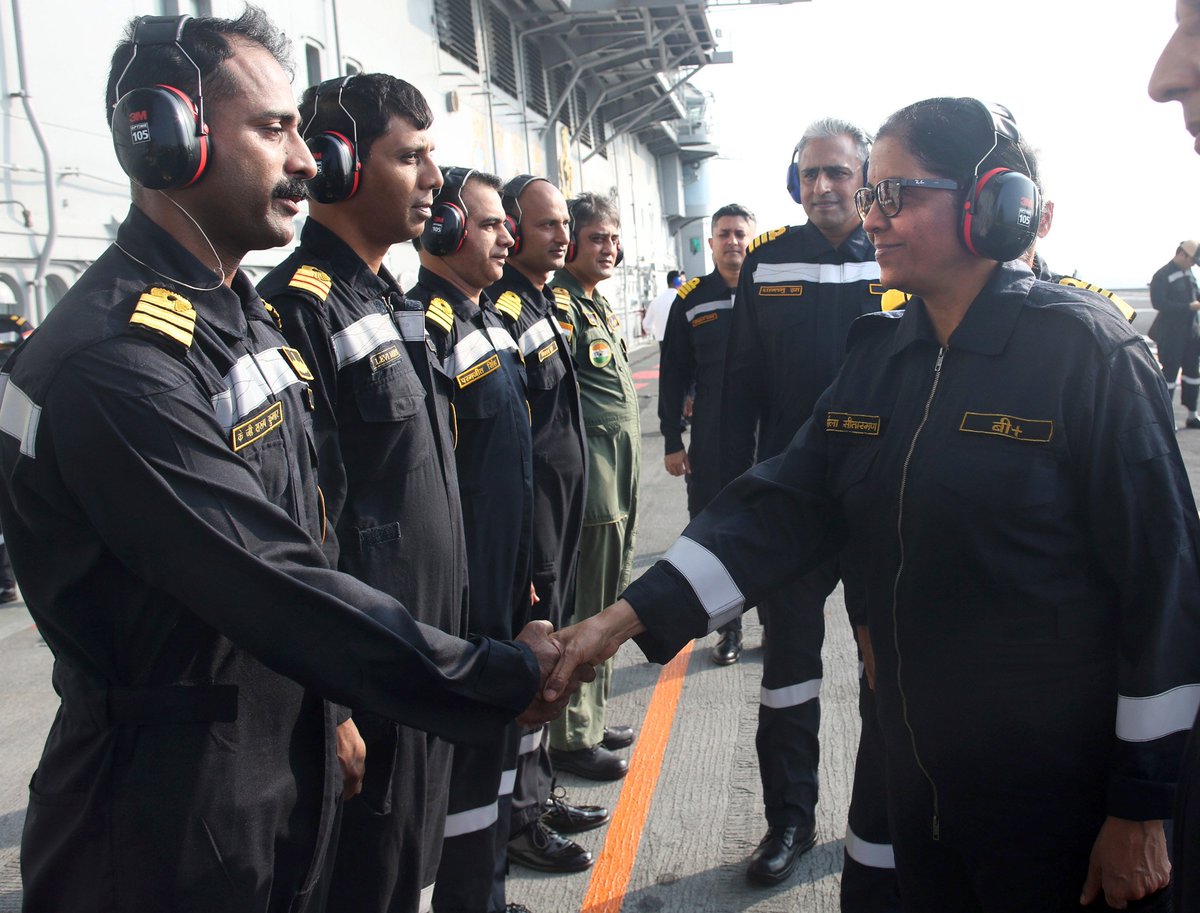 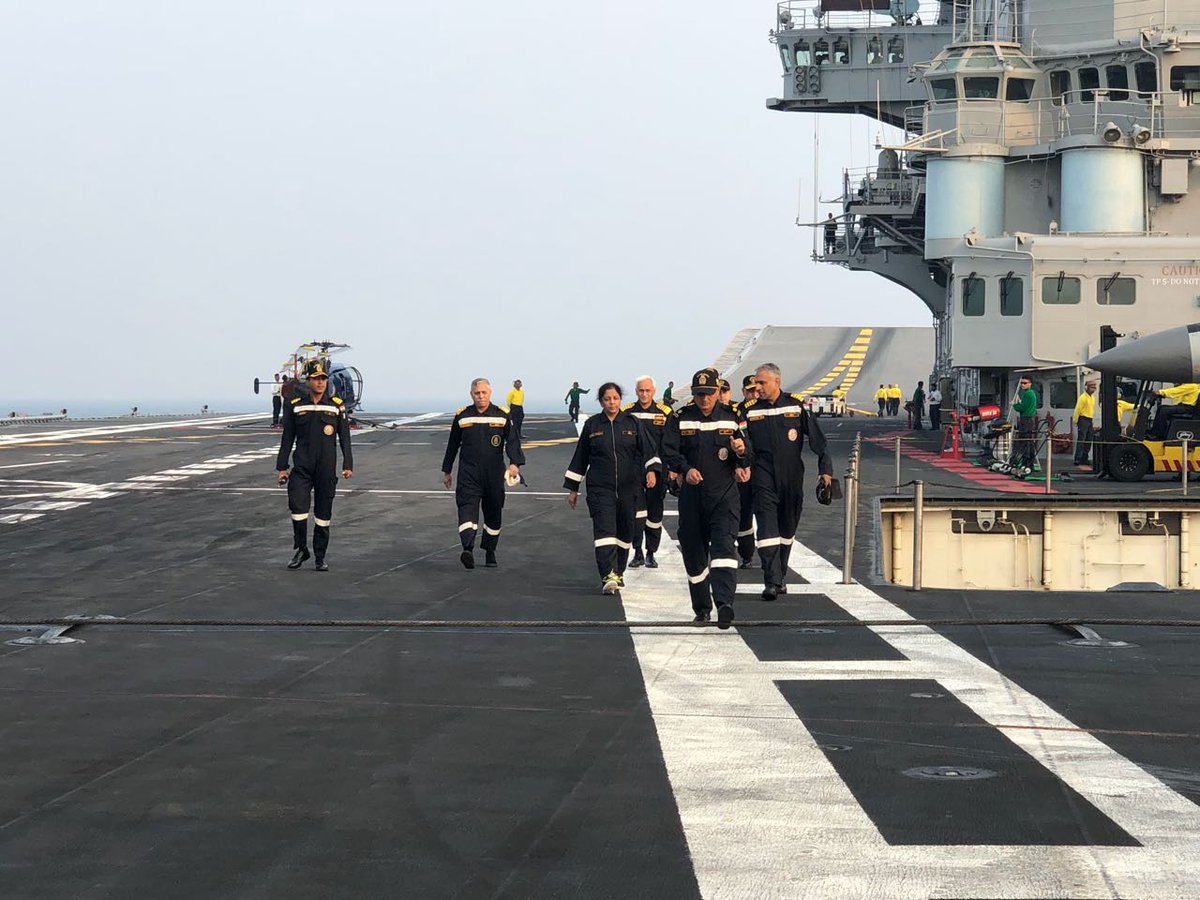 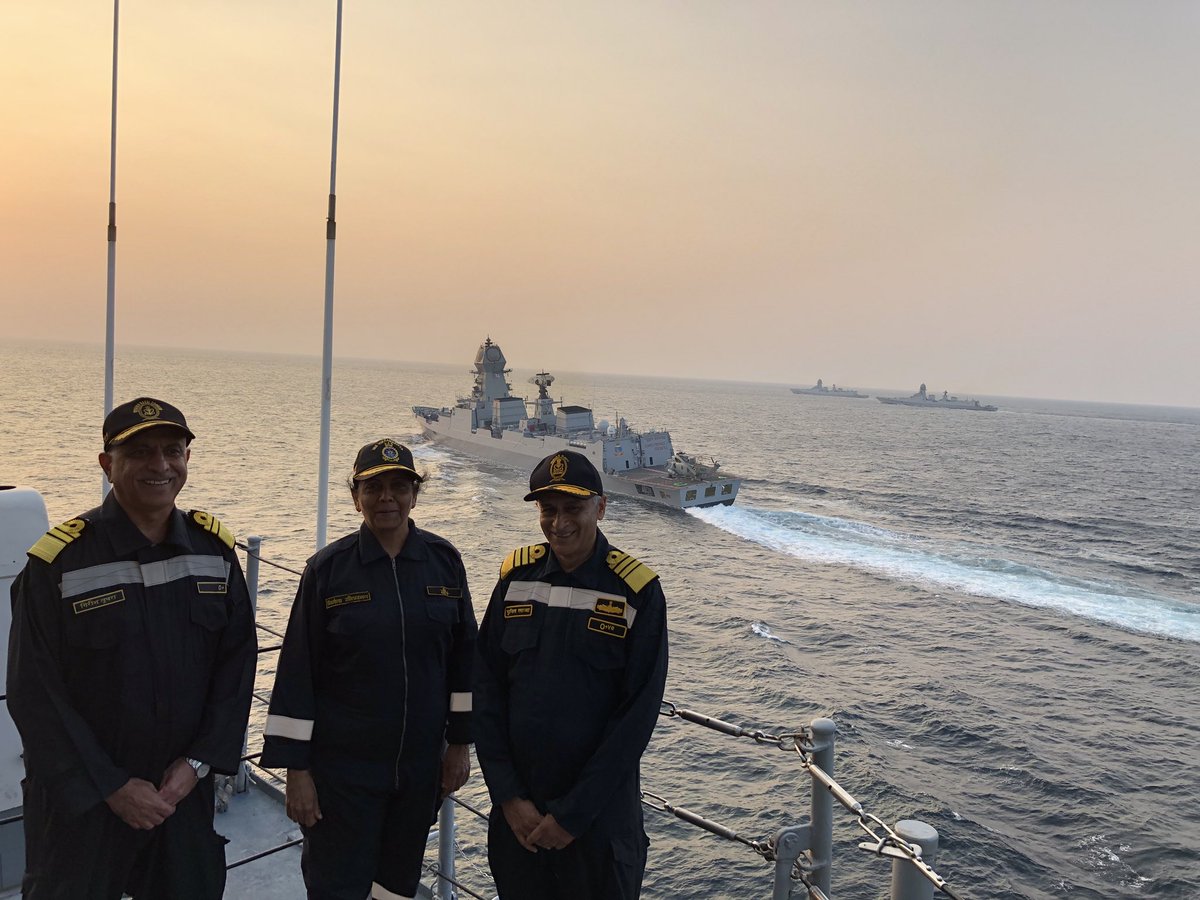