George1 wrote:These planes were the last of the orders above (97+12). I think Yak-130 number in service must be 105 because 4 have been lost to accidents (if i am right)

Yes, the number delivered are 109 and 4 lost in crashes.
However the most of survivors of the first bath of 12 are not in service, were stored at Borisoglebsk, that have a total of 40 but in theory have only two squadrons of 16
Recently several of these Yak-130 of first batch have been sent to Kubinka for repair and retrun to service

Thus it became the third training aviation base that received the Yak-130 training and combat aircraft after the KVVULL training air bases in Borisoglebsk and Armavir.

Presumably, the Kushchevskaya airbase received ten Yak-130 airplanes built in 2018 by the Irkutsk Aviation Plant (IAP) of Irkut Corporation PJSC with red hull numbers from “30” to “39”, transferred to VKS from June to October 2018.

In total, to date, the Russian Ministry of Defense has received 109 Yak-130 serial aircraft - of these, 12 of the first two series were built at the Nizhny Novgorod Aviation Plant Sokol, and another 97 at the Irkutsk Aviation Plant. Of this number, according to available data, as part of the KVVAUL aviation base in Borisoglebsk, there are now 40 Yak-130 airplanes (including eight actually unexploited Nizhny Novgorod built vehicles), and 45 aircraft in the KVVAUL aviation training base in Armavir KVVAUL air base in Kushchevskaya. Also, according to available information, eight Yak-130 airplanes are in Akhtubinsk. Another four airplanes are lost in flight accidents and two aircrafts built in Nizhny Novgorod are used as ground-based training aids.

As reported on August 7, 2019, JSC 121 Aviation Repair Plant (Kubinka, Moscow Region), it successfully completed flight tests of the first combat trainer Yak-130 after repair at the enterprise. The aircraft is fully operational and will be handed over to the customer in the near future. 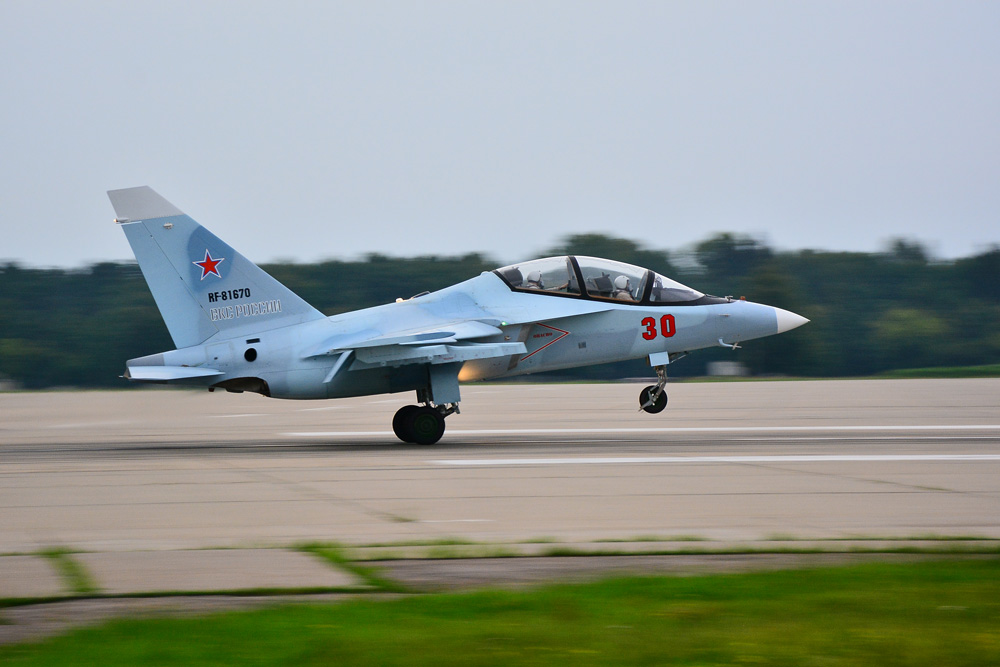 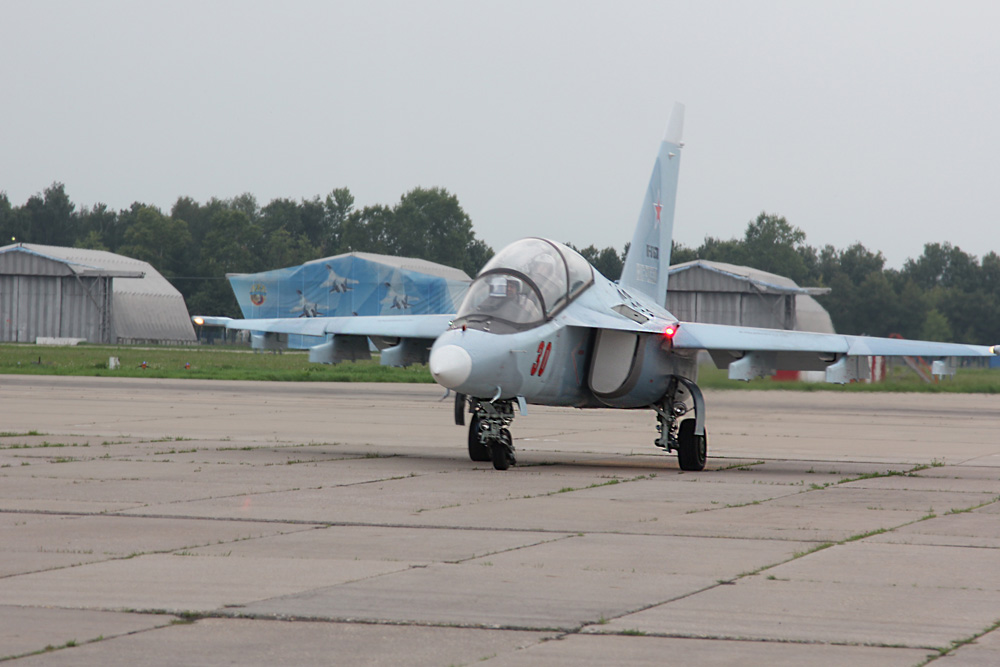 
Comment by bmpd. Thus, JSC 121 Aviation Repair Plant successfully mastered the repair of the Yak-130 aircraft and completed the repair for the Russian Aerospace Forces of the first aircraft of this type, which is a significant milestone in the history of the Yak-130. Judging by the photographs, the first repaired Yak-130 was a plane with tail number "30 red" (former "30 white", the former, presumably, board "92" red, serial number 01-01) - one of three received on 121- th ARZ in 2017, Yak-130 aircraft (the original white tail numbers are "21", "24" and "30"), belonging to 10 aircraft of the first production series built at Sokol Nizhny Novgorod Aviation Plant JSC in 2009-2010 , and recent years in storage. As you can judge, this aircraft is the first Yak-130 built on the Sokol and the first production Yak-130 aircraft in general.

Is this a repaired from damage etc or upgraded aircraft?
franco

The first 10 built were defective and production moved to another plant. They have been sitting in storage until now. The why and what is unknown.
JohninMK

The first 10 built were defective and production moved to another plant. They have been sitting in storage until now. The why and what is unknown.

The first 10 built were defective and production moved to another plant. They have been sitting in storage until now. The why and what is unknown.


https://iz.ru/645772/nikolai-surkov/rossiiskie-vks-polnostiu-osvoili-samolety-transformery
"The Yak-130 was the first combat training aircraft created in modern Russia. He was called to replace obsolete imported cars, primarily the Czechoslovak L-39. The first order for 12 Yak-130 Ministry of Defense placed back in 2005, and in 2011 55 of these aircraft were ordered immediately…"

What is their domestic price ?
AMCXXL

Isos wrote:What is their domestic price ?

I dont know, but in basic versión for training, probably not more than a Ka-52
Cyberspec

Belarus - interesting is they are arming their yak-130 with talisman and previous pics of them armed suggests Belarus are not just going to use them as trainers but as multi role combat aircraft. Can't blame them considering their current Air Force.


"a contract was signed with Irkut Corporation to retrofit the Yak-130 aircraft for the installation of the Belarusian-made Talisman airborne defensive suite.

d_taddei2 wrote:Belarus - interesting is they are arming their yak-130 with talisman and previous pics of them armed suggests Belarus are not just going to use them as trainers but as multi role combat aircraft. Can't blame them considering their current Air Force.


"a contract was signed with Irkut Corporation to retrofit the Yak-130 aircraft for the installation of the Belarusian-made Talisman airborne defensive suite.

Obvious thing to do, its not the first time a trainer goes multirole.

The problem is the Yak-130 is not really a cheap aircraft... the concept of a LIFT fighter (lead in fighter trainer being used as a light fighter) is that you have them anyway and you can justify their higher price by using them for other roles like light strike and short range air defence.

The problem is that while expensive for a trainer, they are not super useful as a light strike aircraft... especially when you have an Su-25SM3 in service that would be much better suited to light strike roles. As a light interceptor with a radar and a self defence electronic pod it would be useful against third world country fighters like unupgraded MiG-21s etc, and for airspace patrol on the cheap, but for interception of serious targets it is simply too slow... you would need to probably replace the two engines with a single more powerful engine with AB to make it supersonic... but that sort of upgrade (most of the avionics would be fine, but engine, radar, and probably a self defence electronics pod and probably some sort of navigation and targeting pod too) is going to radically change the aircraft so it really wont be able to be used as a trainer any more.

If you make less changes to keep the costs down... well a cheaper model medium fighter like a MiG-29M2 would make more sense in terms of better performance all round and probably not that much more costly to operate.

Using them as trainers obviously makes sense... that is what they are designed for, but trying to make them a substitute numbers aircraft is just dumbing down the fleet... Su-25s for strike and MiG-29M2s for the numbers fighter role make rather more sense... especially over time when AESA radar elements become cheaper and are mass produced in enormous numbers... retro fitting them to your numbers fighter means a significant upgrade in quality at minimum cost.

For air forces other that Russia a light fighter version of the Yak makes rather more sense because they wont already have Su-25s or MiG-29s... in fact they could probably just use them as armed aircraft with an upgraded model with a single more powerful engine and radar with targeting/navigation pods and ESM pods, while the standard trainer with twin engines and no radar which would be much cheaper, but still using the targeting/nav pods and ESM pods would be a useful day fighter platform as well as advanced jet trainer.
George1

According to spotters, on February 13, 2020, during an intermediate landing in Novosibirsk at Tolmachevo Airport, two new Yak-130 combat training aircraft were shot taking off from Irkutsk Aviation Plant (IAZ) of Irkut Corporation PJSC to the European part of the country to the Krasnodar Higher Military Aviation School for Pilots (KVVAUL) named after A.K. Serov. The aircraft have red side numbers "01" and "02" and became the first Yak-130 received by the Russian Air Force since October 2018.

Presumably, the planes should be part of the KVVAUL training aviation base in Kotelnikovo (Volgograd Region), and will be the first Yak-130 as part of this air base. The base in Kotelnikovo will be the fourth training aviation base to receive Yak-130 combat training aircraft, after the training air bases of the same KVVAUL in Borisoglebsk, Armavir and Kushchevskaya. The Ministry of Defense of Russia announced on January 29, 2020 that the new Yak-130s were received at IAZ by KVVAUL specialists.

According to available information, the two Yak-130s are the first aircraft of this type built under an additional contract for the supply of several Yak-130 units concluded by the Russian Ministry of Defense with PJSC Irkut Corporation in 2019. Both aircraft were actually built at IAZ back in 2019 and circled back in November, but transferred to the KVVAUL only now.

Earlier, from 2009 to 2018, the Russian Ministry of Defense received 109 Yak-130 aircraft under various contracts - of which 12 of the first two series were built at Sokol Nizhny Novgorod Aviation Plant, and 97 more at the Irkutsk Aviation Plant. 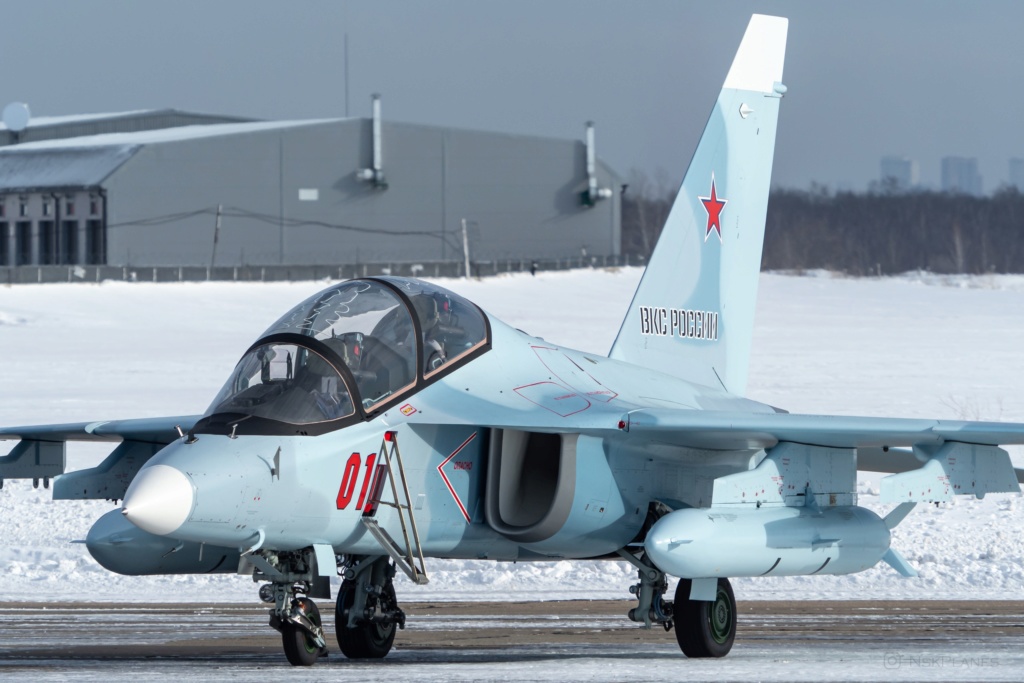 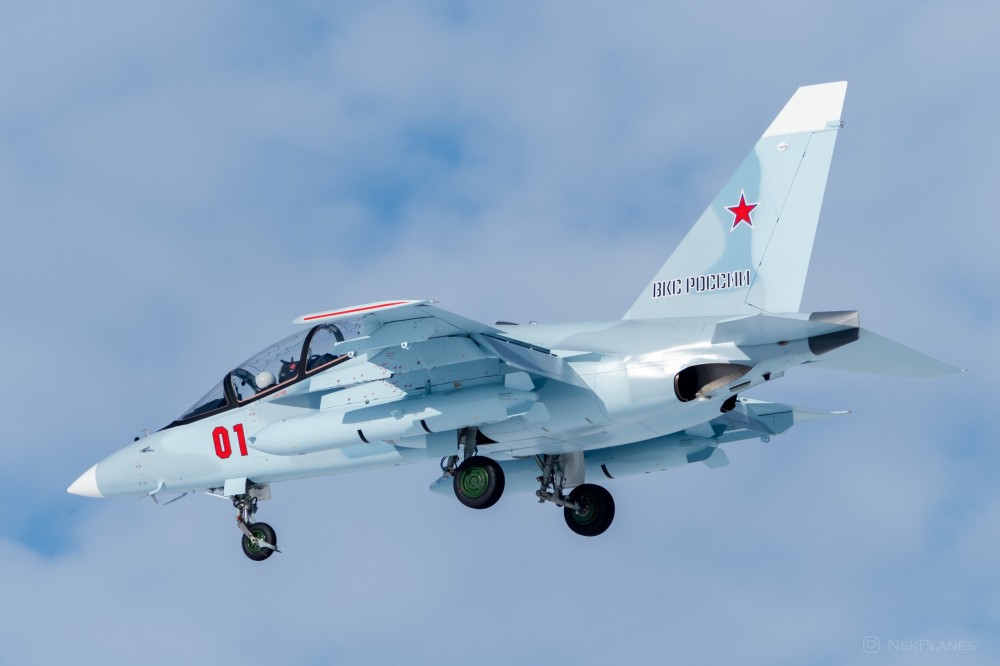 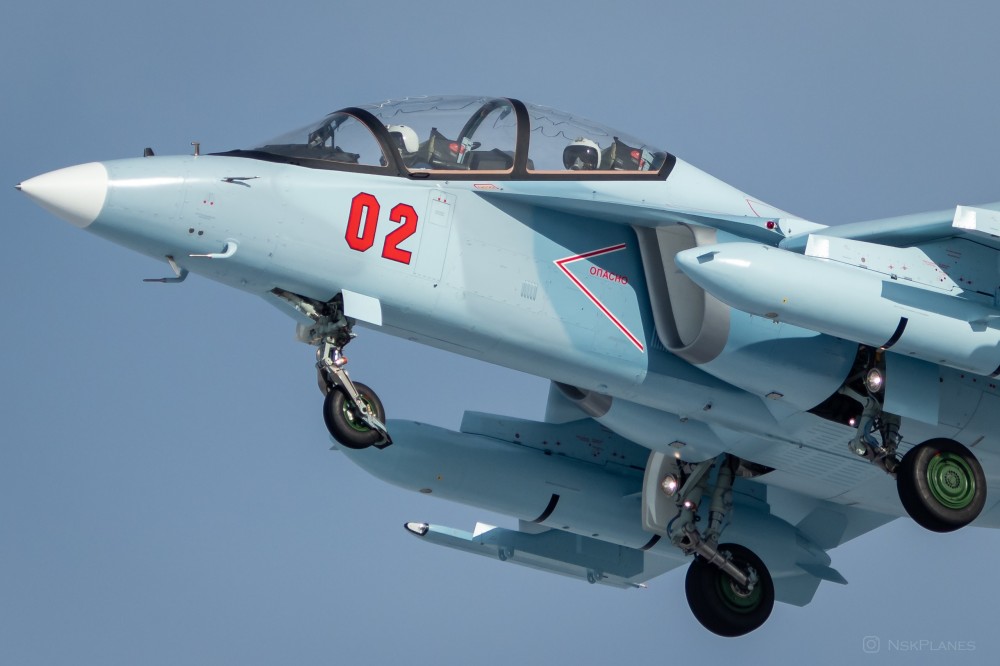 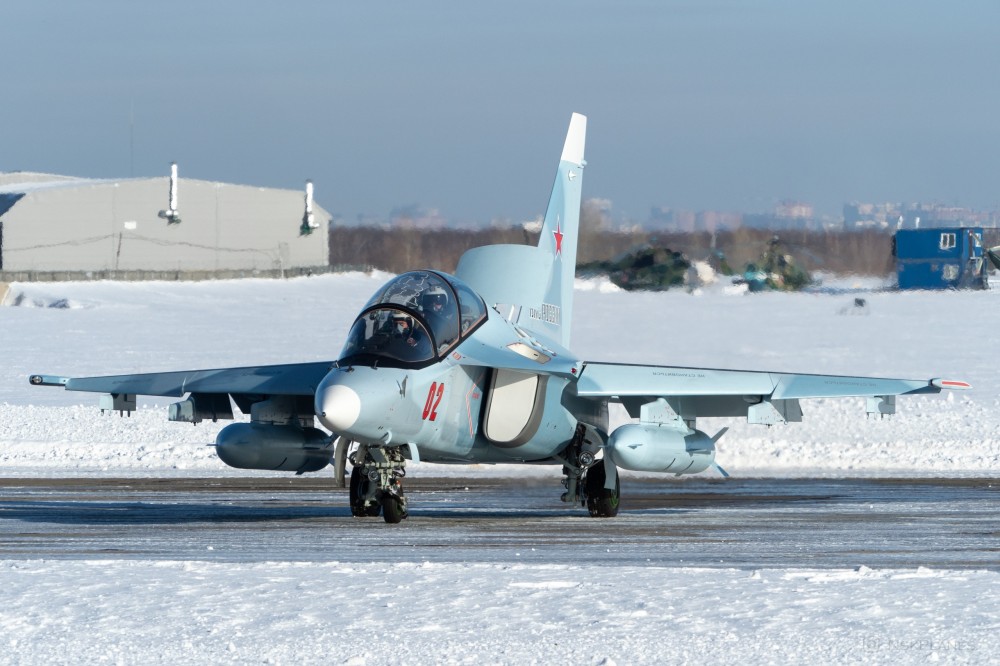