MOSCOW, July 23. /TASS/. Rearmament of Russia’s Strategic Missile Forces (RVSN) with the newest Yars mobile missile system is planned to be completed by 2021. Russian Defense Ministry’s spokesman for RVSN Dmitry Andreyev told TASS on Thursday that a division of the Yoshkar-Ola RVSN formation will be transferred to the Yars system in 2016.

Yars is the result of modernization of the Topol system to destroy enemy’s stationary strategic targets with the RS-24 missile. It has increased total power of multiple warheads, equivalent to 45 US atomic bombs dropped on Hiroshima.

On Tuesday, advisor to the RVSN commander Viktor Yesin said that all missile divisions of Russia’s Strategic Missile Forces would be rearmed with the Yars and Yars-M mobile ground missile systems with the RS-26 missile in 2021. "The process of rearmament of all missile divisions, which now use the Topol missile complex, with the Yars mobile missile system and Yars-M system, which is sometimes called Rubezh, with the RS-26 missile, is planned to be completed in 2021. By that time the Topol mobile missile system will be withdrawn from service," Yesin said.

According to him, the Topol missile system is currently in service with 7 RVSN divisions of the total 12. "The Teikovo missile division has been rearmed with the Topol-M and Yars missile systems now. Its rearmament has been completed," he said.
Viktor

Complexes "yars" in Russia will imitate holograms to disguise
George1

George1 wrote:Yars ICBM deployment will continue in 2016 with 5 regiments

Interesting, since Irkutsk was expected to receive RS-26(http://tass.ru/politika/1290469).The total number of new missiles, according to Karakayev, is about 20.
max steel

Now that the first regiment of silo-based RS-24 Yars missiles in Kozelsk had been completed, Rosspetsstroy began conversion of ten more silos for Yars missiles. According to Rosspetsstroy, two out of ten silos will be ready for service by the end of 2016.
George1 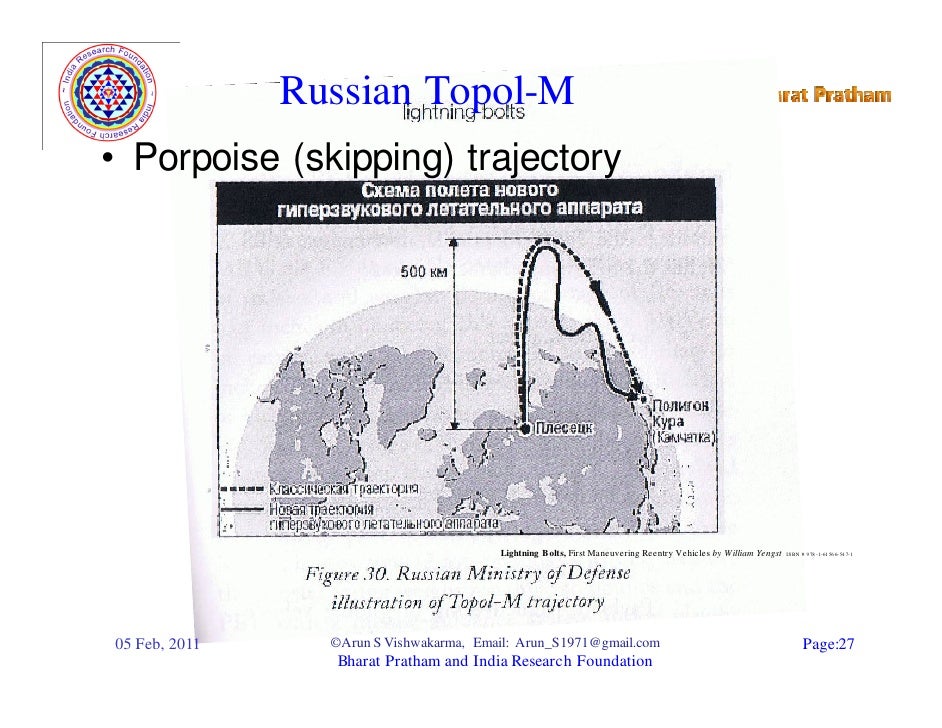 Some of the forum members need to see this to put some 'questions' to bed...

In the images non-manoeuvring trajectory is also given which exactly what a Ballistic Missile follows. Any idea are they showing the conventional trajectory to compare or it belongs to Old still in service Russian ICBMs. Any Idea what trajectory does Minuteman-III follow ? Same manoeuvrable one ?

The only land-based ICBM in service with the United Stated is the LGM-30G Minuteman III. Each missile carries one W87 warhead with a capacity of up to three hundred kilotons (though it can carry up to three warheads). The last missile was produced back in 1978, meaning that the “youngest” is thirty-eight years old. The missiles have been upgraded many times, and are intended to be used until 2030. The latest missile, the LGM118A Peacekeeper, was deployed in 1986, but all fifty of them were removed from combat duty on a unilateral basis by 2005—and it is safe to say that the LGM118A Peacekeeper was an improvement in comparison with the Minuteman III, because the Peacekeeper could carry up to ten warheads. Despite the failure of the Start II Treaty, which banned the use of MIRVs, the United States gave up MIRVs on its own. Its credibility was lost because of the high price, and the scandal in which it was revealed that the missiles were lacking AIRS guidance systems for almost four years (1984–88).

Russia will replace the Topol missile (essentially equivalent to the Minuteman III) by 2020, with the newest missiles, which are specifically designed to penetrate enemy missile-defense systems.
Austin

My Write Up on Yars ICBM

my short write up on RS-24 Yars

what do you think about Rubezh is it really modular system ble to be configured as both IRBM and ICBM?

GunshipDemocracy wrote:what do you think about Rubezh is it really modular system ble to be configured as both IRBM and ICBM?

Austin wrote: Don't want to speculate on Rubezh except  that its a next gen system and  its an icbm

indeed it can be also used as an ICBM nonetheless how many ICBMs were tested on 2,000km distances? it is smaller and lighter than yars. I would be surprised if in wake of U$ amd build up, aggressive NATO regimes´expansion Russia did not have some nice surprise for "partners" I hope Rubezh will fulfill niche of Pioneer IRBM
George1

A Russian missile regiment rearmed with RS-24 Yars missile will take up duty in December, Col. Yury Sytnik, Commander of the 29th missile division of the Russian Strategic Missile Forces, said on Friday.

"In December 2016, the 92nd missile regiment equipped with the mobile-based RS-24 Yars missile complex will take up duty after it is put in operation and placed on alert," Col. Sytnik said during the unified military goods commissioning day.

MOSCOW, September 20. /TASS/. Russia’s westernmost ICBM division near Bologoye will be re-armed with the missile system Yars, the Defense Ministry has told TASS.

"The westernmost strategic missile force division in the Tver region will soon begin to be rearmed with the missile system Yars. It will be a sixth strategic missile division where the newest mobile ground-based missile complexes will replace the intercontinental ballistic missile Topol," the press-service of the Strategic Missile Force quotes its commander Sergey Karakayev as saying.

The new base answers the question of where did all the Yars missiles deployed in Nizhniy Tagil in 2013 and in 2014 go. Some were deployed at the base built at the "21st ploshchadka", the home of the 308th regiment (it was said to have been disbanded in 2004, though). But there was also good evidence that the 804th regiment received Yars missiles as well. However, the images taken at the site in June-September 2014 showed dismantled shelters, but no new construction. They must have waited in a shelter somewhere.

RS-24 Yars is replacing Topol in Vypolzovo and elsewhere

The information department of the ministry of defense quotes the commander of the Strategic Rocket Forces, Sergey Karakayev, as saying that RS-24 Yars missiles will soon be deployed in Bologoye division, also referred to by its treaty name Vypolzovo or as the 7th guards missile division. According to Karakayev, one of the Topol regiments has just completed its final exercise (of which the September 9 launch appears to be a part). He seems to suggest that after the exercise all Topol missile have been withdrawn from service.

Karakayev also said that in 2016 the conversion to RS-24 Yars began in Irkutsk and Yoshkar-Ola divisions and was almost completed in Novosibirsk and Nizhniy Tagil. It has been fully completed in Teykovo.

Indeed, the work in Nizhniy Tagil can be now seen on satellite images. If it is "almost completed," then it's possible that the conversion will stop after three regiments there received Yars missiles. We will see.

The only division not affected by conversion yet is the 35th missile division in Barnaul. All its four regiments (described earlier) appear to be operational.

Comment bmpd. Thus, by the end of 2016, armed with Russian Strategic Missile Forces must be presumed, 96 launchers for the missile complex RS-24 "yars" (presumably, 78 silo and 18 mobile).

Ok but these are a new design warhead ? or old warhead from withdram ICBM such as RT-23 or SS-19 ? Russia has in store a lot of RV?
Sponsored content