i wonder if production of su-25 could be restarted.
George1

ARZ in Yevpatoriya handed over to the customer the first repaired Su-25, tail number 34 red. Five more cars are in operation..

The overhaul began in the early 90s by order of the Ministry of Defense of Ukraine. 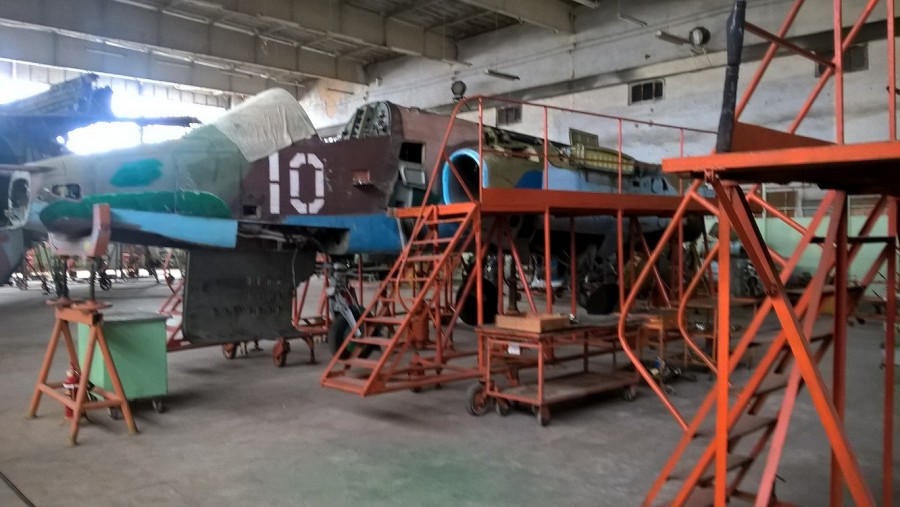 Our blog previously reported that the State Unitary Enterprise of the Republic of Kazakhstan "Evpatoria Aircraft Repair Plant" (formerly 316th aircraft repair plant), along with the resumption of repair of Be-12 amphibious aircraft of the Black Sea Fleet since 2015, has also begun repairing Su-25 VKS attack aircraft Of Russia. It was reported that the first Su-25 attack aircraft was repaired at the plant at the end of 2015 - in the pictures of that time, two Su-25s under repair with white tail numbers "10" and "30" were visible.

They could restart production but why bother? Maybe give MiG the contract for MiG-AT but modern. They need contracts way more than Sukhoi does.
Isos

miketheterrible wrote:They could restart production but why bother? Maybe give MiG the contract for MiG-AT but modern.  They need contracts way more than Sukhoi does.

You can't replace the su-25 with a trainer aircraft. It's a CAS aircraft with armor and huge weapon load (4000kg). Put the armor of the su-25 on those trainers and they won't even takeoff. Don't put the armor and they will be destroyed by 12.7mm gun fire.
miketheterrible

miketheterrible wrote:They could restart production but why bother? Maybe give MiG the contract for MiG-AT but modern.  They need contracts way more than Sukhoi does.

You can't replace the su-25 with a trainer aircraft. It's a CAS aircraft with armor and huge weapon load (4000kg). Put the armor of the su-25 on those trainers and they won't even takeoff. Don't put the armor and they will be destroyed by 12.7mm gun fire.

Yeah, I realized that after I made the mistake as I got Il-102 mixed up with MiG-AT.

I believe MiG did offer an alternative to Su-25 and I think it should be considered.
Hole

The plant in Ulan-Ude produced the double seater of the Su-25 and developed a single seater out of it. 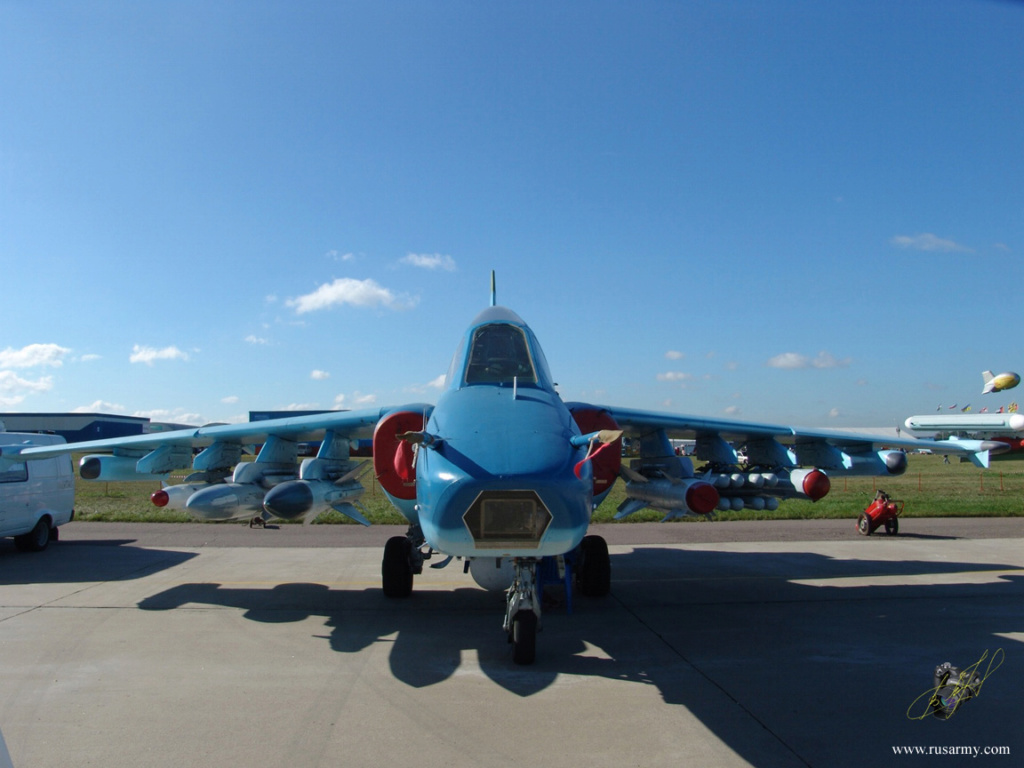 Was called Su-39. Put the modern electronics of the Su-25SM3 into it and start production (if needed).
GarryB

I believe MiG did offer an alternative to Su-25 and I think it should be considered.

Actually the MiG entry was sort of a mix of a MiG-21 with a MiG-27, but with fixed wings and cheek mounted air intakes... it was very much a mish mash of the two designs with no guarantee the best features of each would be present.

It was very much a two horse race, with the smaller more nimble and agile Su-25 being the best choice of the two.

The Il-102 was criticised in the west when first shown in the early 1990s at airshows, but if you actually look at its specs it is more like the A-10... being bigger and heavier with potentially a much heavier weapon load and the capacity to carry a 45mm or 57mm calibre forward firing gun and a rear firing 23mm self defence weapon.

A quick redesign removing the rear gun position and rear gun and using the space for avionics and equipment and perhaps an internal weapon load and you could probably end up with a decent aircraft.

You would need a serious redesign... make the fuselage bigger but move the pilot forward and up a bit to improve forward and downward view and add some nose mounted sensors and equipment and a decent sized belly mounted 57mm gun with ammo where the rear gunner sat... and redesigned wings with better spaced pylons with multiple ejector racks and Hermes launch positions... would be rather interesting I would think...

But then they are talking about a PAK Shkas type anyway...

Certainly the Su-39 would be rather more achievable and with the current upgrades and new technology fitted to the Su-25SM3 and of course the new sensors and weapons fitted to the Mi-28NM and Ka-52 an upgraded two seat model should have plenty of room for new equipment and systems.
Isos

It also has weapon bays or should I say bomb bays. They could make a cheap and stealth version for surprise ground attack keeping only the bomb bays and removing hardpoints, in very limited numbers.

Yeah, but I think the complication is not worth the effect.

It is never going to be stealthy, and the extra drag is not really worth worrying about especially considering the remaining wing pylons generally would carry rocket pods.

Ironically it was the tail gunner and the tail gun and the internal bomb locations that resulted in it being written off by western experts in the early 1990s as being antiquated.

But I would think if you get rid of the tail gunner and the tail gun and fitted a 57mm cannon with a 120 round ammo magazine as fitted on land vehicles like the modified PT-76 in the A-220 turret, and got rid of the internal bomb bays and just had rather long weapon pylons so you could load bombs in tandem under the rather thick and wide wings and use the internal space where the bombs went for extra fuel... shifted the pilots position well forward to give a better view forward and down and replaced the nose with radar and optical sensors from the Ka-52 and Mi-28NM and the Su-25SM3, and fitted rather more powerful turbofan engines minus the after burners you would have quite a potent ground attack aircraft.

But then I think the Su-39 would be easier and cheaper to achieve and with the improvements in sensors and systems and new weapons it will be even more potent today.
GarryB

In the 1990s there was a image shown with a black plastic model with a pusher turboprop design with a straight wing design that looked interesting... 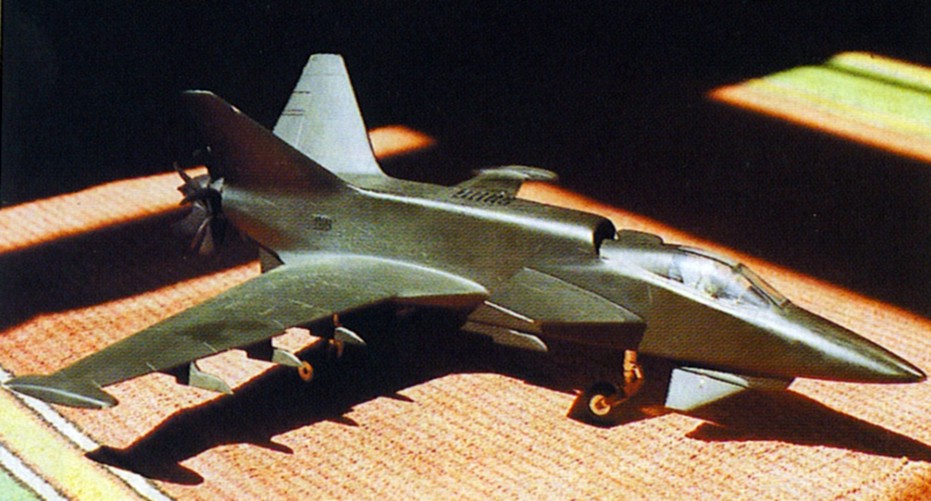 I would make the wings thicker and bigger with less emphasis on top speed, and more on the most ordinance you can get on there and a big gun and weapon pylons able to carry lots of weapons in multiples, but then of course a new CAS just needs to carry rocket pods with guided rockets for awesome fire power...

One 32 shot 57mm rocket pod, and perhaps two 20 shot 80mm rocket pod, and one 5 shot 122mm rocket pod per wing plus an 8 missile pylon for Hermes or that new 25km range missile would make a rather potent loadout most of the time... perhaps a modular centre mount for either a long barrel 30mm cannon or a long barrel 57mm gun depending on the mission and nose mounted radar and optics. A gun that can be angled down up to 45 degrees would be interesting and quite useful...

Of course the last thing they want to do is turn it into a big heavy slow A-10 with too much gun and not enough everything else...
Sponsored content